Tom Cooper, Roelof van der Merwe and the high value of experience for the Dutch 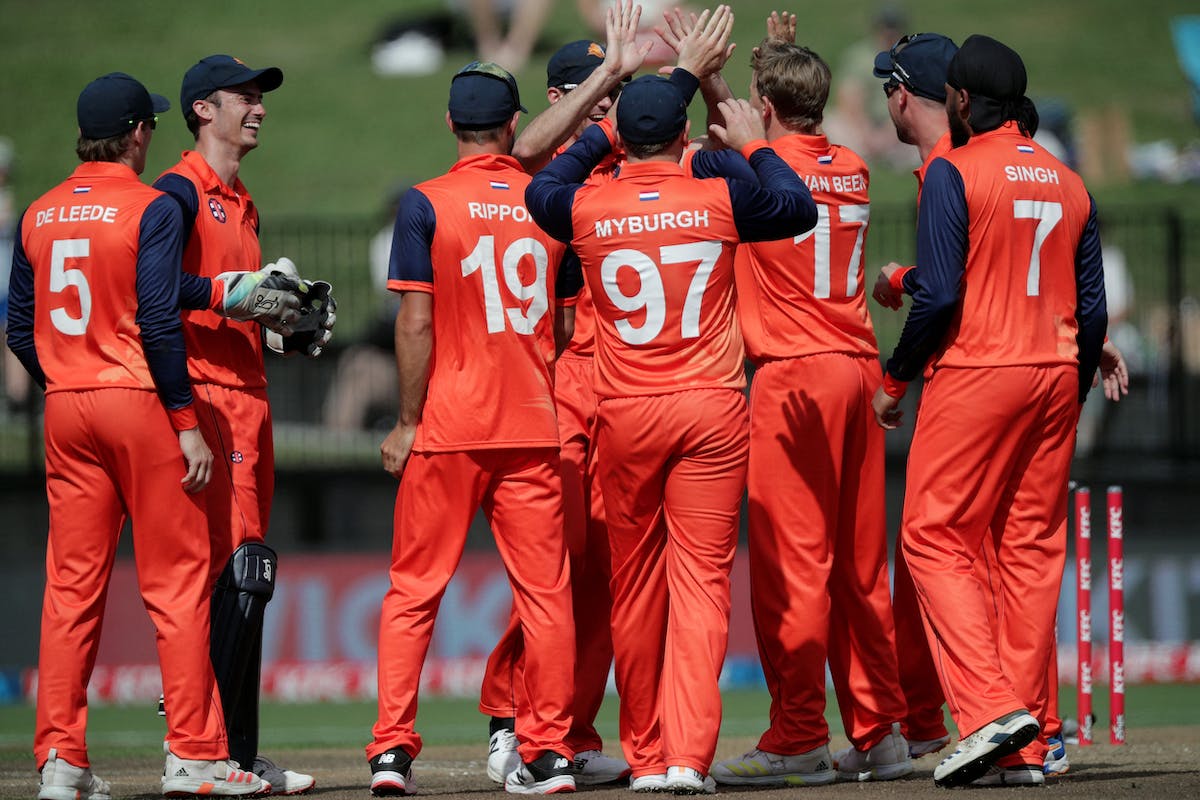 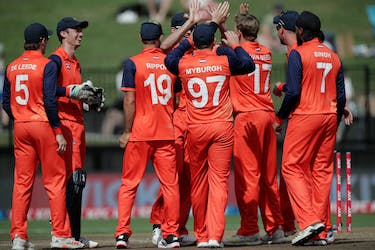 Tom Cooper, Roelof van der Merwe and the high value of experience for the Dutch

With plenty of notable exits from Dutch cricket, Cooper (35) and Van der Merwe (37) lend their experience in a team that has plenty of talent and promise

No team would have wanted a quick turnaround more than the Netherlands, who had a shocking T20 World Cup last year, not just included three losses, but were also bowled out for just 44 by Sri Lanka - the lowest total in the marquee event. A lot of that can be attributed to the lack of matches. The Dutch had played competitive T20I tri-series featuring Nepal and Malaysia in March last year and also featured in a few ODIs, that included a series win over Ireland at home in June.

In comparison, they have played seven T20Is and as many as 16 ODIs since the end of last year’s T20 World Cup, that has given them a lot of match time ahead of the tournament. Their losses to Ireland, Namibia and Sri Lanka in last years’ edition was also the end of the road for one of their stalwart Ryan ten Doeschate and their leading run-getter Ben Cooper.

Since then, even Pieter Seelaar due to a persistent back issue earlier this year had to call it quits.

To make matters worse, their head coach Ryan Campbell who has been instrumental in getting Dutch cricket to where it is today suffered a cardiac arrest, but has since recovered and while he is part of the backroom staff at this World Cup, it is only as a consultant with Ryan Cook taking over the head coach responsibilities from him.

This would have been a massive loss for any team in the world, but the Dutch have used this as an opportunity to churn out young cricketers, who in the last year or so have made their presence felt –be it Bas de Leede, Tim Pringle, Teja Nidamanuru or Vikramjit Singh. Even Scott Edwards, since taking over as captain, has produced a few top innings.

To bring back some experience in the side, the Netherlands have called upon the services of Tom Cooper, who returned to the fold earlier this year after a gap of six years, and Roelof Van der Merwe, who since the last World Cup has made sporadic appearances at best for the Dutch.

Moreover, with experienced pros like Dan Christian and World Cup-winning coach Gary Kirsten too part of the backroom staff, the Dutch have sent a message stating they’re here to compete and win.

“It’s been six years between drinks I guess. My little brother Ben, played for nine years. Him retiring, sort of opened up a spot in the batting order. I got an email out of the blue asking if I would be interested since they wanted some experience. I’ve got two young kids, so my wife was supportive of the decision, and here I am now,” Cooper said in a chat with Cricket.com.

“When I first went over to Holland a dozen years now, it was very amateur. It slowly got more and more professional. All of those guys barring a couple have retired or are not playing anymore. The new generation of Dutch players and there are some really exciting young talent and then you throw in the experience of the guys playing County cricket, it’s an exciting squad to be a part of,” he further added.

Cooper, who is an Australian by birth qualifies to play for Netherlands through his mother. It was not too long ago that he was on the radar to play the T20 World Cup for Australia in 2020, but a combination of COVID and poor domestic form ensued that he never got that coveted call-up. Aaron Finch, the Australian captain, in fact put Cooper in the same league as Jos Buttler.

"I’ve played a lot with Finch at the Renegades. He was my captain there. To get that feedback was quite exciting and showed that I was doing something right. Unfortunately, probably a couple of months later, I had a pretty shocking Big Bash that year. He then told me that I’d basically played myself out of the team,” Cooper recalled.

“It’s nice to get compared to Jos Buttler, one of the greatest Twenty20 batters of all time and one of the most destructive in the world. So, you take a lot of confidence from that. It didn’t quite materialise which is disappointing. Fortunately, I get another World Cup with the Dutch side.”

The progress of Dutch cricket has been hampered to a certain extent as their players choose to play County Cricket instead of playing for the Netherlands. Fred Klaassen, Tim Van der Gugten, Brandon Glover are some of the examples.

Roelof Van der Merwe, who plays for Somerset, explains the reason behind this

“At the end of the day, guys work, that’s your livelihood in the UK. We know what situations Netherlands is in with funding from the ICC. It’s hard for them to step up to get all their players back,” Van der Merwe told Cricket.com.

“It’s a tough situation to be in. Most of the guys would love to just pop over, play for Holland and no questions asked. But it’s a bit more complicated that just playing for your country.”

Van der Merwe also played in cricket’s newest format The Hundred, where he turned up for Northern Superchargers this season. He reckons that the format has a great potential going forward. 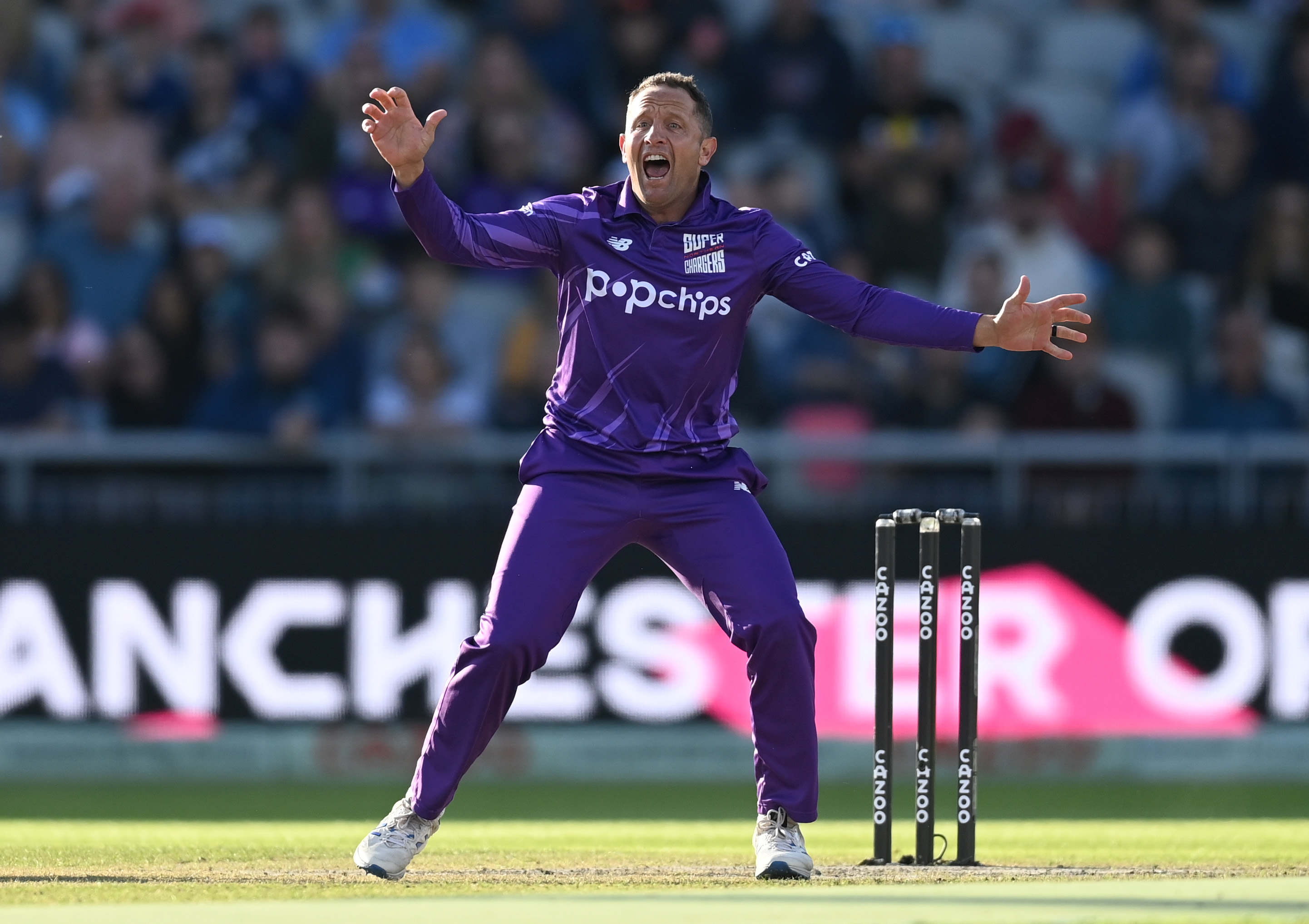 “The Hundred has been great. It’s been very popular amongst fans, it’s been well supported. It’s something that’s different from the regular T20s that we play in the UK. It’ll go for quite a while still, it’ll keep on getting support. There’s definitely value in that and you never know…the Olympics Hundred-ball could happen,” the all-rounder reckons.

Match-ups in T20s are considered to be a crucial factor in determining the outcome of the game. Van der Merwe, a left-arm spinner and a right-handed batter, however, reckons that it boils down to execution eventually.

“There’s definitely something with match-ups. You still need to execute the skill. What the match-up says is, listen, there’s a high probability that a certain player will score against the other player. You do look at that. But I still believe there’s a lot of human factor in executing skills and outsmarting oppositions,” Van der Merwe said.

“But when you talk about the one percenters, match-ups do come into that then. But you still have to execute your skill and if it’s not your match-up, you could still win the match up.”

Speaking of Ryan Campbell’s impact on the Dutch side, Van der Merwe, who will turn 38 soon, says, “The impact that Cambo has made over the last few years has been immense. I remember the first chat he had to us in Hong Kong back in the day just before he started. He was set in his ways and was very clear on the way he wanted to do things. We were very successful playing under him.” 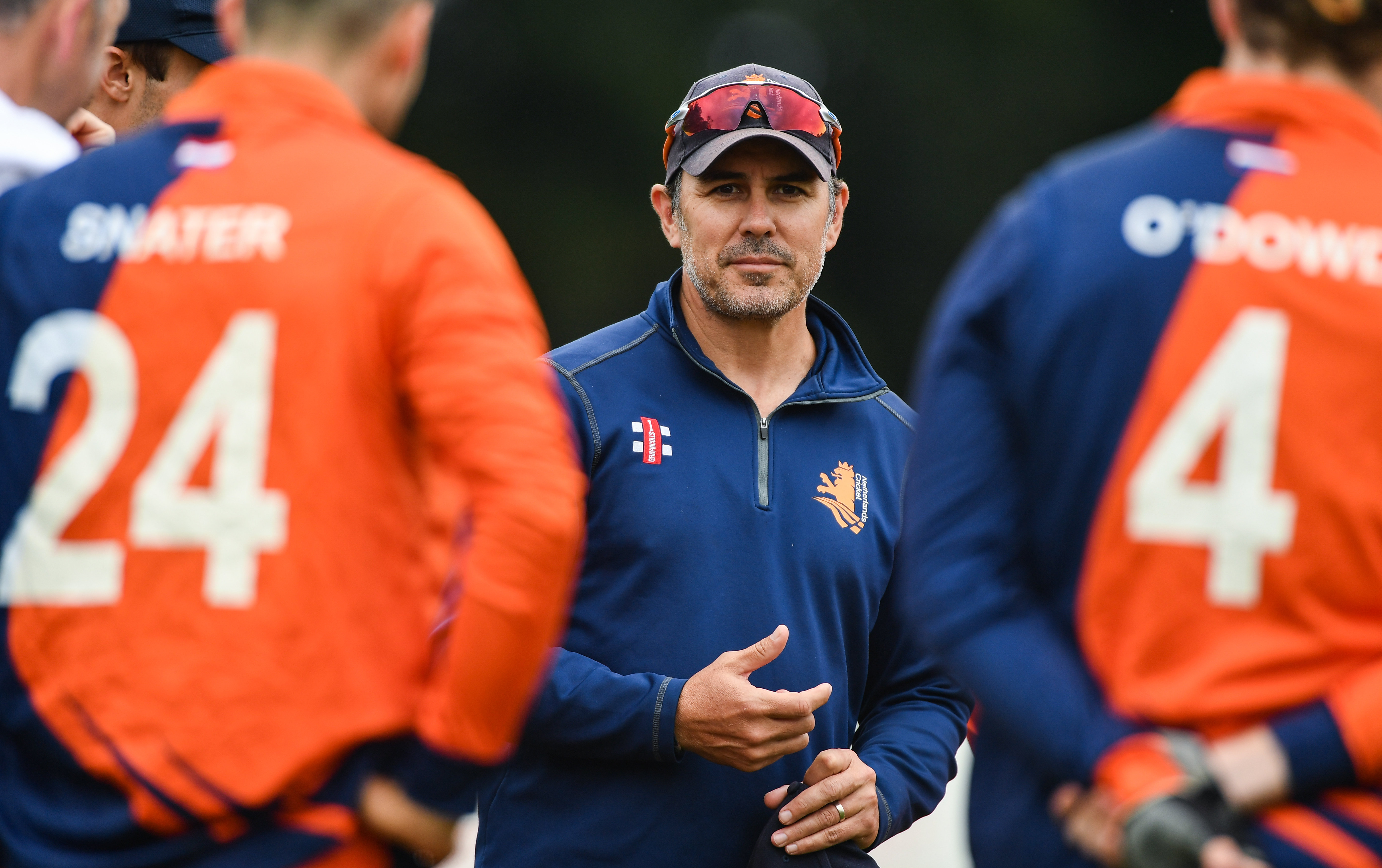 Going one step further, Cooper believes Cook and Edwards have taken charge of the side extremely well since the departure of Campbell and Seelaar.

“There was a fair bit of drama at the start of the summer with Ryan Campbell that made headlines around the world. Cooky came in not under the greatest circumstances but he’s taken it all in his strides and the boys really love him. He’s brought a whole heap of energy and backs the boys, cares about the boys. We’ve made massive strides under him, similar for Edwards,” Cooper who has scored 552 runs at a strike-rate of 136, said.

“Everyone knew Seelaar was on his last legs. He would have ideally liked to get through the summer but he sort of pulled out early in the year, midway through the England series. Scotty’s come in and taken it in his strides. He has barely put a foot wrong – captaining and also with the bat.

“He’s been outstanding. Another one of those guys that through sustained games against these better teams has really looked at home. So, it’s a nice environment here. Hopefully, we can make their jobs easier by playing some good cricket over the next couple of weeks.”

Netherlands are going to play all their three matches at the Simonds Stadium in Geelong, which is one if the venues where they have drop-in pitches.

Cooper who has played plenty of matches at the venue for the Melbourne Renegades in the Big Bash reckons there could be a lot of runs on offer there.

“It’s a drop in wicket. It’s generally an AFL ground, where the Geelong Cats play. So, over the years, they’ve tinkered with the way the wicket runs. But I’m pretty sure now that it now runs straight down the middle. It’s probably a similar shape as Adelaide Oval, it’s quite long straight, short square boundaries,” Cooper said.

“It being a drop in wicket, it’s sort of been dependent on the weather, it is under-prepared sometimes. Last year, during the Big Bash the Perth Scorchers, who almost had it as a home away from home, we saw some really high scores where 200 was scored and chased down quite often.

“Hopefully, as I guess everywhere with drop in pitches they’ve got better with the technology they have these days. So, hopefully, we’ll have plenty of runs and some high-scoring games.”

With the Netherlands playing in the ODI Super League, they have had to dig really deep to find more players to come through the system and play at the highest level. With white-ball fixtures Pakistan, New Zealand, Afghanistan, West Indies and England to go with the T20 World Cup Qualifiers under their belt, many have stood up and made it count. 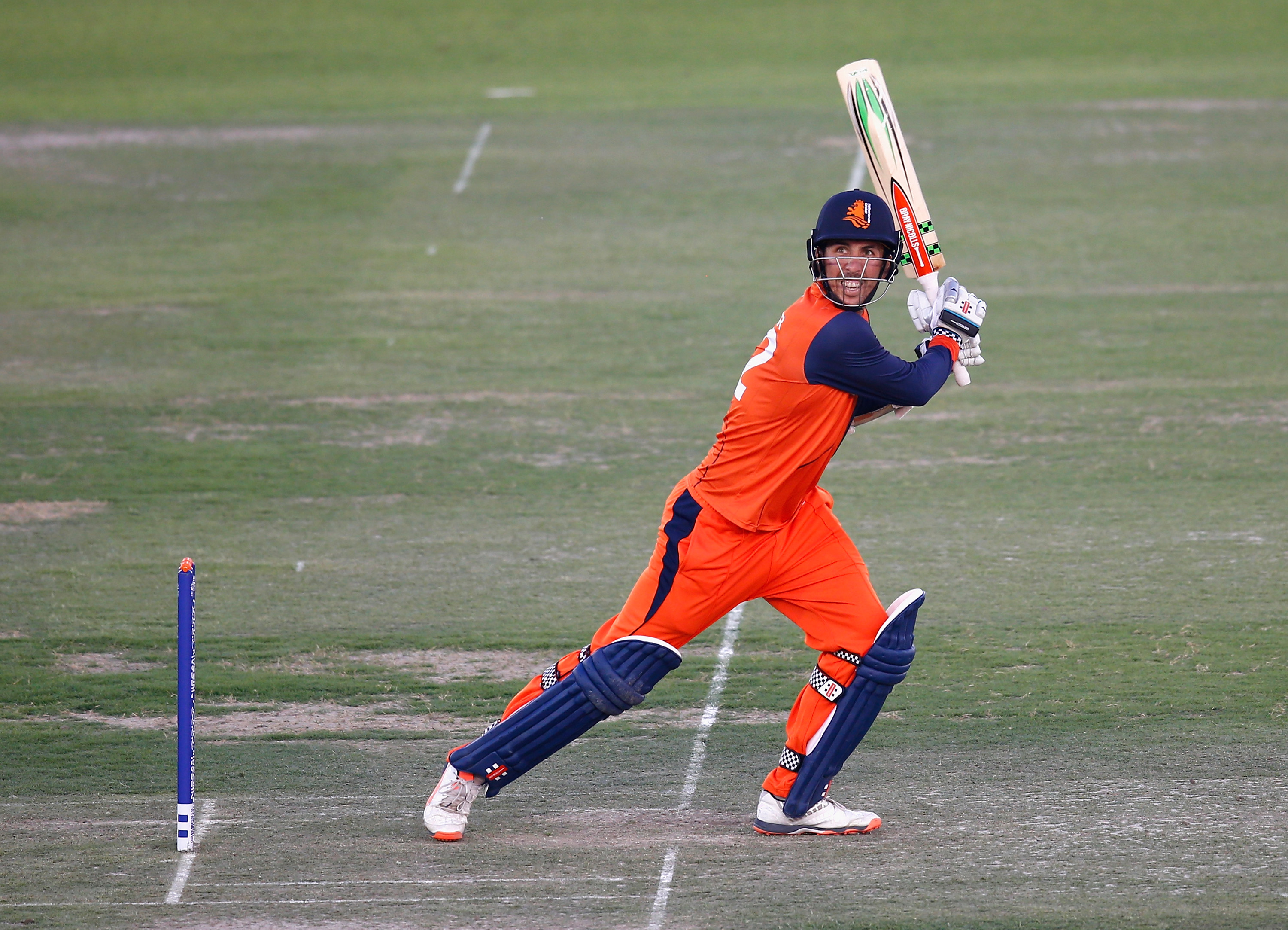 “I know associate teams talk about it a lot, but when you don’t play against the big teams all that often, it’s hard to learn and it’s hard to compete. But we’ve had a sustained games against them and the boys throughout the summer have shown that they’re good enough to perform at that level and they’ve take a hell of a lot of confidence out of that,” Cooper said.

“It wasn’t the case in the past where you come up against these superstars, all these guys you look up to and you almost think you can’t beat them because you sit back and watched them on TV. Now our guys have been out there, competing against them, they’ve taken wickets against them, scored runs against them and they believe they can perform. The job now is to do that consistently. Vikram Singh, Bas de Leede they are really young guys. There’s no reason they can’t take the world by storm and show what they’re made of.”

While resonating with Cooper’s thoughts, Van der Merwe reveals that finding depth in the side is what Campbell wanted to achieve when he first started off in 2017.

“One thing that Cambo was very on point with was developing young players and exposing young players to play for the national team. There’s a lot of talent there that’s untapped in Holland. It’s great to see these guys step up and play for Holland and where better than the T20 World Cup!” Van der Merwe, who has played three ODIs and 33 T20Is for Netherlands said.

With a perfect blend of youth and experience, Netherlands only aim over the next week will be to right the wrongs from last year and progress through to the next round. They will have to hope the time in the nets, time on the field and learnings from the coaching staff are good enough to execute their skills when it matters the most.