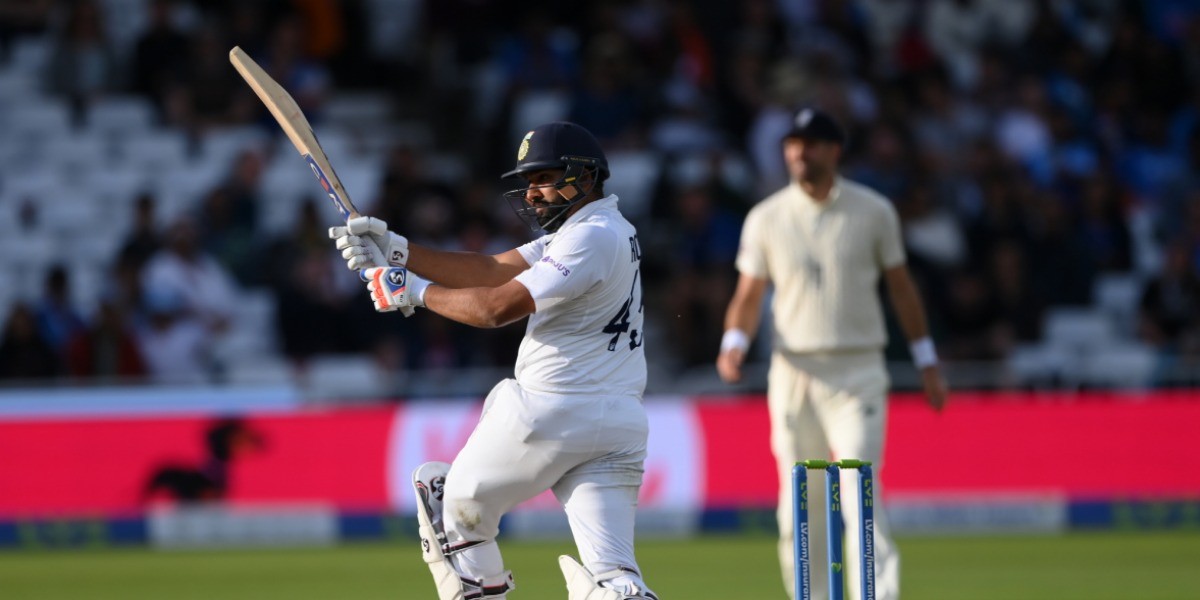 Barring a collapse, India are well placed to complete their highest-ever chase on the English soil

At the end of the third day, a 95-run first-innings lead seemed substantial. The fact that India have never lost after a 75+ run lead in England provided comfort. Add to it the ineptness of England’s batting in the first innings and India's win was taken for granted. If not by those playing, but by many watching from afar, waiting in anticipation for success in the country that has humbled India often in the last decade.

But while the cricket-crazy nation for once had their mind elsewhere, far away in Tokyo where a wait of the first-ever medal in athletics was about to end, England staged a comeback. While he was around, Joe Root looked authoritative in the first innings. In the second, he moved up one level and played as fluent a knock as he had played at home in years.

From 46/2, England moved to 272/6 – leading by a 177 when the second new ball arrived. Root was at the crease, past a hundred to savour, along with the ever-threatening Sam Curran. Within a few hours, India moved from a position of an imminent victory to add yet another ‘so close and yet so far’ moment in England.

But, unlike how England turned the table slowly with each passing hour on the fourth day, the game moved in India’s favour again rapidly in the last two hours. Mixing his red and white ball skills with absolute mastery, Jasprit Bumrah helped India brush off England’s tail with a consecutive five-wicket haul at Trent Bridge. India had to chase down 209 runs to go 1-0 up.

With around an hour to bat late in the day with floodlights on, India had a lot to lose and a little to gain. But as England went searching for wickets, KL Rahul attacked everything pitched up and hit six boundaries in no time. Stuart Broad then came back in a second spell to take his first wicket against India after 60 overs. But, Cheteshwar Pujara took the uncharacteristic attacking route to give India a 12-run last over. India erased the target by 25% while losing only 10% of their resources by the end of the day.

With 157 runs to win and nine wickets in hand, India look well-placed. However, they are up against three factors: the not so uplifting record of their batsmen in the fourth innings, the history and of course, the weather.

Can the middle-order wash off the failure of the first innings?

With the benefit of hindsight, it is fair to say that the game would not have been this close if not for the collapse of India’s middle-order in the first innings. But, such are the conditions in England and the ever-lasting movement of the Duke’s ball that a collapse is always on the cards. This is something that will not allow India to breathe easily until they cross the line. 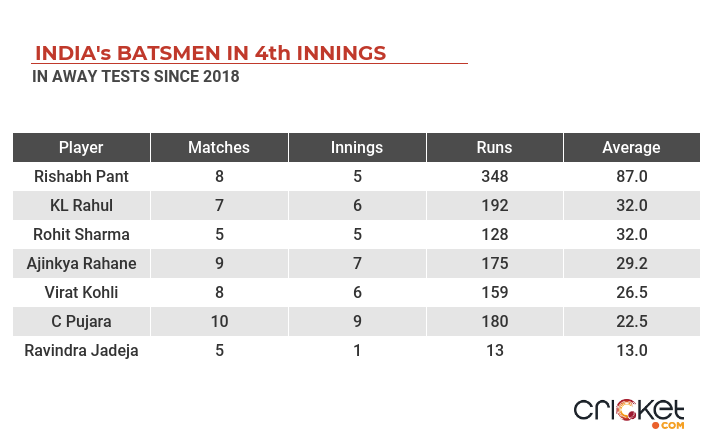 Adding to the discomfort is the record of their players in the fourth innings of an away Test. With what he achieved in Sydney and Brisbane, Rishabh Pant is unsurprisingly at the top. But, there is nothing of substance after him. While India achieved one of their most memorable fourth innings win with the bat at the Gabba, it was the youngsters who largely took the onus of scoring the runs. When they will walk out to bat, Virat Kohli and co will have to better their fourth innings average if India have to avoid heartbreak.

History is against India

Only on nine out of 121 occasions has a touring side won chasing 200 or more in the fourth innings in England. Only thrice since the turn of the century. And only once ever at Trent Bridge, by the West Indies when they chased down 208 here in 1980.

Moreover, the highest score India have ever chased to win a Test in England has been 173, which they did way back in 1971 at the Oval. During the 2018 tour, India fell short by 31 runs while chasing 194 at Edgbaston and collapsed from 123/3 to 184 all-out while chasing 245 in Southampton.

If India manage to chase down the 209-run target, it will be their highest successful chase in England.

Bright sunshine and the use of a heavy roller ensured that the fourth day was the best for batting in the Test so far. While India can still opt for the roller of their choice, the weather is out of their control.

As the forecast stands, the fifth day is likely to witness a dense cloud cover throughout the day, with some chances of rain. This will make India’s task of achieving the target harder. Perhaps the only aspect tilted in their favour is that the target is small enough to not allow the second-new ball to come into the fray.