England Women will take on India Women in the first T20Is of the three-match series at the County Ground, Northampton on Friday (July 9). The hosts currently lead the multi-format series 6-4 after a drawn Test and a 2-1 win in ODIs. 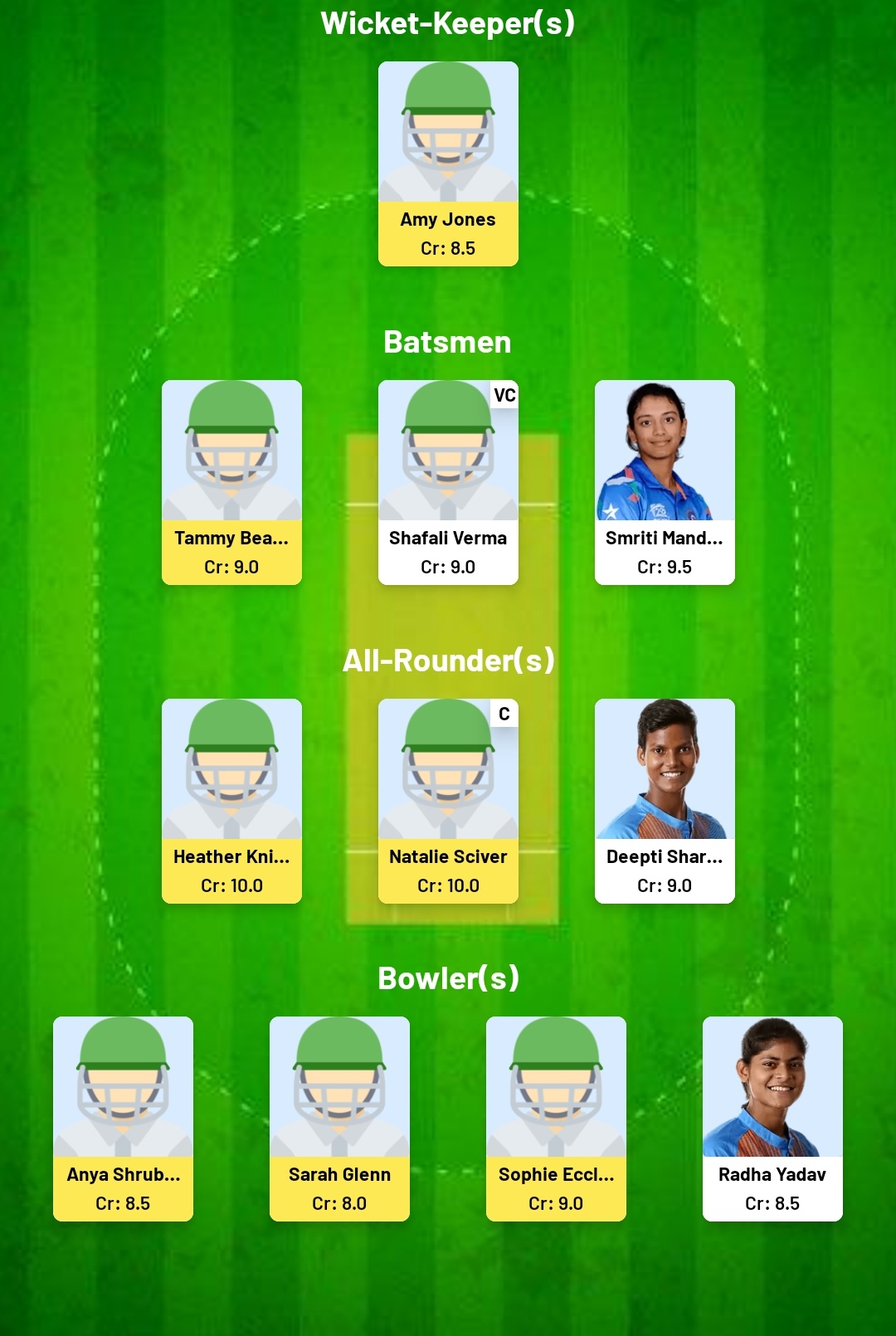 The County Ground, Northampton has hosted only one Women's T20I in the last five years - England v West Indies in June 2018. The likes of Danielle Wyatt, Amy Jones and Natalie Sciver were amongst runs and the trio helped England amass 180/6 in their 20 overs. In reply, West Indies could only manage 138/9. There's not much data available apart from this game, so it would be ideal to go with a balanced XI.

In the batting department, it would be difficult to leave out players like Tammy Beaumont, Heather Knight, Sciver, Shafali Verma and Smriti Mandhana, while there are also a couple of world-class spinners in both teams. We have gone with seven batters, including three all-rounders and a wicketkeeper, and four bowlers.

Natalie Sciver has been England's best T20I player in the last few years. Since 2020, she has slammed 437 runs in 16 innings at an average of 31.21 and a strike rate of 114.1. The right-hander has hit five fifties in this time period and that tells you something about her consistency. On top of that, Sciver has also picked up 16 wickets at a strike rate of 17.6. She is someone who could fetch you points in all three facets of the game.

Our Criclytics player projection predicts Sciver could score 16-24 runs and pick up 0-1 wicket in this match.

Amongst the top-20 teams in T20Is, only Megan Schutt (25) has picked up more wickets than Sophie Ecclestone (24) since 2020. The left-arm spinner has taken those wickets at a strike rate of 15 and an economy of just 4.8. Ecclestone has been in superb form of late. The 22-year-old took eight wickets in the one-off Test and was then named Player of the Series in the ODIs, picking up eight wickets at an average of 13.62.

Our Criclytics player projection predicts Ecclestone could pick up 1-2 wickets in this match.

Shafali Verma is only 17 but is already one of the most feared batters in world cricket. The top-ranked T20I batter made her Test debut during the ongoing tour of England and slammed 96 and 63 in the two innings of the solitary Test. Since 2020, the swashbuckling opener from Haryana has smashed 395 runs in 13 T20Is at an average of 30.38 and a strike rate of 151.9. Amongst batters who have scored at least 100 runs in T20Is since 2020, Shafali has the best strike rate.

Our Criclytics player projection predicts Shafali could score 32-48 runs in this match.

Smriti Mandhana looked impressive in every innings of the three-match ODI series but couldn't get that big score. The stylish left-hander crafted 78 in the first innings of the one-off Test and put on 167 runs with Shafali. In the ODI series, Mandhana managed scores of 10, 22 and 49 and would now be eager to stamp her authority in the T20I series. Mandhana (136.2) and Shafali (151.9) are the only two Indian batters who have a strike rate of more than 110 in T20Is since 2020.

Our Criclytics player projection predicts Mandhana could score 26-38 runs in this match.