Australia head to the top of the table after this win.

Aaron Finch (153 off 132 balls) played a captain’s knock to lead Australia to an 87-run victory over Sri Lanka at The Oval, London on Saturday. While the result didn’t come as a surprise, the five-time World Cup winners had to sweat for a while before securing the win.

Chasing 335, Dimuth Karunaratne (97 off 108 balls) and Kusal Perera (52 off 36 balls) got the Sri Lankans off to an electrifying start, taking the attack to the Aussie bowlers from the word-go. Perera was, especially, in smashing form as he raced to a half-century off just 33 deliveries.

Captain Karunaratne, at the other end, kept up with the rate as the duo added 115 runs in just over 15 overs. The Australians were desperate for a wicket and it was their key bowler Mitchell Starc (4/55) who delivered. A swinging full delivery saw Perera’s stumps disturbed and that was just the opening Australia needed.

Despite having wickets in hand, Sri Lanka’s innings hit a road block. The Islanders managed just 66 runs between overs 16-31, despite losing only two wickets during the period. It was a tall task after that and the pressure of an increasing run-rate saw them lose wickets at regular intervals before being bowled out for 247 in 45.5 overs.

Karunaratne will be bitterly disappointed to have been dismissed just three runs short of a maiden ODI century. The manner of dismissal would frustrate him more as he played a nothing cut shot, presenting an easy catch to Glenn Maxwell at point.

It was Starc once again who was the most impressive of the bowlers for Australia. The left-arm pacer, with 13 scalps, is the highest wicket-taker at the tournament now. He was well backed by Kane Richardson (3/47) and Maxwell (0/46), who despite not picking a wicket, played a big role in slowing down the scoring rate in the middle overs.

Earlier in the day, it was the Finch show for Australia.

David Warner, not for the first time in this tournament, struggled to get going before he was dismissed for a 48-ball 26. This is an area of concern for the Australians as they managed 53 in their first 10 overs. On the other hand, Sri Lanka were 87/0 during the same period.

It was Usman Khawaja’s turn to come at number three to keep the left-right combination going. The left-handed batsman, after a splendid start to the year as an opener has failed to keep the run going at the World Cup in the middle-order and fell for just 10 (20). It was Dhananjaya de Silva (2/40) who was causing all the damage to the Aussies, picking up both the wickets to fall.

It was only when Steve Smith (73 off 59 balls) joined Finch in the middle that the innings moved up a few gears. The current and former captains combined to put on a 173-run partnership off just 119 deliveries for the third wicket.

Finch was at his destructive best as he slammed 15 fours and five sixes, en route to the joint-highest individual score at this year’s tournament. At the other end, Smith continued his fine run in World Cup cricket – the 30-year-old has eight 50+ scores in his last 10 innings in ODI cricket’s biggest event.

When Finch was dismissed at 273/3 after 42.4 overs, you’d have expected Australia to post a 350+ total. It wasn’t to be as some fine bowling, especially from Lasith Malinga (1/61) and Isuru Udana (2/57), saw Sri Lanka restrict their opponents to 334/7. This was despite a blazing knock from Maxwell, who smashed an unbeaten 46 from just 25 balls.

Udana was not just impressive with his death over bowling but also with his fielding. He executed a couple of brilliant run-outs off his own bowling to get rid of Alex Carey (4 off 3 balls) and Pat Cummins (0 off 1 ball) in the 49th over.

While Australia managed 51/6 in the third Power Play (41-49 overs) against Pakistan, they scored 32 runs in the last five overs in this game. If Finch’s side have to go all the way in this tournament, they need to improve drastically during this part of the game. 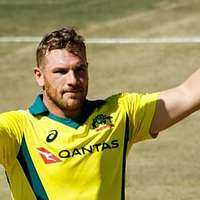