Australia began their 2019 World Cup campaign with a convincing seven-wicket victory over Afghanistan.

A 10-team World Cup was supposedly necessary to make the tournament more competitive with lesser one-sided matches. No one seems to have given the memo to the teams and players at the tournament though.

Four matches in, we’ve seen a game won by 104 runs while the other three have had targets chased down with more than 15 overs to spare – the latest of which saw defending champions Australia thrash Afghanistan by seven wickets.

The Player of the Tournament at the 2015 World Cup, the mercurial Mitchell Starc has missed a lot of cricket due to injury. In fact, this was Starc’s first ODI in 2019 with the Aussies already having played 13 matches previously.

The left-arm pacer didn’t show much rustiness as he bowled Afghan opener Mohammad Shahzad off the third delivery of the match. There was little respite for the Asian team as they had to face the fiery Pat Cummins from the other end and within the blink of an eye, both opening batsmen were dismissed without scoring.

That was not Cummins’ only success on the day. He would take two more wickets, ending with bowling figures of 3/40 as Afghanistan were bowled out for 207.

It was not all smooth sailing for the side from Down Under though. Rahmat Shah looked solid for the Afghans, but for his side to have a chance, he had to convert his start into a big score. Unfortunately for his team, the 25-year-old fell for 43 to a diving catch from Steve Smith.

It was Smith’s return to international cricket and his impact in the field was perceptible. Soon after the catch, another piece of brilliance from the former Australian skipper saw Mohammad Nabi run-out for just seven.

At 77/5, it looked like the Afghanistan innings would fold in double quick time. Najibullah Zadran and Gulbadin Naib, though, had other ideas as they put on an entertaining 83-run partnership. Najibullah was especially in fine form, taking the attack to the Australian bowlers, scoring 22 runs off an Adam Zampa over.

There were fireworks from Rashid Khan (27 from 11 balls) later in the innings as well, but the Afghans would be bitterly disappointed to have been bowled out with more than 10 overs left.

An easy chase for the Aussies

A total of just over 200 was never going to be enough and Australian captain Aaron Finch was in a hurry to get the chase done with. Finch took advantage of the Power Play to help himself to his sixth 50+ ODI score this year. The Victorian has scored above 50 in 42.9% of his innings in 2019, a stat that will go down well with the Australian fans.

At the other end, there were plenty of eyes on the returning David Warner. The left-handed batsman was patchy at the start but once he got into his groove, there was no stopping him as he eased to an unbeaten 114-ball 89. Following a fab Indian Premier League (IPL) where he won the Orange Cap, Warner’s form will be an encouraging sign for Finch and co.

This was the first time that Warner, Smith, Starc and Cummins played together in the same ODI since January 2018. With those four fit and firing, and the confidence of having won nine on the bounce, Australia’s dominance in World Cup cricket might just subsist! 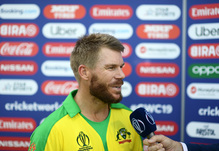 NEWS
'It's good to be back,' says Warner after scoring unbeaten fifty on return
David Warner defied the boo-boys to hit an unbeaten half-century on his official return to international cricket.