I can't judge Rahane's form, only he knows what he is going through: Kohli 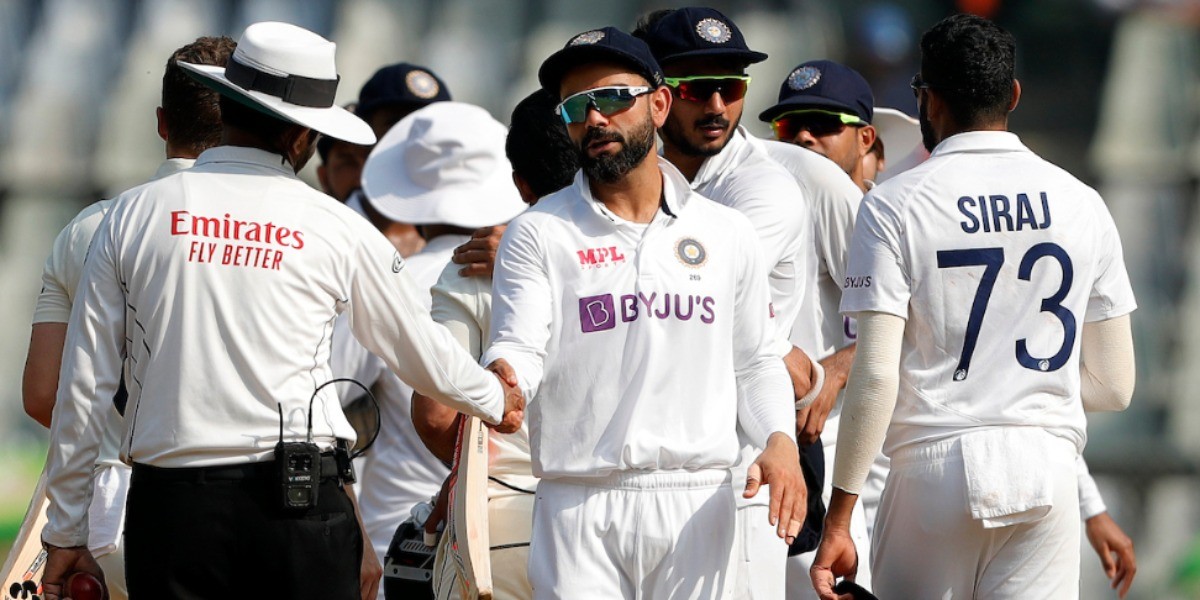 I can't judge Rahane's form, only he knows what he is going through: Kohli

The vice-captain of the Indian side is going through a lean patch, and Virat Kohli insisted the team will not press the panic button

The Indian team registered a thumping 372-run win against New Zealand to seal the two-match series 1-0 at the Wankhede Stadium in Mumbai. The spinners wreaked havoc in the morning session to scalp five wickets and wrap up the proceedings under 45 mins.

While the Indian team completed a comprehensive win at home, a stern test awaits the side as they lock horns with South Africa later this month.

In a post-match press conference, Virat Kohli answered some tricky questions, including his own form, along with doubts over Ajinkya Rahane's place in the side.

"I can't judge his (Rahane's) form. No one can judge it. Only the individual knows what he's going through," Kohli said when asked about the Mumbaikar's poor patch, which has resulted in an average of less than 20 across 12 Tests.

Rahane has been a vital cog in the batting unit of the side in the longest format, and the skipper feels it is essential that Rahane feels secure because of his excellent record in the past, and the team wouldn't like to press the panic button just yet.

"We need to back them in these moments, especially when they have done well in the past. We don't have this environment where we have our players asking, what happens now? That's not how we do it in the side, " he added.

Kohli himself is going through an indifferent form and has not scored an international hundred since the Pink Ball Test in Kolkata against Bangladesh in 2019, but over the past two years, he has not felt any alarm about the manner of his dismissals.

"We stick to the process, but if the mode of dismissal is repetitive, then there's something we need to address. See, it's about playing 60-70 balls to get a feel for it.

"Sometimes those things happen naturally, and sometimes they don't, but the only constant is that you work hard and trust the process. That shouldn't waiver because that comes from personal experience," the skipper, who is now the first Indian player to win 50 matches across each format, " he further added.

With the Indian team set to be picked in the coming week, Kohli did not divulge any details in regards to the combinations the team would opt for away from home. However, lack of runs from Cheteshwar Pujara and Rahane have been an area of concern for the side, and the team management would look to slot in Shubman Gill or Shreyas Iyer after their exploits in this series.

"Again, that's a discussion that needs to take place. Who we think are the specialists for certain positions and so on will be covered there. These aren't things I can answer in a press conference; we need to sit down with it and come to collective decisions.

"That's the same process we will follow. Everyone puts in their ideas, and then we make our decision," said Kohli.

Kohli also heaped praises on Mayank Agarwal for his sublime performance across innings and lauded the efforts of the 30-year old in this pressure game.

Great application from him. You need to have a lot of character, and he has plenty of that. It's not just about riding the wave and playing on, it's about evolution, and he has constantly done that," Kohli said.

"Also, a performance like this will build character and help him going forward, not only as a batsman but also as a person. He's definitely an asset, and he has fantastic character. These innings will give him a lot of confidence," he further added.

While Mayank smashed a scintillating hundred in the first innings, Mohammed Siraj wreaked through the top order of the Kiwis with three quick wickets.

On a track where New Zealand pacers Tim Southee and Kyle Jamieson struggled, Siraj bowled a fiery spell during an early burst in the opposition's first innings.

"He has come a long way. He has a lot of skill and talent. The way he bowls and puts effort, you think he's going to pick up wickets always. That's a special thing to have when the pitches are tough and wickets are not falling. He doesn't really bank on conditions; he has a lot of skill, and he banks on that instead. He can make important breakthroughs.

"See, even at the Lord's, when the ball stopped swinging, he was making the ball move and gave us some crucial breakthroughs," Kohli remembered.

"He's in the best headspace as a bowler. Now, it's about staying there and staying fit," he concluded.