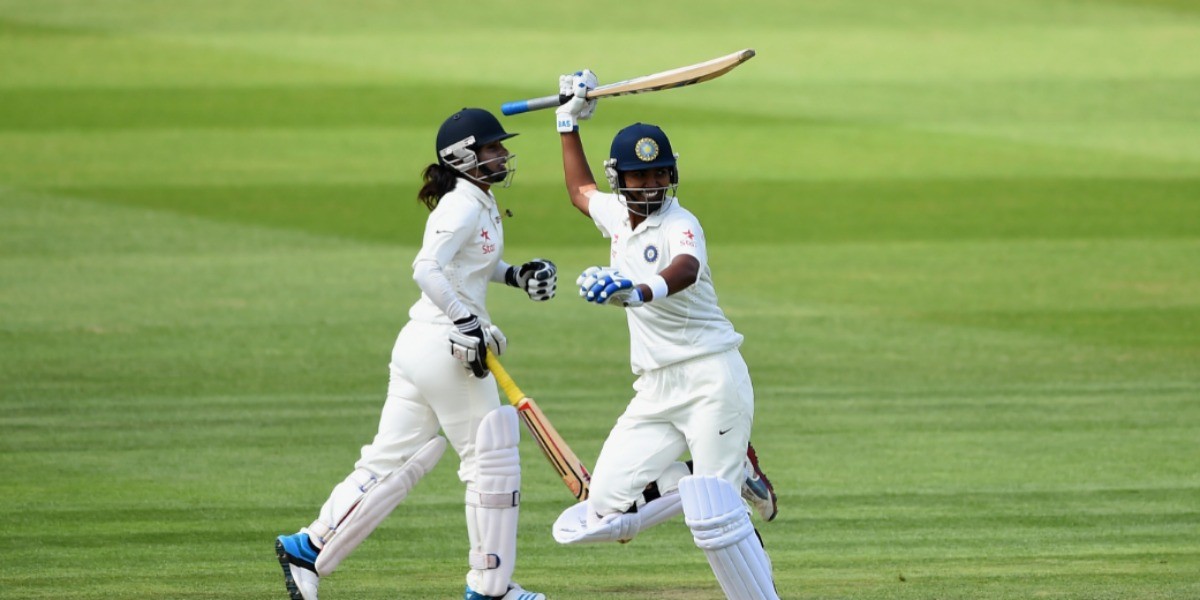 India Women and England Women will lock horns in a one-off Test match, starting on 16th of June at the County Ground, Bristol

Two days prior to the inaugural Men’s World Test Championship Final at The Ageas Bowl, Southampton, there will be another historic moment for the Indian Women’s Team. After 2401 days or 343 weeks or 6 years and 209 days, India will be playing a Women’s Test match. Before heading to the Test, let's look at some historical stats that India and England have set over the years or are on the verge of breaking over the next few days.

A Test after a long gap 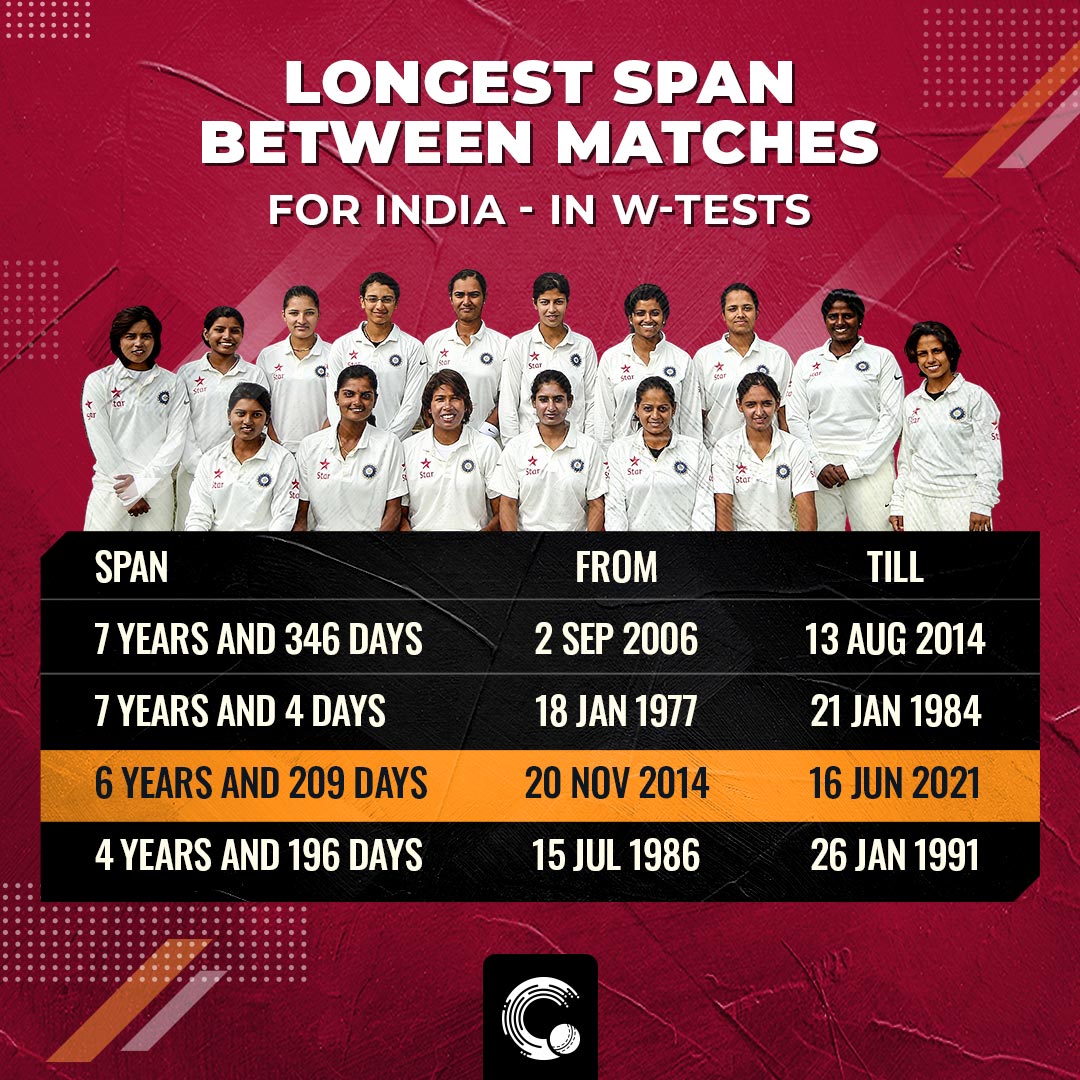 For a long, long time, there wasn’t any Women’s Test played by India. Their last one dates back to 2014 against South Africa in Mysore. Since then, there has been a big gap. 6 years and 209 days to be precise, the third longest gap between Tests for Indian Women. In fact, the Mysore Test between India and South Africa was the last for almost every other Women’s Test playing nation barring England and Australia.

The toughest challenge when travelling to England for a Test series is the conditions, especially for the Asian teams. However, that is not a case for the Indian Women’s team. They have played eight matches in these conditions and haven't lost a game. They have won twice and drawn six of their eight Tests. India are the only team to be unbeaten in English conditions. In addition, the last two matches they have played against England, they have won both. 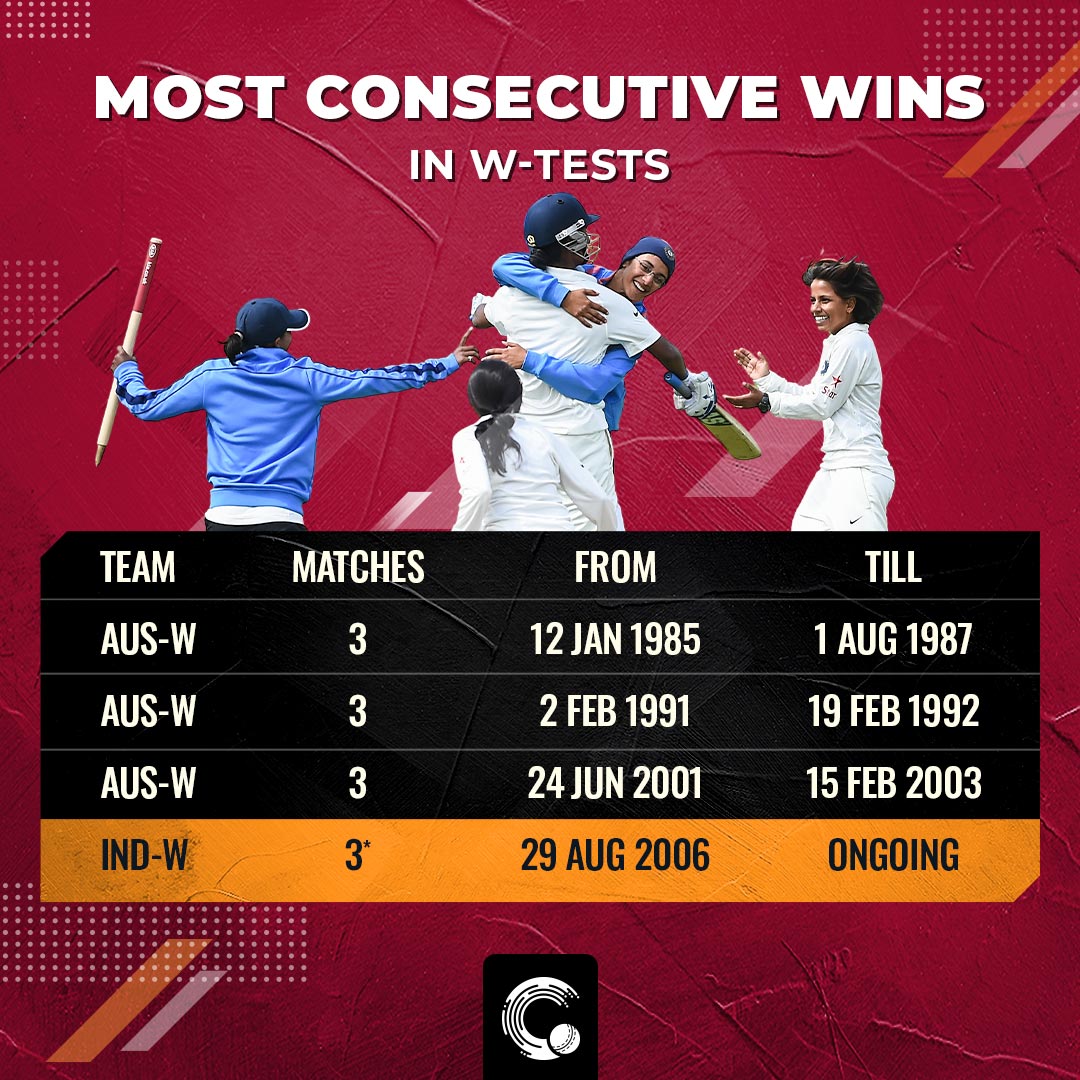 In the last three Tests, Indian Women have been victorious in all three. This is the joint most consecutive wins for a team in Women’s Test cricket history. On a special note, India are only the second team to achieve this feat. Australia Women have won three consecutive Tests thrice. If India manage to win this one, this would be a historical one. On the other hand, India are also in search of their fourth consecutive series win. It must be noted that their three consecutive series win record is the second most after Australia (5). A win here adds to that tally.

England, one win away from most wins 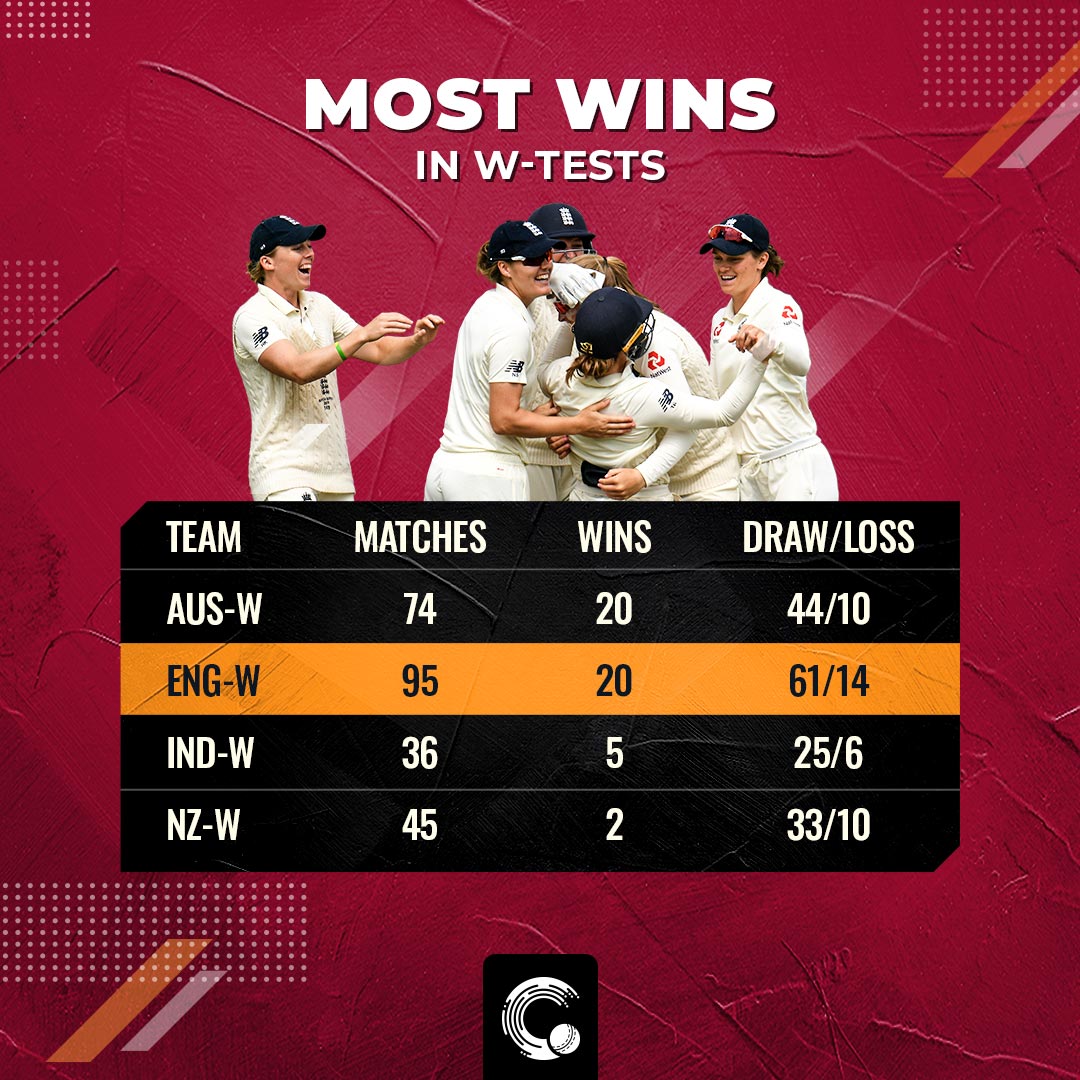 The England Women’s team have featured in most Tests, 21 matches more than Australia (74). However, when it comes to wins, both Australia and England are tied with 20 wins each. Whereas, no other team has more than five wins. If England manage to win the only Test, they will go past Australia and have the most wins (21).

India - a better batting side than England

As surprising as it may sound, England’s batting record in their own backyard hasn’t been great. On the contrary, India has been excellent in these conditions. In the eight Tests they have played on English soil, they have a batting average of 28.6 in comparison to England’s 25.6. Only Australia (30.2) has a better average than India. As a matter of fact, the highest score by a woman batter on English soil also belongs to an Indian (Mithali Raj 214 in 2002). 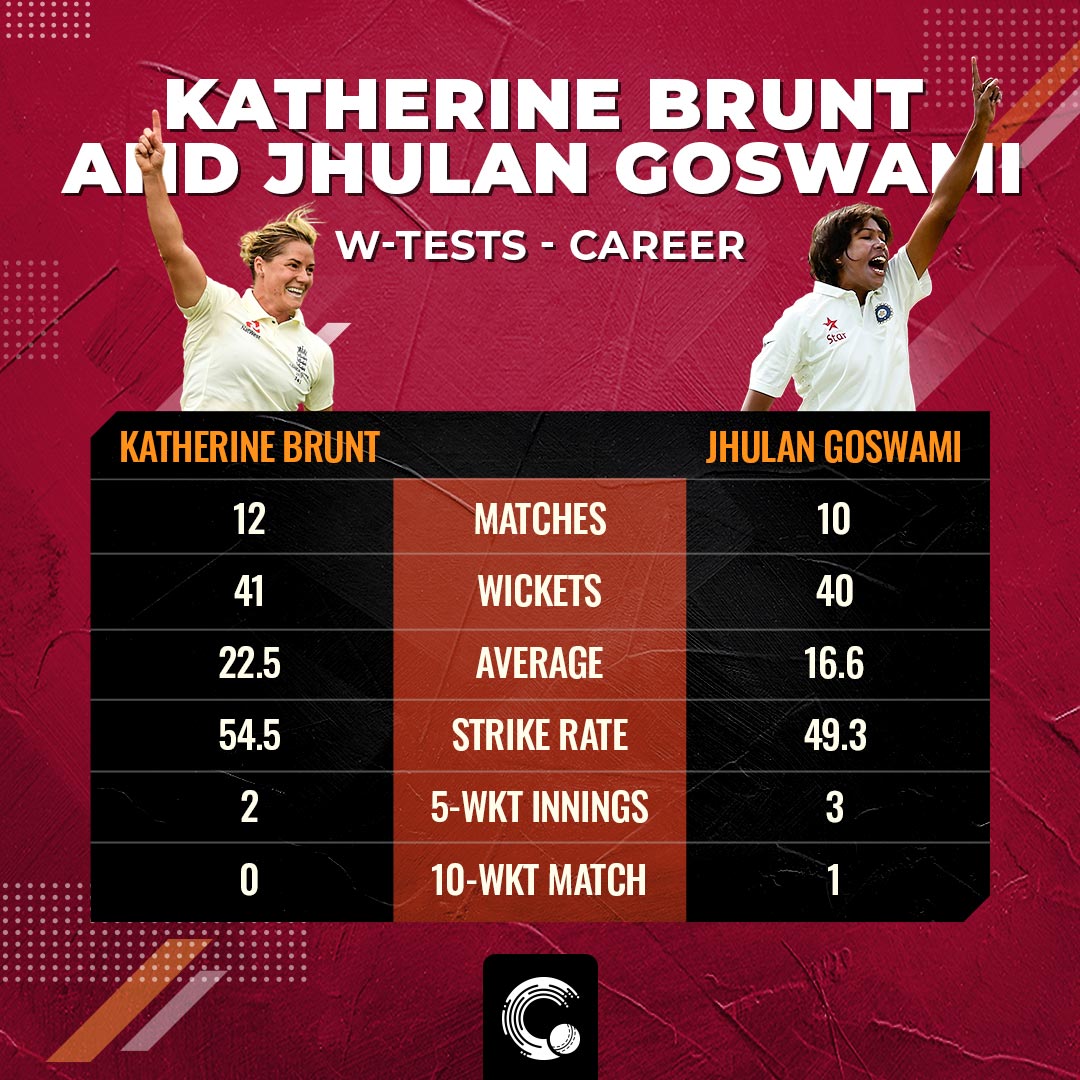 The finest and the most experienced bowlers of the modern age clash against each other in the only Test at Bristol. Jhulan made her Test debut (2002) earlier than Brunt (2004). In the four matches played against England, Jhulan and Brunt have faced off in two matches, 2005 in Delhi and 2006 in Leicester. Brunt missed the 2014 encounter against India in Wormsley. The two bowlers have been neck-to-neck in their careers. The only factor that separates Jhulan from Brunt is her average and bowling strike rate. With 41 wickets, Brunt is presently ahead of Jhulan (40). By the end of this Test, who ends up beating whom would be a story to drive home the narrative. 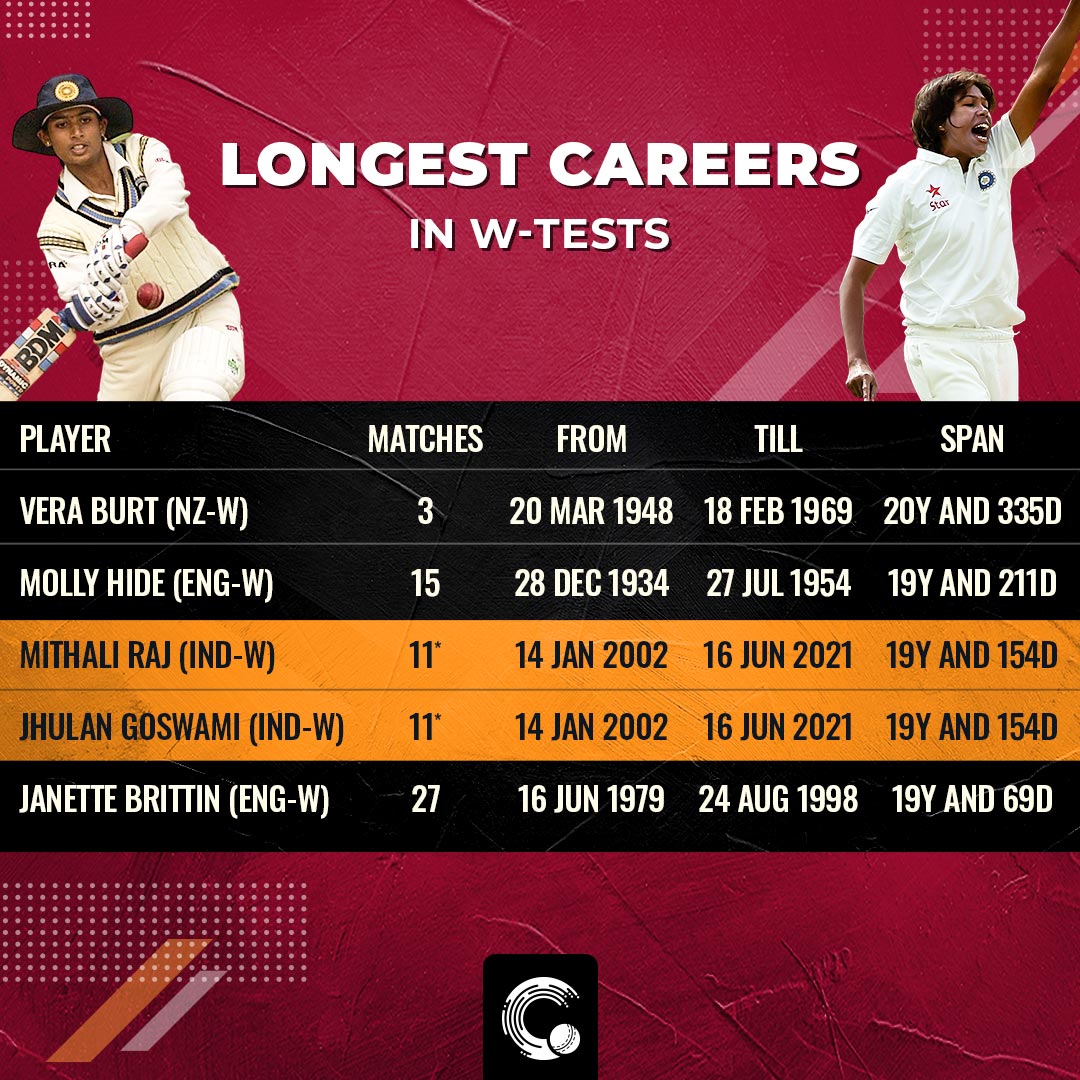 Senior and the most vital cogs of the Indian Women’s unit will add an extension to their long careers. It is not the number of matches played, it is their thrive towards success that makes them two of the most successful players. After her ODI debut in 1999, Mithali had to wait nearly two and half years to make her Test debut. Mithali and Jhulan made their Test debut in 2002 against England in Delhi. There on, India have played 10 Tests and the duo have been a part in all of them. On 16th June, when they step out, it will be 19 years and 154 days of Mithali and Jhulan’s Test career. Only Vera Burt (20y and 335d) of New Zealand and Molly Hide (19y and 211d) of England had a longer Test career than these two.