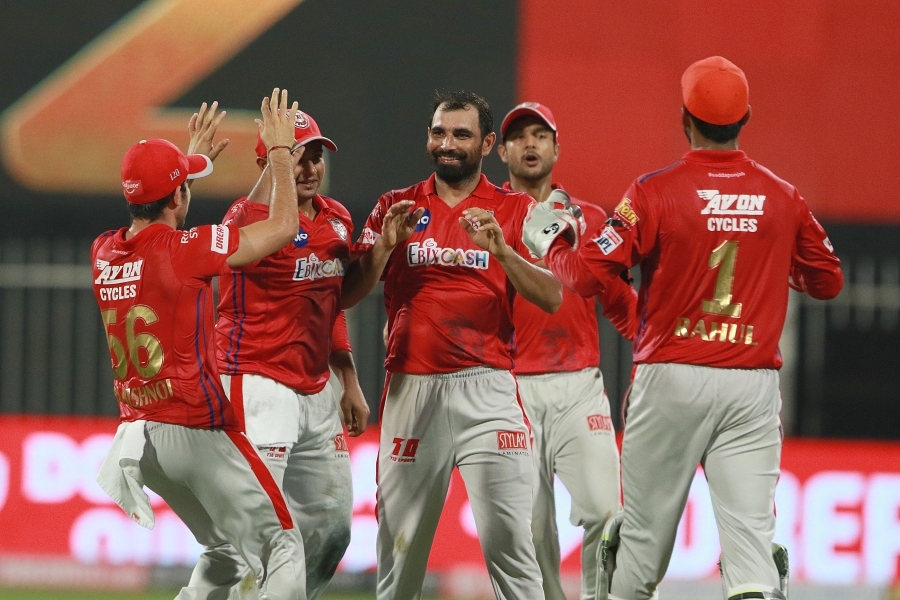 Star of the season: KL Rahul

Flop of the season: Glenn Maxwell

Find of the season: Ravi Bishnoi

It was a case of so near yet so for Kings XI Punjab who were ousted from IPL 2020 on Sunday (November 1 2020) by Chennai Super Kings. Their journey at the tournament this season wasn’t the smoothest but the manner in which they came roaring back after seemingly looking bereft of ideas was heartening.

They lost six of their first seven matches and at the mid-way stage, it felt they were this year’s whipping boys. Then there was a magical recovery. The KL Rahul-led side won 5 matches on the bounce, beating some of the best teams in the competition and it seemed there would be a fairy tale of sorts which could eventually see them lifting the trophy.

Eventually, the bubble burst and two successive defeats first at the hands of Rajasthan Royals and then a knockout blow by CSK saw them falter at the final hurdle.

Before we get into the nitty-gritties of Punjab’s IPL 2020 campaign, let’s first see how their group stage went.

There were more lows than highs for Punjab. Here are a few of them.

What if Mayank Agarwal had not gone for an expansive shot when his side needed 1 off 3, what if the umpire had not wrongfully called Chris Jordan for a ‘short run’, what if Punjab had not bottled their chase against Kolkata?

In hindsight, there were at least three such matches which Punjab had no business of losing. They were on top, had the game firmly in their grasp at all times and should have closed it out, but they did not.

1. Against Delhi Capitals, in Match 2 of the IPL, chasing 158 for a win, Mayank Agarwal courtesy a fantastic 60-ball 89 had taken Punjab to the doorstep of a win. Punjab needed 1 to win off 3 balls. A dot and two wickets in consecutive deliveries took the match to a Super Over, which Punjab eventually lost. At the fag end of the chase, the square leg umpire called Chris Jordan for a ‘short run’. Replays later showed that Jordan’s bat was very much in. That 1 run, eventually, made all the difference.

2. In Match 9 against Rajasthan Royals, Punjab had racked up 223/2 in their 20 overs and were in a comfortable position having restricted Rajasthan to 132/2, 14 overs into the chase. Rahul Tewatia who was struggling in the middle at 17 off 23 turned a switch. What can only be described as a once-in-a-lifetime knock, he hit 53 off 31 balls including a 30-run over against Sheldon Cottrell to take his side to the highest successful run-chase in IPL history.

3. This one probably would have hurt Punjab the most. Chasing 165 for a win, Punjab needed 29 off 20 for a win with 9 wickets in hand. Surely, they shouldn’t have lost it from here. But they did, by an agonizing margin of 2 runs.

If we look at it this way, had Punjab got over the line in one of these three games they would have made it to the final four with ease. 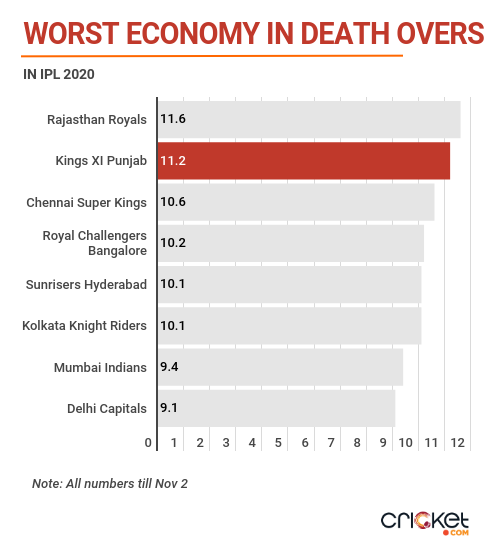 Between overs 16 to 20, Punjab conceded runs at an economy rate of 11.2, which is the second-worst in the entire competition, behind Rajasthan. The number would have been much worse if not for some effective bowling in the last few games by Mohammed Shami & Co. Their balls/wicket ratio of 9.8 was by the far the best between overs 16-20 this season but what they gave away too many boundary balls in between.

Another alarming number was that in the last over of an innings, Punjab on an average conceded runs at an economy rate of 14.9, which was also the worst among all teams.

The Maxwell conundrum and rise of Gayle

Bought for a whopping INR 10.5 crore, in 13 matches, the Australian could only manage 108 runs at an average of 15.43 and a strike rate of 101.9. He hit a total of 9 fours and NO sixes in the entire tournament. Maxwell, who is known as one of the fiercest hitters in world cricket, had the lowest strike-rate in IPL 2020 for a minimum of 100 runs. 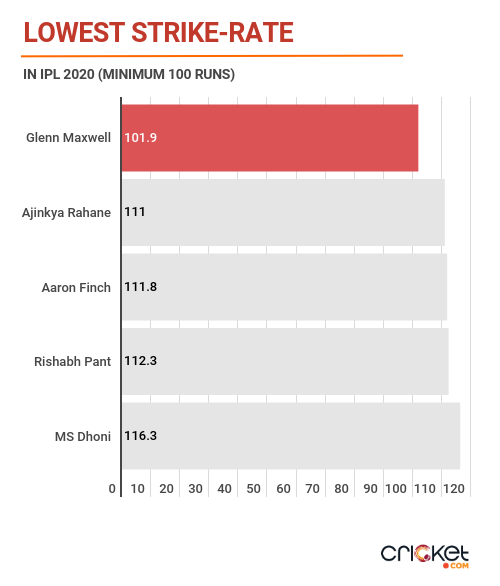 Which begs the question. If Maxwell was so woefully out of form, why did the team management did not pick someone like Chris Gayle earlier in the tournament?

Gayle was finally brought into the side's eighth match into Punjab’s campaign and his presence immediately uplifted the side’s spirits. There was a sudden U-turn in their fortunes as Punjab won each of the first five games Gayle was in the team. More importantly, Gayle performed in almost every single match. In 7 innings, the Jamaican had scores of 45, 21, 13, 20, 51, 99 and 12. He scored 288 runs averaging 41.1 and a strike rate of 137.1.

Punjab had found the missing spark but sadly it came too late for them.

There was not all gloom for Punjab though. The likes of KL Rahul, Mayank Agarwal and Mohammed Shami had their moments all through the tournament and made headlines on more occasions than one. 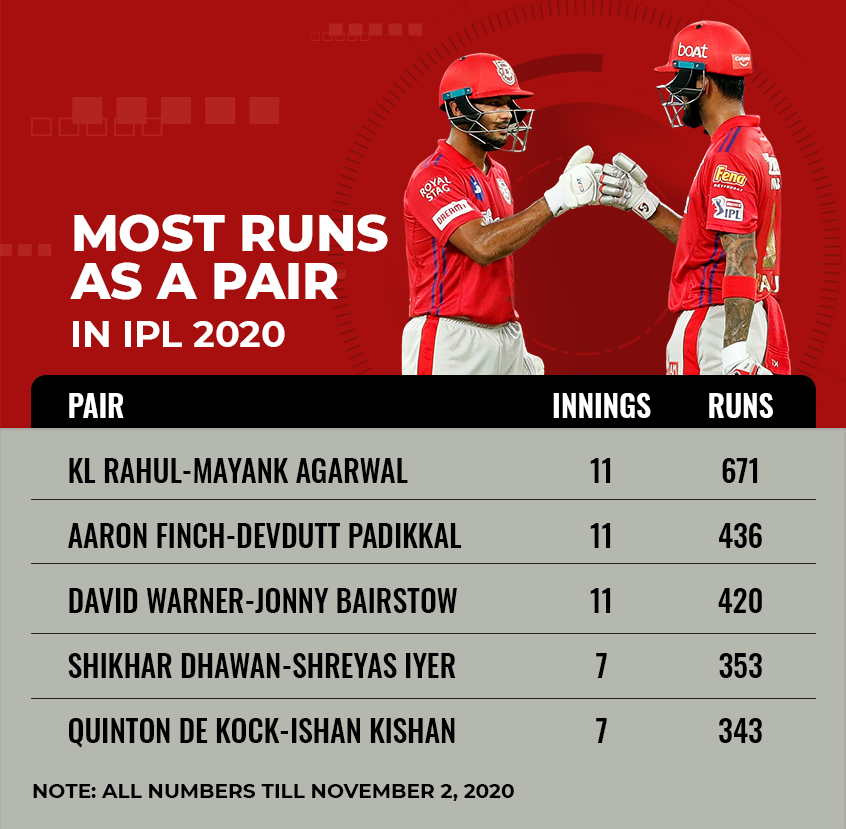 There was an air of inevitability each time KL Rahul and Mayank Agarwal walked out in the middle. The duo, having played with each other for so many years for Karnataka, had an understanding and complemented each other brilliantly. In all, they stitched 671 runs batting together as a pair in 11 innings, averaging 61 which included three 50-run stands and two 100-run partnerships.

Rahul with 670 runs in 14 innings is the current holder of the Orange Cap and there doesn’t seem anyone close by to overtake him. His strike-rates on many occasions were questioned and to be fair an overall strike rate of 129.3 was low. Agarwal, on the other hand, had to miss a few matches due to injury but he still finished as Punjab’s second-highest run-getter with 424 runs to his name in 11 innings at 55.83.

In the first five seasons of IPL (until 2018) Mohammed Shami had played 35 matches picking up 21 wickets. In the last two seasons, Shami has picked up 19 and 20 wickets respectively. This season has been the best for Shami personally. What was most impressive was that he struck with the new ball and at the death. Though Shami has to work on his death bowling, he is one of the positives KXIP can take forward to next season.

The spinning duo of Ravi Bishnoi and Murugan Ashwin did bulk of the bowling in the middle overs and picked up 12 and 10 wickets respectively. Under the mentorship of Anil Kumble these two spinners will prosper in the future. In the bowling department, young Arshdeep Singh warrants an honorable mention for his lion-hearted bowling especially in the death overs.

While Punjab were excellent in crunch situations, not closing games, under-utilization of their middle-order and at times insipid bowling meant they could not make it to the final four. They were led excellently by Rahul, who had a terrific season but will have to somehow find a way to inculcate a quality batting allrounder and a death bowler in their ranks.