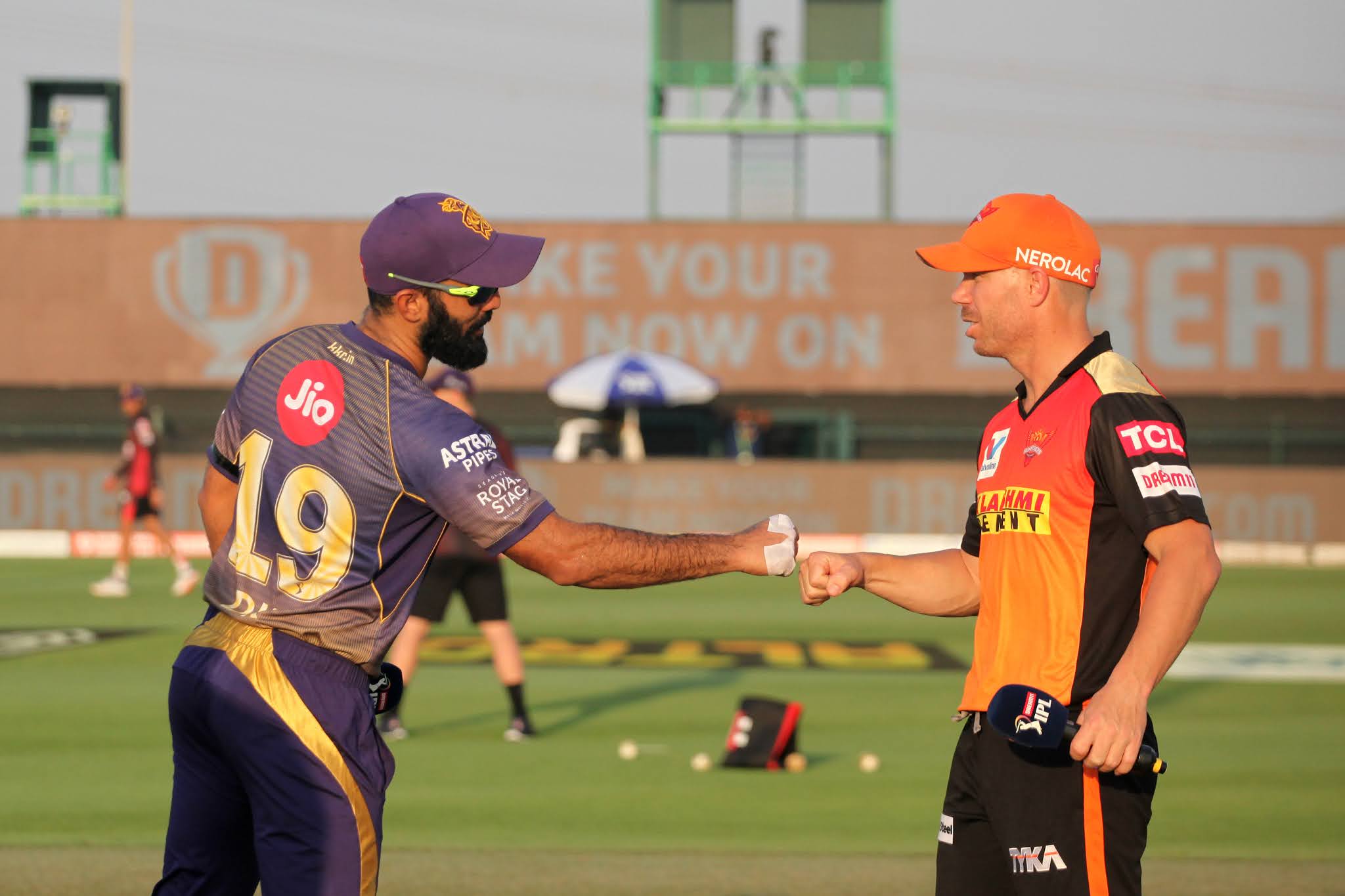 At the halfway mark of the league stage, MI, DC and RCB have flown ahead of the pack. The others are fighting for the last available spot. Let us look at a SWOT analysis of the main contenders. We have analyzed KKR and SRH here. For the other teams refer to this article

KKR have surprised with their performance so far. Not with the results, but the manner of achieving them. Their last two wins, against CSK and KXIP, were the proverbial choking from the opposition.

KKR have done well with the ball while playing outside Sharjah. Their economy rate after the Powerplay in the overs 7-20 is the best in Dubai and Abu Dhabi: 7.91.

Though he has not delivered with the bat, Andre Russell’s record of 14 balls per wicket is among the top-5 bowlers with a minimum of five wickets.

It has been a complete turnaround for KKR with the bat. Being the most dominant team with the bat in the last two seasons, KKR have a run-rate of 8.1 in this season, the lowest among all teams. 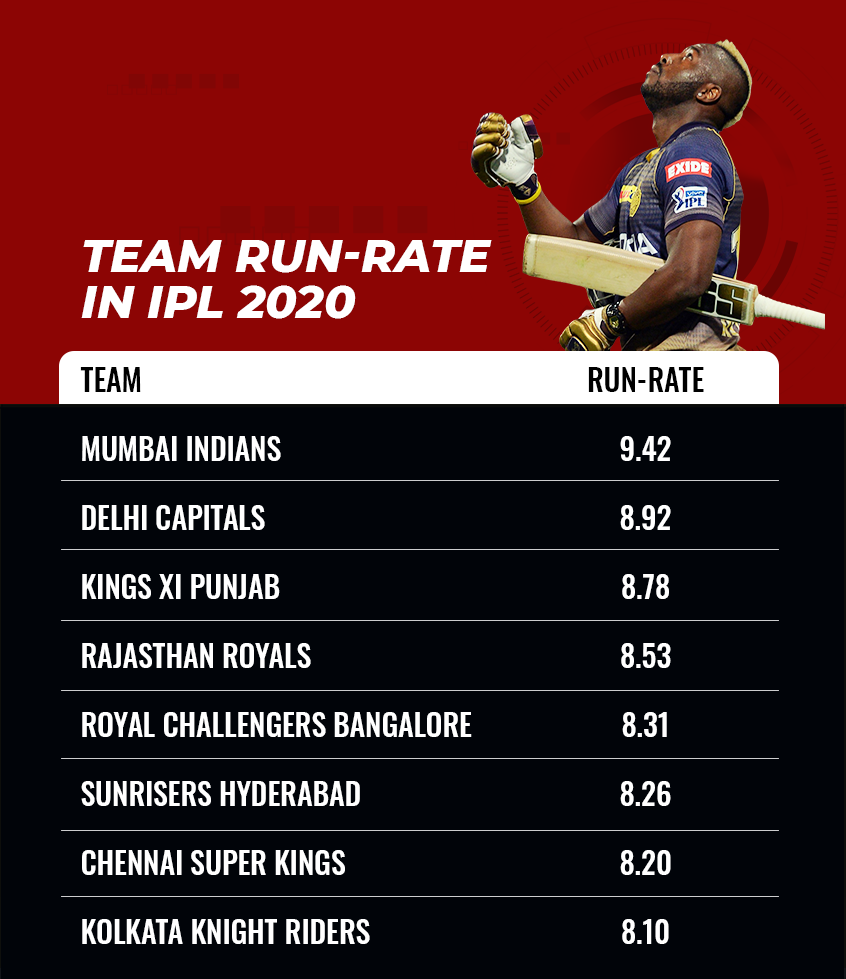 With the ball, they have the highest economy of 7.97 in the Powerplay even outside Sharjah. With two wickets in seven games, Pat Cummins has not been at his best.

All their big guns – Russell, Cummins, Eoin Morgan and Dinesh Karthik are yet to make a significant contribution. They have done well so far without them. The results can improve if they click as well.

KKR have lost to the three best teams and have won against all the teams placed lower than them on the points the table. If they can repeat this performance they will qualify to the top-4.

With his action under the scanner, Sunil Narine’s variations are under a threat. Thus, he might not be as lethal. Moreover, Russell’s issues with fitness can also be a headache for the management.

They have lost both of their games at Sharjah. They have one more game scheduled there, against KXIP. Also, they are the only team of the top-4 that are yet to settle into an XI or a batting order.

Two things will be hurting SRH the most: Bhuvneshwar Kumar’s injury and their defeat against RR in the last game. However, they have a lot of positives in their rank to give a tough fight for the top-4 finish.

Their opening pair of David Warner and Jonny Bairstow continues to dominate the IPL. SRH have a balls per dismissal record of 50.4 balls in the Powerplay which is the best.

Dictating the turning ball, SRH have the second-highest run-rate against spin: 8.31. Both Warner and Bairstow have a strike-rate above 145 against spin so far.

While their top-order includes batsmen from pace heavy nations, they have the lowest run-rate against pace: 8.24. Warner has not been at his fluent best in this season. He has a strike-rate of 111.43 against pace so far, which is the third-lowest among batsmen with 5 or more innings this season. Their number three, Manish Pandey, has a sub-par strike-rate against both pace (129.21) and spin (119.18).

Along expected lines due to lack of power-hitters, SRH have the lowest run-rate at the death: 9.29, and also the lowest balls per dismissal record: 8.7 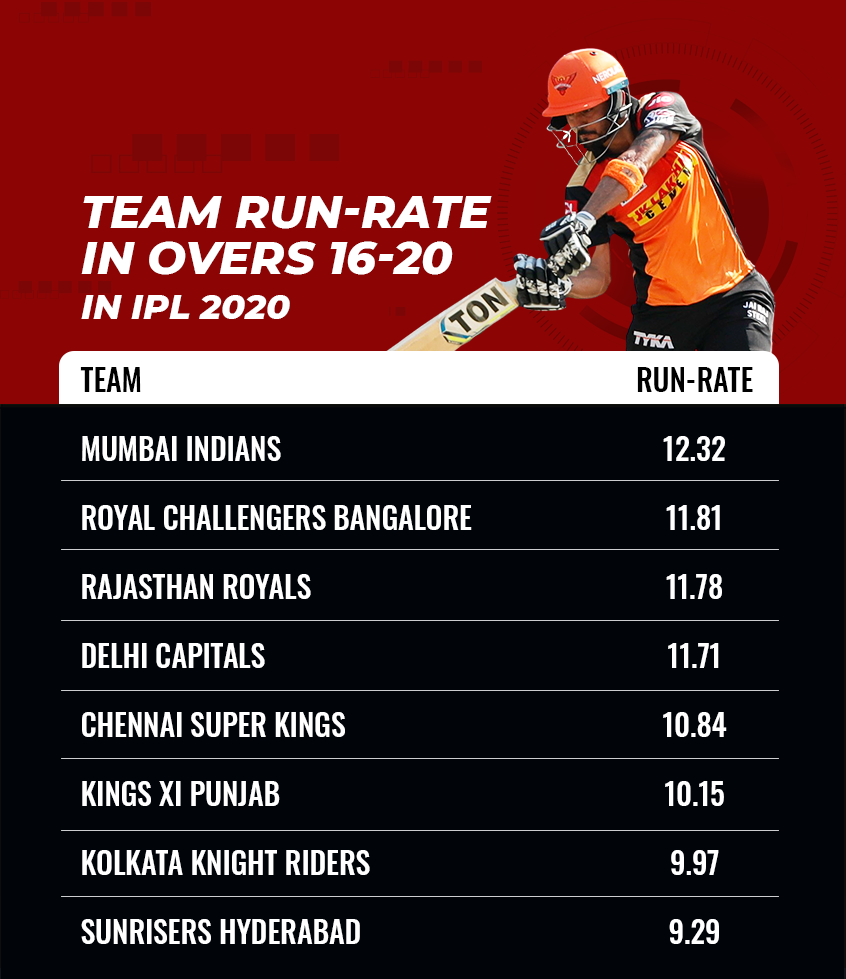 With the ball, their economy at the death is 11.33, which is the third-highest. Both Khaleel Ahmed and Sandeep Sharma have an economy of above 13 at the death.

Kane Williamson is averaging 13.2 balls per match and has a strike-rate of 150.98 against pace. Hence, their top-3 can try and be more aggressive with him waiting at number four.

Also, they have underused Abhishek Sharma so far. He has bowled 7.29 balls and faced 8.57 balls per match on an average so far. If they do not trust him enough, they can replace him with a proper bowler.

SRH need to win five out of the last seven to be safe. Their last three matches are against DC, RCB and MI so they need to get a win in as many matches as possible before that. Also, their last two matches are at Sharjah against teams with much better power-hitters.