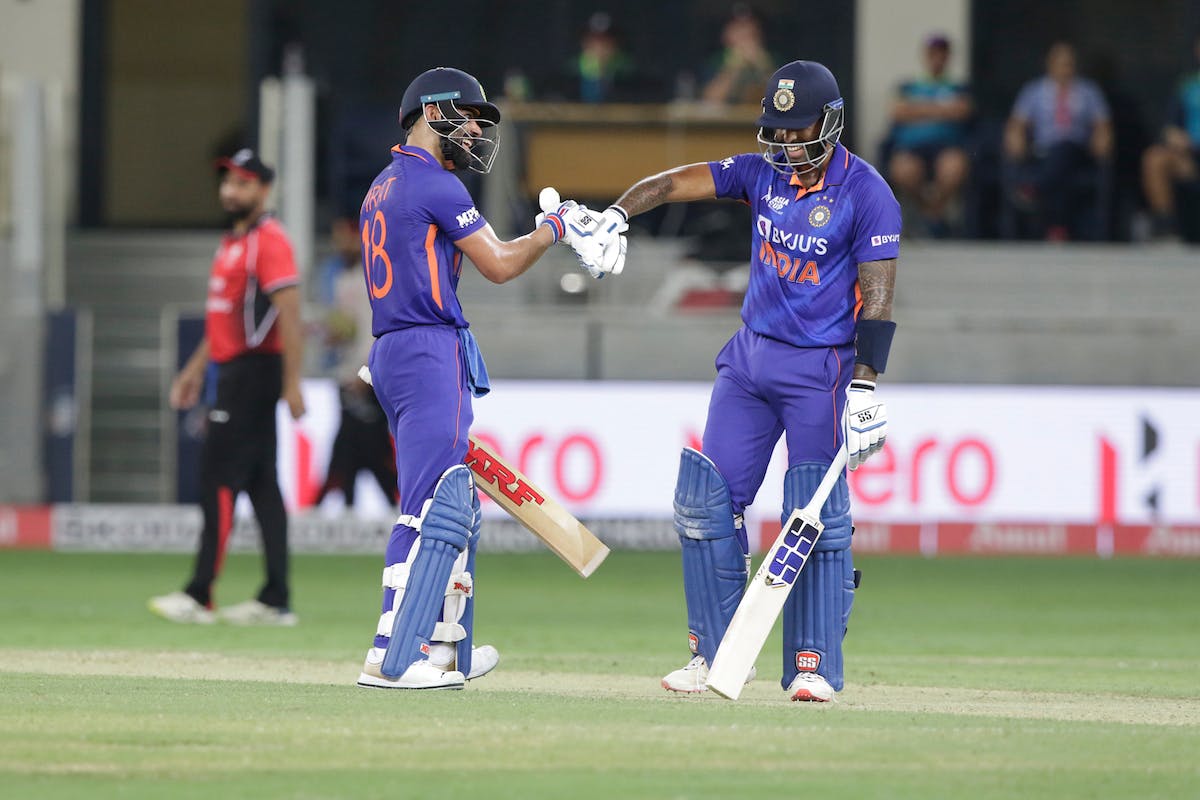 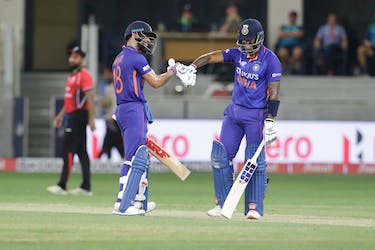 With two victories from two matches, India qualified for the Super Fours from Group A

India were not at their best but Suryakumar Yadav was, his 26-ball 68 paving the way for the defending champions' 40-run victory over Hong Kong and entry into the Super 4 of the Asia Cup here on Wednesday.

Hong Kong were off to a good start with the bat, but the 193-run target proved to be too much for them, ending at 152 for five in the stipulated 20 overs.

Suryakumar orchestrated the carnage while Kohli made an unbeaten 59 from 44 balls, his first international fifty in more than six months, as India amassed 78 runs in the final five overs.

Arshdeep Singh (1/44) gave the breakthrough, while Ravindra Jadeja effected a direct hit to remove skipper Nizakat Khan and then dismissed their top-scorer Bahar Hayat (41) to derail their chase.

Hong Kong's scoring rate dropped considerably after the powerplay, with just 14 runs coming in four overs, and the Indian spinners made things difficult with Jadeja (1/15 in 4 overs) leading the show in a tidy spell, three days after he impressed with the bat against Pakistan.

This was India's fifth consecutive win in T20Is as they entered the Super 4 as Group A toppers with two victories from as many matches. India defeated Pakistan by five wickets in their opener here on Sunday.

Hong Kong and Pakistan will battle it out at Sharjah on Friday to vie for the second slot from Group A. Put in on a two-paced wicket, the famed Indian top-order in skipper Rohit Sharma (21) and his deputy KL Rahul (36) struggled to break free against their inexperienced rivals.

Rahul, who is coming back from an injury layoff, looked out of sorts and consumed 39 balls for his 36. Of his two sixes, one came off a free-hit as the Indian vice-captain allowed pressure to mount on his skipper, who was the first to get out.

Rohit departed for a 13-ball 21, but not before becoming the first to get past 3500 runs in T20Is. Rohit also crossed 12000 runs as an opener in international cricket, the second fastest after Sachin Tendulkar.

Under pressure to break free, Rahul eventually perished, sweeping a delivery outside off to get an edge behind the stumps. Then, Suryakumar showed how it's done. The game's complexion changed in no time with Suryakumar's fireworks lighting up the Dubai skyline.

Hong Kong bowlers had no answer to Surkyakumar's 360-degree shots and last-minute improvisation. At the other end, Kohli looked fluent and got to his first half-century in international cricket since his 52 against the West Indies in at T20I in Kolkata on February 18.

Having shown his intent in a 34-ball 35 against Pakistan on Sunday, Kohli played the sheet anchor role en route to his 31st T20I fifty. In no time Suryakumar joined Kohli and overshadowed the former skipper.

Batting on 42, Suryakumar smashed Haroon Arshad for four sixes from five balls in the final over, which yielded India 26 runs. He got to his sixth T20I fifty in just 22 balls, his fastest.

The pair added 98 runs in an unbroken third-wicket partnership that came from just 42 balls. India stepped up in style in the final five overs, which got them 78 runs.