CSK roar back with a 10-wicket win over KXIP 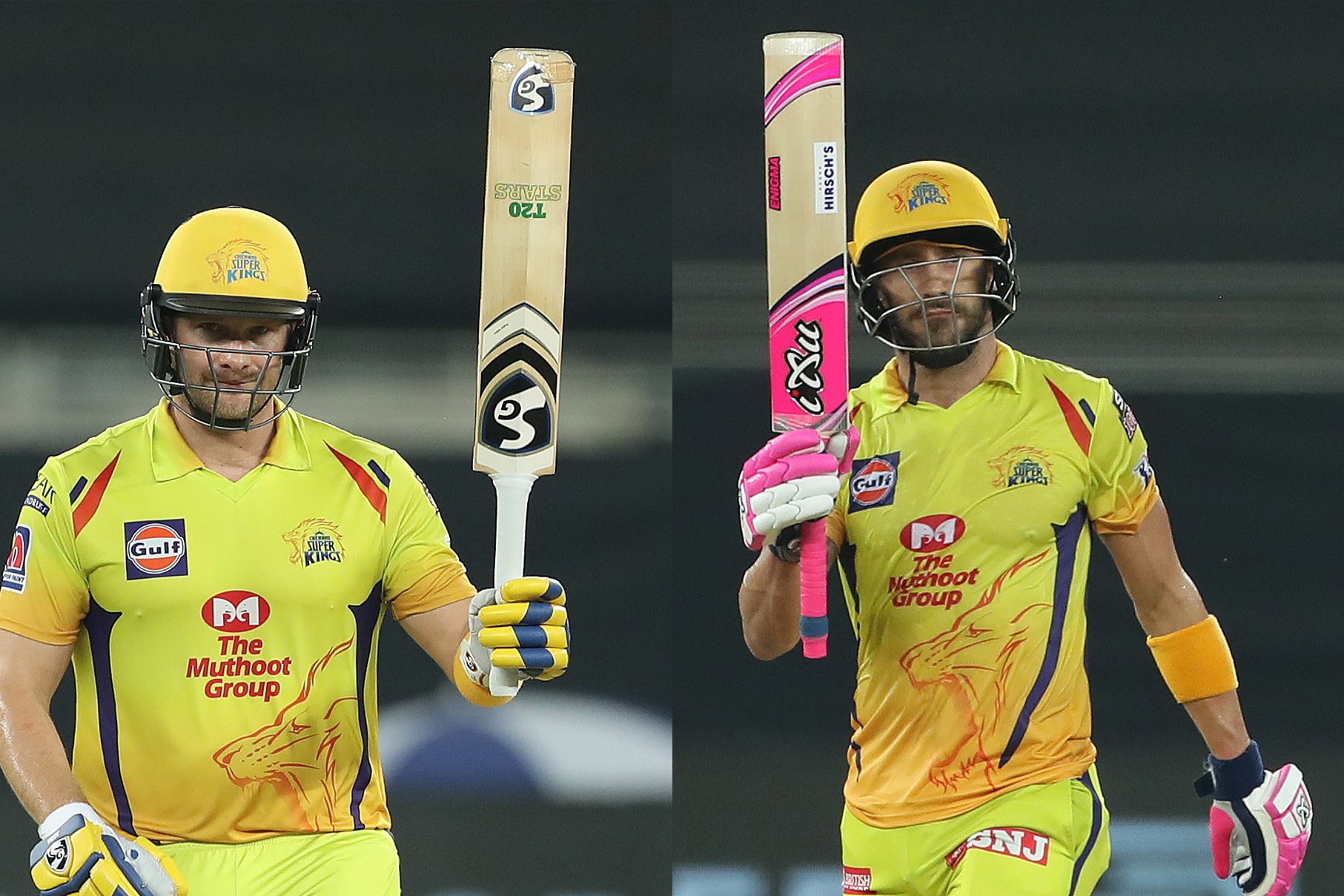 CSK roar back with a 10-wicket win over KXIP

First team to win while chasing in Dubai, second-highest 10-wicket victory, highest partnership for any wicket against Kings XI Punjab. Over the years, Chennai Super Kings has created such an aura around themselves that shrugging them off as title contenders always seem to be a big mistake. Losing three games in a row in the beginning challenged that perception but with a 10-wicket win over KXIP, CSK have roared back into the competition in style.

Barely 26 hours before the game, Shane Watson tweeted that the perfect game for CSK is coming soon and today he was at the helm of carving out that perfection in a 181-run opening stand with Faf du Plessis. Chasing 179, Watson left the string of slow starts and dismal scores behind him by going after Sheldon Cottrell in the first over itself. He struck him for two boundaries before du Plessis joined in the party carting Chris Jordan for four boundaries in the sixth over, thus ending the Powerplay on a good note for CSK, a vast contrast from their previous game against Sunrisers Hyderabad when he was run out of the last ball.

As a result, CSK were 60 for no loss in the Powerplay, their best score in the field restrictions’ phase as yet, even surpassing their effort in Sharjah where they had put on 53 runs on the board. For a team that had the second-lowest run-rate in the Powerplay before this game, a much-improved start set the right tone to execute the chase.

The opening duo went from strength to strength once the field was spread out. Despite a decent start, Watson had ended the Powerplay phase at a strike-rate of 115.8. Gaining confidence, Watson spread his arms striking Ravi Bishnoi for a 101-metre long six in the ninth over - the first in CSK’s innings after a flurry of boundaries. Du Plessis took the back seat letting Watson do his thing but maintained a decent strike-rate for himself. The duo ensured the run-rate stays above 10 for a major part of the innings as the KXIP bowling unit capsized under pressure.

KXIP skipper, KL Rahul tried everything including placing himself behind the umpire to disturb Watson’s rhythm but nothing worked in their favour. Bishnoi tried bowling over the wicket by running in diagonally from the umpire but it was just another effort in vain.

By the time the duo completed 150 runs in the 15th over, it was just a formality. Du Plessis picked up scoring 24 off the next 31 runs in a matter of 10 balls. His one-handed six over covers spoke for his rich vein of form as the South African outscored his more dominant Aussie partner ending with 87* off 53 balls in comparison to Watson’s 83* from the same number of deliveries. This is also the highest partnership for any wicket by a CSK pair.

While the trigger for this emphatic victory came via an ameliorated batting performance, it was not the only facet where CSK lifted themselves. Earlier in the game, showed a lot of heart to pull the game back with the ball in the death. 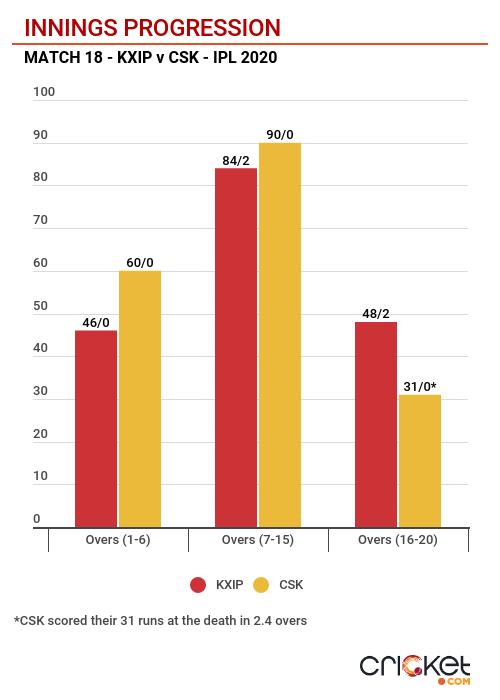 Rahul and Nicholas Pooran had set themselves for a grand finish with the bat. The way began the phase - 11 runs each of the 16th and the 17th over - things seemed ominous for MS Dhoni's men. However, Shardul Thakur's twin strikes in his third over (18th of the innings) paved the way for CSK's comeback. He sent back Pooran (16-ball 27) and Rahul (52-ball 63) on back to back deliveries which jolted KXIP's progress. Pooran was caught by Jadeja at deep mid-wicket and Rahul edged a wide delivery to Dhoni who became only the second wicket-keeper to pouch 100 catches behind the stumps.

Given Dubai has been a tough venue for batsmen to hit from the word go, Sarfaraz Khan and Glenn Maxwell still added 28 runs from the remaining 16 deliveries. Although, it was still going to be a tough challenge for their team which has been carrying the tried and failed blueprint of the Bangalore squad of yesteryears.

For KXIP, it was yet another sedate but solid start with the bat engineered by Rahul and Mayank Agarwal. Akin to CSK’s opening pair, Mayank and Rahul also batted through the Powerplay but failed to imbue the innings with any momentum. Mayank holed out at deep mid-wicket off Piyush Chawla’s first delivery in the match in the ninth over.

Mandeep Singh, replacing Karun Nair in the XI, provided a much-needed pump to their run-rate which had been following the trajectory of a flat-line until he deposited Chawla for two sixes in the 11th over. Rahul, on the other hand, showed little intent collecting 38 runs from 29 balls in the middle phase of the innings. He completed his fifty with a six off Thakur in the 15th over. Although, his 46-ball fifty is now the slowest fifty in the season thus far.

Mandeep, though, wasted a great start by finding Ambati Rayudu at covers of a sweetly timed drive off Ravindra Jadeja. Pooran was the other major contributor to KXIP’s innings stroking a 17-ball 33 adorned with three sixes.

The result of this game means KXIP will languish at the bottom of the table after playing five games - a dangerous territory to be in. CSK have ascended to the sixth spot and with their trust in Watson paying off, they will aim to surge further up to maintain their pristine record of finishing in Top 4 every season.