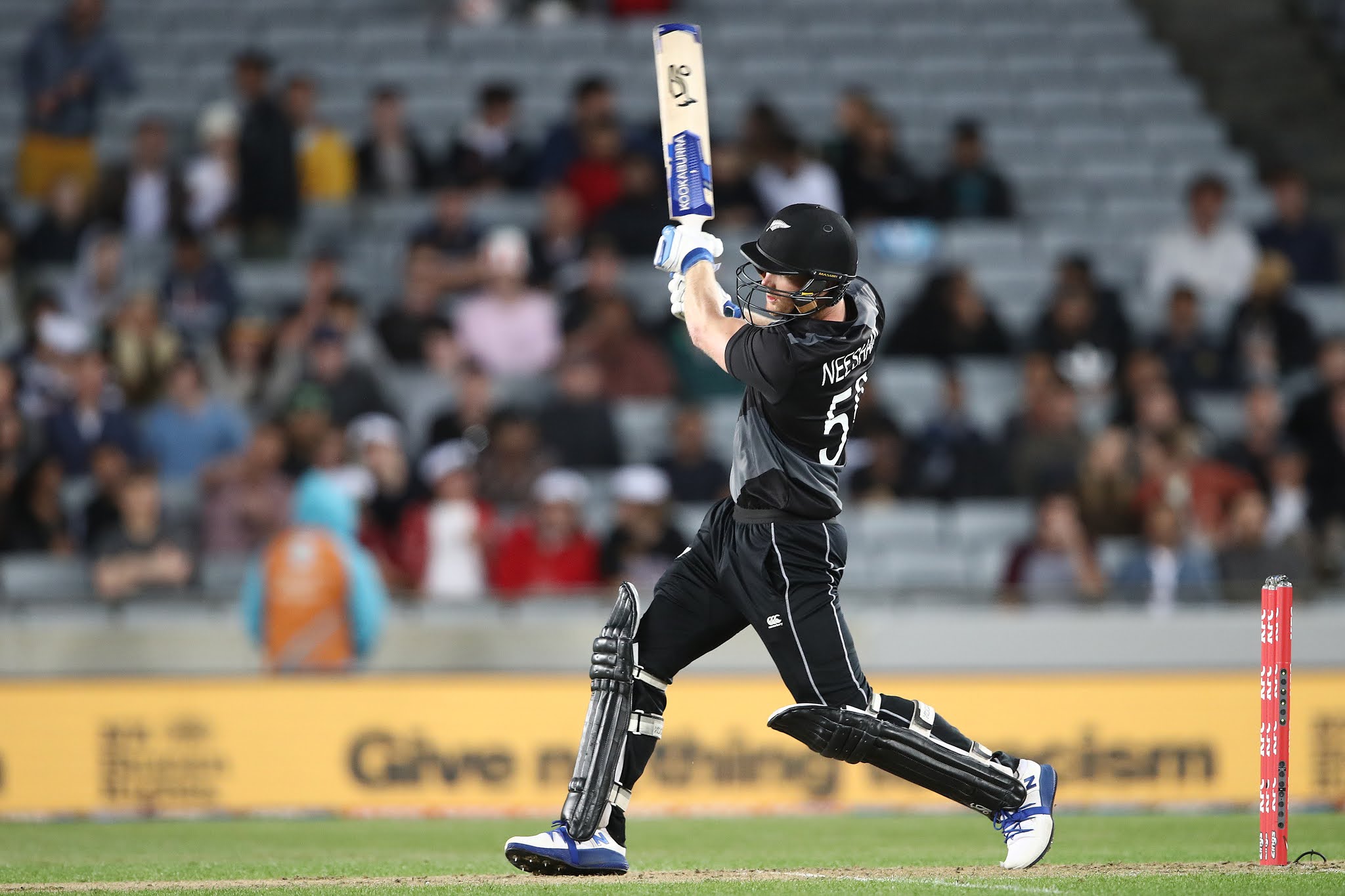 Inspired by Lockie Ferguson's five-for, the hosts won by five wickets to take a 1-0 lead in the three-match series

When it comes to films, there are some action thrillers that keep you engaged from the first second to the last, where every moment keeps you hooked on because there is something remarkable happening all the time. The first T20 International between New Zealand and West Indies at Eden Park in Auckland on Friday (27 November 2020) was cricket’s equivalent of a top-notch action thriller.

359 runs in 188 deliveries. 12 wickets. 23 sixes. 10 no-balls. This match had it all. Apart from when the rain played spoilsport, it was an enthralling contest from start to finish.

Heading into this match, the team batting second had won six of the previous eight T20Is at Eden Park so New Zealand captain Tim Southee’s decision to bowl first didn’t come as much of a surprise. And that call proved to be the right one as the hosts ended up victorious by five wickets.

The Kiwis skipper, though, started poorly with the ball, bowling two wides to begin proceedings. Andre Fletcher then scored the first runs off the bat with a boundary through the cover region. But just four legal deliveries into the match, play had to be stopped due to a drizzle.

Soon enough, the players returned and Fletcher immediately took the attack to debutant Kyle Jamieson, hitting two consecutive sixes. Despite another rain interruption at the end of the second over, the West Indies openers didn't lose momentum as they took Hamish Bennett for 29 runs off his first over. With 55 runs on the board from the first three overs, the team from the Caribbean seemed set to post a monumental total. But a certain Lockie Ferguson had other ideas.

Ferguson has been New Zealand's key bowler in white-ball cricket in recent years and he showed his class once again here. After West Indies’ brilliant start, the right-arm pacer took the important wickets of Andre Fletcher and Shimron Hetmyer to bring the hosts right back into the contest. And that was not all.

Over a period of 12 deliveries at the time, West Indies would lose five wickets for just one run. Southee followed Ferguson's lead with two wickets off an over as well, before the latter returned to dismiss Nicholas Pooran for one. From 58/0, the visitors had succumbed to 59/5.

West Indies captain Kieron Pollard and Fabian Allen then led a fightback with an 84-run partnership for the sixth wicket. During that period, there was a third rain delay which saw the match reduced to a 16 overs per side affair.

Just when Pollard and Allen seemed to be taking the game away from the home team, Ferguson returned to put the brakes on the West Indies innings once again, taking the wickets of Allen and Keemo Paul in quick succession. Ferguson ended his spell with bowling figures of 5/21, only the second five-wicket haul by a New Zealand bowler in men's T20Is.

Despite Ferguson's heroics, West Indies managed to put up a mammoth total of 180/7 in their 16 overs mainly thanks to a magnificent effort from Pollard. The West Indies skipper brought up his fifty in 30 deliveries and ended his innings unbeaten on 75 from just 37 deliveries, his best score in T20Is.

While West Indies scored 180 in their 16 overs, New Zealand were given a reduced target of 176 with the DLS method coming into play.

In defence of the target, the away side got off to a great start with Sheldon Cottrell dismissing Martin Guptill in the first over of the innings. While Tim Seifert began in positive fashion, he had to head back to the pavillion soon after as well, with Oshane Thomas picking up the wicket.

Glenn Phillips, struggling with an injury, then took 22 runs off the final over of the Powerplay which was bowled by Allen. And with that, New Zealand had a decent platform despite the loss of a couple of wickets early on.

West Indies, though, would soon find themselves back in the driver’s seat, with Thomas dismissing the dangerous Phillips. Ross Taylor then struggled during his short stay at the crease before he was run-out without troubling the scorers.

In a match that was swinging one way and then the other, it was New Zealand’s turn to mount a fightback. Devon Conway and James Neesham put on an aggressive partnership to bring the Black Caps right back into the contest after the quick loss of wickets had seen them fall behind the eight ball.

Debutant Conway impressed with a 29-ball 41 while Neesham managed his best score (48*) in T20Is to date. The duo added 77 runs for the fifth wicket which put New Zealand on the front foot once again.

With a few of his bowlers leaking runs, Kieron Pollard brought himself into the bowling attack and that proved to be a masterful move as he got the wicket of Conway at a crucial stage of the game. There was an opening for West Indies, but Mitchell Santner ensured that the Kiwis remained in command with a few lofty hits.

Both teams had issues with no-balls through the match and that was particularly outlined when Keemo Paul bowled four no-balls – one for overstepping and three for high full-tosses (a wet outfield was far from ideal for the bowlers) – in the 14th over of the New Zealand innings. That proved costly for West Indies as a 14-run over at the time put the hosts in complete control of the run-chase.

New Zealand eventually won with four deliveries to spare, hence ending a seven-match losing streak in T20Is. With the Southee-led side gaining a 1-0 lead, the two teams will now move to Mount Maunganui for the second game of the series which is scheduled for Sunday (29 November 2020).

REPORT
Third T20I between New Zealand and West Indies called off due to rain
Only 2.2 overs were bowled before rain halted proceedings in the final match of the series