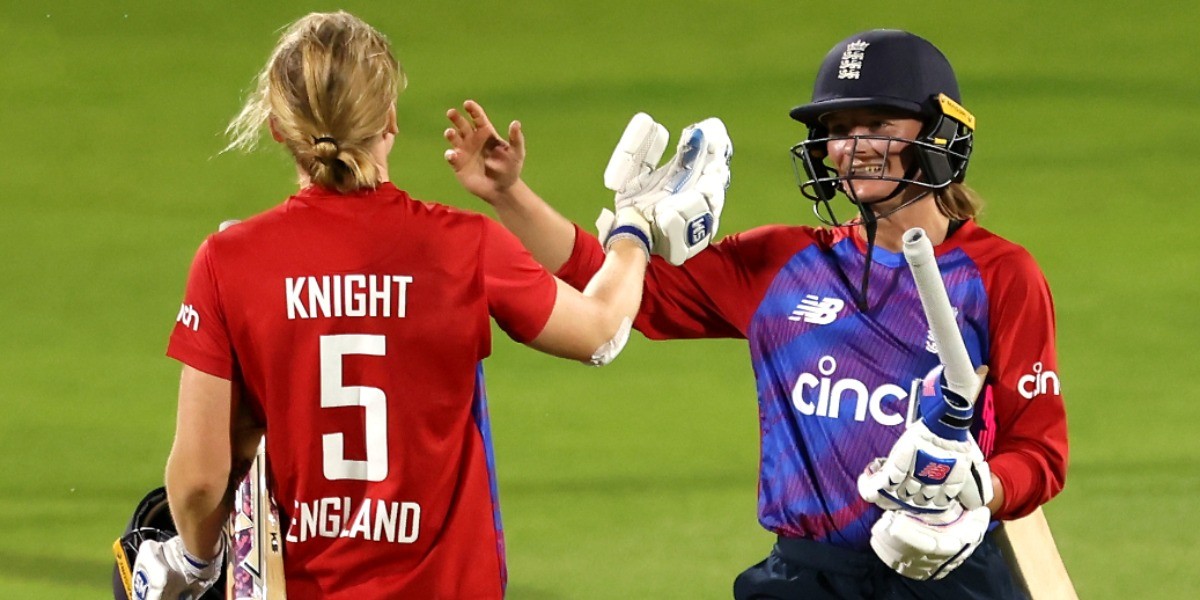 Here are a few noteworthy stats from the third T20I between England Women and India Women at County Ground, Chelmsford

After losing the ODI series, India made a good comeback in the shortest format. Though they lost the first T20I, they came back strongly in the second. Choosing to bat first in the decider, India were struck with early blows as Shafali Verma was dismissed for a duck and Harleen Deol for six. But, the skipper Harmanpreet Kaur and Smriti Mandhana resurrected the innings with a 68-run partnership for the third wicket. Even after the dismissal of Kaur, Mandhana was in charge and scored 70 runs off 51 balls. India managed to post 153 runs on the back of Richa Ghosh’s cameo.

What looked like a good total to defend was nullified by an aggressive Danielle Wyatt’s unbeaten 89 of 56 balls. She was equally supported by Natalie Sciver, who herself scored 36-ball 42. The 112-run partnership for the second wicket dented India’s hope of ending the tour with a high note. England won 2-1 to grab a hold of both the limited overs series. Here are a few notable stats form the third T20I:

Most ducks as an opener

For Shafali Verma, her short career has been a mixed bagu. She is undeniably a supreme young talent, but her temperament is under the scanner. In the first T20I, she was dismissed for a duck in the first over in one of the most awkward ways. Today as well, an inside edge while looking to swipe across the line in the first over fetched her the fourth duck of her career. This is the most ducks an Indian opener has suffered in W-T20Is.

After losing two early wickets in the Powerplay, India needed a partnership badly and Mandhana and Kaur were up to the task. They started slowly but accelerated towards the 10th over. The pair put on a 68-run partnership for the third wicket. This was the seventh time in W-T20Is the pair had put on a 50+ partnership, which is the joint-most alongside Mandhana and Mithali Raj.

As an opener, when one partner is dismissed for a duck and that too of the second ball, it somewhere demoralizes the other. But, Mandhana was not one of them to be bogged down. She became the third Indian opener to score a 50+ after one of the opening partners registered a duck. More to her glory, her score of 70 is the highest among Indians and the fourth-highest overall in W-T20Is when the partner was dismissed for a ducl.

A target of 154 is a defendable one, but Wyatt had other intentions. From the start, she had an aggressive approach, especially against the spinners. This is not the first time, Wyatt has this tendency of being the perfect chaser in T20Is. Her unbeaten 89 was the third instance of her scoring 75+ runs in a chase. No other batter in W-T20Is has achieved this feat. Not only that, in the top three chases for England in which Wyatt was a part of the XI, she has been the "Player of the Match" in all three (199 vs IND – Mumbai, 2018, 179 vs AUS – Canberra, 2017 and 154 vs IND – Chelmsford, 2021).

The Indian Women’s side is well known for its strong bowling attack. This is one of the reasons why a 100-run partnership against India is a difficult one, especially in a chase. Sciver and Wyatt posted a 112-run partnership for the second wicket, which is only the second time India had conceded a century stand while defending. The other instance also involves England batters. Charlotte Edwards and Sarah Taylor had posted an unbeaten 113 runs for the opening wicket in Taunton in 2009.