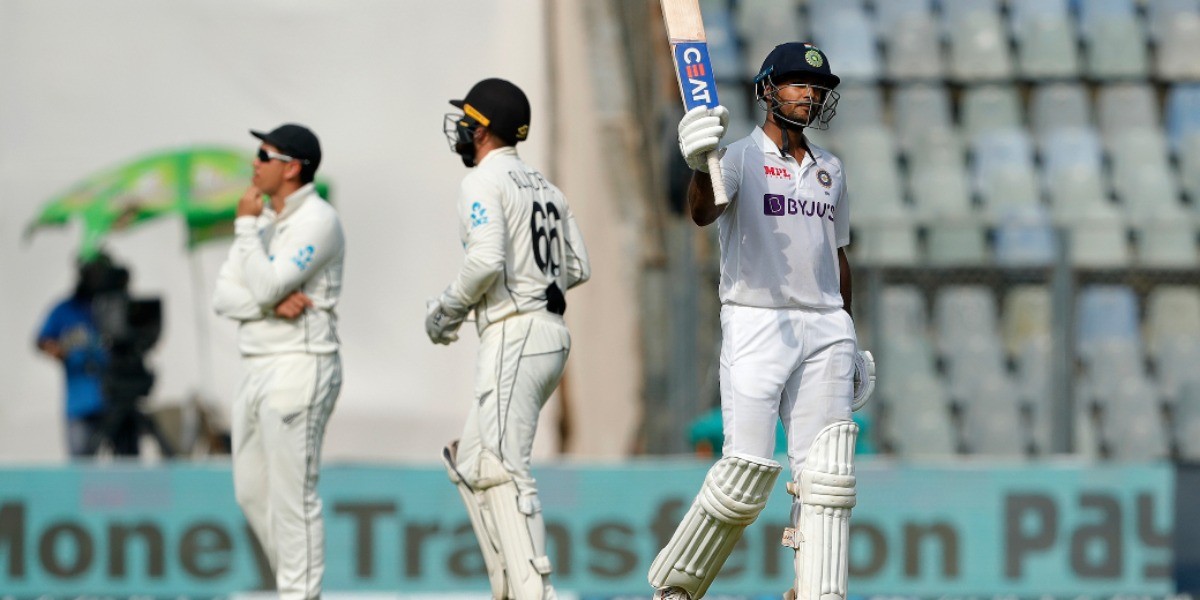 Torrential rains in Mumbai for two days prior to the start of the second Test witnessed a delayed start, despite of bright sunshine, losing the whole of first session. The returning captain, Virat Kohli, won the toss and made it a clean sweep of five toss wins for India in this tour. The Indian openers, Shubman Gill and Mayank Agarwal provided an exceptional start as they stitched an 80-run partnership. However, the dismissal of Gill saw a mini collapse as Cheteshwar Pujara and Virat Kohli departed for ducks. The burden once again was on Shreyas Iyer to help India recalibrate the innings. Mayank alongside Iyer forged a valuable partnership of 80 for the fourth wicket before Iyer fell prey to Ajaz Patel. Wriddhiman Saha, high on confidence from his unbeaten 61 in the second innings saw through the day for India with Mayank. Mayank was the star of the day with his fourth Test century. Here are a few notable stats from day one:

A long due 50+ opening partnership

India has a plethora of openers wanting to make a mark in Test cricket. However, post the 317-run opening stand against South Africa in 2019 between Rohit Sharma and Mayank in Visakhapatnam, it was all about individual performances of the openers. There were no 50+ opening stands for 13 innings after that 317-run stand, till Mayank and Gill’s 80-run partnership in this match. In home Tests, only once has there been a bigger gap and that was between 1983 and 1985 where India suffered 15 innings without a 50+ opening stand. From 2005 till 2007 also there was a drought of 13 innings without one.

The characteristics of Rahul Dravid and Cheteshwar Pujara aren’t of much difference. Both are number three batters who have the capabilities to grind for a long time and love to score big and this is one of the reasons why Pujara was deemed as the second version of Dravid. However, in recent times, Pujara has endured a poor run. His last century came in Sydney in 2019 when he scored 193. Post that innings, he is undergoing a barren streak of 40 innings without a century, all of those 40 innings at number three. This is the most innings between a century for a number three batter in Tests. 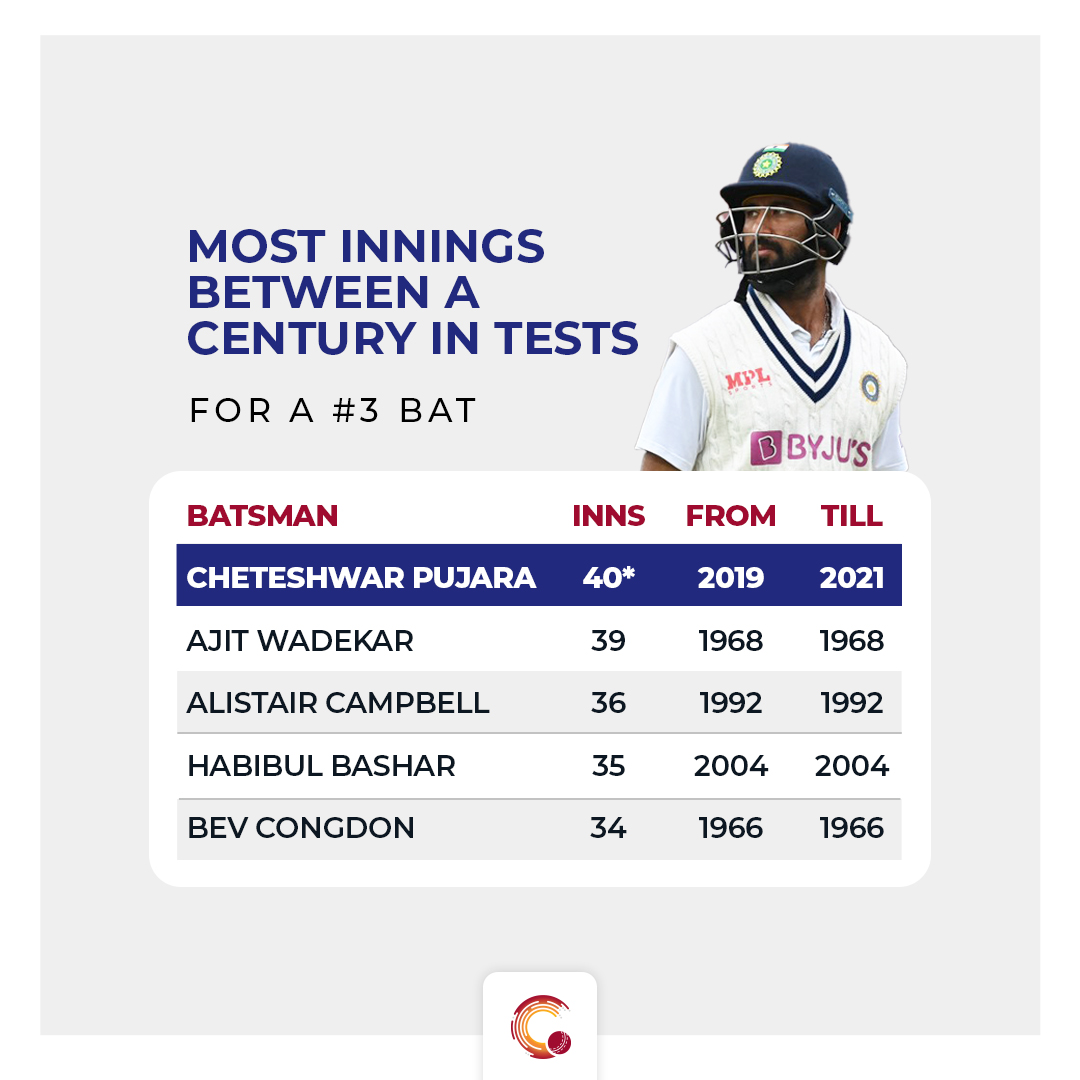 Duck tales for number three and four batters for India

India’s most bankable batsmen Kohli and Pujara have undergone a lean patch. In today’s innings, they endured another disastrous feat as both suffered a duck. In Tests, this is the seventh time India’s number three and number batters were packed off for a duck, third at home. The last time India went through this fate was in 2018 against Australia in Melbourne when Pat Cummins dismissed both Pujara and Kohli for a duck. At home, it was way back in 1994 against the West Indies at the same venue. To add more, out of the seven times, this is only the second time a spinner has dismissed both three and four batsmen for duck in the same innings. Roy Tattersall in 1952 is the other spinner.

The year 2021 has been an anguish in Kohli’s illustrious career. In 16 matches, he has averaged just 27.9 with four ducks including today. The four ducks are the most for a top order batsman (1-7) as a captain in a calendar year. To add salt to injury, this was his sixth duck at home as a captain, which is the joint most for a captain at home. That’s not it, this was his 12th duck while batting at number four, the most for an Indian number four batsman, going past Sachin Tendulkar’s tally of 11. 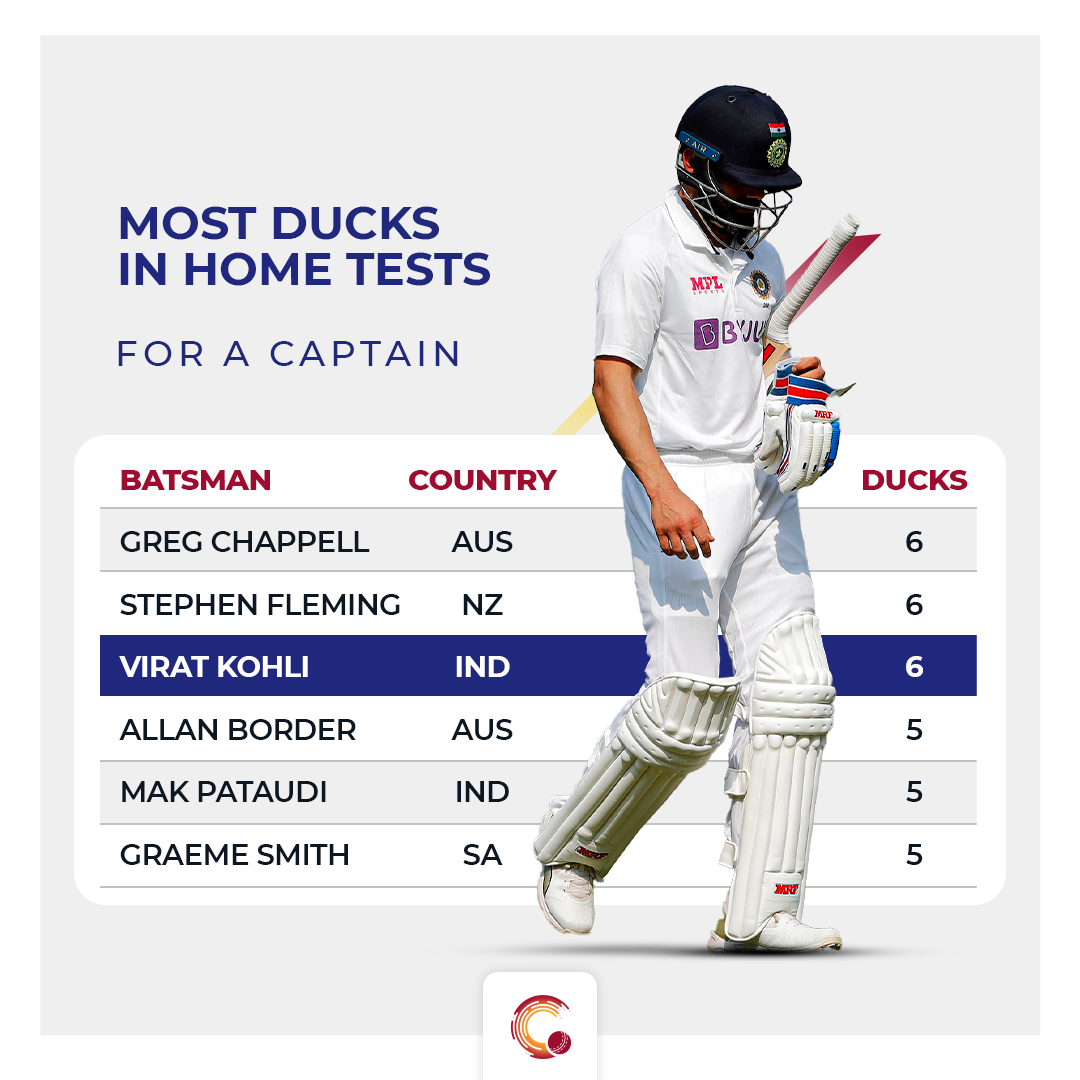 In his short Test career, Mayank has had exceptional numbers as a batsman at home. He has been decent in away conditions, but his numbers at home precedes those. In seven home Tests, Mayank has scored close to 750 runs with four centuries that includes two double centuries. The four centuries hit by him are the joint most for an Indian batsman in the first seven home games. Vijay Hazare and Mohammad Azharuddin also had four.