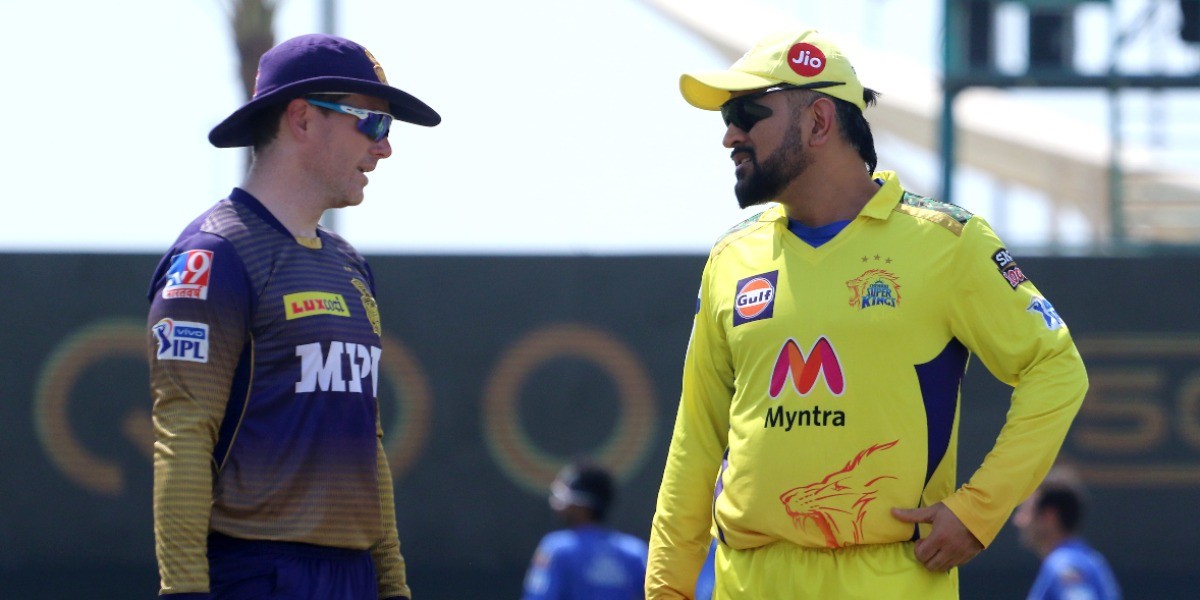 The year started with India beating Australia with what many believed to be a second string side. It was an extraordinary result that would be remembered for generations. Kolkata Knight Riders’ revival in the 2021 IPL runs in symphony with that outcome. After five defeats in the first seven games, they are the headline story of the UAE leg.

They have won seven out of nine matches in UAE. They have ousted title contenders like Mumbai, Bangalore and Delhi. They are in the final, their first since 2014. Co-incidentally, they had a similar kind of campaign back then. The tournament was split between UAE and India. Kolkata won nine on a trot in the second half to clinch their second title.

Chennai Super Kings, on the other hand, are set for their ninth IPL final. They came seventh last year. Skipper MS Dhoni promised the fans to come back stronger and they were the first team to get to the final this time.

Thus, the theme for this year’s final is 'turnaround'.

Different challenge for KKR in Dubai

A key element in Kolkata’s resurgence is how they embraced Sharjah. The mystery spin of Sunil Narine and Varun Chakravarthy was too hot to handle for the opposition. The pacers bowled hard lengths leaving the trickery part to the sluggish track. Kolkata played four matches in Sharjah with a 100 percent win record. It takes you back to their glory days in early 2010s when they would spin a web around the opposition on languid tracks.

Moving to Dubai will make them tinker their plans. They have played only two matches in Dubai, both against lower ranked teams in the season - Punjab and Hyderabad.

In addition, it is a two-paced track where the teams batting first have scored over 160 on seven occasions while the other four instances have seen scores below 140. The track may or may not slow down.

Toss becomes a crucial factor in such matches. Both teams will prefer to chase. Chennai are yet to lose a game while chasing this season. Kolkata have a 100 percent win record in run chases in the UAE leg.

The similar path to success

A similar ingredient in both team’s success has been their openers. Except Punjab, whose reliance at the top of the order is appallingly high, Chennai and Kolkata have the highest percentage of runs from their opening batsmen. 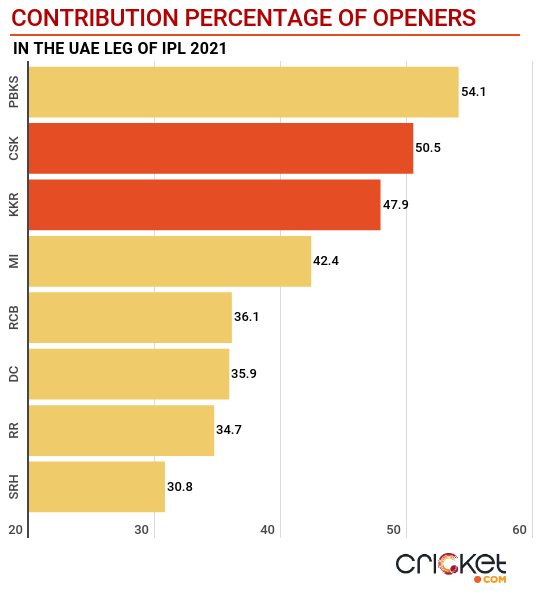 Kolkata are marred by low returns from Eoin Morgan and Dinesh Karthik while Chennai, despite a deep batting line-up, have dwindled when both openers are dismissed early.

Venkatesh Iyer has overturned Kolkata’s fortunes at the top of the innings. He did not play a single game in the first leg, where the team averaged 25.8 at 7.4 runs per over in the Powerplay. Coming to UAE, where Iyer and Shuman Gill have opened throughout, the average has risen to 53.8 at 8 runs per over. Iyer is the highest scorer in the Powerplay phase in the UAE leg - 181 runs at an average of 60.3. Gill comes second with 165 runs at 41.3 runs per dismissal.

The Kolkata top-order have uninspiring results against slower deliveries. Against off-cutter, the most basic variation of a slower ball, Gill averages only 10.3, Iyer 17.5 and Rahul Tripathi 5.5. Each one of Deepak Chahar, Shardul Tahkur and Dwayne Bravo possess decent off-cutters. Although, it would be interesting to see if the Dubai pitch offers enough grip to cutters with the new ball.

For Chennai, Ruturaj Gaikwad and Faf du Plessis form the only opening duo this season where both partners have in excess of 500 runs. Gaikwad is in the race for the Orange Cap, only 24 runs away from surpassing KL Rahul.

Gaikwad’s brilliance against tweakers can rattle Kolkata’s spin strategy, making him a key wicket. While Kolkata’s top-order has struggled against cutters, bouncers are the way to go against Gaikwad. The right-hander has faced only four bouncers this season and has been dismissed thrice, all of them in the Powerplay. Hence, Eoin Morgan might start with pace this time and ask Shivam Mavi or Lockie Ferguson to bounce him out.

The pairing of Chakravarthy and Narine has elevated Kolkata to the best spin bowling unit in IPL 2021 with 36 wickets. Shakib Al Hasan’s addition also helped. They have indomitable numbers in the second installment. 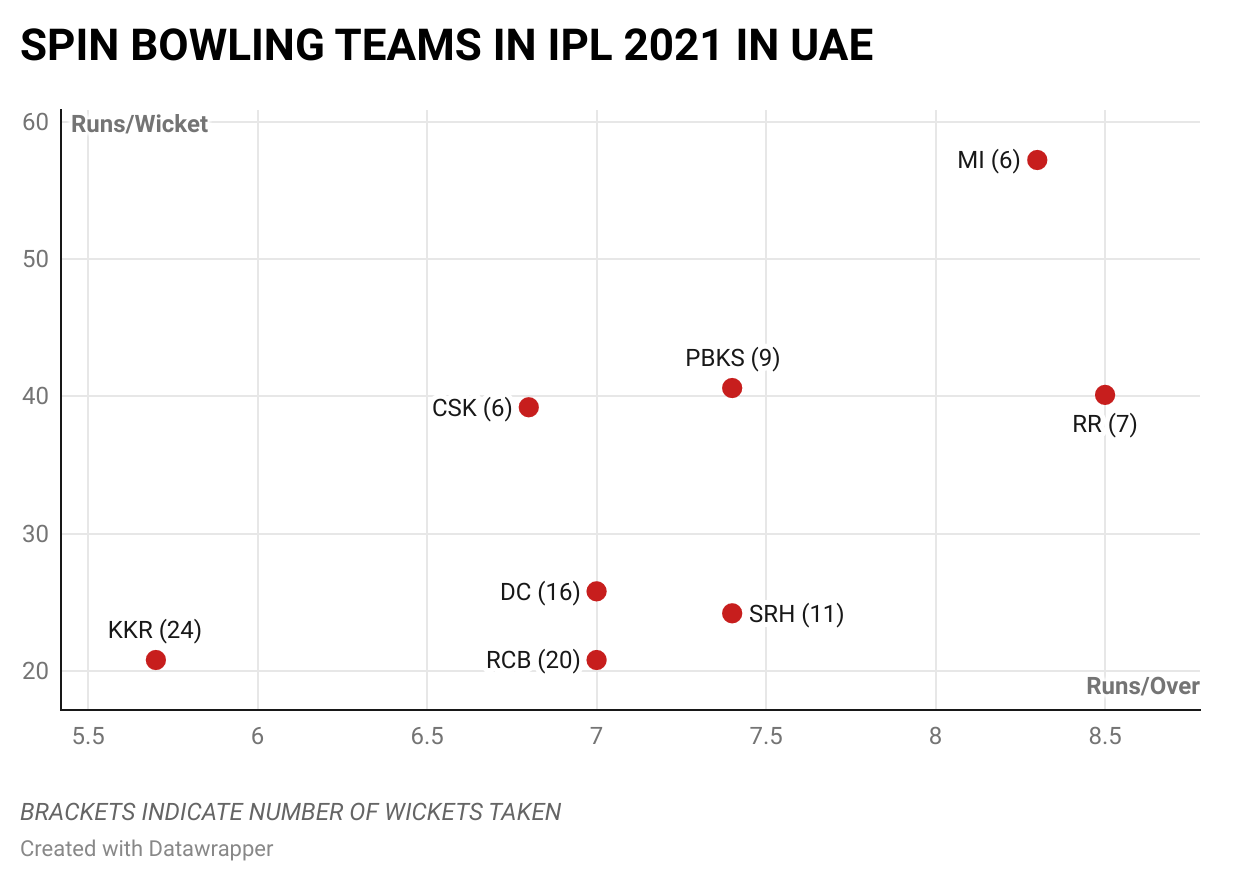 Shakib operates majorly below 90 kmph (76% deliveries below the mentioned mark), Chakravarthy and Narine’s most frequent speed is between 90 and 100 kmph - 72% and 76% respectively. Their stump-to-stump line makes it harder to attack them.

The Chennai batters have found it tough to break free against this modus operandi. Since 2020, their strike-rate facing Kolkata’s spin is 123.2 while the average lingers at 24.4. Both the numbers are second worst for Chennai facing spin against any IPL opponent. Kolkata last defeated Chennai in 2020 when Chakravarthy and Narine choked Chennai in the second half of the innings. They almost repeated it in Match 38 this year.

It is a prime reason why the nature of the pitch and the toss result is paramount in this final.

Robin Uthappa’s 63 in Qualifier 1 has sealed the only vacant spot in the line-up.

There is no confirmation around Andre Russell’s fitness. In case he is fit, and fit enough to bowl, there is little doubt he will come in. The question is who makes way for the big Jamaican? Performance wise, it should be Eoin Morgan but he is the skipper. Shakib has delivered with the ball but Russell’s pace might be more helpful to counter the conditions’ factor in Dubai.