Most valuable all-rounders in IPL 2020 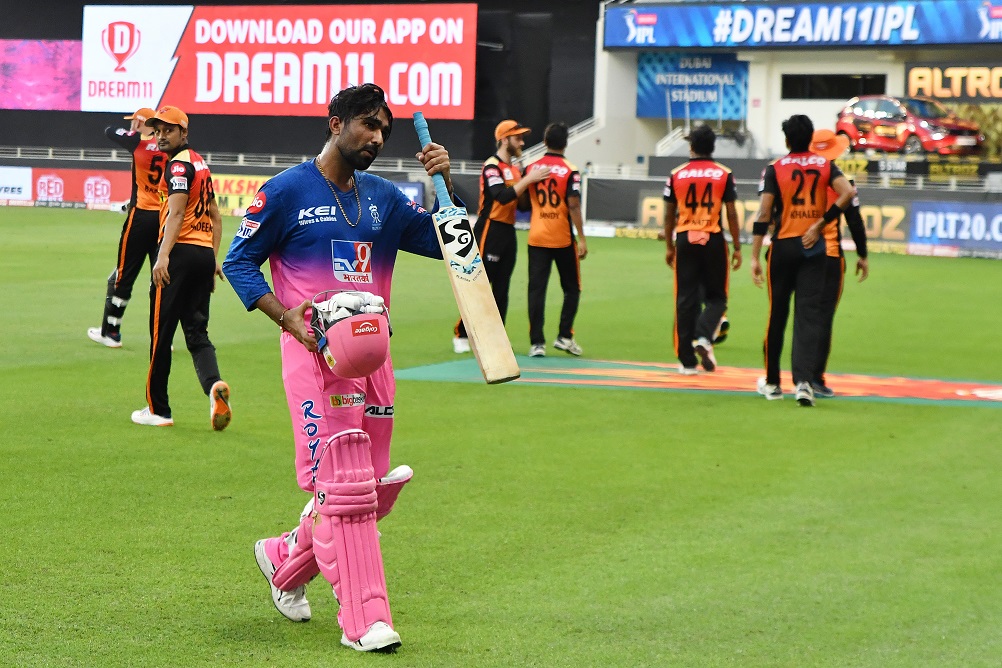 Most valuable all-rounders in IPL 2020

There were a bunch of players who stood up in both facets of the game in IPL 2020. Let us look at who among them were the most impactful. Our analysis will entail the criclytics MVP points that these players gathered throughout IPL 2020.

Also, not all all-rounders are similar. Every all-rounder that the game has seen inclines to a particular facet of the game. Even among the greats, Jacques Kallis loved to bat while Andrew Flintoff was more potent a fast-bowler.

Hence, to ensure an apple to apple comparison, we have divided the players as batting all-rounders and bowling all-rounders.  Let us look at the first category.

For a player to qualify as a batting all-rounder, the criteria we have put in place is a minimum of 200 runs with the bat and 15 overs with the ball. Moreover, the MVP batting points they should have accumulated through the course of the season should be more or comparable to MVP bowling points.

With this in mind, here are cricket.com’s top batting all-rounders in IPL 2020- 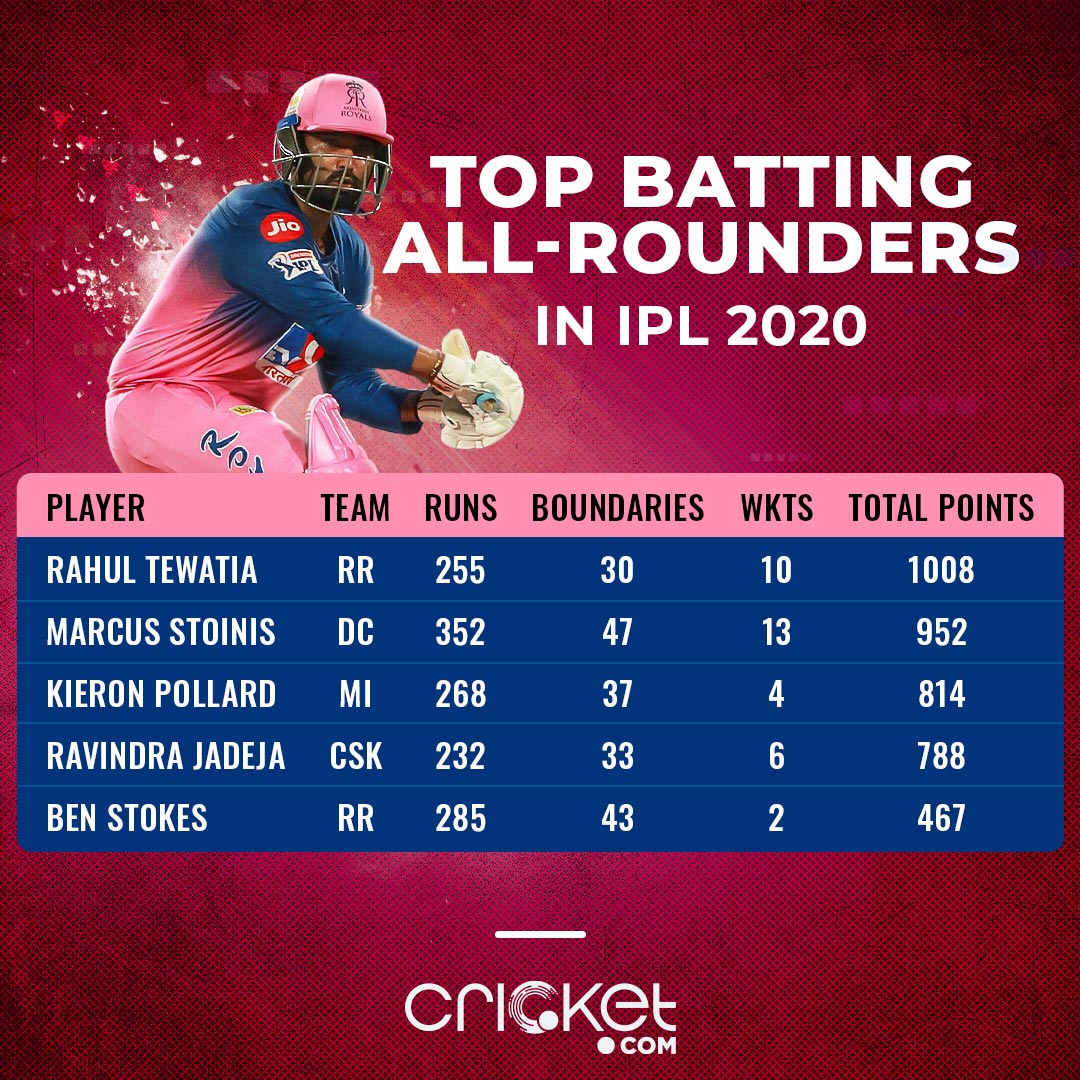 Up until the point when Rahul Tewatia hit Sheldon Cottrell for five sixes in an over, it was tough to believe that he will end up being one of the most valuable players this season. As it turned out, he was Rajasthan Royals’ best player in a match in as many as five games, twice earning a perfect 10 on the criclytics report card.

He followed that memorable knock against KXIP with another match-winning cameo against SRH. With the ball, in seven of the 14 games, he finished with a spell that had an economy of under seven. With 1008 MVP points, he is not just the best batting all-rounder in IPL 2020 but also the third most valuable player overall.

Failing to make an impact on dry pitches in India, Marcus Stoinis has been a traveller in IPL. With Delhi Capitals, he emerged as an unlikely hero with bat and ball. He started with a bang in Capitals’ first game but his performance tapered a bit around the halfway mark. However, he bounced back in the second half and scored 352 runs in IPL 2020 at a strike-rate of 148.5, the highest for the Capitals. In addition to this, he possessed a golden arm that produced wickets whenever given the ball. He ended up being DC’s best player on the night on five occasions.

No other player had a strike-rate better than Kieron Pollard’s 191.4 in IPL 2020. In an outfit like Mumbai Indians, Pollard gets infrequent opportunities to bat. But whenever he went out, he made an unsurmountable difference on most occasions. In a side that lacks a sixth bowling option, Pollard chipped in whenever dew limited the impact of their spinners. He was MI’s best player in three matches.

Though Ravindra Jadeja did not make as much impact with the ball as he usually does, he made it up with his returns with the bat. In IPL 2020, he averaged 46.4 and had a strike-rate of 171.8, both his best in a season by a big margin. He was CSK’s best player on two occasions.

To wrap up the best five is Ben Stokes. Though it took him a while to get into the groove, but once he did, it resulted in probably the best innings in IPL 2020 – a splendid 107* against MI. He followed it up with a match-winning half-century against KXIP. In that must-win game, he also delivered with a helpful spell of 2/32.

This is a more common breed than the previous one.  The criteria followed for a player to be considered a bowling all-rounder is a minimum 100 runs with the bat and 30 overs with the ball. 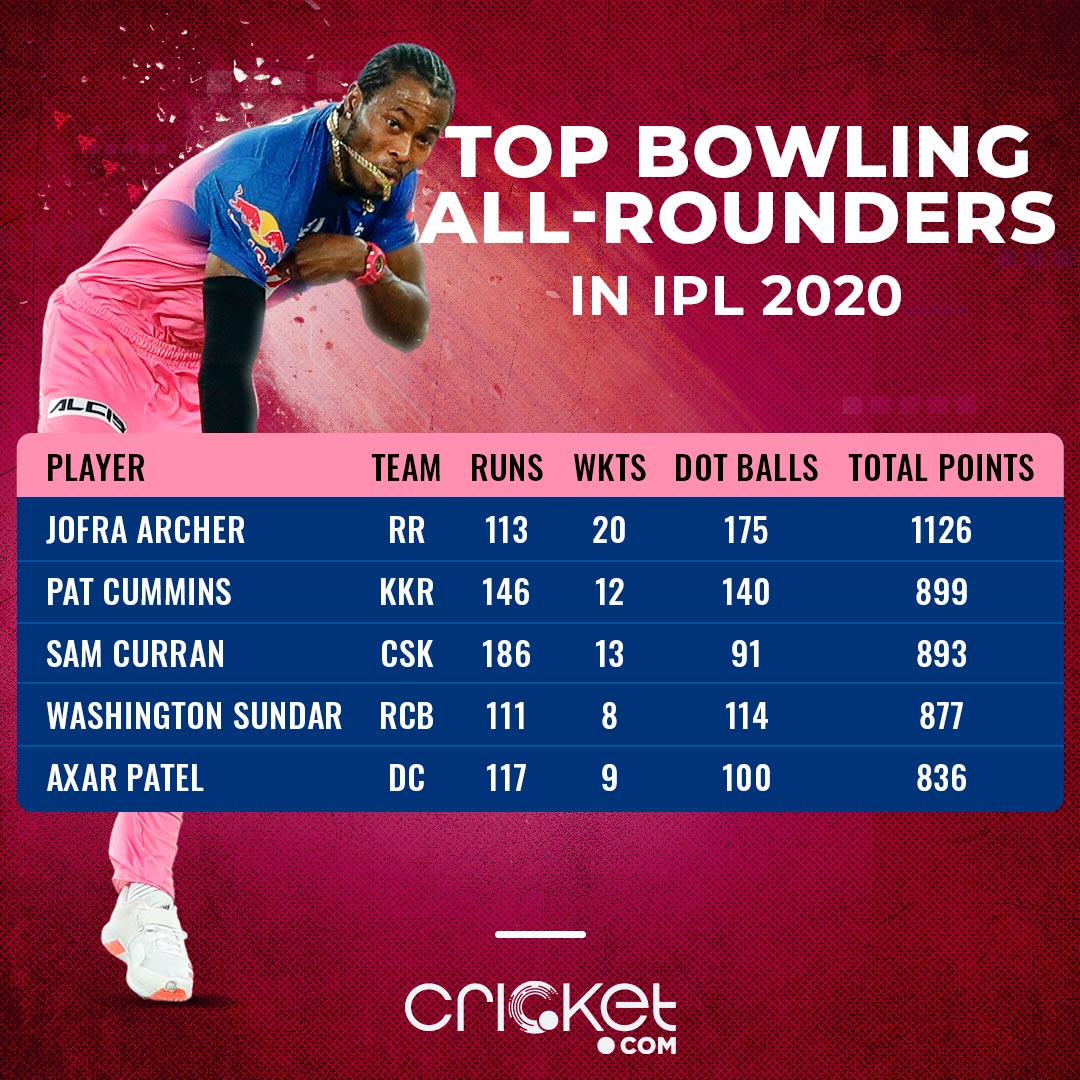 Jofra Archer is the MVP of IPL 2020, let alone being the best bowling all-rounder. In the Powerplay, Archer bowled at an unparalleled economy of 4.3. Overall, he took 20 wickets at an economy of 6.6 and a record of 16.7 balls per wicket.

Archer achieved extra MVP points due to his 113 runs that came in just 63 balls. Archer ended up being RR’s MVP on the night as many as five times, twice earning a perfect 10.

After starting the tournament with a couple of expensive spells, Pat Cummins found his mojo while bowling with the new ball. He bowled 67.3% of his overs in the Powerplay at an economy of 6.6. Cummins was the second-highest wicket-taker for KKR with 12 wickets.

With the bat, Cummins was KKR’s sixth-highest run-getter with 146 runs that came at a strike-rate of 128.1. He ended up scoring more runs than their pre-tournament MVPs – Andre Russell and Sunil Narine.

Making a name for himself among the veterans, the most delightful aspect of Sam Curran’s performance this season was his flexibility.

Curran swung the ball upfront and executed his yorkers at the death. He batted at the top of the order when needed and was always lethal in the last few overs. He was CSK’s highest wicket-taker with 13 dismissals against his name. Moreover, he scored a crucial 186 runs in the tournament while batting at different positions.

He ended up being CSK’s MVP on the night as many as five times. Also, he is among the only three players to earn a perfect 10 on the report-card three times. Marcus Stoinis and Jasprit Bumrah are the other two.

Despite the presence of other big names, Washington Sundar finished as RCB’s MVP in IPL 2020 as per criclytics. Among bowlers with a minimum of five overs this season, only Rashid had a better economy than Sundar’s 6 runs per over. 42% of these overs were in the Powerplay.  He ended up being RCB’s best player in three matches.

Apart from his economical spell and eight wickets, Sundar’s batting helped him earn extra MVP points. With 111 runs, he was RCB’s sixth-highest run-getter this year.

An honourable mention goes out to Jason Holder. Since he played only seven games, he was not able to accumulate enough runs to get into the list. He has 422 MVP points in IPL 2020. If he had played more games at the same rate, he would have found himself in the top-3 of bowling all-rounders in IPL 2020.