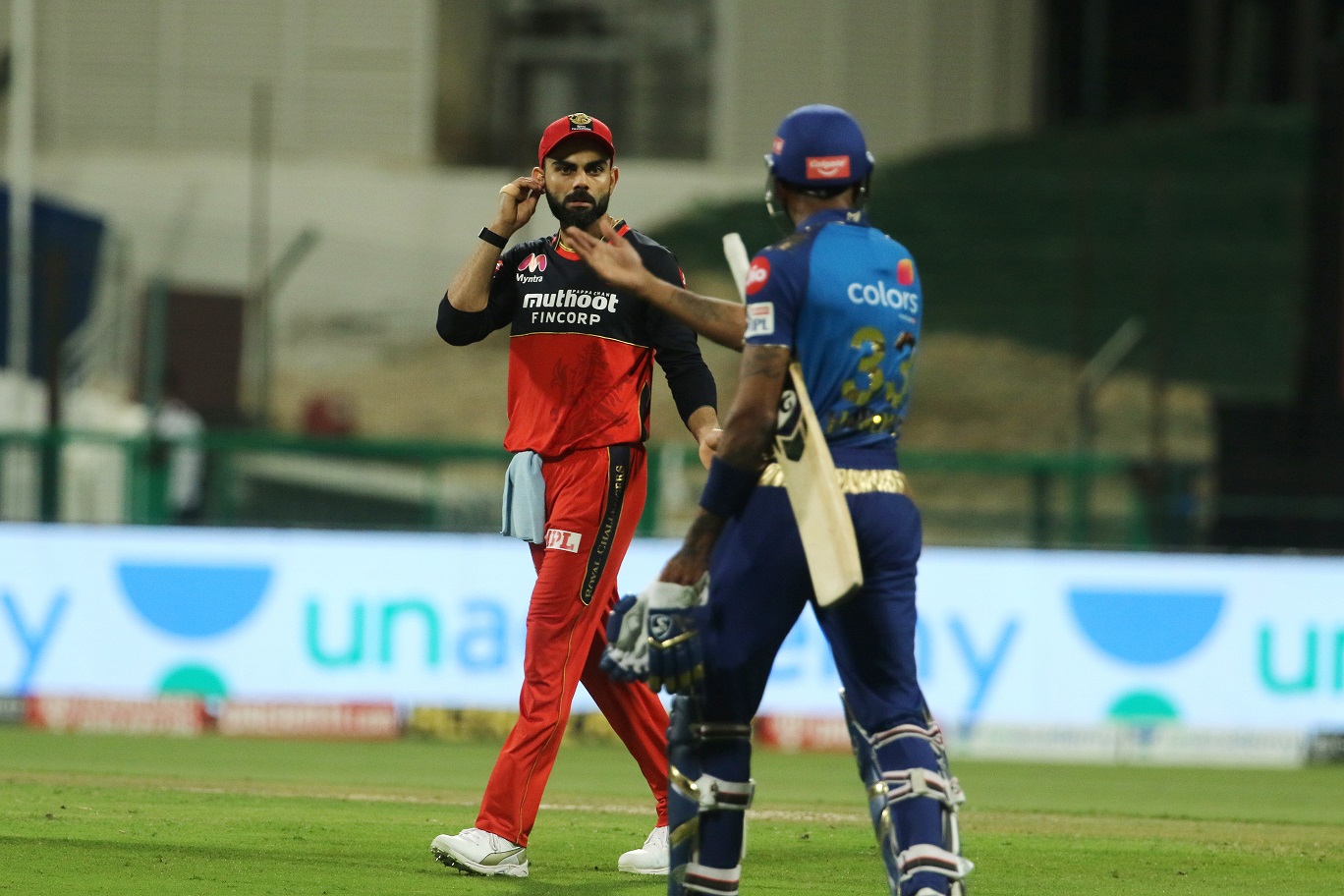 Each team has played 12 games each and we are still waiting for an official 'Q' to be added to anyone of them. That is how close IPL has been this year. 2015 and 2016 were the only years before this when no team confirmed a playoff spot after 48 games.

Apart from Chennai Super Kings, all other teams are still in contention to qualify for the playoffs. The upcoming four fixtures will clear some muddle as three of them are virtual knockouts for atleast one team. 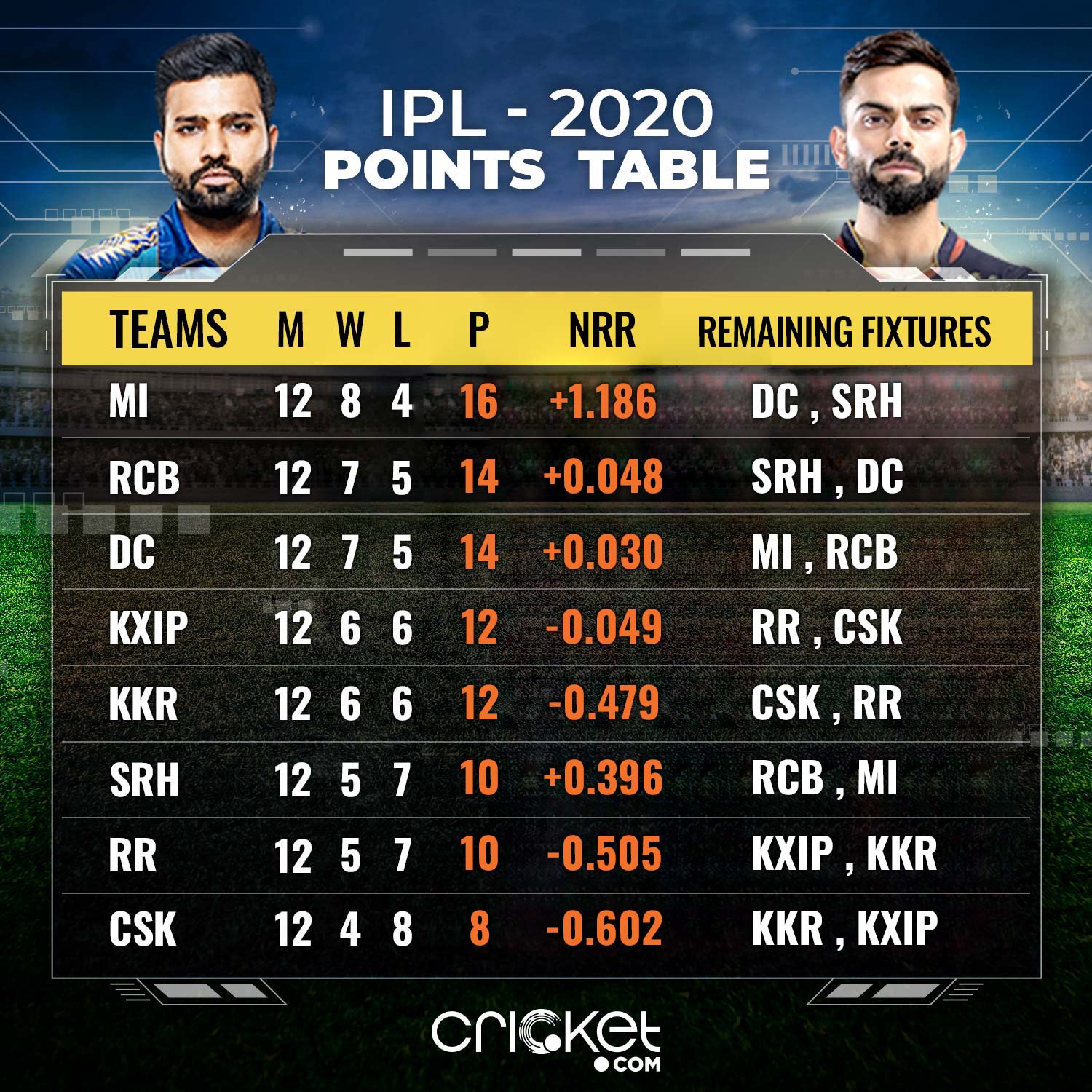 After a win against RCB on October 28, MI are all but through to the playoffs. Even if they lose their remaining two games, MI will make it to the playoffs. While on paper, four other teams can also end up at 16 points, the NRR gap between MI and the other sides will be difficult to breach.

If they win one of the remaining two, they will also affirm their position at the top of the table this year. Moreover, as DC or RCB play each other, only one of them are capable of reaching 18 points. Hence, MI are all but certain to finish in the top-2, unless they suffer two catastrophic defeats.

A string of losses for both sides has put their playoff spots in a jeopardy. Let alone their hope of finishing in the top-2. For a guaranteed top-2 finish, they should win both their remaining fixtures. To ascertain a qualification to the playoffs, they should win atleast one of them.

The biggest catch for RCB and DC is that they are yet to play each other. Hence only one of them can be at 18 points. However, this also ensures that atleast one of them will be at 16 points. Looking at their positive NRR, it is almost certain that 16 points will be enough for either of them to qualify.

Since they play each other in their last game of the league stage, the fixture between them can be a shootout for a top-2 spot if they enter that game with a win. However, if they enter by losing their individual fixture (DC vs MI and RCB vs SRH) than it will be a virtual quarter-final for the playoffs.

If one of RCB or DCB lose both their games then they will have to depend on the results of other games and NRR to win a playoff spot.

Looking at the remaining fixtures, atleast one of KXIP, KKR and RR will be at 14 points or more. KXIP and KKR can reach 16 as well and that will knock the sides at 14 out. Also, SRH can be at 14 by winning all games from here. Moreover, SRH have the best NRR after MI. Hence, if a side is to qualify at 14, SRH have the best chance.

KXIP have stormed back into the tournament with five consecutive victories.

However, to be safe for playoffs, they need to win all the remaining games. Even then, KKR can finish with 16 points as well. However, since KXIP have a better NRR than KKR, it is unlikely to be an issue.

Moreover, if KXIP can achieve big victories, they can knock on the door for a top-2 spot as well.

But, if KXIP win one, things will be tricky for them. They will be fighting with SRH, KKR, RR and also one of RCB or DC for the last two spots. RCB and DC have a better NRR than them hence, they have a better chance to take one of the remaining spot.

Whenever IPL has been an eight-team event, never has a team with 16 points failed to qualify. However, with their NNR being third from the bottom, KKR can be the first team to not qualify at 16.

Even if they manage to win both their remaining games, there are 4 teams above them that can finish with 16 points. KKR’s only hope as of now is for either of RCB or DC to lose all their games or KXIP to lose one of their remaining two.

If KKR loses one of their remaining games, it is almost impossible for them to qualify. Since KKR and KXIP face RR, even if KKR finishes at 14 points, any one or both of KXIP and RR can finish with 14 points as well.

Also, SRH can too compete with 14 by winning all their remaining games. With all these sides except RR having a better NRR than them, KKR will be all but out if they lose one game from here.

After a heart-breaking loss against KXIP, SRH came back strong against DC. However, each game is a do or die encounter for them.

Even If SRH win all the two, they will finish with 14 points. Apart from the top-3, who are 14 or more already, either of KKR, KXIP and RR will end up with 14 or more points for sure. Hence, the only way they can qualify at 14 is for KXIP and KKR to lose one game each.

However, if teams with 14 points fight for the remaining spot, SRH are at an advantage as they have the best NRR among the bottom seven teams. It will only improve if they win all games from here.

The Royals pulled off an empathic victory against MI on the night of October 25. But, it goes without saying that RR need to win all of their remaining two games to be alive in the tournament. Even then, they are at the mercy of CSK to beat KKR and KXIP.

For them to qualify at 14, KKR and KXIP should lose both their remaining games. One of these games is in their control since they play both those sides. Post that, their only hope is for CSK to spoil the party for KKR and KXIP.

Also, they will need SRH to lose one of their remaining two games. With a NRR better than only CSK, it is improbable that RR can make it to the playoffs while competing with a side at 14. They will need four teams to be at 12 points or lower. 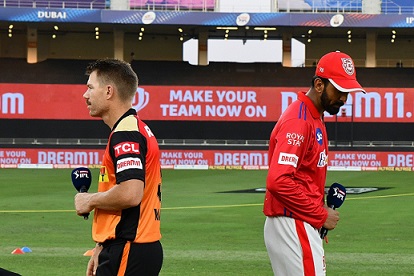