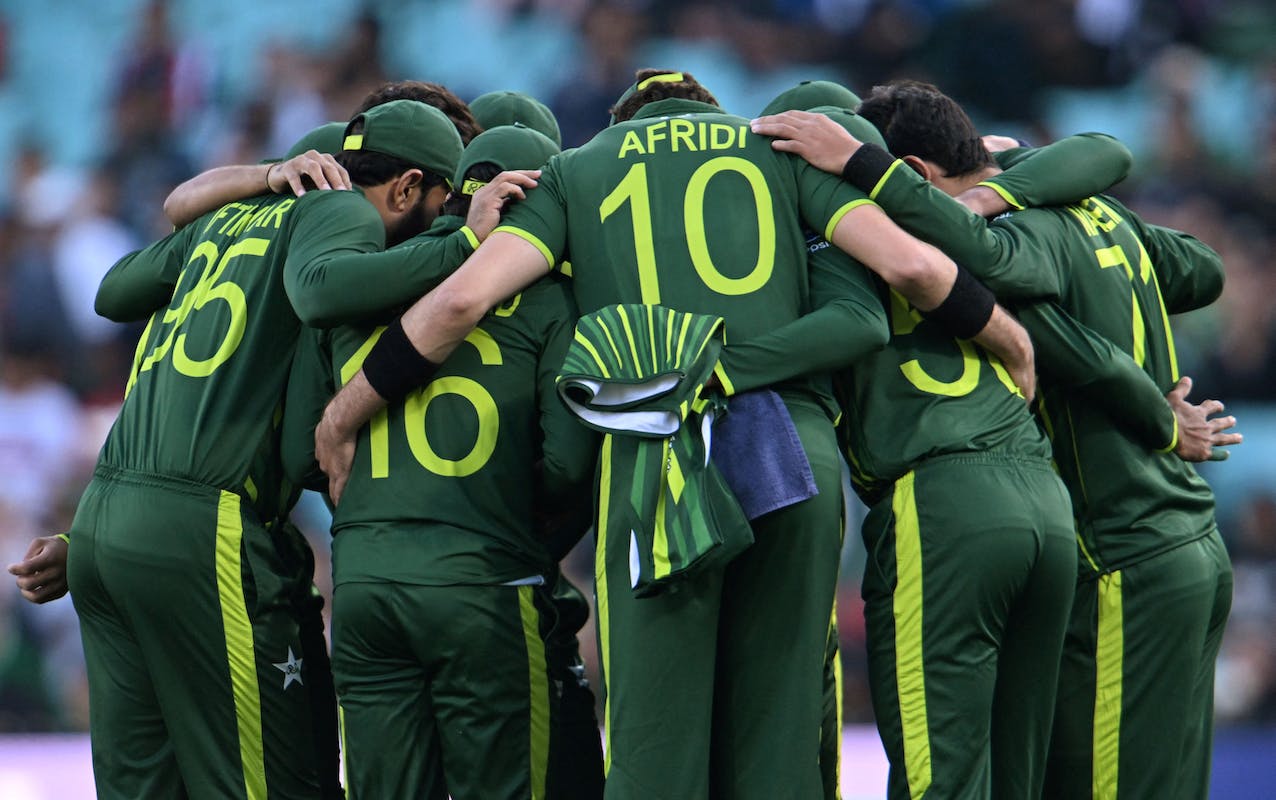 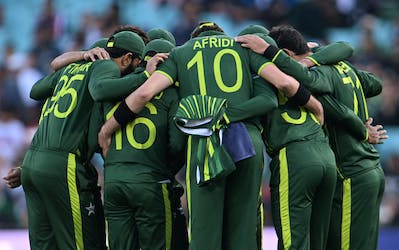 Random things have happened in this World Cup and the Pakistan team is the king of such randomness on the cricket field. They will turn up with an atrocious performance when they are expected to win. But you corner them aside and no matter how well you play that day, they will eat you out like gobbling up Iftaar during the month of Ramzan.

They were in a similar situation in this World Cup. They hadn’t gotten off the mark after their first two matches. After a close and disheartening loss against India in their campaign opener, it was expected of Pakistan to pick up in their subsequent match against Zimbabwe. However, maintaining their character, they slipped further.

What is the right time to peak in a tournament often makes a good debate in such mega-events. At 43/4 in a virtual knockout game against South Africa, it felt like Pakistan won’t get a chance to peak at all in the competition. That was the moment when they were conveniently cornered aside. From touching the rock bottom with their fingertips is when the Men in Green decided to peak.

They turned a corner around, beating South Africa by a hefty margin from a position of no return. The most random upset of the T20 World Cup surfaced, with the Dutch trouncing the Proteas, opening Pakistan’s door to the top four. And now, after a tumultuous journey, they have defeated one of the most efficient sides of the tournament in the most clinical manner possible.

They just ticked all boxes of a perfect T20 game.

You can presume that everything is alright with Pakistan cricket if they are fielding well. There are not many days like that. In Sydney on Wednesday (November 9), they exhibited their best fielding form.

“They are on fire today, Pakistan,” exclaimed Ian Smith on air when Haris Rauf saved 3 runs with a superb dive at short fine-leg in the fifth over. Mel Jones responded, “You have to own the inner circle”. Pakistan were on their money in 'owning' the field today. 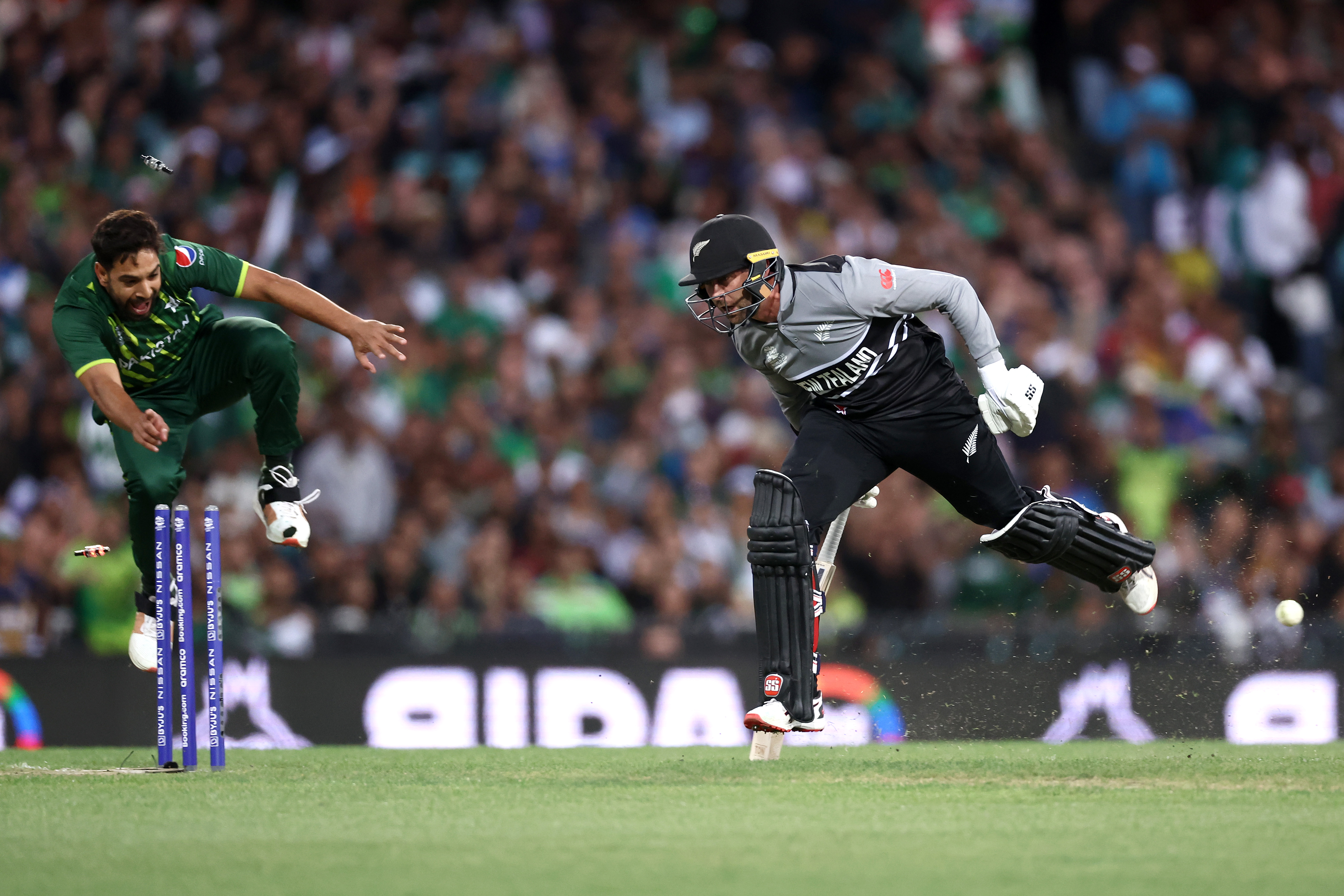 The best example was showcased by their best fielder. Shadab Khan turned the heat on New Zealand with probably the most well-timed run out of this tournament.

A great batter against spin, the conditions were tailor-made for Devon Conway. His presence in the middle would have complicated Babar Azam’s job of deploying his spinners. Shadab sent Conway back with an accurate throw on the last ball of the powerplay, right before spin was supposed to be introduced.

The aftereffect of Conway’s run out was clearly visible when Mohammad Nawaz dismissed Glenn Phillips in the eighth over. Things could have been a lot different if Conway had made it to the middle-overs. Shadab cut his stay short right at the brink of it.

New Zealand tried to recover but by the time the innings reached the death overs phase, Pakistan only had to deliver a regular closing out performance to tighten the screw further on the Kiwis. Even though New Zealand had set batters, Pakistan conceded only 46 runs in the final five overs, catching the Blackcaps short of the par score.

Chasing 153, there was only one doubt. Pakistan have been terrible in run chases in this world Cup. Batting first, their top seven had averaged 22 .6 at a run-rate of 8 before Wednesday, in comparison to 19.9 at a run-rate of 6.4 in the second innings. It was a consequence of a sluggish World Cup for Babar and Mohammad Rizwan. Babar had scored 39 runs in five innings at a strike-rate of 61.9. Rizwan averaged 20.6 at a strike-rate of 100.

These stats were New Zealand’s only hope in what seemed like another bread-and-butter run chase for Pakistan in home-like conditions. And the last unchecked box clicked. 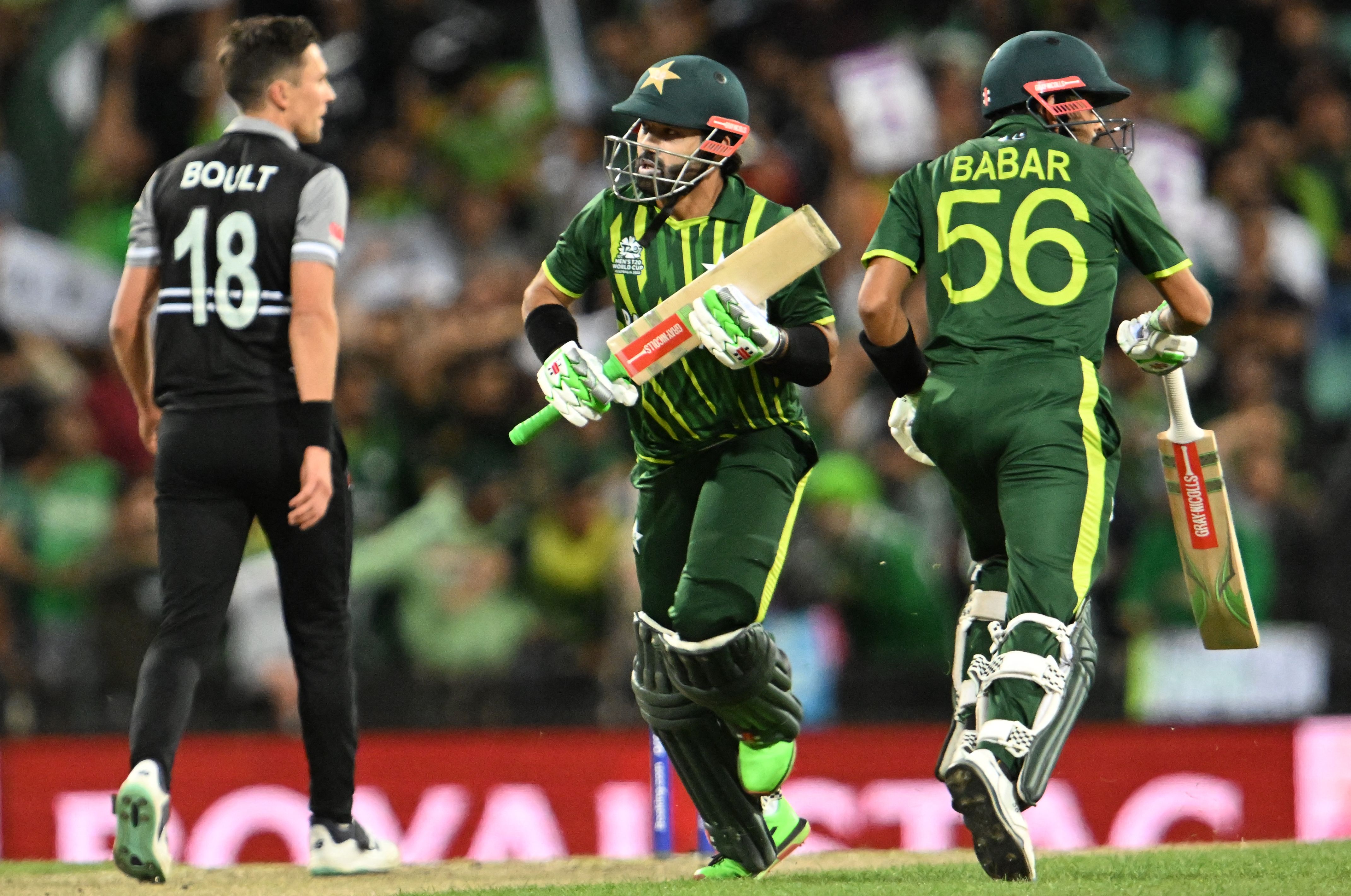 Like their fielding, Babar and Rizwan also not only just clicked but owned the powerplay.

"When we crossed the boundary line, me and Babar decided that we could attack the new ball, because we knew that the pitch was tricky,” said Rizwan after the match. Pakistan were 55/0 in six overs, absorbing all the early nerves of what could have been a tricky chase had the openers not fired.

From a position where none of the two openers could go beyond run-a-ball in the tournament, Babar and Rizwan forged a 105-run stand for the opening wicket in 12.4 overs. The run-rate of 8.3 was greater than the asking rate of 7.7 at the start of the chase. There were no sixes in the partnership but only masterful gap finding to keep the scoreboard ticking.

“As we know about the weather, when there’s a lull there is also a storm that follows,” said Pakistan’s batting coach Matthew Hayden before this game in the context of Babar’s poor form. The Pakistan skipper vindicated Hayden’s words with 53 off 42 balls.

Heading to Melbourne now for the final, Pakistan have ticked all boxes to put any opposition in distress. The bowling has been top-notch. The openers have hit their form. The middle-order has already helped them rise from the ashes a couple of times. Mohammad Haris’ inclusion has been a breath of fresh air. Their MVP - Shadab Khan - has contributed in every game, be it with the bat, with the ball or in the field.

THEY ARE PEAKING AT THE RIGHT TIME.

It is natural to feel they left it too late but for Pakistan, it was just in the nick of time. The showstoppers arrive late to the party. That is why Pakistan are so fun to watch, be it as a neutral or in the opposition camp. 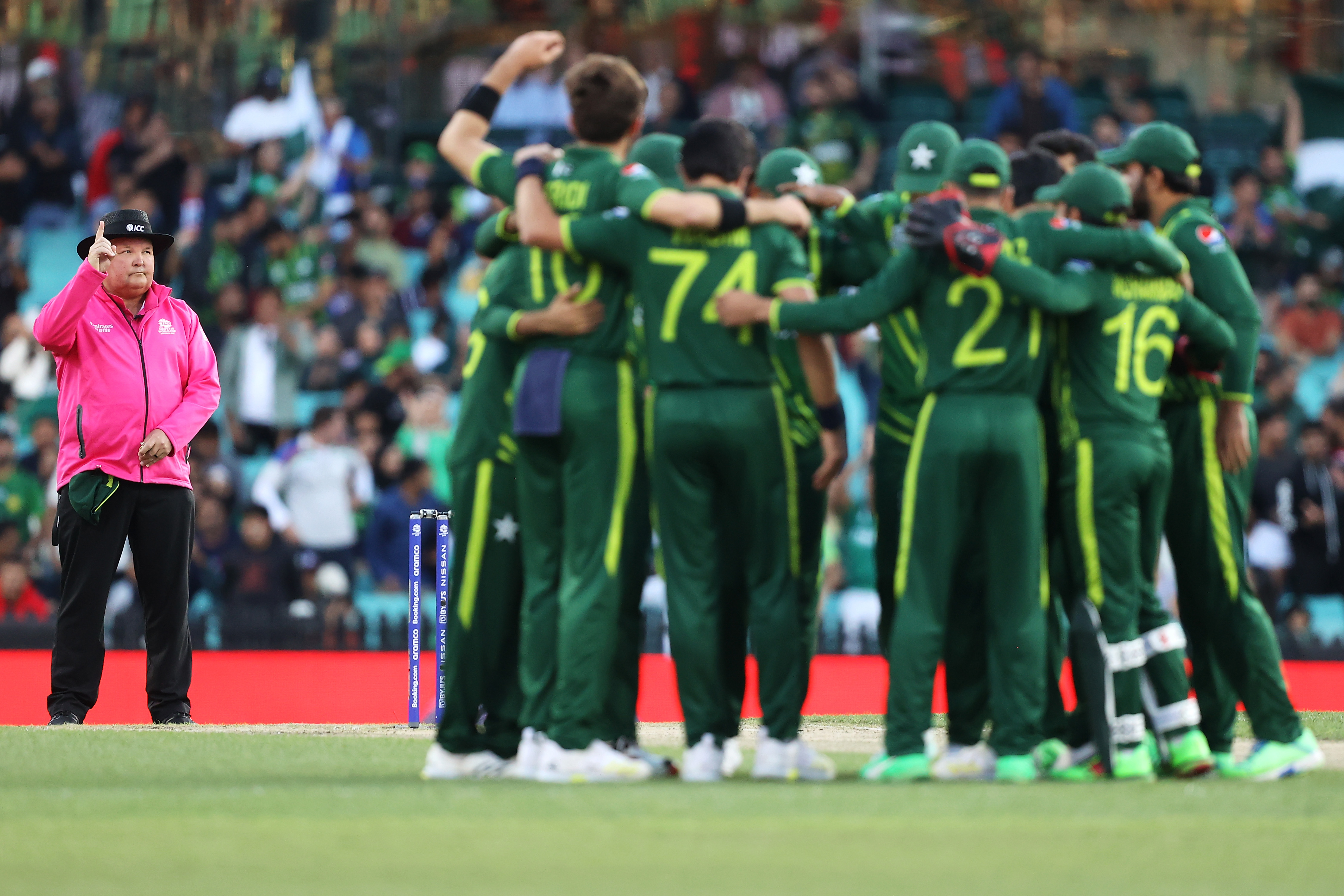 As their coach, Saqlain Mushtaq concluded a few weeks back in what has now turned into a popular meme - all this is Qudrat ka Nizam, ie, nature’s fate. The stars have aligned for Pakistan. There is no other explanation for the series of events that has taken them to the final. That too in Australia, a country where Pakistan had not won a single T20 international prior to this World cup. Well, it is just another fact that glorifies their campaign further.

A FUN FACT: This is the first time Australia is hosting a 20-over World Cup. When they hosted the 50-over World Cup for the first time (in 1992), Pakistan were on the verge of an early elimination. They won only one of their first five league games. They were bowled out for 74 against England but were saved by rain. Rain was the luck they needed in 1992. This year, it has been the Netherlands team. After a drowsy start, Pakistan peaked at the right time, beating New Zealand in the semi-final and then England at the MCG to claim the cup.

They have ousted New Zealand in a semi-final now. England are still alive in the competition. The final is at the MCG. Will the stars stay aligned for Pakistan to lift the trophy in Australia again?