Pakistan's beast mode pulls them back from the grave 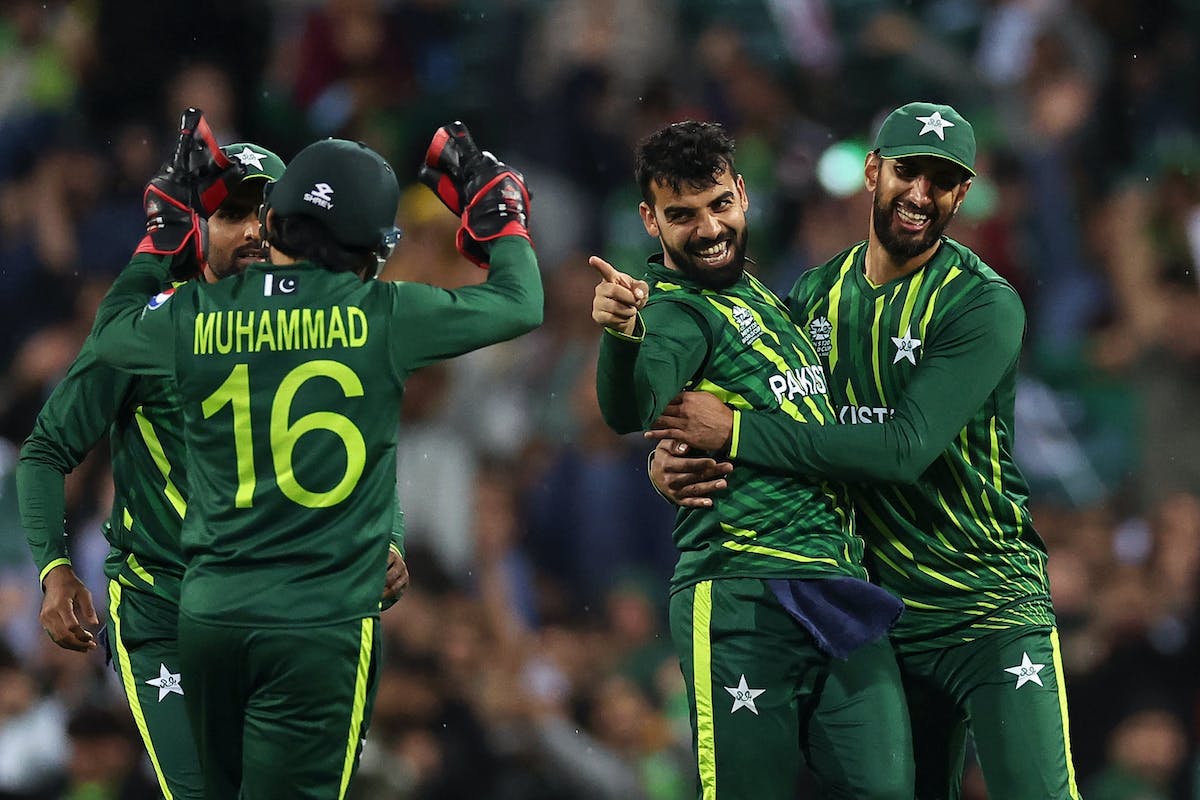 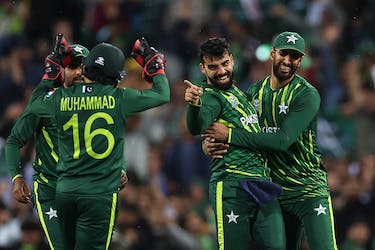 Pakistan's beast mode pulls them back from the grave

The Men in Green had no business winning from 43/4 but they not only won, they made it look too easy

Pakistan were 43/4 in seven overs while batting first. Teams generally don’t win from this position. The T20 format doesn’t give you enough time to absorb the pressure from here on. In the last 50 occasions of teams batting first losing four wickets or more within the first seven overs, the win percentage is only 20 (in games involving Test-playing nations on both sides).

There was added pressure on Pakistan. A do-or-die game. A negative match-up - a side not renowned to tackle pace neatly against one of the best pace-bowling outfits of the competition. Also, they are a top-heavy side. Since 2020, their openers have scored 45% of their total runs in T20Is. Babar Azam and Mohammad Rizwan scored 10 runs off 19 deliveries. Pakistan had no business winning this game. In Pommie Mbangwa’s words, they were dead and half-buried.

But it is times like these, when you discard Pakistan the most and they turn on the beast mode. Cornered Tigers anyone? They not only won but won quite comfortably - by 33 runs. It wasn’t the bowlers to pull the weight alone. The batting turned up from its grave, to reduce South Africa’s bowling to mere dust on a chilly evening in Sydney. 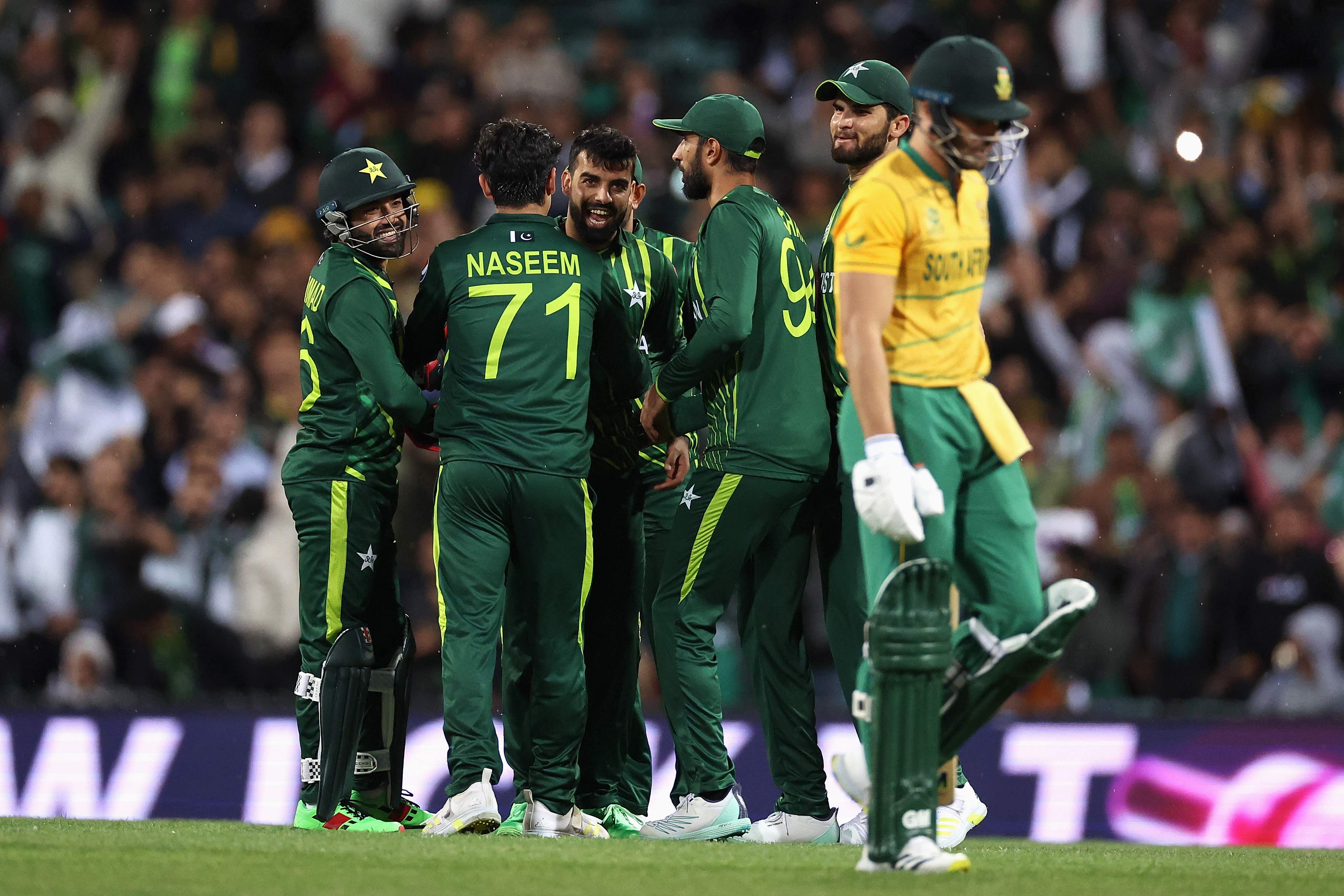 From 43/4 in seven overs, Pakistan rocketed to put 185 on the board. You seldom see them turn it around with the bat after a glimpse at the rock bottom.

The turnaround began with Iftikhar Ahmed. Considered one of the weaker links in Pakistan’s middle-order, the right-hander delivered for the second time under pressure in this World Cup. Against India, he walked out at 15/2 in the fourth over and struck a breezy 51. It was his onslaught against Axar Patel that triggered Pakistan to 159 when 140 seemed tough. If that was playing his favored bowling trait - spin - on Thursday (November 3), Iftikhar marched on by targeting the pace of Kagiso Rabada.

Rabada was smashed out of the attack after his first over with the new ball, in which Mohammad Haris struck him for 17 runs. The speedster’s second over was nicely placed by Temba Bavuma; Rabada was called him back in the eighth over, when Pakistan had their back against the wall, ultimately granting him breathing space after a poor first over. But Iftikhar took him on in his third over, smashing him for 10 runs from the first three balls. The shackles were broken. 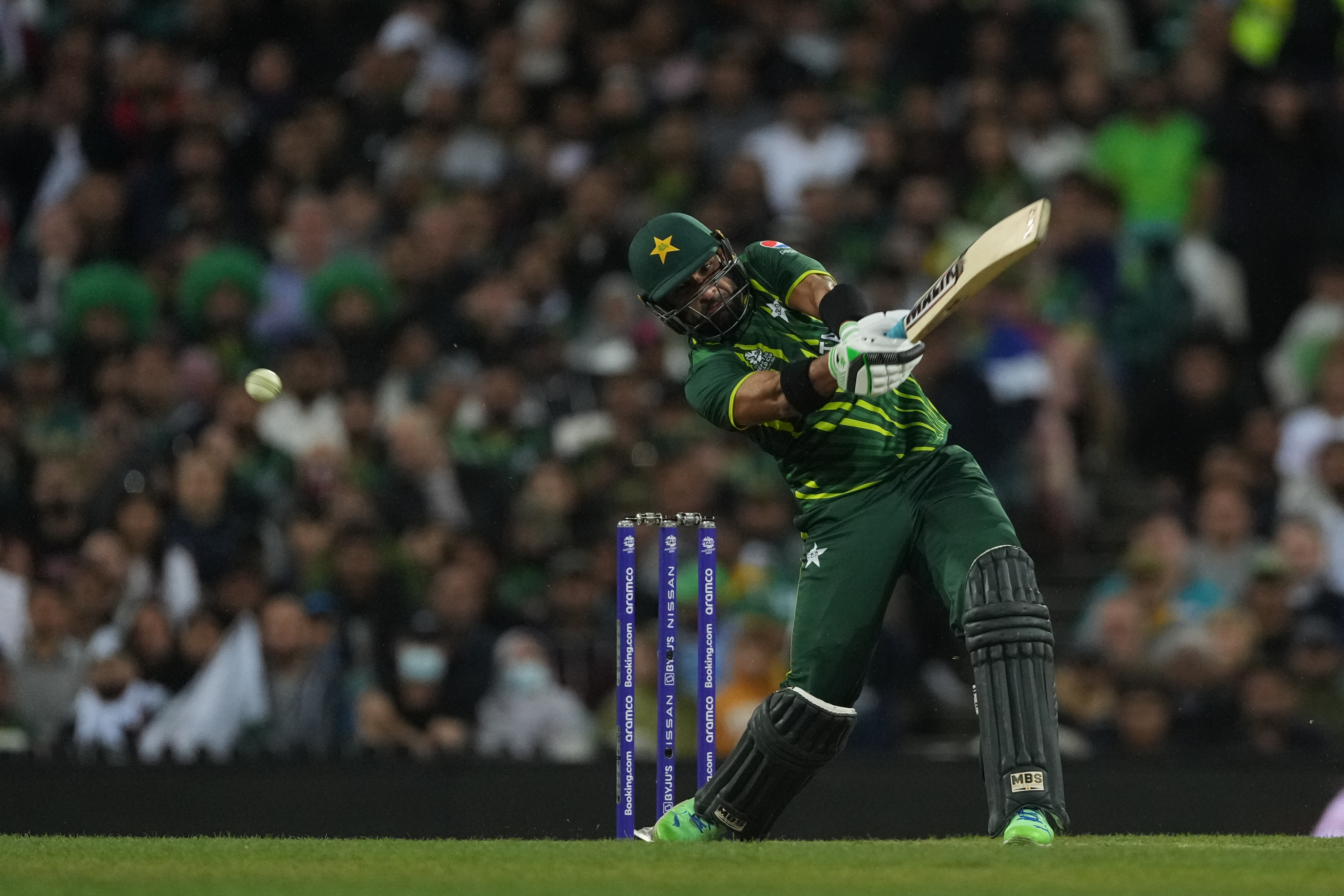 Nawaz was out in the subsequent over. Shadab Khan took the baton. If there were any doubts about Pakistan maintaining the momentum they had just attained, Shadab answered them with flying colors. He smashed a 20-ball fifty. Completely out of the syllabus for the Protea bowlers. Shadab is a rising prospect as a batter but averaged just 17.6 before this knock.

Shadab and Iftikhar batted like they have cheat codes. Within the first 18 balls of their stand, they had added 40 runs with runs all over the park. Shadab creamed a sublime six over covers. Iftikhar hammered two colossal hits. Every other ball was hit in the gaps. Fielders just didn’t matter the way these two progressed in their stand. They added 82 off only 36 balls.

Pakistan smashed 117 runs in the second half of their innings after being 68/4 in the first 10.

The game was effectively won between the partnerships described above. 185 was an above-par total given Pakistan was yet to arrive with their stronger suite - bowling. And South Africa’s batting hasn’t been the most consistent one given its long tail. No David Miller made Pakistan the favorites. 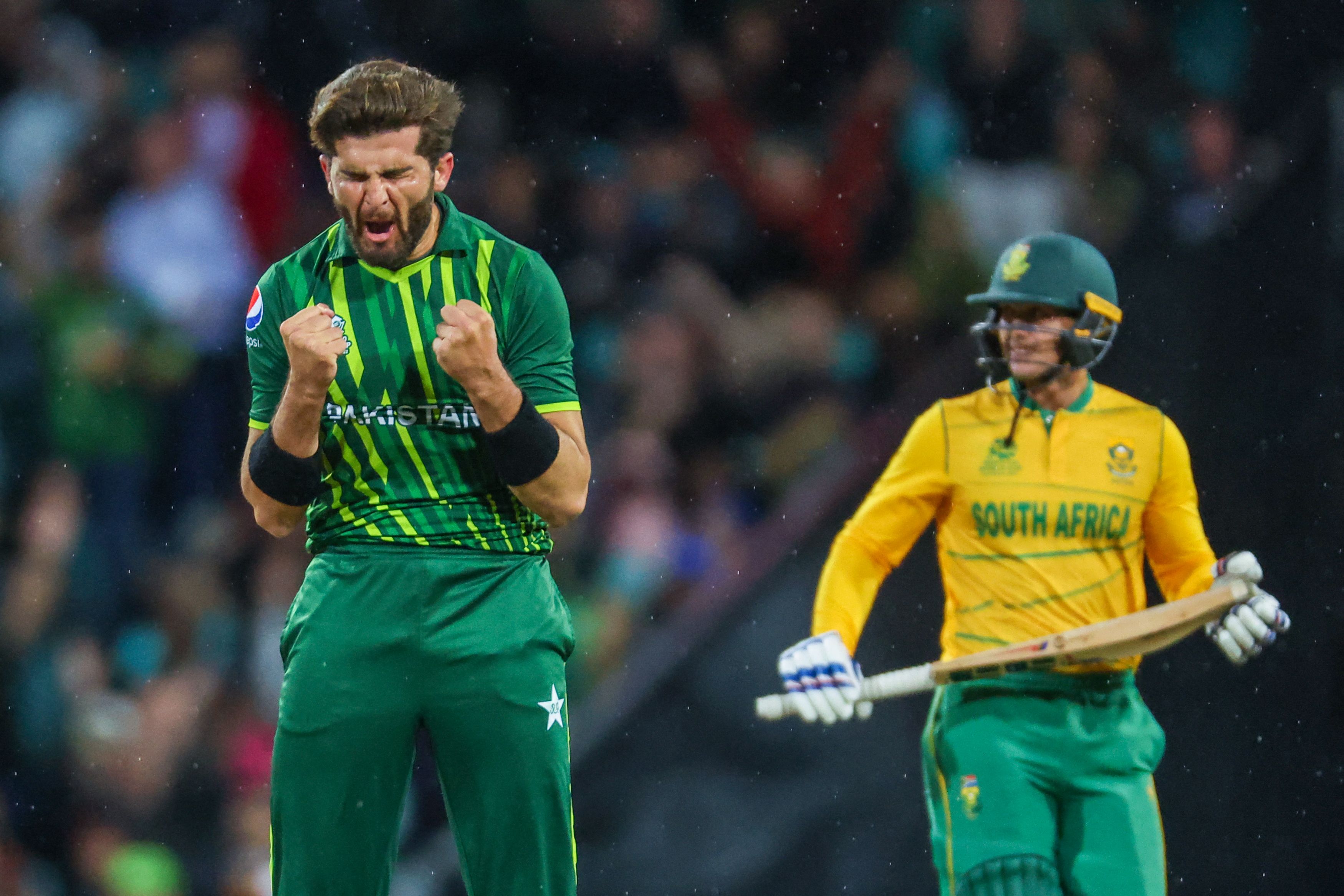 Any early blows would put them on top. And at SCG this World Cup, openers in the second innings average a mere 7.9. Guess who joined the party? Shaheen Shah Afridi had only three wickets in four T20Is this year. He doubled that tally, with 3/14, including two wickets in the powerplay.

It worked two ways for Pakistan. Early wickets, yes but it also pushed two left-handers out of the game. And in Miller’s absence, it opened the door for Shadab to bowl. In 2022, Shadab averaged 15.9 runs per wicket against RHBs as compared to 35.2 versus LHBs before this match. With no southpaw to tackle, he casually rolled over Bavuma and Aiden Markram in his first over.

And the brilliant death bowling from Mohammad Wasim and Naseem Shah was the cherry on the cake. When South Africa needed 48 off 18 balls, they conceded only 6 runs between their one over each. It was a masterclass of death bowling, leaving the Proteas hopeless by the last over began.

Pakistan unexpectedly recovered from an early collapse. They timed their acceleration perfectly. Iftikhar, Nawaz and Shadab churned out more boundaries between them (17) than the whole South Africa team combined (15). With the ball, they were flawless for the nth time in this tournament. 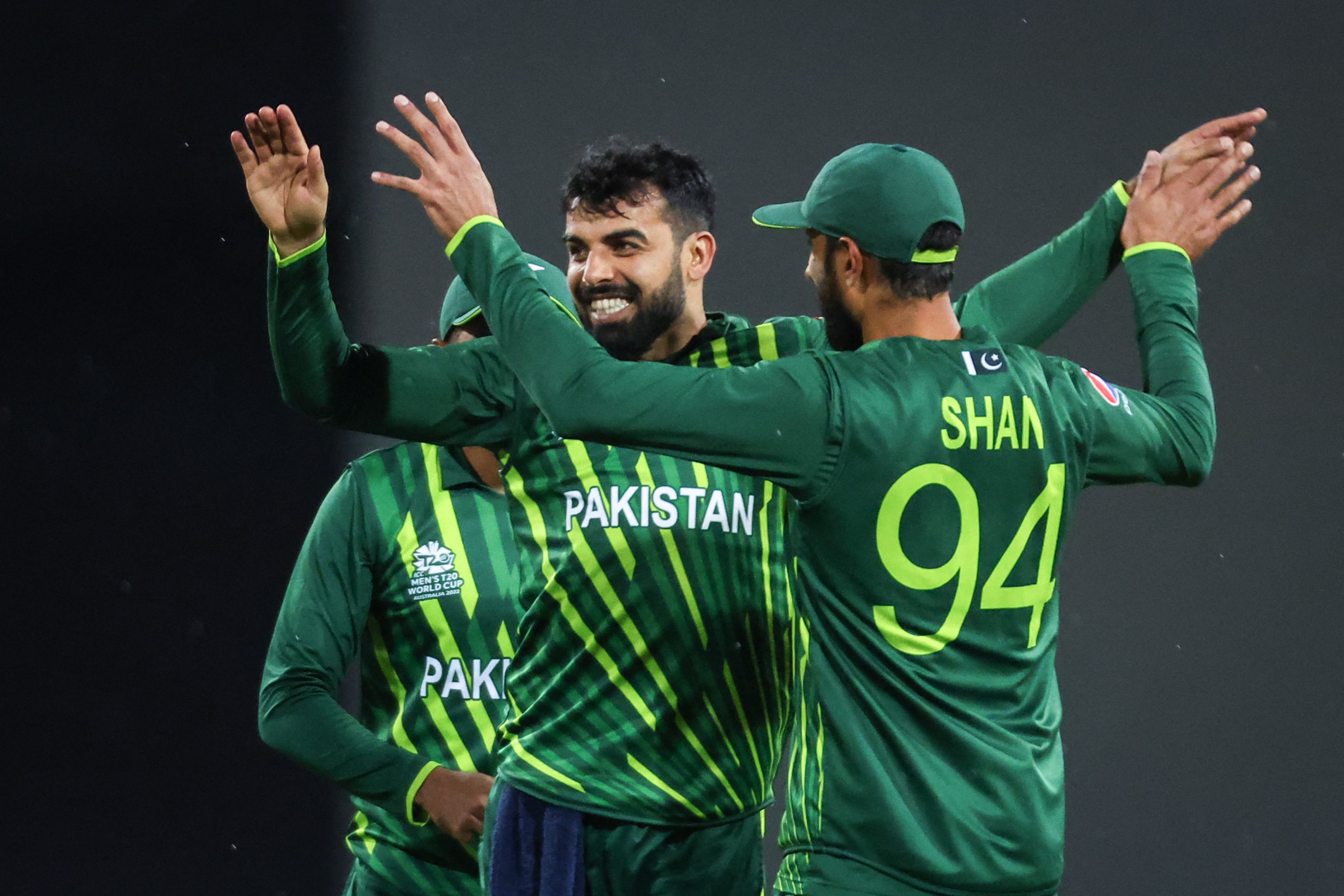 Scoring 52 (22) and picking 2/16, the only thing Shadab did wrong was putting in an awkward dive on the last ball of the match. With the game in the bag, you don’t want to test your luck with injuries trying to save an insignificant boundary.

From losing to Zimbabwe a week ago to a rousing victory over the Proteas, we have now witnessed both extremes of Pakistan cricket in this competition. And it is on days like these when they are the most fun to watch.

Trivia: There is something about Pakistan facing South Africa in these games. The last time they lost a World Cup fixture to them was in 1999. They have dented the Proteas with a 100% win record in the 21st century, be it in the ODI World Cup or the T20 edition. The fact stays intact until their next clash in these mega-events.