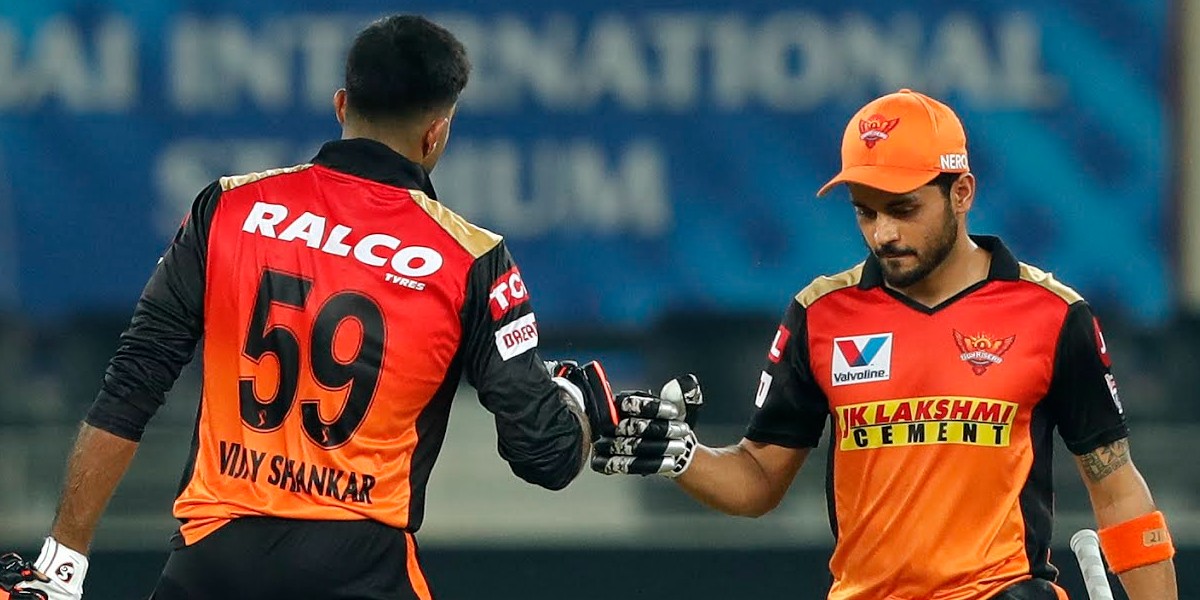 There was no Kane Williamson, and David Warner and Jonny Bairstow hardly contributed, but that's when Manish Pandey and Vijay Shankar brought their A-game and led Sunrisers Hyderabad to a convincing eight-wicket win over Rajasthan Royals in Match No. 40 of the Indian Premier League 2020 in Dubai on Thursday (October 22). With eight points to their name, SRH moved to fifth place in the points table. Meanwhile, RR dropped to No. 8.

Asked to bat, Rajasthan struggled to get going from the start and could only post a below-par total of 154/6 in their 20 overs. Playing his first game of the season, Jason Holder picked wickets at important junctures and finished with figures of 3/33. In reply, Hyderabad lost Warner and Bairstow inside three overs but Pandey and Shankar put on an unbeaten stand of 140 to help their team chase down the total in 18.1 overs. Pandey smoked eight sixes and four fours in his 47-ball 83*, while Shankar crafted a steady knock of 52* off 51. 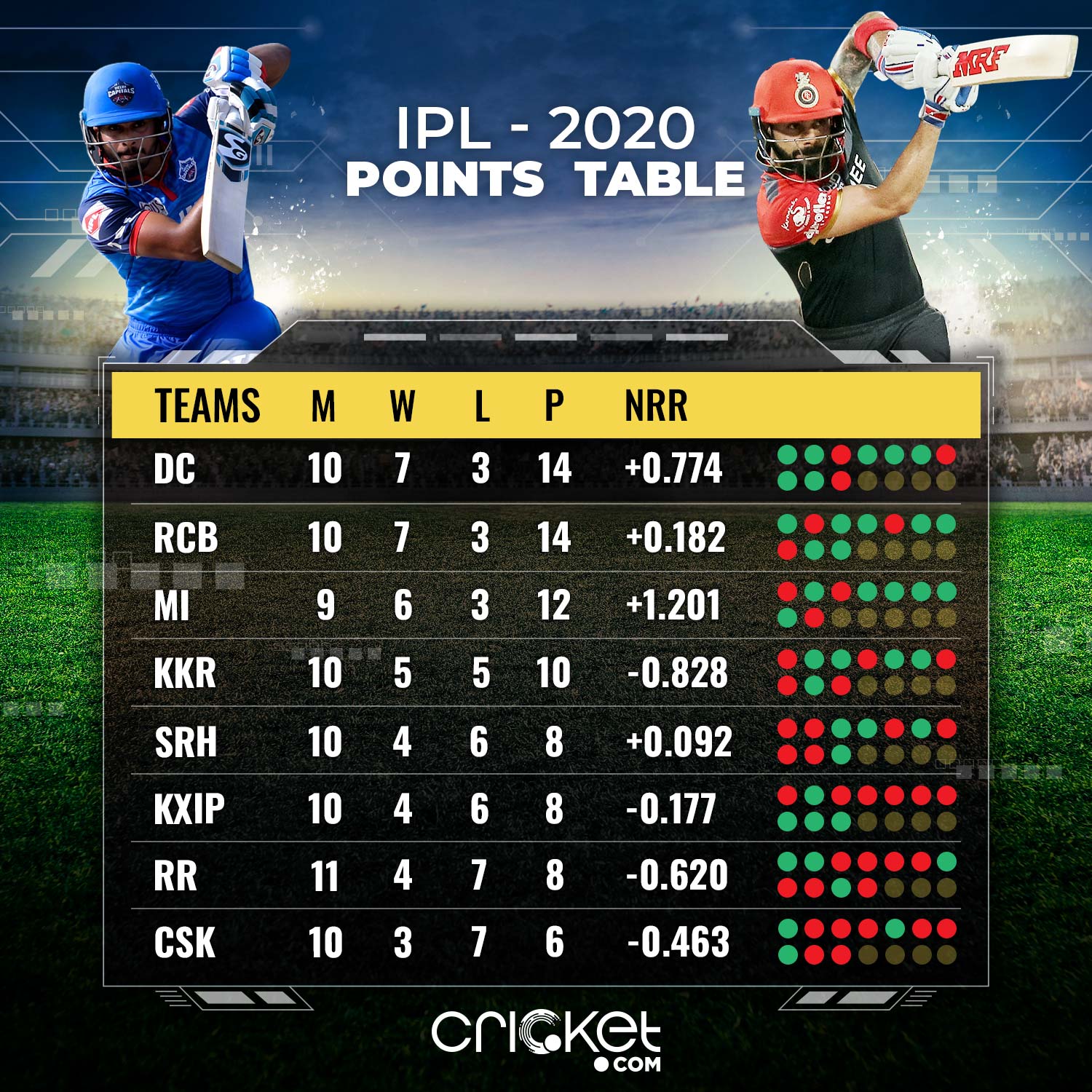 Sandeep Sharma and Holder got ample movement in the first few overs and didn't allow Ben Stokes to get off to a rapid start. Robin Uthappa however looked in solid touch from the word go and made up for Stokes. The right-hander used his feet to perfection and crafted a couple of eye-pleasing shots against Sandeep. Uthappa whipped Sandeep for a six over deep backward square before walking down the track and smashing him down the ground for a boundary.

Playing in place of injured Williamson, Holder conceded three fours in his first two overs, but the all-rounder from West Indies gave Hyderabad the first breakthrough by running Uthappa (13-ball 19) out in the fourth over. Coming in at No. 3, Sanju Samson announced his arrival with back-to-back boundaries and didn't take much time to get going. Having scored just 78 runs in his last eight innings at an average of 9.8, Samson had a point to prove and the right-hander from Kerala started his innings on a positive note. 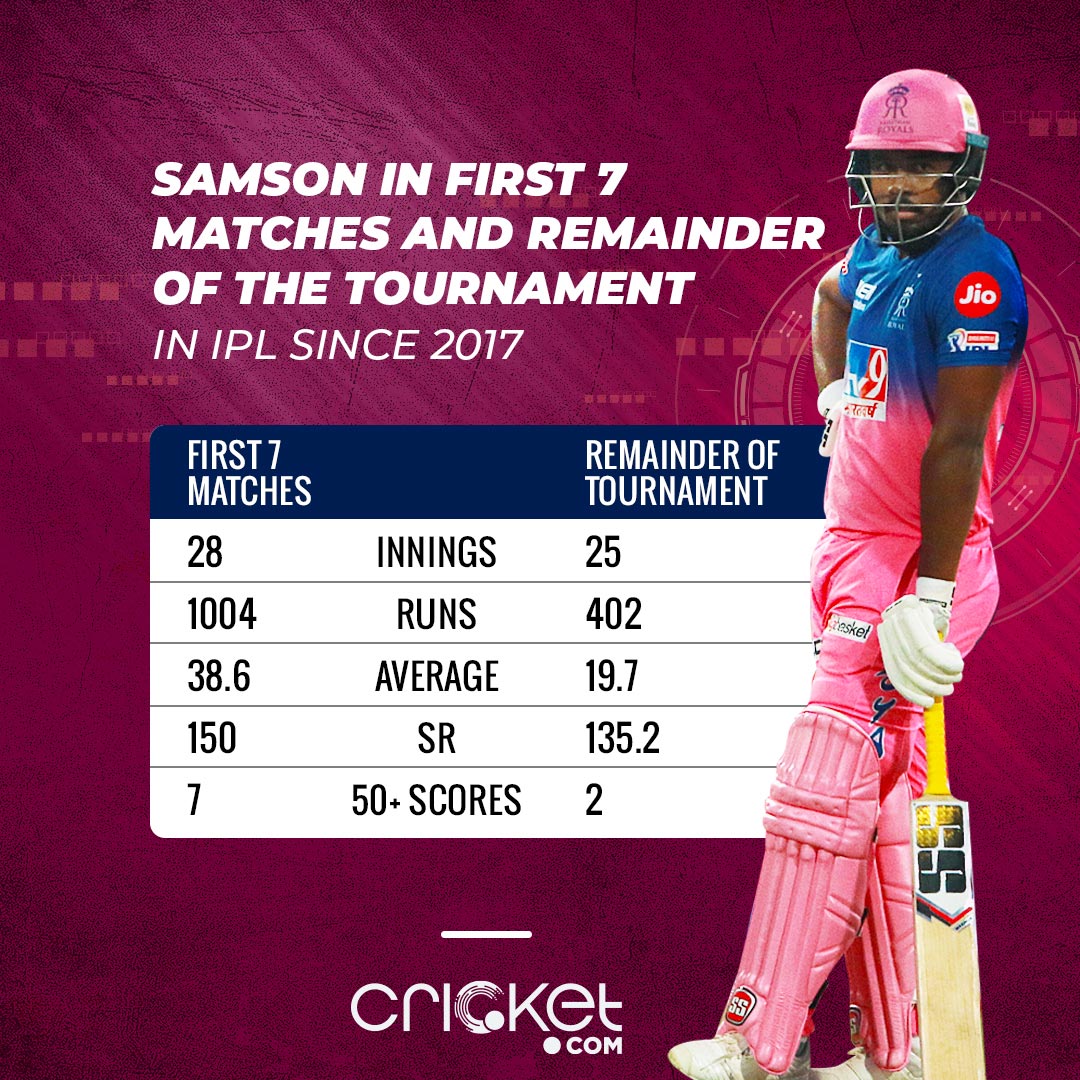 With Stokes struggling at the other end, Samson kept the scoreboard moving with ones and twos, and there were occasional boundaries as well. Samson and Stokes tried to play out Rashid Khan but the legspinner would have dismissed the latter if Vijay Shankar wouldn't have dropped a simple catch at deep mid-wicket.

The two added 56 runs for the second wicket and just when it looked like Samson would go on to get that big score, the 25-year-old played a reckless shot and was knocked over for a 26-ball 36. Before the dust had settled, Rashid put an end to Stokes' misery in the very next over. The left-hander only scored 30 off 32 deliveries and that put extra pressure on the other RR batsmen.

The onus was on Steve Smith and Jos Buttler (9) to score some quick runs but before the latter could do any damage, Shankar had him caught at backward point. Shankar was outstanding with his medium pace and finished with figures of 1/15 in three overs. Both Smith and Riyan Parag were slightly overcautious with their approach against Shankar and Sandeep, before the former finally cut loose in the 18th over.

Parag first scooped T Natarajan over fine leg before lofting one over extra cover for an astonishing six. There was one more boundary as RR accumulated 16 runs from that over. However, before the two batsmen could capitalise on that momentum, Holder (3/13) returned to bowl the penultimate over and dismissed Smith (15-ball 19) and Parag (12-ball 20) to halt Rajasthan's progress. Jofra Archer however smoked a couple of lusty blows in the final over and got Rajasthan past the 150-run mark.

Rajasthan needed early wickets and it was once again Archer who gave them an early breakthrough. Having had the better of Warner (4) on numerous occasions, Archer bowled that uncomfortable length to the left-hander and had him on the back foot from the very first delivery. Warner somehow managed to survive three deliveries but then perished after edging one to the second slip. The right-arm paceman was almost unplayable in his first spell and bowled with great intensity. Archer then castled his countrymate Bairstow (10) with an outstanding inswinger and left SRH reeling. Having lost their two star batsmen, it was up to Pandey and Shankar to form a partnership and the former was surprisingly super aggressive with his approach. 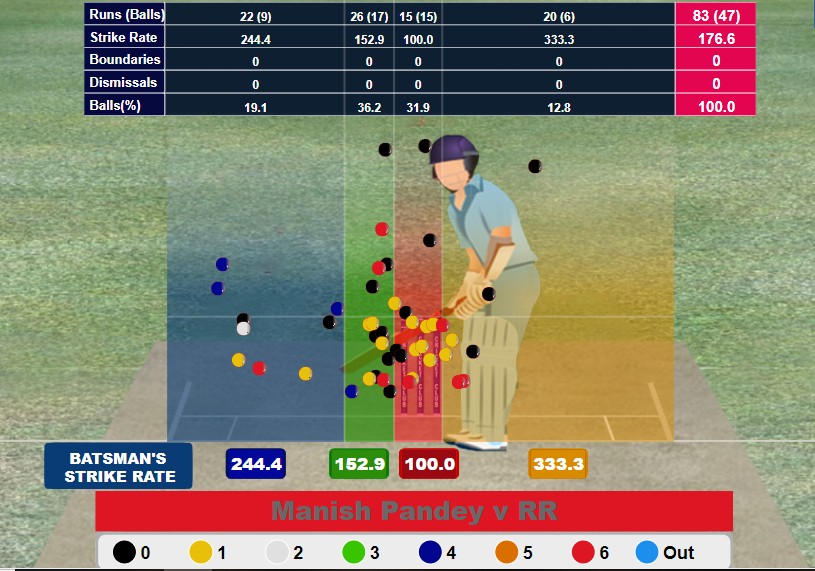 Pandey looked like a different beast altogether and went after Kartik Tyagi and Stokes in the final three overs of the powerplay. The right-hander announced his arrival with a couple of boundaries and then slammed Stokes for two sixes in the fifth over. RR missed a trick by not giving Archer the third over in the powerplay and continued with Tyagi. The young paceman looked clueless against Pandey who whacked him for two sixes and a four in the sixth over and put SRH back on track.

Shreyas Gopal and Rahul Tewatia did slow things down after the end of six overs but Pandey kept the scoreboard moving and completed his 18th IPL fifty in the ninth over. Shankar was more than happy to play the second fiddle but was struggling to rotate the strike. Pandey however kept going and scored most of his boundaries towards long-on and deep mid-wicket. Pandey kept covering the line of the stumps and that allowed him to clobber anything that was within his reach.

Shankar lofted Gopal through covers for consecutive boundaries to get some momentum into his innings but it was still Pandey who was doing the majority of the scoring. The two didn't take any unnecessary risks against Gopal and Tewatia and never allowed RR to make a comeback. Archer was brought back into the attack for his final over but Shankar was well set by then and whacked him for three consecutive boundaries. With 24 needed off 24, Pandey smoked two more sixes before Shankar got the job done with a boundary and also completed his fifty. 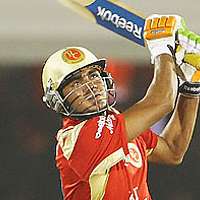