Ravi Shastri and an era of sustained excellence 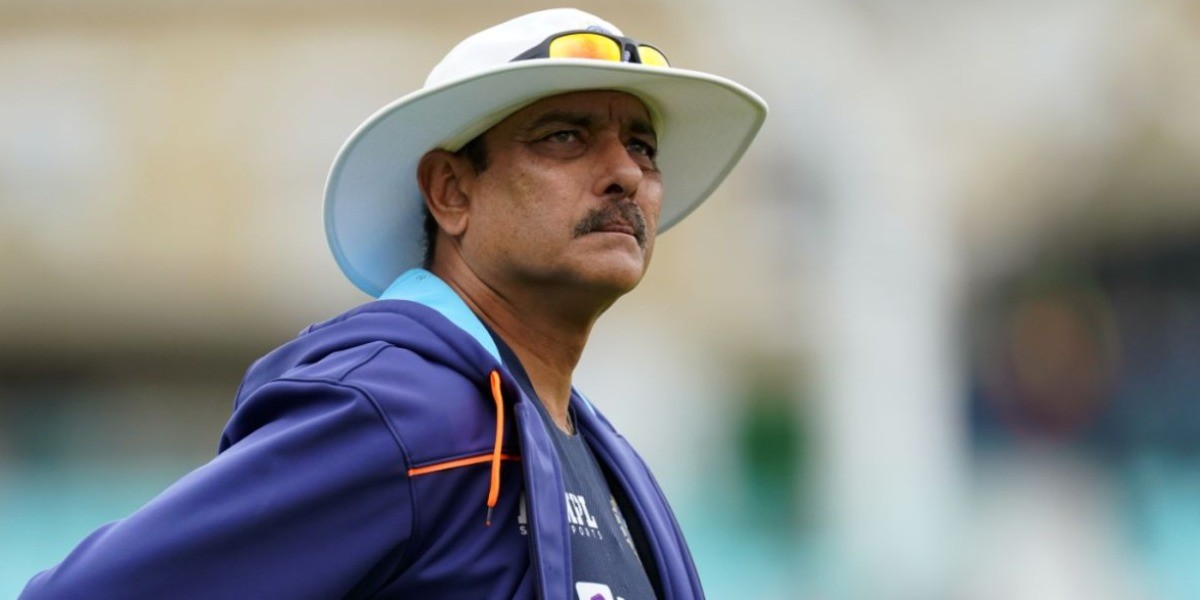 Ravi Shastri and an era of sustained excellence

Ravi Shastri lived his life king-size. From his playing days to his coaching tenure bypassed by some memorable stints as a commentator, Shastri was always beaming with excitement, never letting any outside noise affect him. If it was his habits that made the meme, he was more than happy to provide content in his own inimitable way.

“It’s banter all the way, they do it to have fun at my expense, I will take a laugh yaar, have a drink in my name. Kya farak padta hai, Main nimbu paani piyunga or I will have milk and honey, you have a drink, enjoy karo na at my expense.

“When you post that kind of things (memes) kitna Jan haste hai yaar, kitna Jan khush hote hain (so many people have a laugh, feel happy), enjoy Karo na yaar. As long as the team does well, I am happy," Shastri said in the post-match press conference after the Namibia game, which also brought curtains down on his career as the head coach of the Indian cricket team.

Make no mistake - Ravi Shastri was the fodder. His theatrics and larger-than-life personality often clashed with the perceived values of Indian society, where things were often judged on the scale of “how humble you are” to “what is your credential as a player to coach Virat Kohli”. You’d sense a non-identical token of Ravi Shastri, defined by his spirit intake, was taken over quite early in the 80s and continued through the vein of Indian cricket. 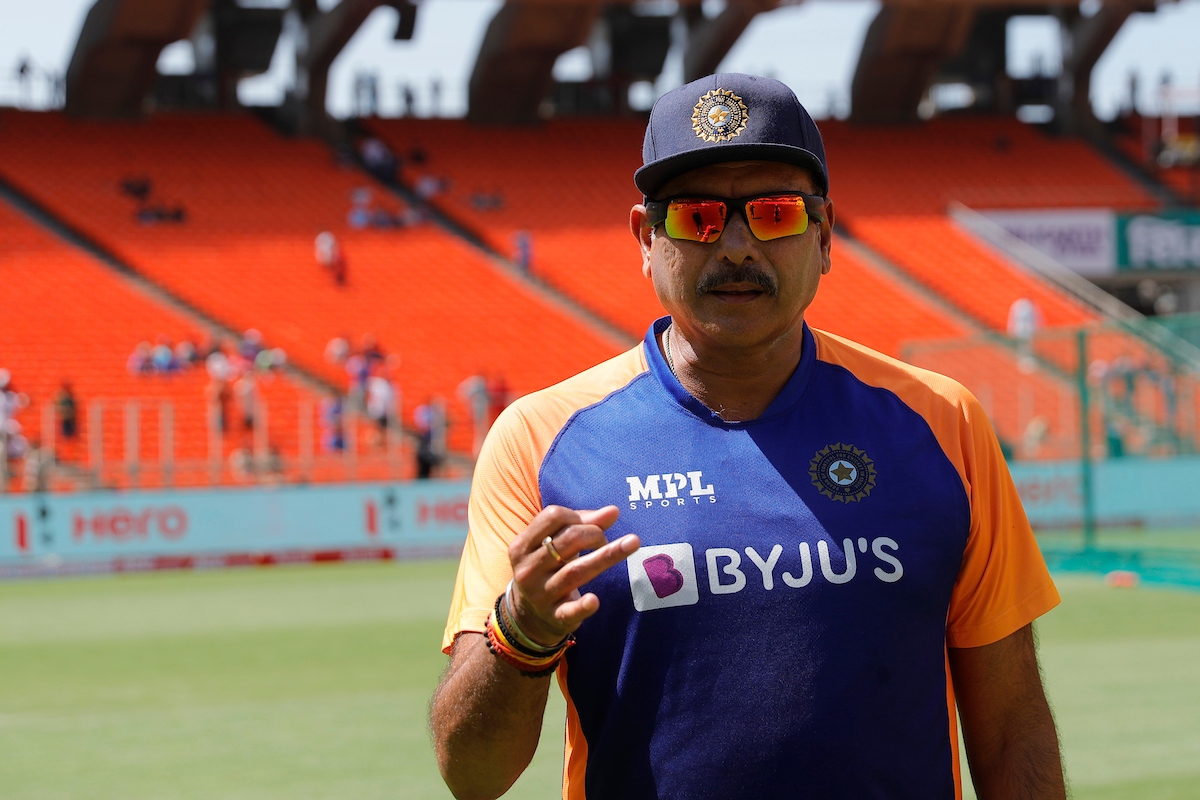 Thus, on every parlance, you’d want to judge Shastri’s tenure as a coach-cum-man manager of this Indian setup, you will fail to find adjectives. Taking over in the aftermath of Anil Kumble’s resignation, where a single misstep could have spelt death keel, not only Shastri aced the test but also spearheaded many campaigns from a strategic perspective that would forever remain a big part of Indian cricket history. In everything that he did, his tremendous mental strength shone through as the hallmark of this Indian side.

He ended his tenure with a win/loss ratio of 1.92 in Test cricket, 2.32 in ODIs, and an incredible 2.50 in T20Is, which formally translates to 58.1%, 67.1%, and 69.2% win percentages in three formats respectively. Among all the coaches since the turn of the millennium, only Anil Kumble, who was at the helm of the affairs in 26 Tests lesser than the Mumbaikar, had a better win percentage in Test cricket but that was bolstered by the fact that most of his matches were played at the comfort of home conditions. 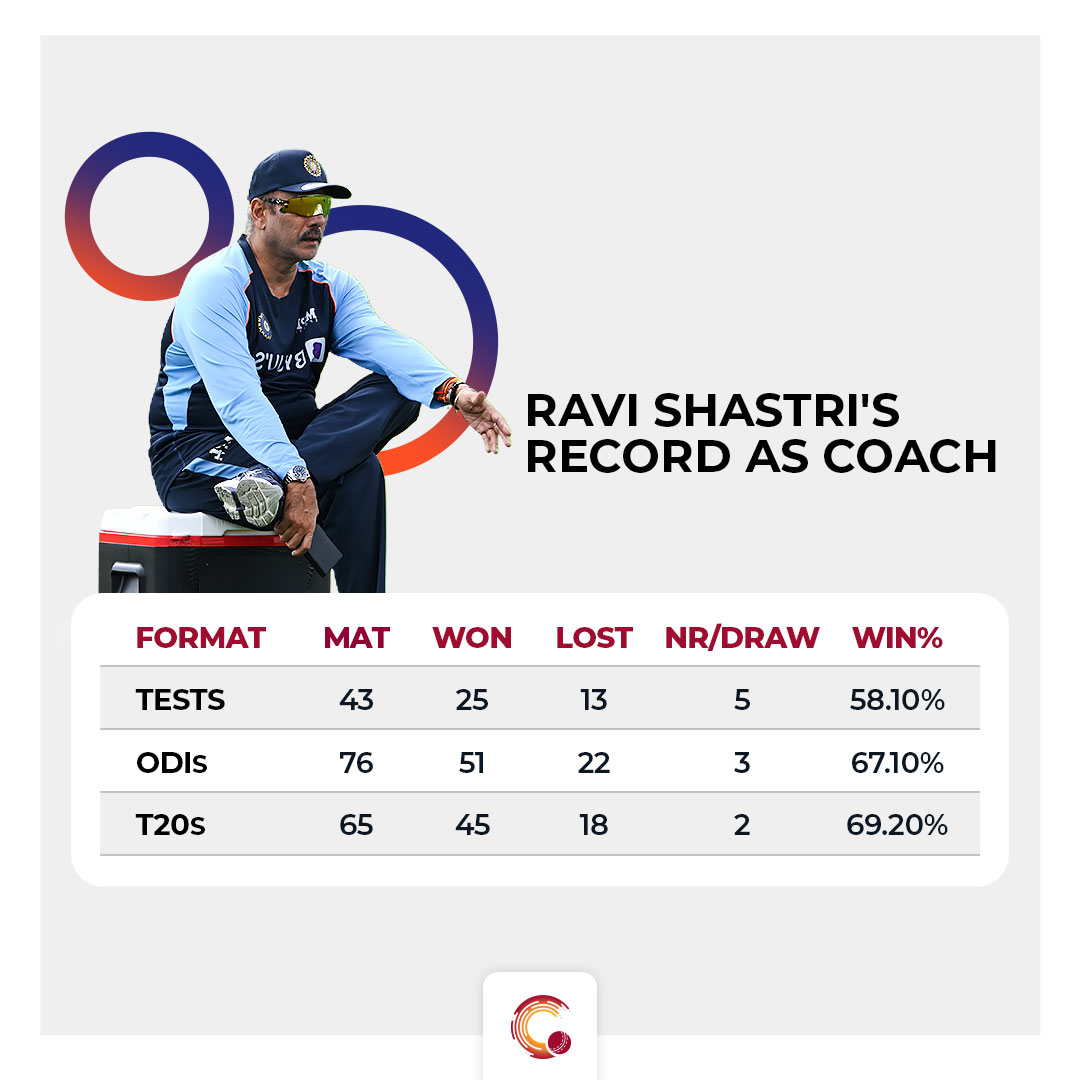 In overseas conditions, Shastri’s team won more matches than they lost - with two consecutive series wins in Australia and 2-1 lead England making this Indian side the best in the whole world. Any coach of any era would take that record without even giving a second thought.

But in the complexities of Indian cricket, you had to do more than that. You need to be a “legend of the sport” to be called a good coach. You are a “Yes Man” if you back your skipper. You don’t have a spine if “you can’t show a mirror to the skipper’s arrogance”. Your success is conveniently forgotten because of “big talk fella”.

When Shastri took over as the Indian coach, the Cricket Advisory Committee, headed by Sourav Ganguly to stamp their authority, bypassed the constitution to appoint Rahul Dravid as the batting coach and Zaheer Khan as the bowling coach of the Indian side. It was a clear violation of a coach’s basic rights of picking his support staff but in such a situation, standing against that plan would have been a PR disaster for Shastri, who himself had very little support from outside. But standing up he did and ensured he got Bharat Arun and Sanjay Bangar on board. 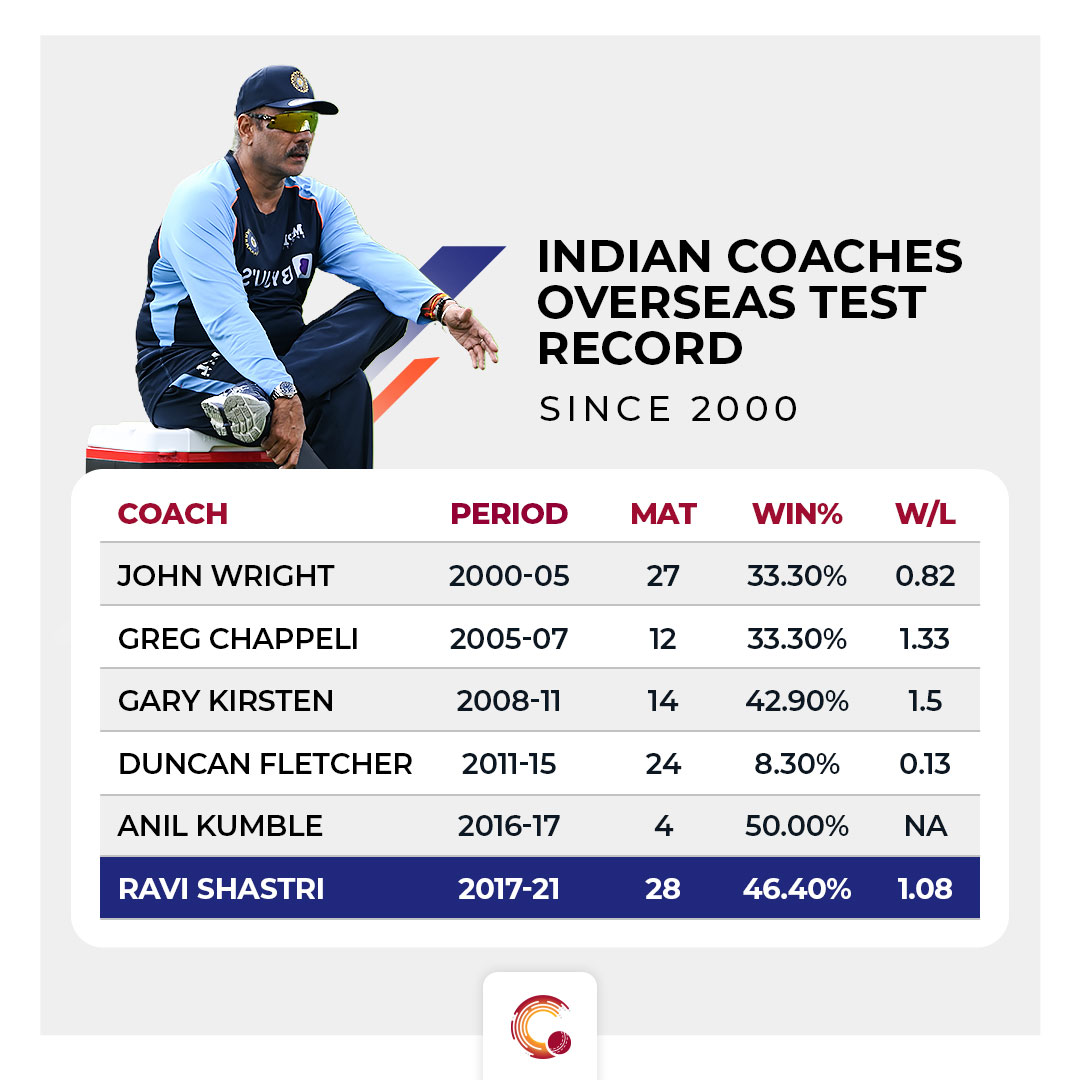 It might be blasphemous to suggest that Zaheer Khan wouldn’t have been successful, but Arun’s dedication in building the set-up alone and creating a fast-bowling revolution has become an institution in itself. The likes of Ishant Sharma, Mohammed Shami, Bhuvneshwar Kumar, and Umesh Yadav grew from strength-to-strength while Shastri’s team blooded Jasprit Bumrah in the most opportune of time to herald a glorious phase in Indian cricket.

Under Arun's watch, Ishant Sharma has had a positive difference of 15.73, Shami 8.25, and Umesh 13.57 to the bowling average corresponding to their figures before Shastri took over as the head coach in 2017. These are some fantastic numbers and a reflection of how India have become a challenger unit in all overseas Test matches. "I call him [Bharat Arun] the guru of that department," Shastri said. He's been in the coaching space for 20 years now, if not more. Not only that but he's coached a lot of coaches. He's conducted a lot of courses. He's certified a lot of coaches. Then come to do this job.

"That's the prime reason I picked him because I wanted to pick people from my stable, which is the NCA, and I happen to be the chairman there for some time. When a system was put in place, that's the time that guys like Sridhar and Arun came into the fore with Dav Whatmore," Shastri said. 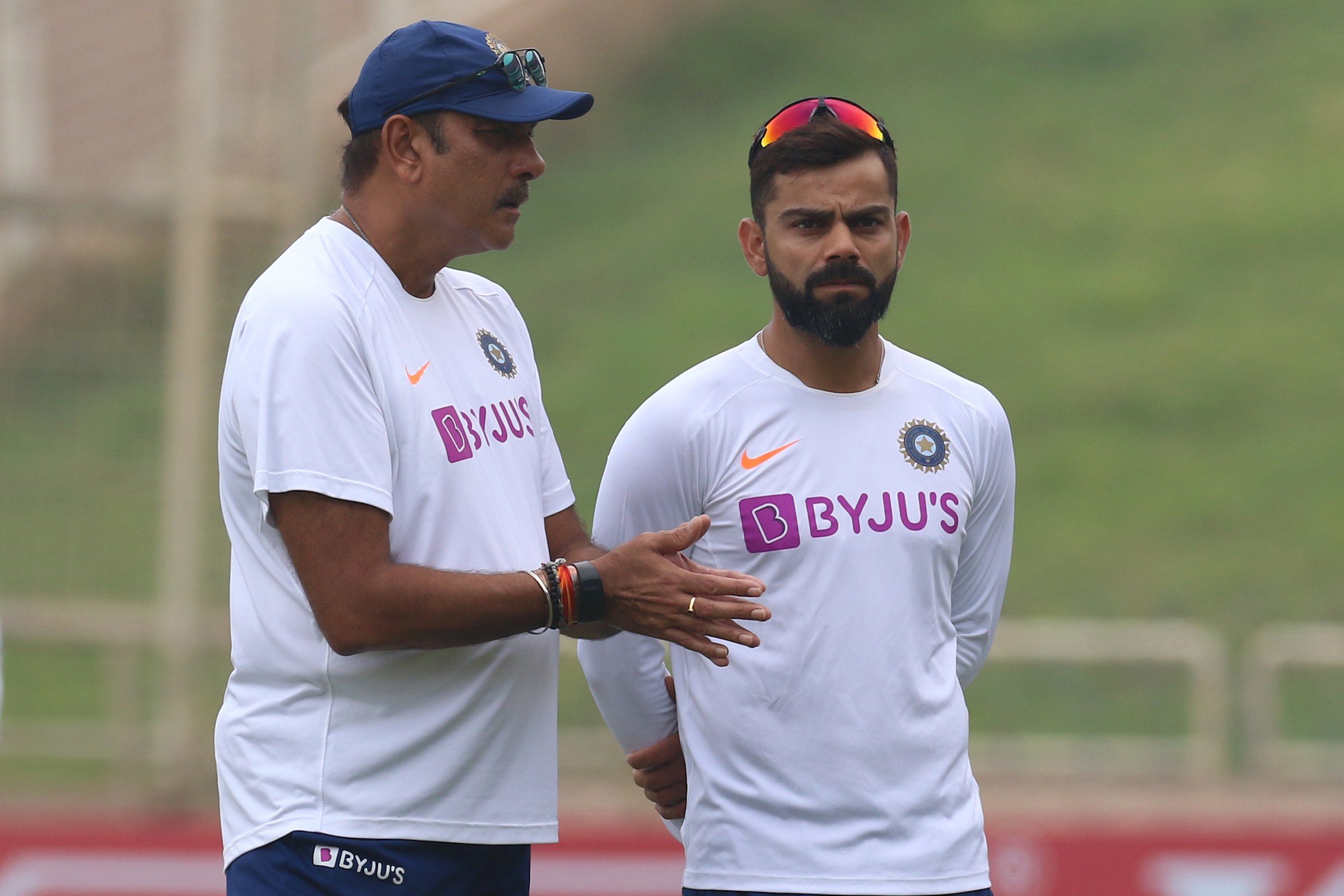 While the focus is bound to affirm with the longest format of the game, Shastri, despite not spearheading the side to a World Cup title, could claim to make Virat Kohli’s side a world-beating unit in the shorter formats. As discussed earlier, he has a win percentage of 67.1% and 69.2% in 50-overs and 20-overs cricket respectively which is only slightly bettered by England in ODIs and Afghanistan in T20Is. India have won the T20I series in every single country they toured, beat South Africa, Australia, and New Zealand in their own den in ODIs, and made some monumental progress as far as building talents are concerned. If one removes the bias of world events, where one-odd bad games decide your fate, Shastri and Kohli's team have left an indelible mark.

"Sometimes in life, it's not about what you accomplish, it's what you overcome. And what these guys have overcome in the last five years, the way they've travelled across the globe and performed in every corner of the globe in all formats of the game will make this - irrespective of what's happened here - as one of the great team's in the history of the game. I have absolutely no doubts in my mind,” Shastri said and one will really struggle to find a strong reason to disagree.

His tenure has now come to an end and India are all set to start a new journey under the stewardship of Rahul Dravid. But this much is sure that Dravid has some big shoes to fill and if he can match what India achieved under Shaz and keep up with the progress, India will be in a good place for years to come.