RCB prevail in nail-biter at the Eden 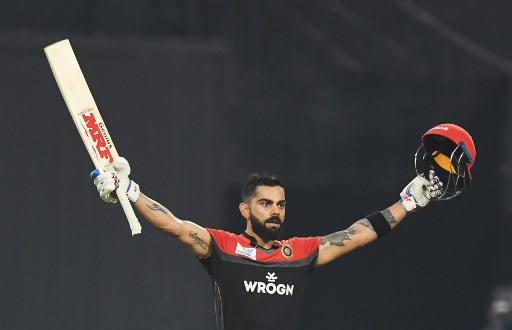 RCB prevail in nail-biter at the Eden

One runs out of superlatives while attempting to describe the clash between Royal Challengers Bangalore and Kolkata Knight Riders.

The magnificent Andre Russell doing what he does best with a devastating 65 off 25 balls, Nitish Rana scoring a brilliant 85 from 46, but what stood out and made the difference was a marvellous Virat Kohli century (100 off 58 balls). This was Kohli’s fifth century in the IPL and handed RCB a much needed 10-run victory, keeping their slim hopes of a Play-off spot still alive.

On the back of Kohli’s innings, RCB amassed 213 for four before restricting Kolkata to 203 for five and condemning Dinesh Karthik’s men to a fourth consecutive defeat.

Earlier, Kohli’s ecstasy was in contrast to Kuldeep Yadav’s shambolic outing as the Indian skipper whipped the penultimate ball of the innings to deep square leg when he was on 96.

Kuldeep scampered across but let the ball slip from under him to spark frenetic celebrations at the on Friday. Kohli was pumped and Kuldeep looked like he just wanted to dig a hole in the ground and bury his head in it.

The Eden Gardens resounded with the sound of leather on willow as ‘King’ Kohli came out like a man on a mission.

At the toss the RCB skipper mentioned that every game hereafter would be like a final and it was a classic case of cometh the hour, cometh the man, as Kohli led from the front with 100 off 58 deliveries. For the second time this season, RCB posted a score in excess of 200 against Kolkata Knight Riders (posting 205 at the M Chinnaswamy Stadium which was eventually chased down).

After a sedate start, the loss of Parthiv Patel and Akshdeep Nath, Moeen Ali and Kohli were circumspect to begin with but launched in the 12th over. Ali did have a slice of luck going his way when UltraEdge showed a spike in the last ball of the 11th over but neither did Andre Russell or Dinesh Karthik appeal.

Ali utilised the let off fully and even went to the extent of ensuring Kuldeep was reduced to tears at the end of his spell. It has not been Kuldeep’s most prolific IPL season but things went from bad to worse.

Bowling the 16th over, the Chinaman was carted for 27 overs before dismissing Ali off the final ball of his spell, hardly any consolation, as he broke down and was consoled by substitute players.

Despite Ali’s departure for 66 off 28 balls, Kohli was in no mood to relent and assumed the role of the aggressor. His acceleration was evident by the fact that his first 50 runs came off 40 balls and the remainder of his runs took just 17 balls.

With a big chase at hand, KKR made a hash of the start with Dale Steyn producing a magnificent burst in the Powerplay and accounting for Chris Lynn in the first over.

Sunil Narine and one drop Shubman Gill were then scratchy at the best and departed in consecutive overs courtesy of Navdeep Saini and Steyn respectively.

Robin Uthappa’s sluggish knock (9 off 20) meant KKR were faced with a herculean task of scoring 136 from just over eight overs.

Kolkata’s never-say-die attitude seeped through Russell and Rana with the duo hammering the RCB bowlers to all parts of the park and inching towards a miraculous result.

With 24 required off the last over, Ali was handed the ball and kept KKR down to 13, much to relief of RCB fans, closing out one of the best games of this season. 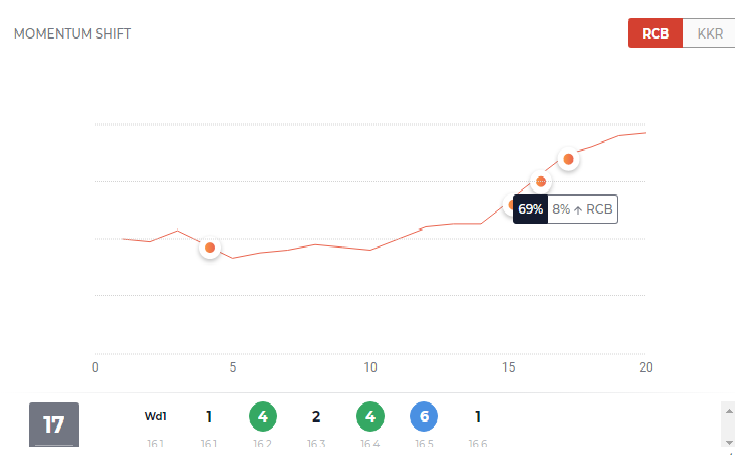 After scoring 19 off Harry Gurney’s 17th over, RCB’s win percentage shot by eight to be at 69%. 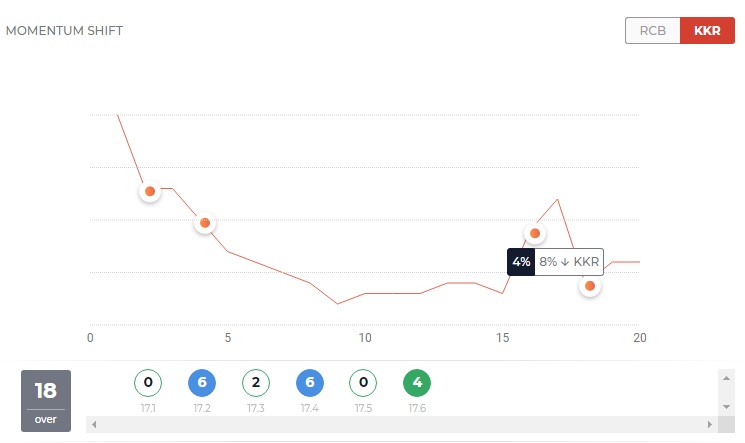 Despite Russell and Rana carting Steyn for 18 runs in the 18th over, KKR saw their chances of a win drop by eight per cent. 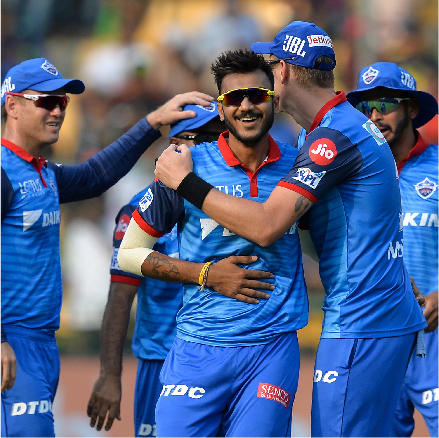