Royal Challengers Bangalore stumble but remain in the race 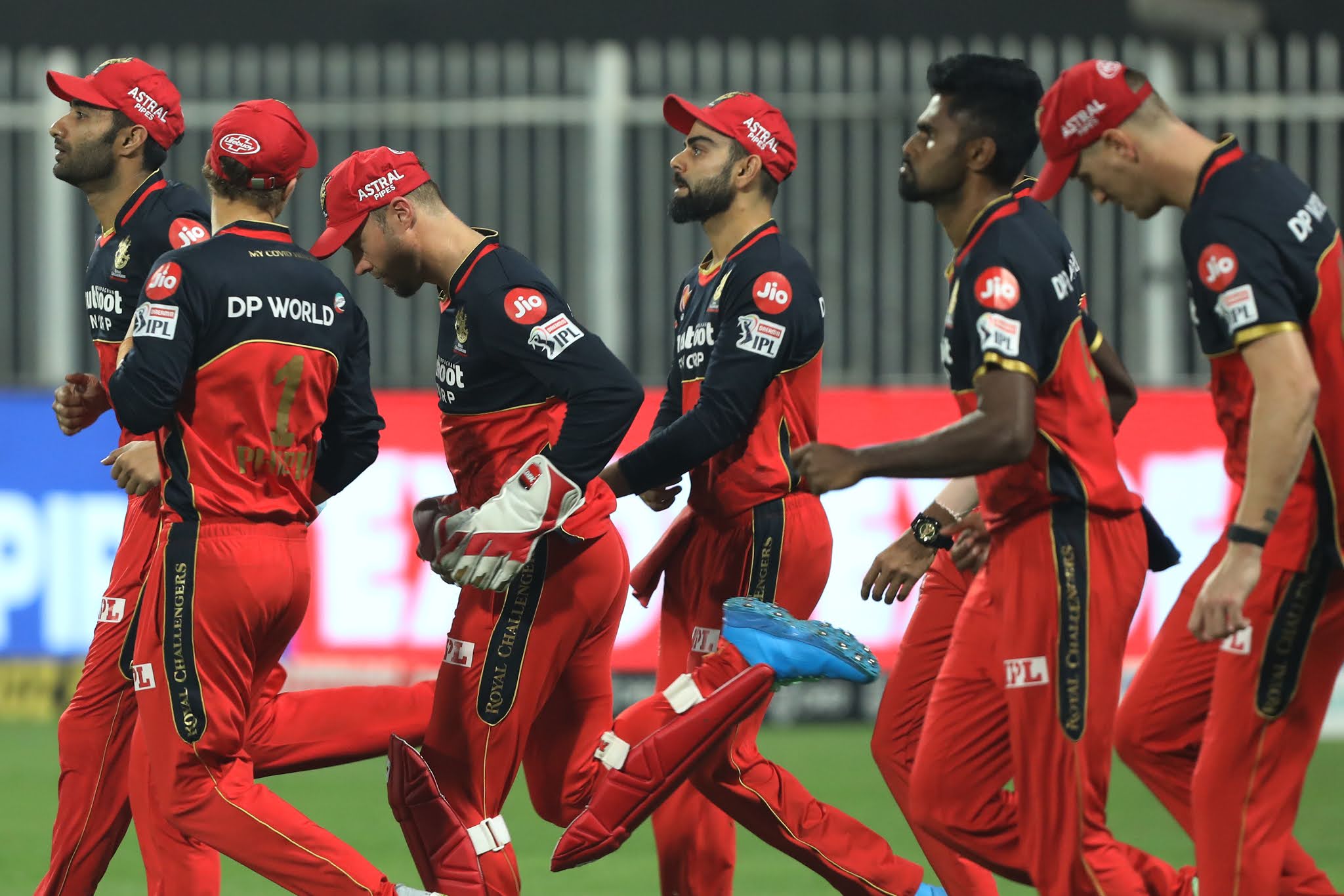 Royal Challengers Bangalore stumble but remain in the race

Anyone who even has a passing interest in cricket will know that Royal Challengers Bangalore (RCB) are yet to win an Indian Premier League (IPL) title. They have often been ridiculed for the same. In the past three seasons, they have faced even more ridicule, having finishing at the foot of the table twice and failing to make playoffs on each occasion.

For large parts of the season, it looked like RCB would rebuke that trend easily. After their first 10 matches, they had won seven, had 14 points on the board and looked comfortably poised to not only reach the playoffs but also possibly end the league stage in the top two. In the end, though, they managed to just scrape through in fourth place because of a superior net run-rate (NRR) over Kolkata Knight Riders. The difference in NRR between the two teams? 0.04.

So, what has gone wrong for the Royal Challengers over the last few matches?

In Virat Kohli and AB de Villiers, RCB have two of the greatest batsmen in the history of the game at numbers three and four, yet it is the middle-overs that have been a huge area of concern for them.

After the loss against Delhi Capitals on Monday (2 November 2020), there was an interesting line from captain Kohli in the post-match interview. “We can be more brave with the bat in pockets," he said. The “pockets” Kohli was referring to was obviously the middle phase of the innings where RCB’s batting has often staggered through the season.

Between overs 7-15, the Royal Challengers have the lowest run-rate (6.9) by a fair margin. Every other team has scored at least 0.5 runs per over more during that period, with the other three playoff teams scoring at least one run per over more. A batting average of 32 indicates that loss of wickets hasn’t been a huge issue, it’s just that RCB have been batting too cautiously. 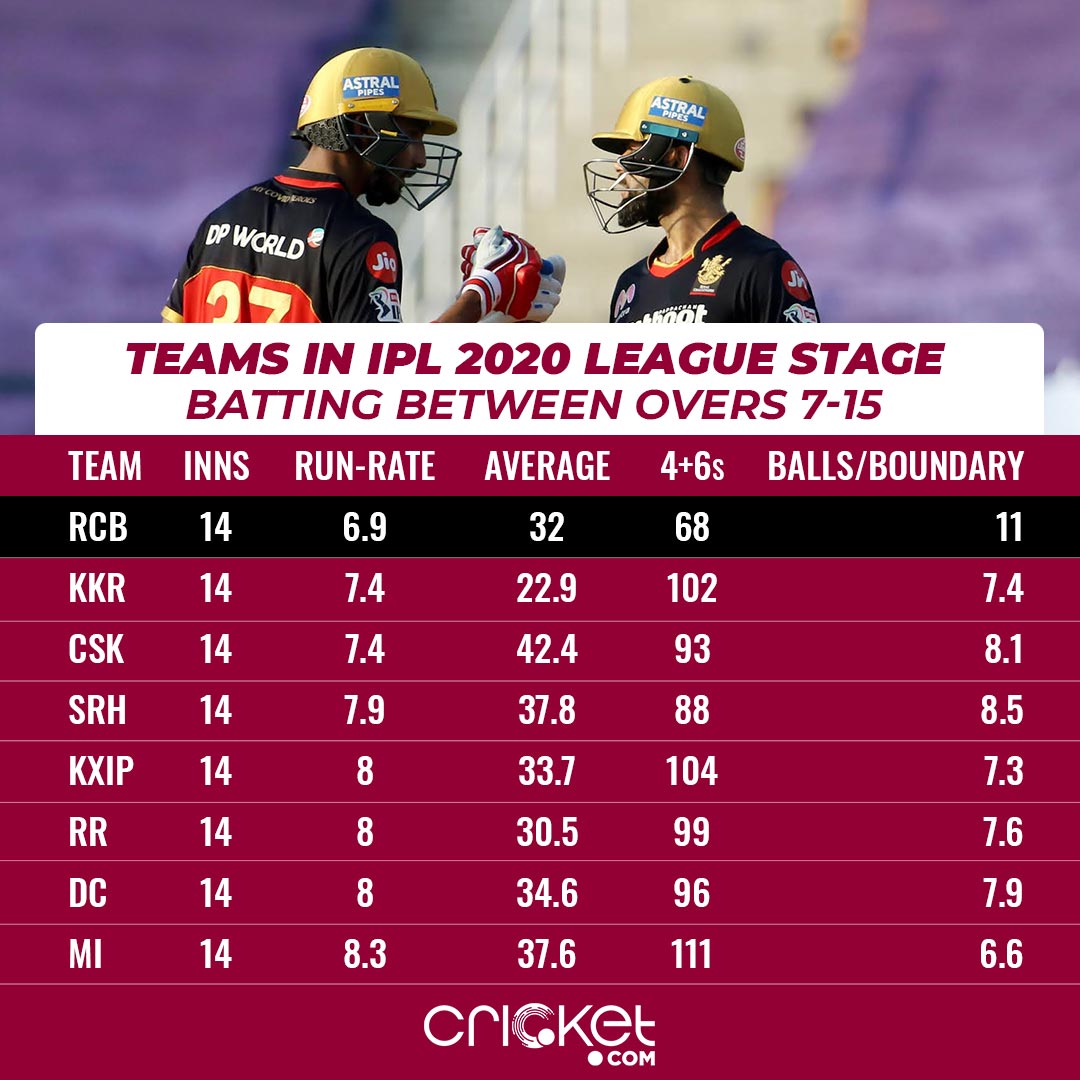 Unsurprisingly, the aforementioned issue has been largely because of RCB’s reluctance to look for boundaries. Between overs 7-15, the team from Bengaluru have managed just 68 boundaries in IPL 2020 which is again the lowest by a distance. While every other team are scoring a boundary every 8.5 or lesser deliveries in the middle phase of the innings, they’ve managed to find the fence once only every 11 balls.

Kolhi, himself, has looked out of touch at times this season. While a batting average of 46 looks good on paper, his scoring rate has been subpar. Again, the issue has been boundary-scoring. In 12 seasons of the IPL previously, Kohli’s worst deliveries per boundary rate was 7.8 in 2012. This year, that number is as high as 11.1 which is far from ideal. If Kohli can sort this issue out, then RCB will stand a great chance of making inroads during the playoffs.

Devdutt Padikkal was tipped for great things after a superb 2019/20 domestic season and you can say that he has lived up to expectations. Apart from the inaugural edition in 2008, no batsman has scored more runs than Padikkal’s 472 in a debut IPL season.

Critics have pointed out that his batting strike rate of 126.5 is subpar, but that should improve in the years to come, especially considering his scoring rate in domestic cricket.

The top-order’s mundane approach has often put de Villiers under too much pressure in the latter stages of the innings. Hence, it’s no surprise to note that RCB’s results have been very dependent on the former South Africa captain’s performances with the bat.

Every time de Villiers has scored 50+ this season, the Royal Challengers have come out victorious. In fact, he has a batting average of 123 and a strike rate of 203.3 in matches won while the numbers in losses are 21.71 and 124.6 respectively in losses. 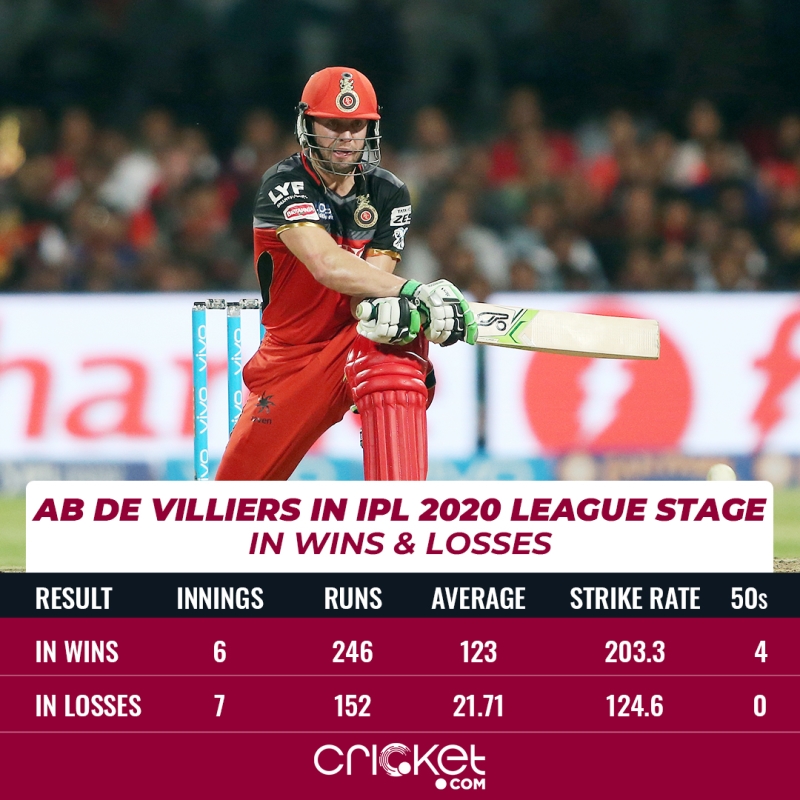 You wonder if RCB will look to bring in Moeen Ali to strengthen the middle-order. The England allrounder has a batting strike rate of 168.2 against spin in T20 cricket which could be very useful for RCB considering their current predicament.

While RCB’s batting against spin has been below-par, especially in the middle phase of the game, their own spinners have been excellent with the ball this season.

Yuzvendra Chahal has been one of the finest bowlers in the league since he joined the Bengaluru-based franchise in 2014 and unsurprisingly has been the team’s leading wicket-taker this season as well – 20 wickets at a strike rate of 16.

Chahal has been magnificently supported by Washington Sundar. While the Chennai-born cricketer hasn’t been a prolific wicket-taker, batsmen have constantly struggled to score quickly against him. In fact, among all players who have bowled at least five overs in IPL 2020, only Rashid Khan (5.3) has a better economy rate than Sundar (5.8) currently.

With their contrasting styles, Chahal and Sundar have complimented each other brilliantly and, thereby, played a massive role in Royal Challengers’ run to the playoffs. When you consider spin bowling among all teams in IPL 2020, RCB’s economy rate (6.9), average (25.6) and strike rate (21.5) are all second-best, only behind SRH who possess the tournament’s best spin bowler in Rashid. 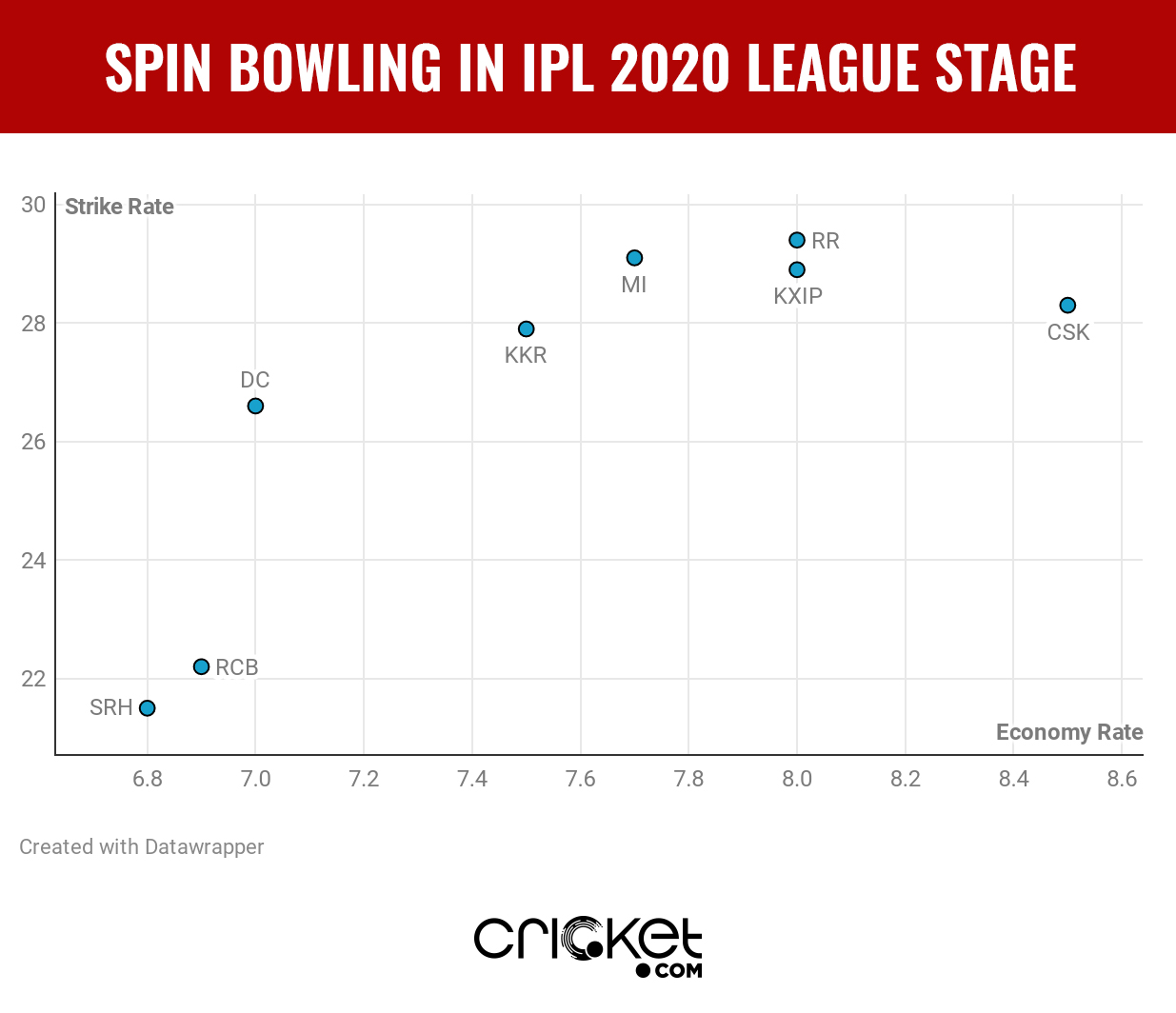 On the pace bowling front, Chris Morris has done well since he came into the side while Navdeep Saini, Mohammed Siraj and Isuru Udana have made important contributions at times. Morris and Saini had fitness worries during their last league match against the Capitals which is a cause of concern for Kohli and co.

On Friday (6 November 2020), RCB will be up against a side whose trajectory of form has been exactly the opposite. Sunrisers Hyderabad looked like they were on the verge of being eliminated before registering thumping victories in their last three games to secure a playoff berth.

Having finished outside the top two, RCB need to emerge from four successive losses in the league stage and secure three consecutive wins in the playoffs. It’s not going to be an easy task, but when have the Royal Challengers ever made things undemanding for themselves?