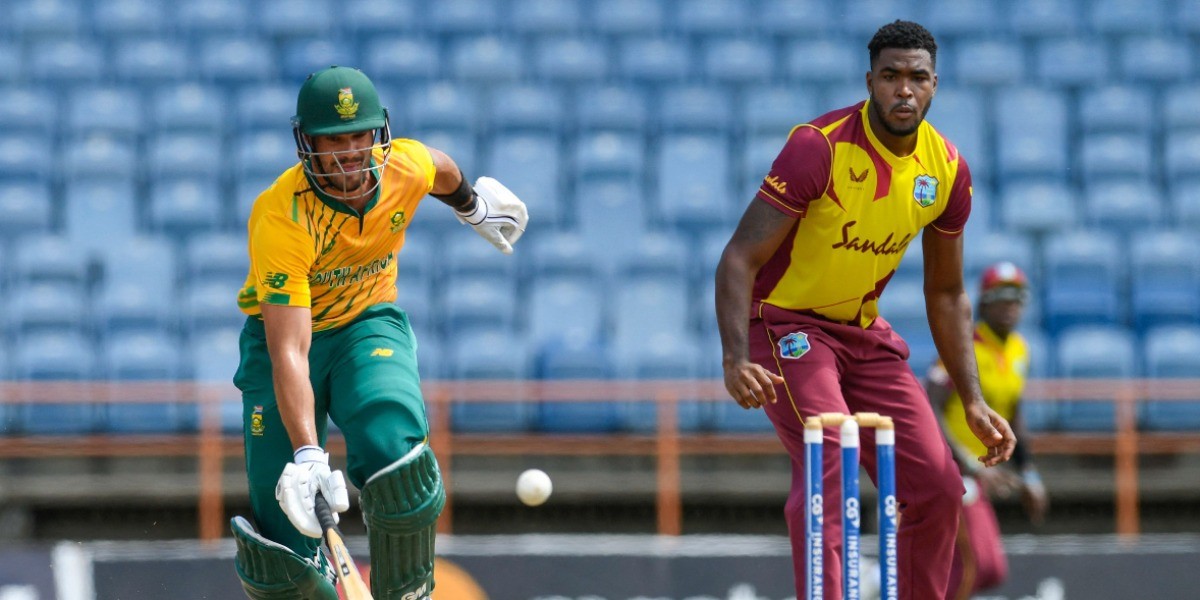 Five-match series are an anomaly in T20 internationals but the proceedings of the recently-concluded series between West Indies and South Africa have set the bar high. Many predicted a 0-5 scoreline when South Africa were hammered in the first T20I. They came back, took the lead before West Indies levelled the series. In the end, it came to the fifth T20I to decide the winner which the visitors clinched to emerge victorious with a 3-2 scoreline.

It was the first time South Africa won a T20I series decider since 2012. It is a pleasing result for a nation struggling to find its feet in the format. However, an extended perspective of the series lied in preparations for the T20 World Cup. Despite the series win, South Africa have left most of the questions unanswered. They played with the same XI for the most part of the series. As many as five of their players did not get a chance in the middle.

Now they only have a three-match T20I series against Ireland before the T20I World Cup in October-November.

South Africa losing steam with the bat as the innings progressed was the most common theme of the series. Except for the fourth T20I, the only match when they were chasing, South Africa constantly laid a good platform for themselves - scores of 86/2, 95/1, 91/3, 87/1 - but never went beyond 160s. 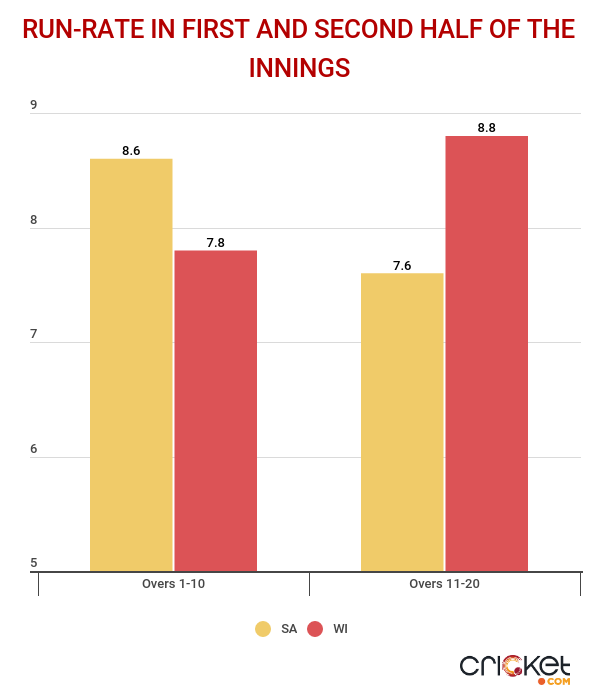 The nosedive was a consequence of West Indies’ bowling plans - slower balls away from the batsmen’s arc - but a downhill trend continuing for as long as five matches are worrisome.

It is also a reflection of South Africa relying heavily on one man for their batting returns - Quinton de Kock. The opening batsman scored 255 runs in the series while the next best for South Africa was Aiden Markram - more than 140 runs behind at 113.

Rassie van der Dussen started with a fifty but could not build on it to constitute a big series. David Miller batted at an average of 13 in five innings. Is number six the right spot for him? Is number three the right position for the skipper, Temba Bavuma? There are no answers yet.

Where are the All-rounders?

South Africa played only two all-rounders in the series - George Linde and Wiaan Mulder. On slow surfaces, both justified their bowling credentials but none of them was convincing with the bat. Linde could not buy a run (nine runs in four innings) while Mulder only got one match. Andile Phehlukwayo was benched throughout the series. There was a time when South Africa were an army of all-rounders. Now, they don’t have a single all-rounder to rely on. In this series, they did not try many options.

Another aspect that used to be South Africa’s strength was the pace department. In this series, they were the more vulnerable aspect of their bowling attack. 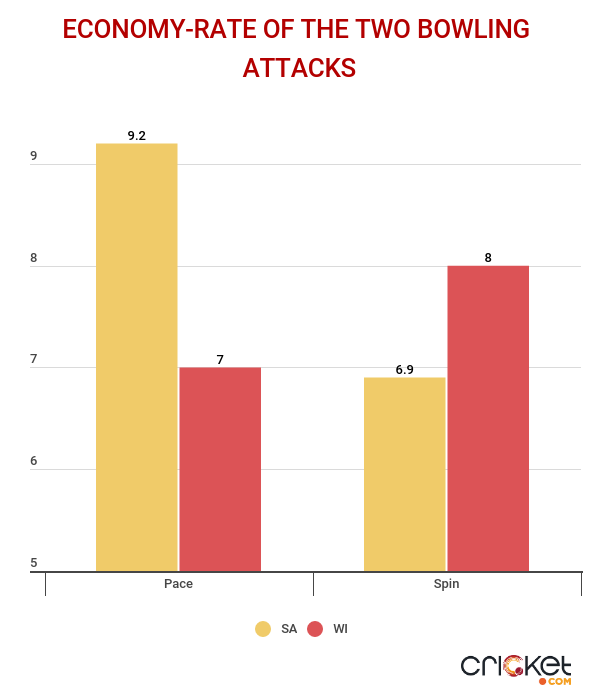 If you take out Anrich Nortje’s contribution and the one over bowled by Mulder at the death, Kagiso Rabada and Lungi Ngidi leaked runs at 12.9 runs in the last five overs. Ngidi picked only two wickets in the first four games and it was a surprise he got as many chances when Lizaad Williams and Sisanda Magala were waiting in the wings. Again, South Africa did not do any favour to themselves except finding out that Nortje is their best white-ball bowler.

The only positive, and a huge one, was the impact of the spinners. The combination of Linde and Tabraiz Shamsi consistently choked the hosts. Shamsi, the Player of the Series, was the biggest positive as he reduced the count of the loose balls to a bare minimum. He picked seven wickets while bowling at an economy of 4 runs per over. South Africa will hope the performance of their spinners won’t be restricted to the slow decks of the Caribbean.

West Indies have further established themselves as a one-trick pony in both departments - keep aiming for the big shots with the bat and take the pace off with the ball. The problem is that the pitch will suit only one of these methods at once.

As many as 37% of the deliveries by their pacers were different variants of slower balls. On the slow surface of Grenada’s National Cricket Stadium, they thrived, especially Dwayne Bravo and Obed McCoy in the death overs. However, their batsmen faced a roadblock against the Protea spinners. That is what cost them the series.

Whether it was their lack of trust in defence or the eagerness to stay on board with the squad’s ‘hit-out or get out’ theory, there were many instances of  West Indies’ batsmen attempting to slog their way out of troubles, hence failing to chase the target thrice in the series. If you look at their previous T20I series - versus Sri Lanka at home - you will have to admit they have a problem facing spin when the track is slow. Given the T20 World Cup is in the UAE, this can turn out to be the kryptonite for the defending champions. 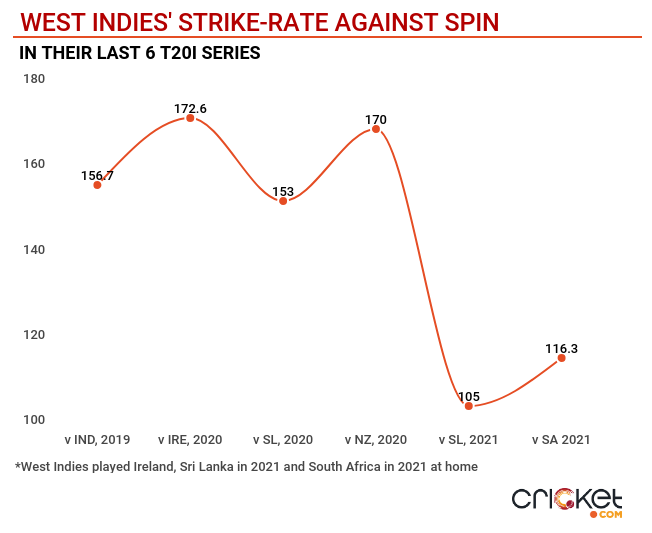 In other takeaways, West Indies would be happy to have a fitter Andre Russell who has emerged as a potential four-over bowler. Though his batting returns remain dry, but they have other all-rounders in Jason Holder and Fabian Allen. Evin Lewis has sealed his position at the top and there are Andre Fletcher and Lendl Simmons to partner him. This means Chris Gayle will stay at number three for them. Nicholas Pooran and Shimron Hetmyer’s form stay a concern

One element they would like to discover is how Bravo and McCoy fare when dew sets in. The five T20Is at the same venue and at the same time did not offer any change in conditions which were dry throughout. In any case, West Indies have 10 more T20Is to reach a conclusion for their final combination for the T20 World Cup.