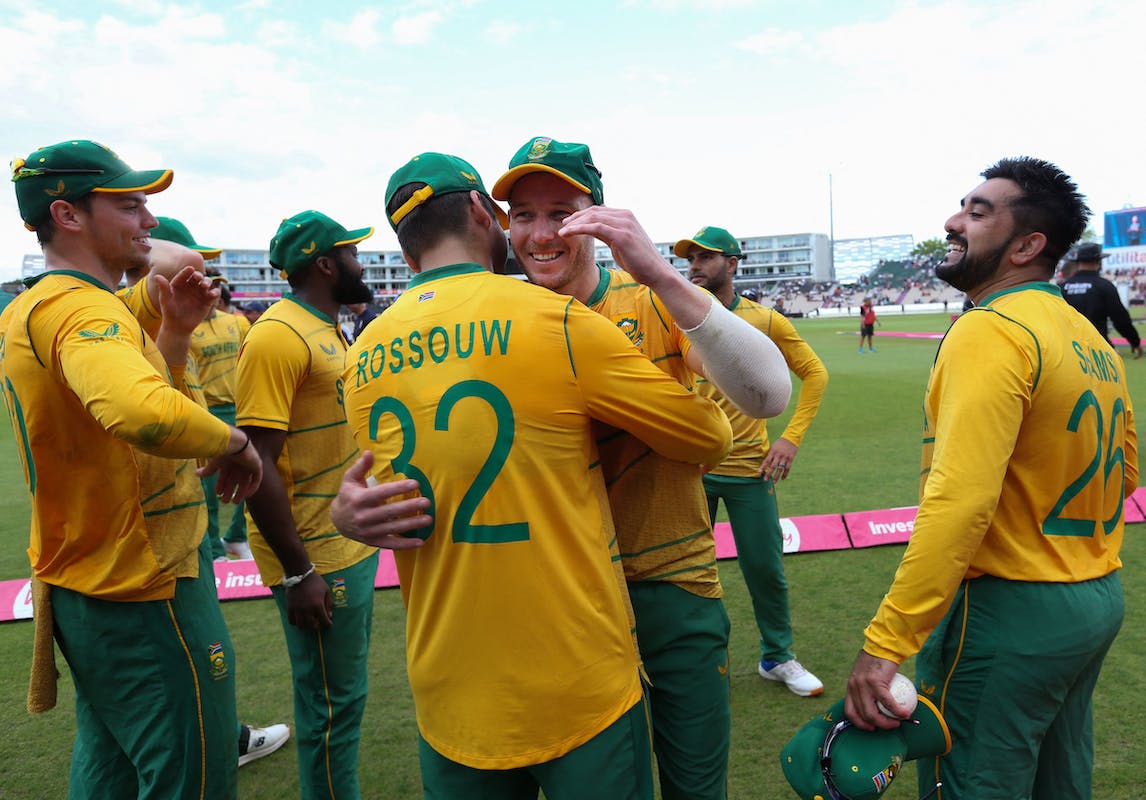 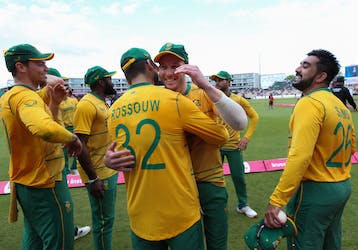 After several years of doldrums, South Africa cricket is back on its feet and they are one of the most balanced sides leading towards the World Cup

There is a lot to admire about South Africa cricket at present.

Not long back, things were different. Between January 2018 and May 2021, the Protea fire was largely extinguished. They won only 49 of their 101 international fixtures.

A majority of their senior players retired unceremoniously. Many other potential superstars opted for the now defunct Kolpak deal, thus breaking their ties with South Africa cricket. The board was in a tussle with itself, answering questions raised on their conscience against racism. When Covid happened, South Africa were one of the most-affected cricketing nations, with multiple home series getting abandoned, affecting their finances during a dire need of funds.

The aforementioned period brought some ignominious lows: Test series defeats against Sri Lanka both home and away, finishing seventh in a 10-team 2019 World Cup being a few of them. Harsha Bhogle in 2021 tweeted that the talent pool in South Africa is declining. The tweet attracted severe criticism but one could sense the thought behind his words.

Such was their free fall that the only way forward was up. June 2021 onwards, South Africa have won 31 of their 49 international fixtures. Losing only 14 of these games, they have improved their win percentage significantly to 63.3%.

Since June 2021, South Africa haven’t lost a Test series and twice, they have come from behind to level or win the series. Their ODI graph has been up and down but the T20 record has been top notch. 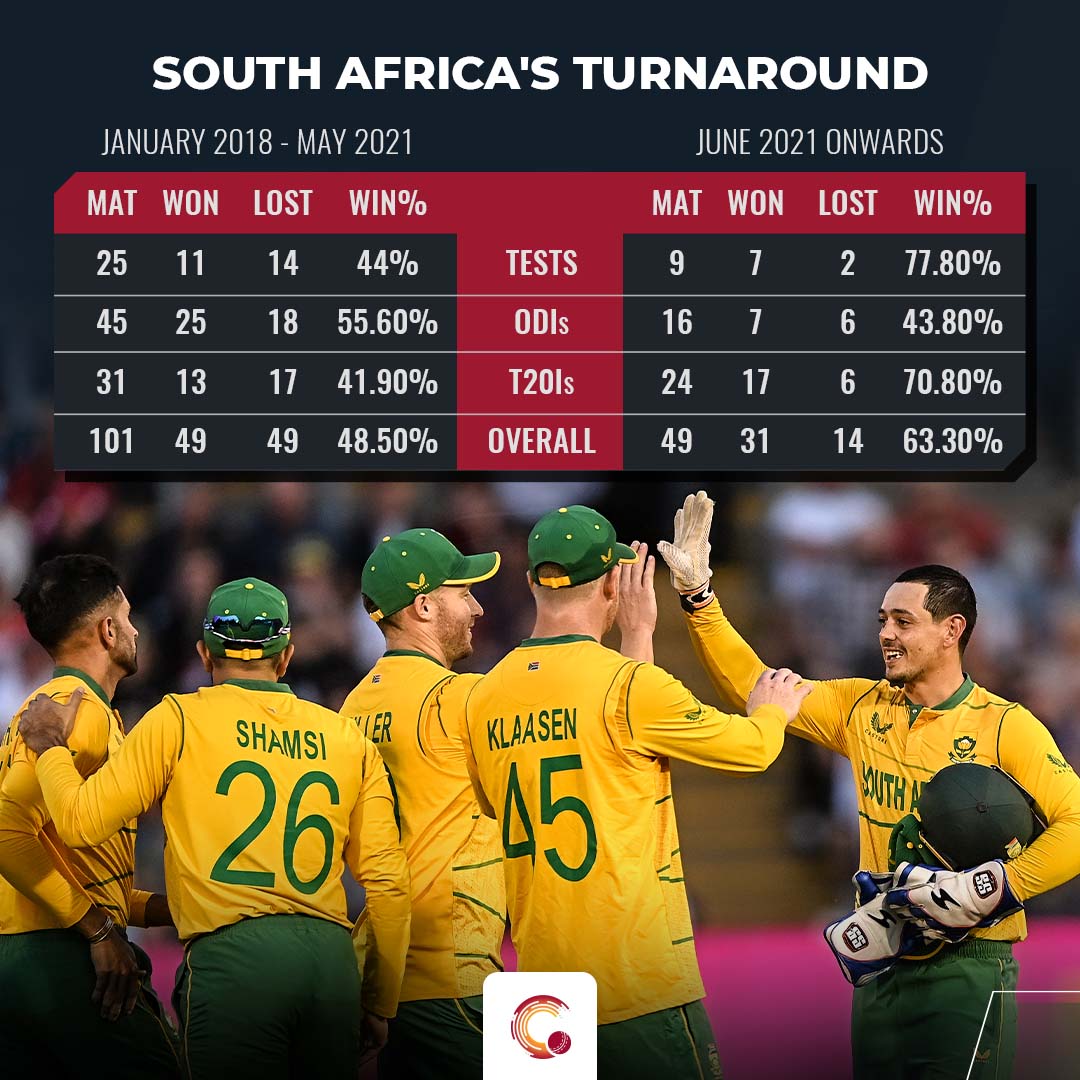 The T20 World Cup last year was the first sign of things moving in the upward direction for the Saffars. Featuring in the tougher group, that marked the presence of many favorites for the tournament, South Africa missed out on the semi-finals only by net run-rate.

The World Cup onwards, they didn’t play until June 2022. They drew 2-2 against India and now, they have defeated England in England 2-1. The turnaround within the span of a year is worth a word or two of appreciation.

From being called out for a shortage of talent, they now have a happy headache of multiple options for every spot.

Will the skipper miss out?

The headaches start right at the top. Both Reeza Hendricks and Aiden Markram fired for the Proteas in England. That diminishes the breathing space for Temba Bavuma, the skipper who missed the series due to an injury, to get back in the XI. Bavuma lags in both departments - the average and strike-rate. 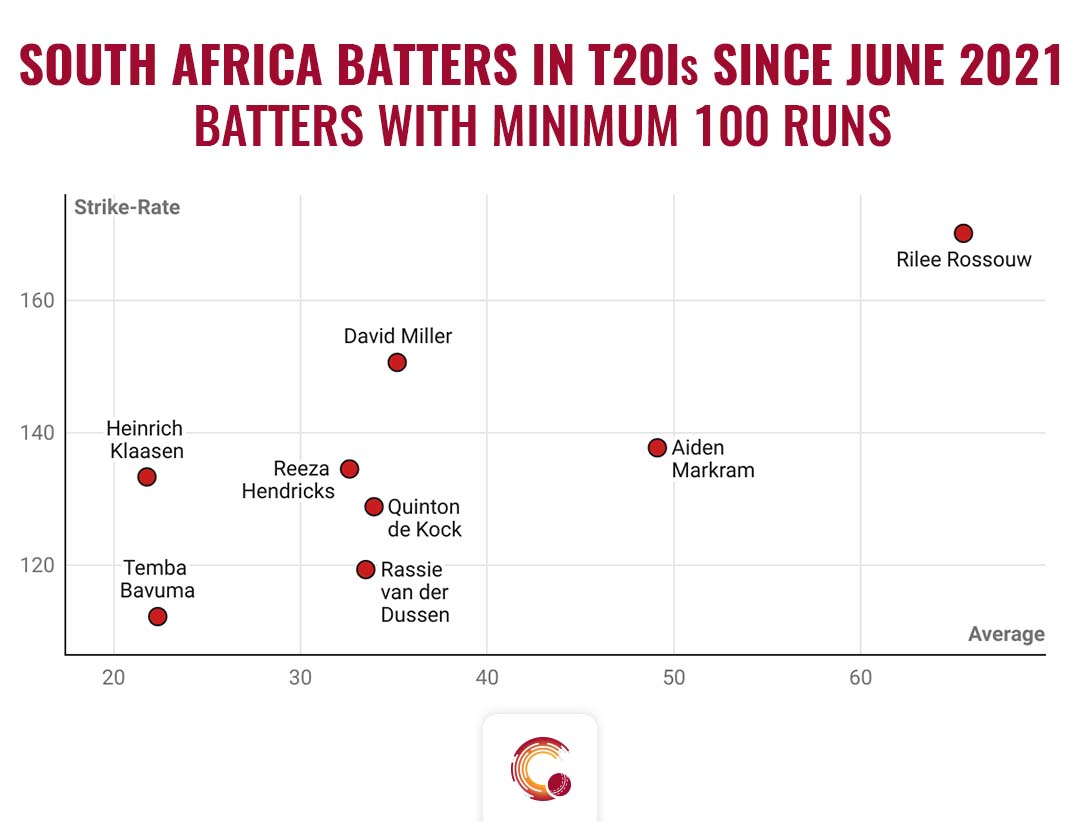 Markram can bat in the middle-order, as he has done over the past one year, but with Rilee Rossouw back in the mix, the equation isn’t that simple. Remember, Rassie van der Dussen didn’t feature in the T20Is against England but has done enough to claim his spot.

Rossouw, back in the side following a six-year long hiatus, has turned himself into the ideal left-handed middle-order batter after becoming a T20 globetrotter. Every bit of it was visible during his unbeaten 96 in Cardiff. Knowing Quinton de Kock is a certainty, there are six options for the top four.

South Africa have also built a couple of alternatives for number five - Heinrich Klaasen and Tristan Stubbs. Any team would want the striking power of Stubbs but Klaasen has done well enough to stay in the mix. He also offers a backup wicketkeeping option.

Such is the talent pool that Dewald Brevis - touted as the next AB de Villiers - will have to keep waiting for his chances. From being stuck in a dilemma around de Villiers’ retirement to not picking the emerging de Villiers, South Africa have come a long way.

Which seam-bowling all-rounder to pick

To add to these headaches, South Africa have three options for the slot of seam-bowling all-rounder. Dwaine Pretorius is the frontrunner, having shown his expertise with both bat and ball. But against England, Andile Phehlukwayo exhibited incredible calm under various pressure situations. Though, he is yet to do something of note with the bat that reduces his chances.

The third option is Wayne Parnell who has the advantage of being a left-armer. Like Rossouw, Parnell returned to the South Africa set-up after five years, featuring against India. He bowled 12 overs for two wickets but an economy rate of 7.3 will keep him in contention.

After a promising start to his international cricket journey, Lungi Ngidi tapered off in the last couple of years. His slower ones traveled the distance as the Durban-born pacer became expensive - 10.5 runs per over in 2020 and 9 per over in 2021. 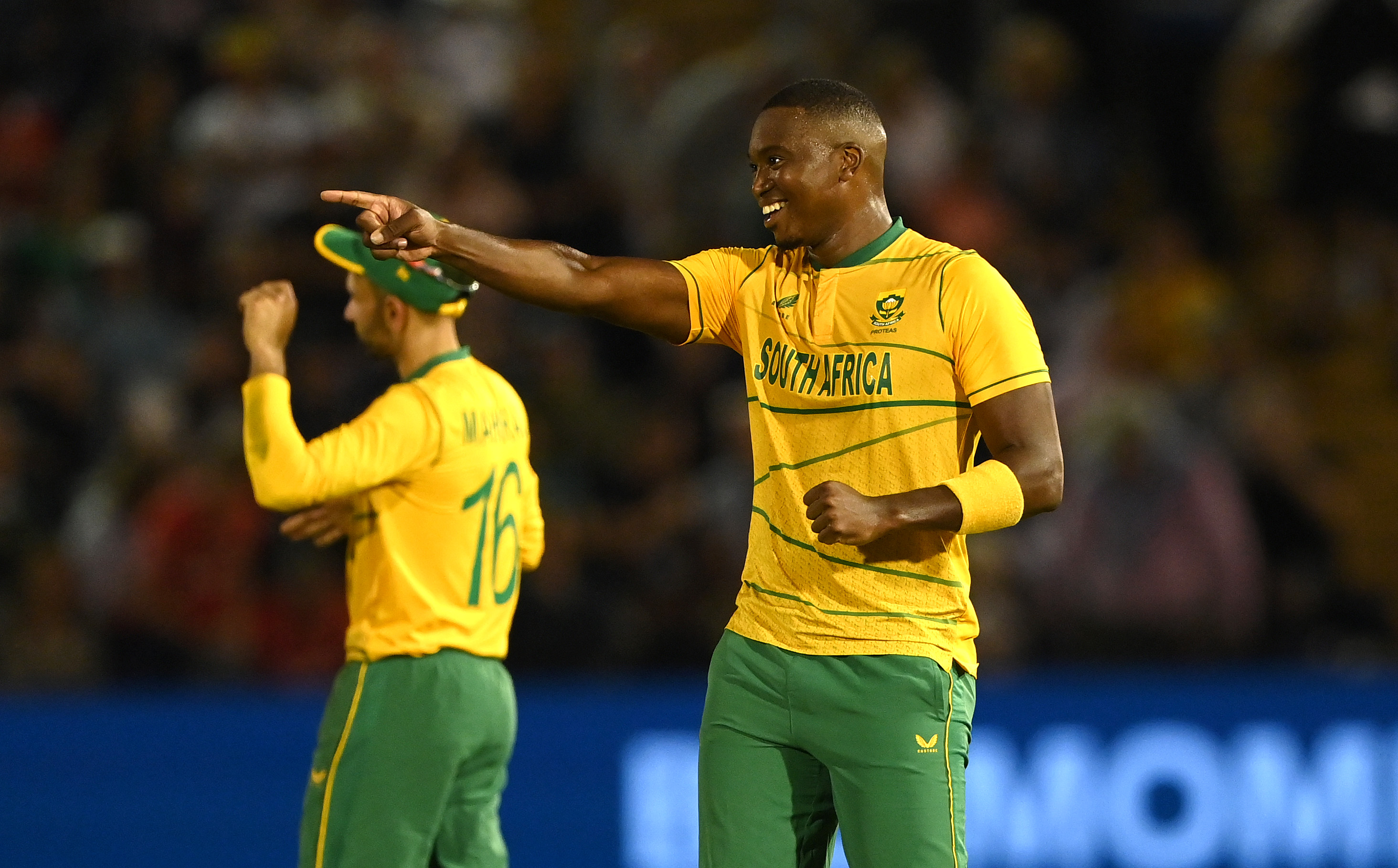 However, in five T20Is this year, Ngidi has appeared to be back to his best. He has bowled only in the powerplay and in the death overs, yet he has conceded at only 6.5 runs per over. To add to it, he has snapped 11 wickets in these five games. It has been a timely comeback from Ngidi.

In the World Cup, if South Africa choose to field four pacers in the XI, they have Kagiso Rabada, Anrich Nortje, Ngidi and one of the three seam-bowling all-round options. If it comes down to picking three of them, then it will be another headache to choose two between Rabada, Nortje and Ngidi.

Maharaj, or Shamsi, or both?

It is an exciting time for South Africa’s spin resources. For the first time in what feels like an eternity, they don’t just have a formidable spin bowler but a formidable spin bowling duo. Tabraiz Shamsi has scripted many wins for the Saffers with his left-arm wrist spin. On the other hand, Keshav Maharaj is the perfect foil with his economical finger spin, most of which he has done during the powerplay. 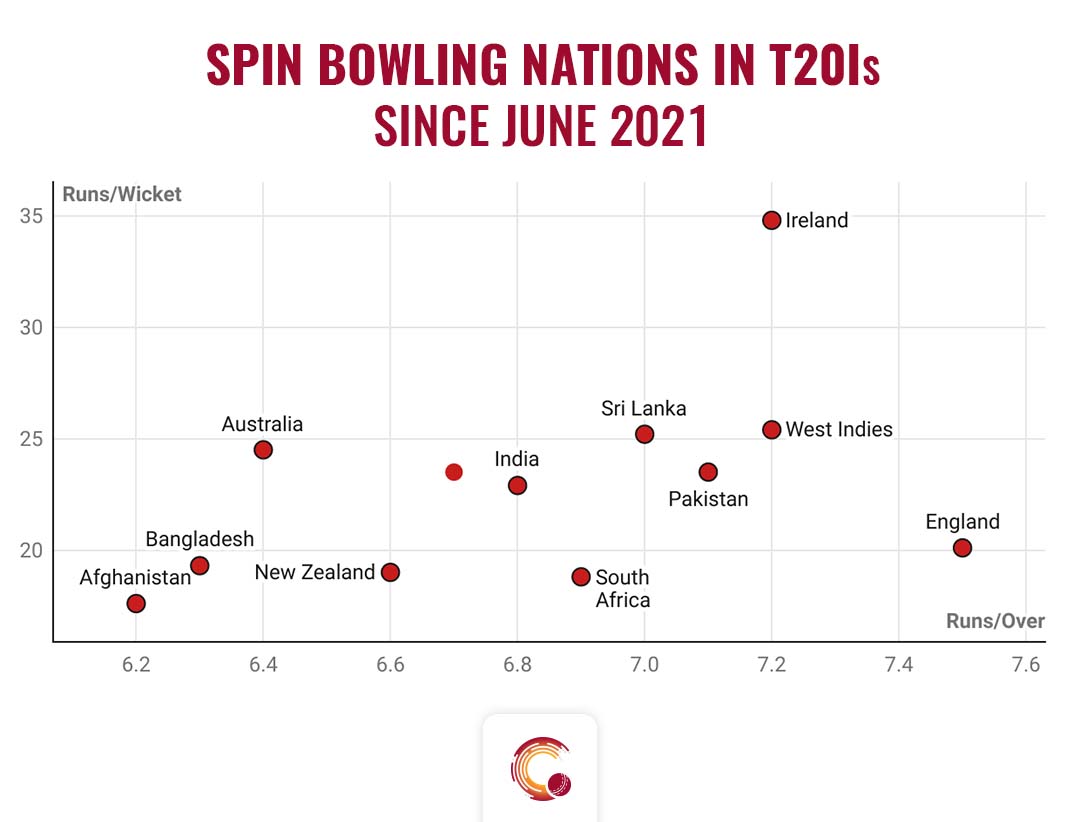 Their presence has given South Africa bowling a complete outlook. However, with the T20 World Cup in Australia, they may have to pick one between the two which will be another head-spinning decision to make.

At the time of writing this, South Africa have played only seven T20Is since the last World Cup, the joint least alongside Pakistan among Test playing nations. They have only two more T20Is left before picking their squad for the World Cup Down Under. Unlike other nations, South Africa have a convenient problem of holding plenty of cards up their sleeves in nearly every department.

They have featured in the last few ICC events as the underdogs. Now, they are hot favorites again with the World Cup less than three months away.

The turnaround is what you appreciate the most.