Spinners and Dhoni hand Delhi a thumping defeat by 80 runs

Spinners and Dhoni hand Delhi a thumping defeat by 80 runs

Spinners and Dhoni hand CSK a thumping victory over the table toppers, Delhi capitals by 80 runs. It turned out to be Delhi’s third worst margin of defeat against the yellow brigade. In the end Delhi could only manage 99, their lowest total this season. CSK spinners have now taken 48 wickets in this season the highest among all teams.

The powerplay man, Chahar got in the action straightaway getting rid of Prithvi Shaw off the fifth ball of his first over. Iyer, started off positively with Dhawan at the other end who has been a revelation in this IPL. Both added 55 for the 2nd wicket before Dhawan got out to another off spinner, Harbhajan while trying to play a sweep shot. In IPL, Dhawan has an S/R of 112 against off spinners, his worst among all bowling technique.

As soon as the fielding restrictions were over, Dhoni deployed his best spinner Tahir in the mid phase and he turned the match in a space of 10 balls which included the wickets of Axar and Rutherford in same over. Tahir has now taken 20 wickets in the mid phase, the highest among all leg spinners across all IPL seasons.

It was all about surviving and playing the 20 overs from then but Jadeja had other ideas, he removed Morris and Iyer in space of 2 balls on the back of some brilliance by Dhoni behind the stumps.

Delhi capitulated from 59 for 2 to 85 for 8 in a space of six overs and from then it was only about playing the remaining overs to salvage some pride.

A sluggish pitch and a lacklustre start from the CSK openers saw them score just 4 runs in the first four overs with the cost of losing Watson. After playing eight dot balls Watson was feeling the pressure and got out while playing a pull shot off Suchith.

Rabada’s replacement, Boult bowled in tight channels and gave nothing away. He was getting some movement off the pitch therefore the openers thought of negating his threat by seeing off the new ball and not taking unnecessary risks.

The incoming batsmen, Raina played some shots and took the score to 27 after the end of the powerplay. CSK generally have gone slow in the powerplay scoring at 6.07 RPO, the lowest among all teams.

Both Raina and Du Plessis strung a partnership, with Raina being the aggressor among the two. Du Plessis was struggling with his timing and was playing with an S/R of less than 100. Only 8 overs were left in the game when Du Plessis decided to shift gears. He hit Suchith for a six to give some momentum to his rather slow paced innings but got out immediately trying to repeat it giving Suchith his second wicket of the match. Suchith had a good game after he gave 28 runs in his allotted four overs and took two crucial wickets.

Raina soon followed to the dressing room but not before he scored a calm and composed innings of 59 of 37 balls. The 85 partnership between Du Plessis and Raina gave the platform for someone like Jadeja and Dhoni to come and finish the innings. Dhoni decided to drop Rayudu and Jadhav down the order given their S/R this season has not been impressive. Instead he promoted Jadeja up the order.

The Saurashtra all-rounder’s 10 ball 25 gave some impetus to the innings which allowed Dhoni to settle himself. 53 came of the last three overs thanks to Dhoni who ensured that CSK not just end past 150 mark but go way beyond that. In the final over, Dhoni smacked Boult, the most economical bowler till then for 21 runs and helped CSK post 179/4. 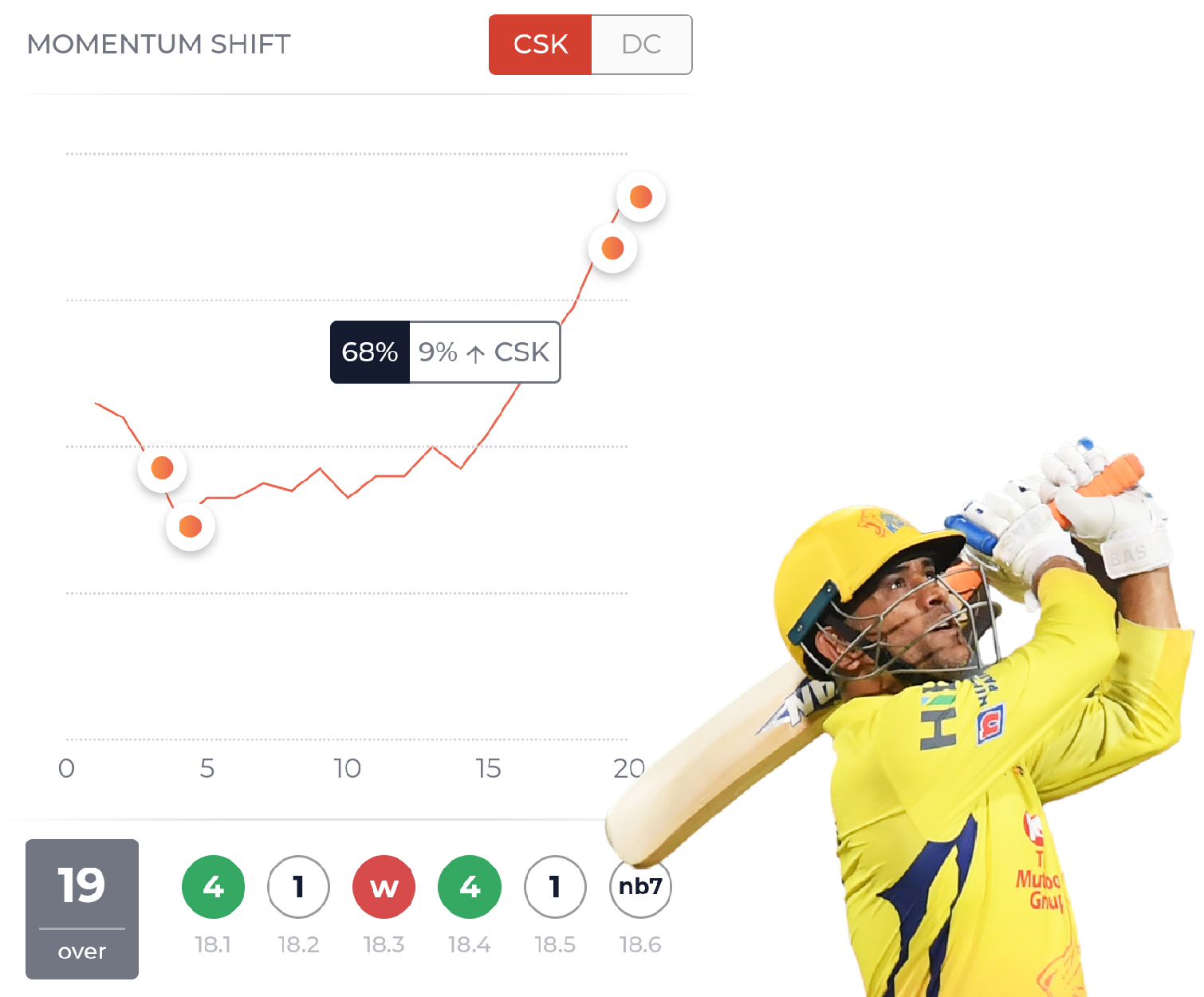 After Delhi lost the wicket of Pant in the seventh over the chased looked dicey and the matter became worse when Tahir removed Axar and Rutherford in the same over. Delhi winning chances took a huge dip by 11 % and from then they never managed to claw back into the game. 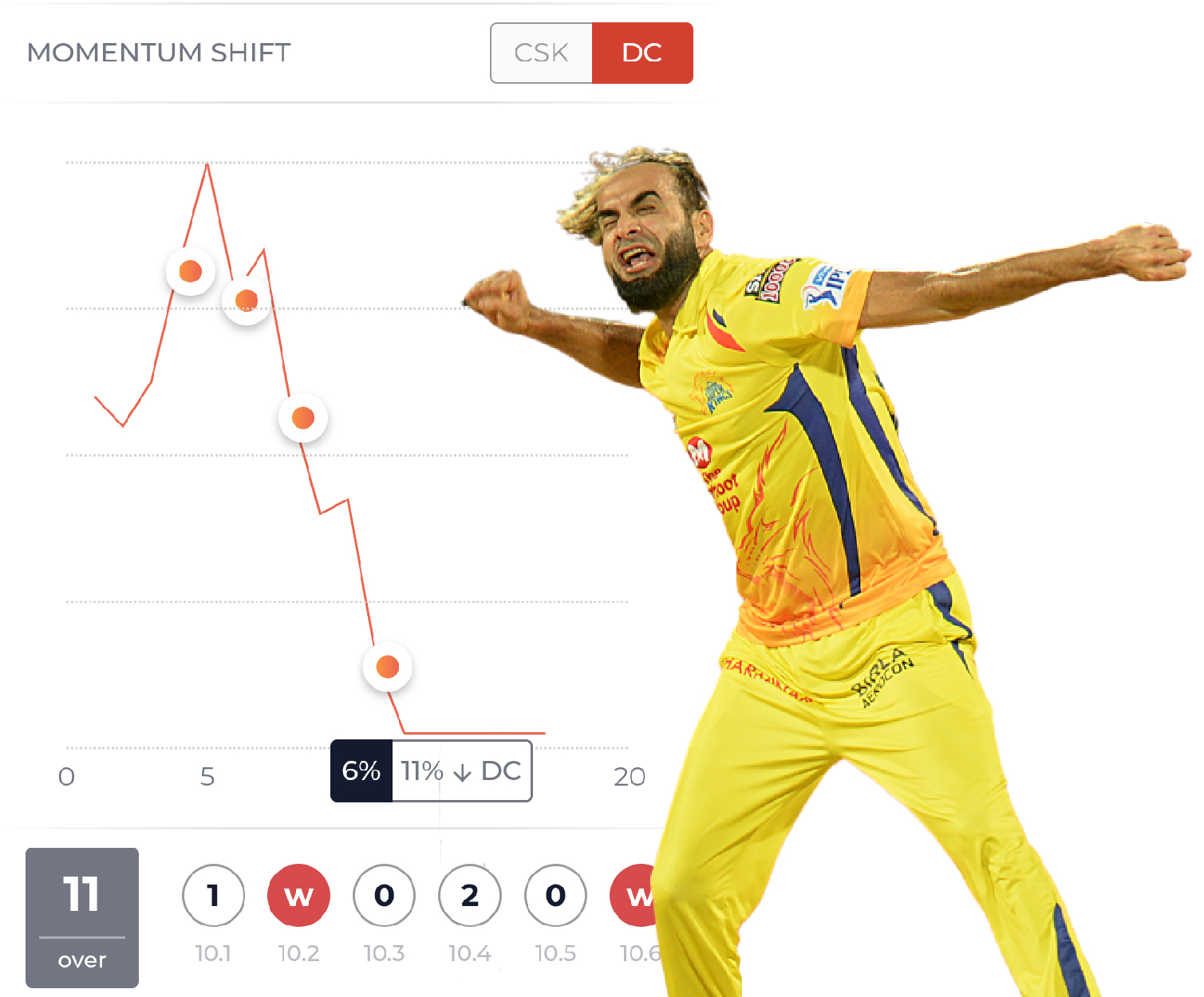