MI hand CSK their first defeat of IPL 2019 at Chepauk

MI hand CSK their first defeat of IPL 2019 at Chepauk

MI become the first team to complete the double over CSK this season.

With a golden chance to perhaps be the only team to complete a double over Chennai Super Kings (CSK), Mumbai Indians (MI) skipper Rohit Sharma got back into form, striking his first fifty in 17 Indian Premier League (IPL) innings. Evin Lewis playing his first game of the season did not time the ball particularly well, but made a fighting 30-ball 32 and more importantly put on 75 for the second wicket with Rohit after the early dismissal of Quinton de Kock (15). The experiment of sending Krunal Pandya at No. 4 failed, but his brother Hardik (23) and Kieron Pollard (12) smashed MI to a respectable total in the end. MI put on 50 in the final five overs, including 17 of the final over, which added a spring in their stride at the break.

Chepauk has been a mixed back this season. Earlier this season, teams struggled to get to even 120, but the pitch seems to have eased up as the season has progressed, helping teams to reach totals of 150 to 160. We saw 176 chased down by CSK in the previous match, but in this match, they missed the Midas touch of MS Dhoni. The slow balls to did the trick on a couple of occasions – first when de Kock top-edged one off Deepak Chahar and then later on in the match when Dwayne Bravo was through his shot off the bowling of Lasith Malinga.

Mitchell Santner bowled exceptionally well and picked up the wickets of Lewis and Rohit at crucial junctures, giving away just 13 runs from his four overs. The MI batsmen were able to attack just 33% of their deliveries and induced 29.1% false shots. In matches where he has bowled four overs, only once has he conceded lesser runs.

You would have backed CSK to chase 156 today, but they were without Faf du Plessis and also their talisman, MS Dhoni, who on his day, could make any chase look minuscule. The return to form of Shane Watson in the previous game would have been a relief for CSK, but the fact that Suresh Raina and Ambati Rayudu have been largely inconsistent this season would have surely bothered the hosts. The top three fell like nine pins and soon found themselves in trouble at 60 for 5 after 10 overs, needing 96 more from the next 10. Murali Vijay, playing his first game of the season was their only hope, apart from Dwayne Bravo and Santner.

But after Suryakumar Yadav’s sharp catch got rid of Vijay, things were looking slim for CSK, who until today, looked unbeatable at home.

After Hardik and Lasith Malinga earlier removed Raina and Watson respectively, Krunal created shockwaves by removing Rayudu and Kedar Jadhav in quick succession to hand MI a clear advantage. The depth in their batting sans MS Dhoni added little value as CSK huffed and puffed their way to a paltry 109, handing MI a 46-run win which allows them to complete a double over their biggest rivals.

When MI scored 14 runs off the 9th over from Imran Tahir, their win % went up by 8 and stood at 69% which was their highest in the entire innings. However, Santner pulled things back for CSK and then in the end, Pollard and Hardik gave them a fighting chance in the end. 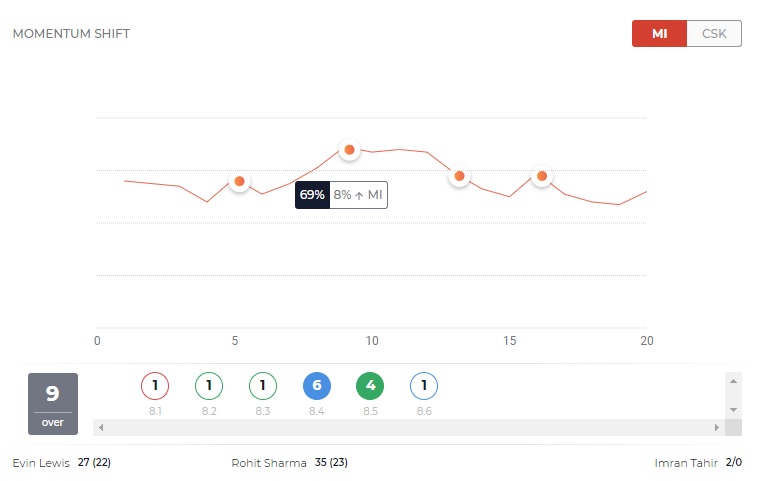 Krunal put MI in a commanding position when he removed Jadhav in the fifth over and gave away just one run. CSK’s win % declined by 14, which was their highest dip in the entire innings. CSK’s win % did not take an upward curve at any point after that. 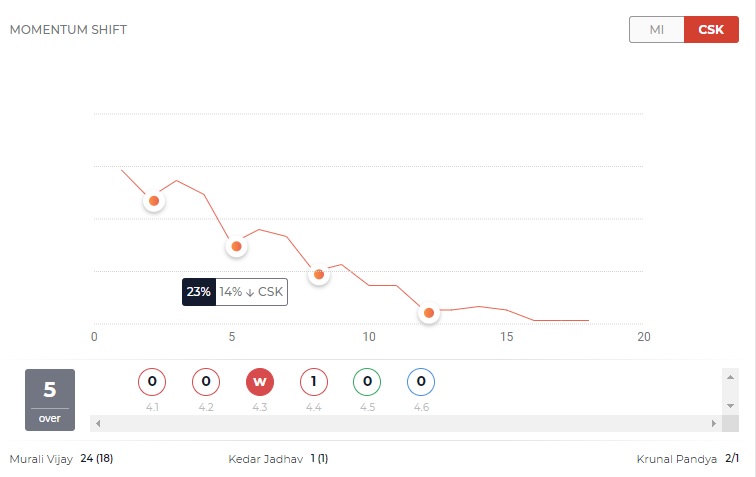