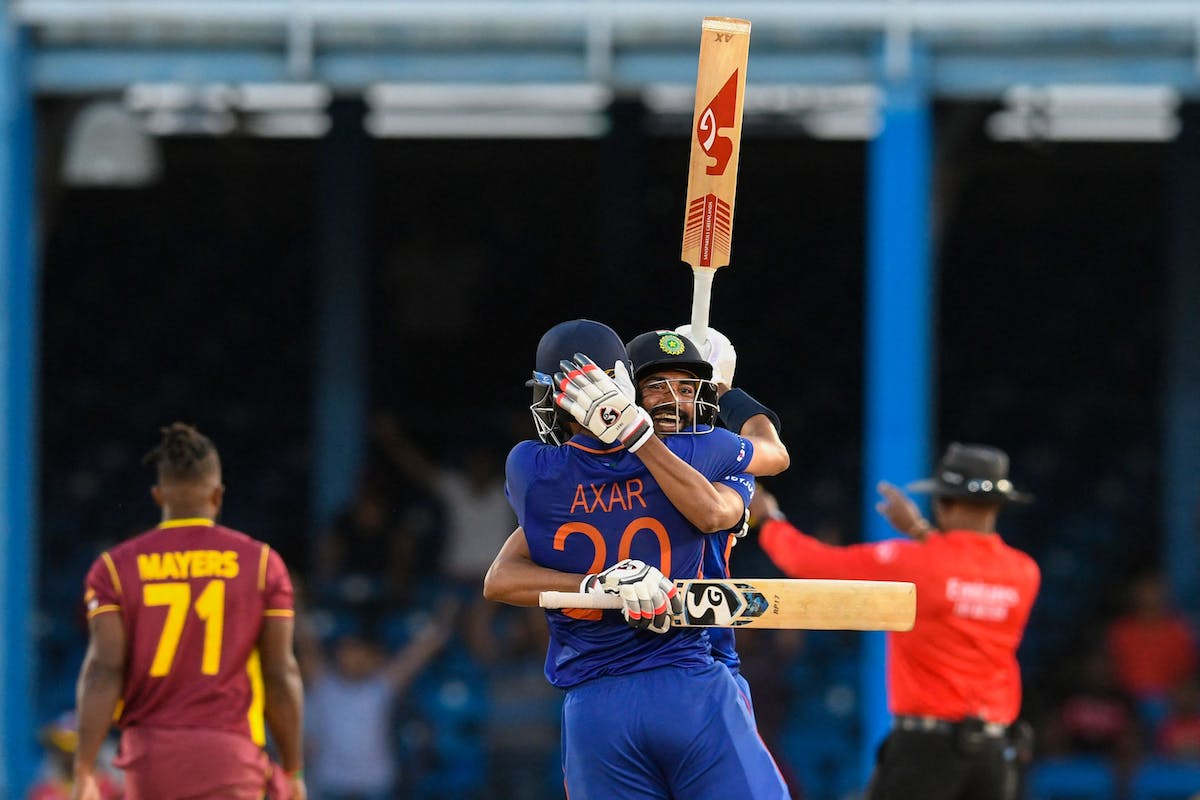 It was the late cameo from Axar Patel that helped India seal the series in the second ODI. This was India’s eighth consecutive win against West Indies in this format and more importantly, the 12th consecutive series win. This is the most by a team against an opponent. As for West Indies, they are still in search of their first win under Nicholas Pooran’s captaincy at home:

India were in deep waters when Axar came into bat. The required run rate was over 9.5 with just five wickets in hand and 100+ runs. He forged a quickfire partnership of 51 alongside Deepak Hooda for the sixth wicket, but Axar was the aggressor in this. 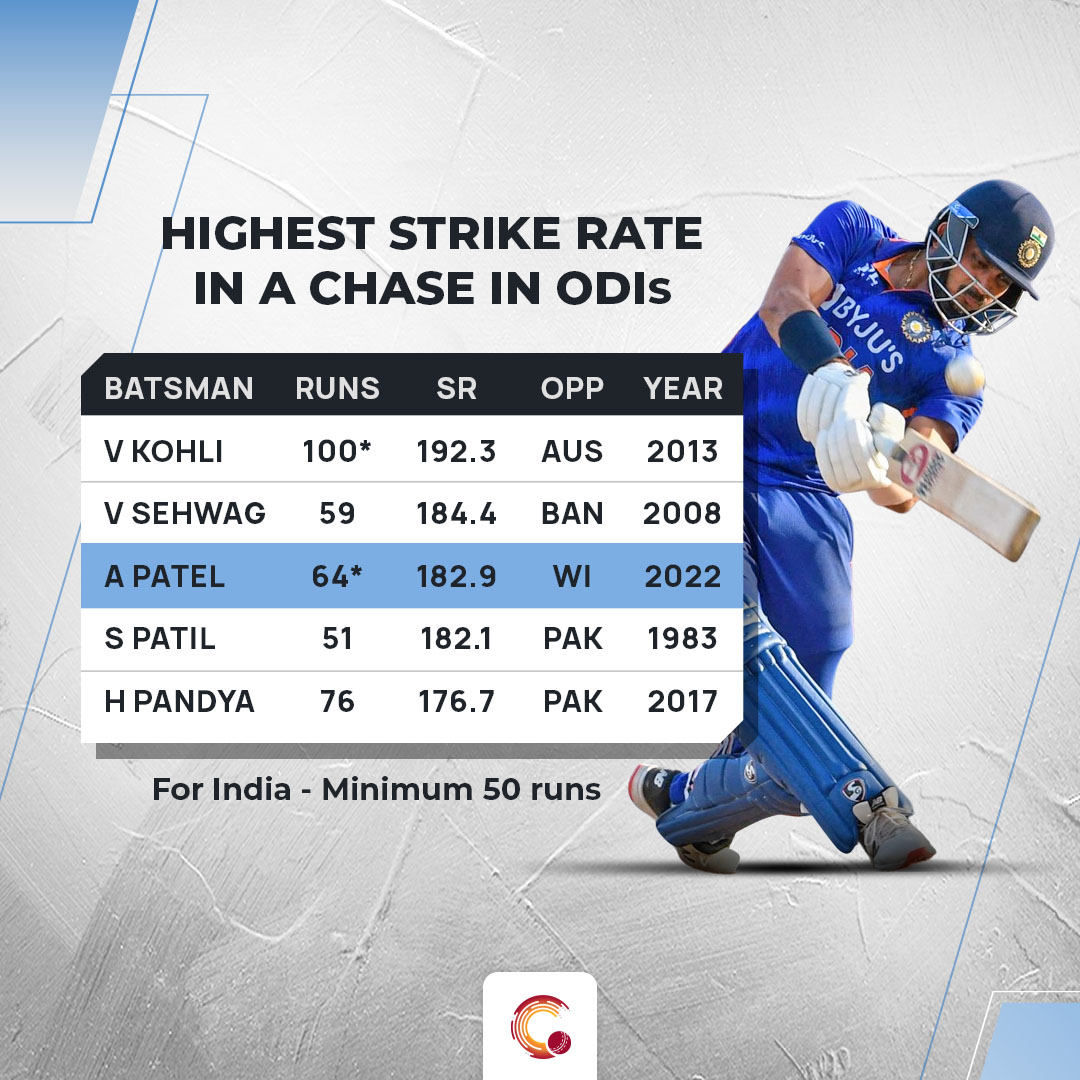 In the end, Axar scored an unbeaten 64 of 35 balls to steer India to a fantastic win. His strike rate of 182.9 in this chase was the third highest for an Indian batsman who had scored 50+ while chasing. Also, the five sixes hit by him in this innings, is the most by a sixth or lower order Indian batter in a successful chase.

After setting a target of 312 for India, West Indies were in the driver’s seat till the 40th over. But, Axar stole the show and helped India chase the target.

In ODIs in the West Indies, only twice has there been higher targets chased. England in 2019 had chased 361 and Sri Lanka chased 313 in 2003, both against West Indies in Bridgetown. 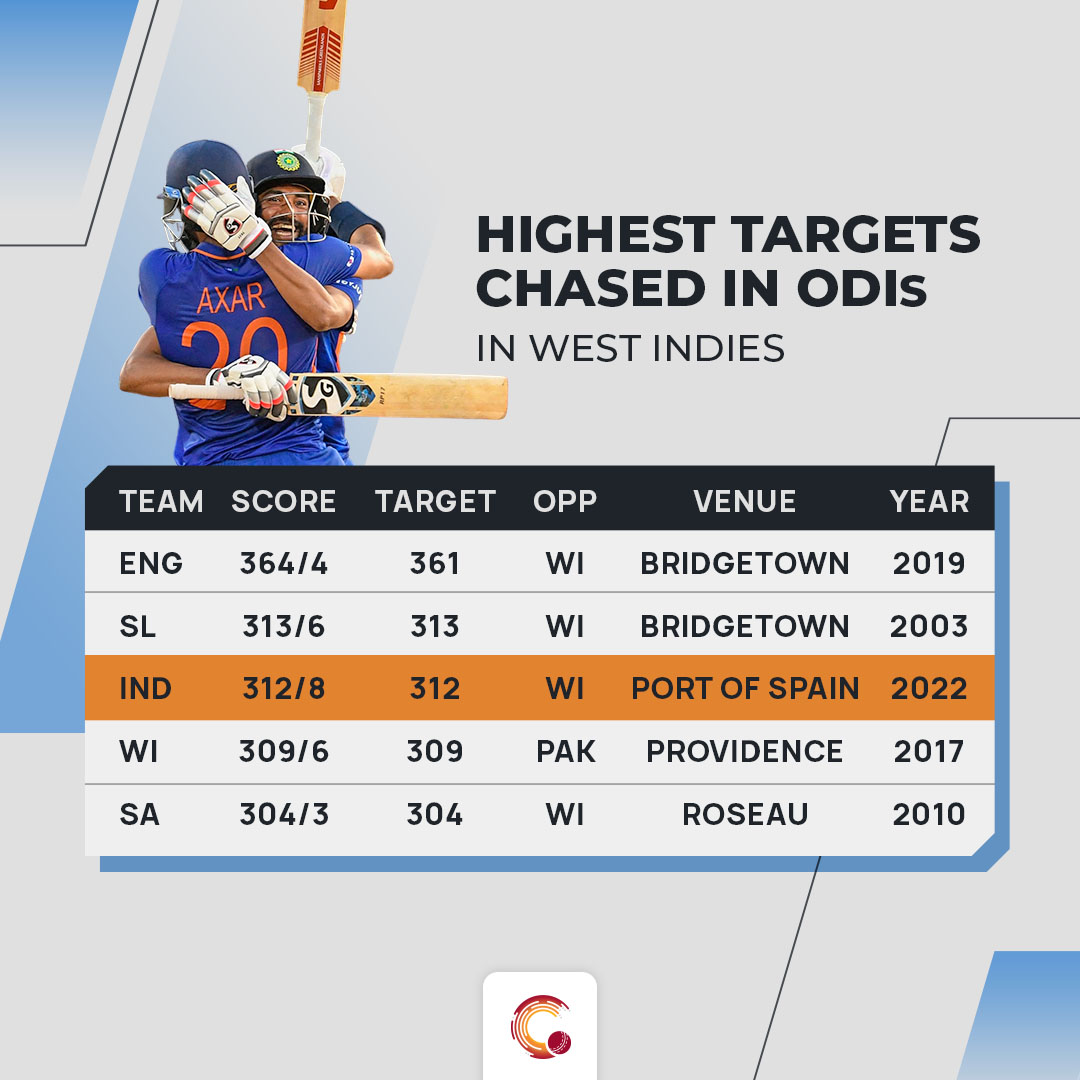 Interestingly, this was the fourth innings in which a 300+ total was scored in this series. In a bilateral series, only in England’s tour in 2019, there were four totals of 300+ in a single series.

Sanju Samson was looking good and well set for a 54, before he was run out in the 39th over. A huge responsibility was on Hooda and Axar, the last of the recognized batters.

All went well for Hope in his 100th, apart from the result

It was a memorable 100th match for Shai Hope till the 90th over of the match. In his innings of 115, Hope registered some great records and an unwanted record:

-In ODIs, Hope became the 10th batsman and the fourth West Indian batter to score a century in their 100th match. The last batsman to achieve this feat was Shikhar Dhawan in 2019. 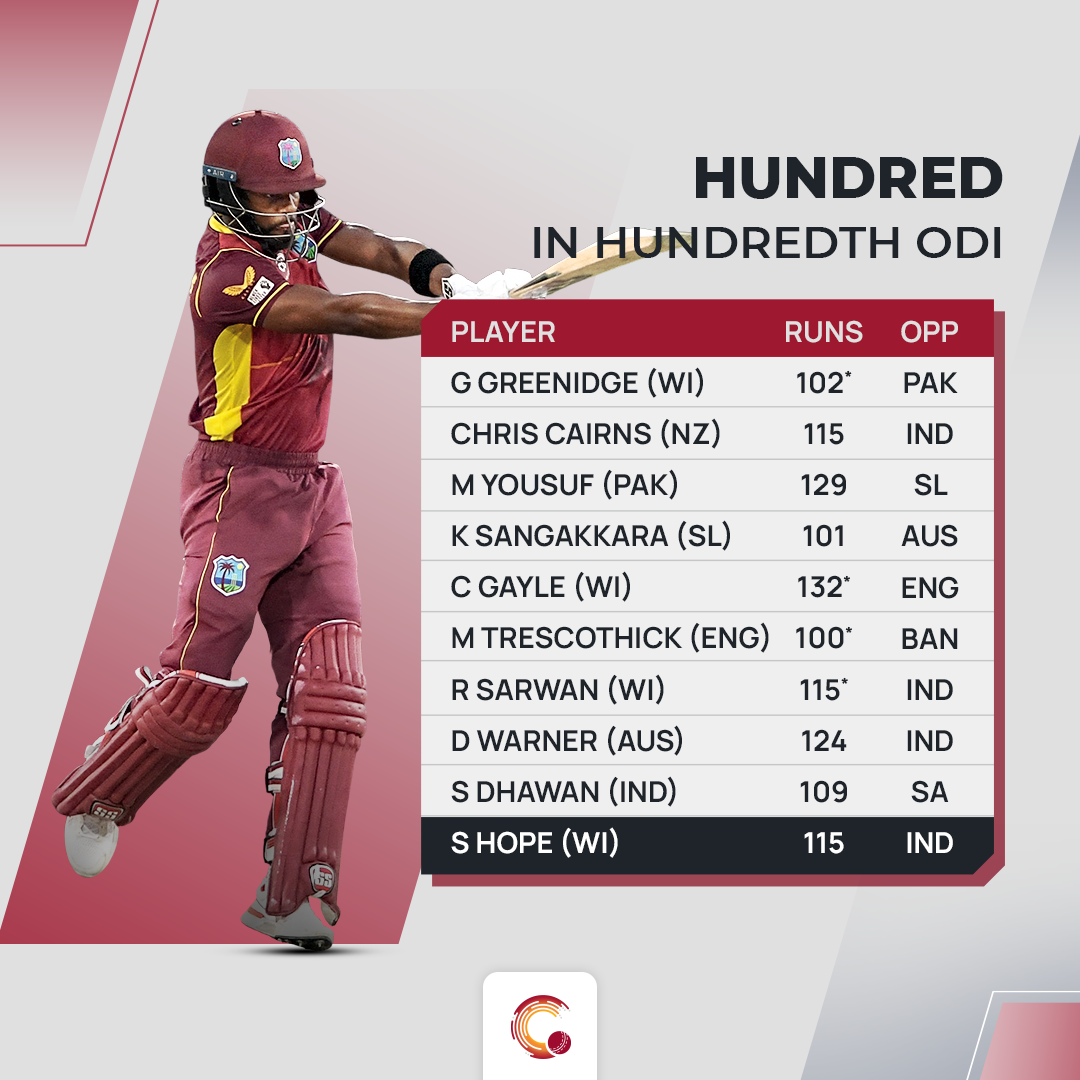 -This was Hope’s third century against India in this format. Among West Indian batters, only Chris Gayle has more centuries against India (4). Three other batters, Marlon Samuels, Gordon Greenidge and Sir Viv Richards, share three. 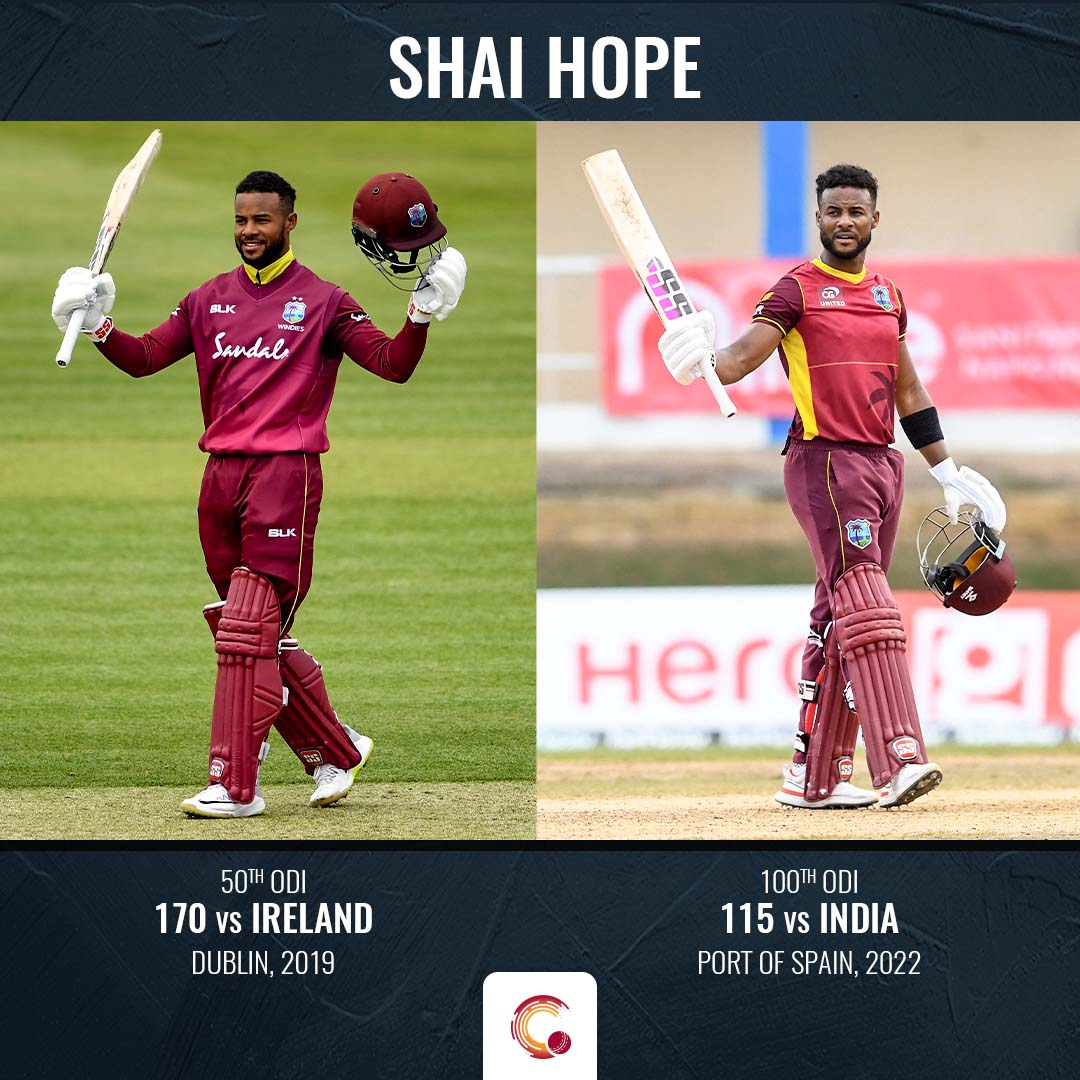 -As the results didn’t go West Indies way, this century was the fifth by Hope that came in a losing cause. Only Gayle has more centuries in losses among West Indies batters (11).

Needing 100 runs to win in the last 10 overs, India chased it down with two wickets and two balls remaining. In ODIs, prior to this match, the most runs scored by India in the last 10 overs of chase, irrespective of result, was against Zimbabwe (91) in the 2015 ODI World Cup. 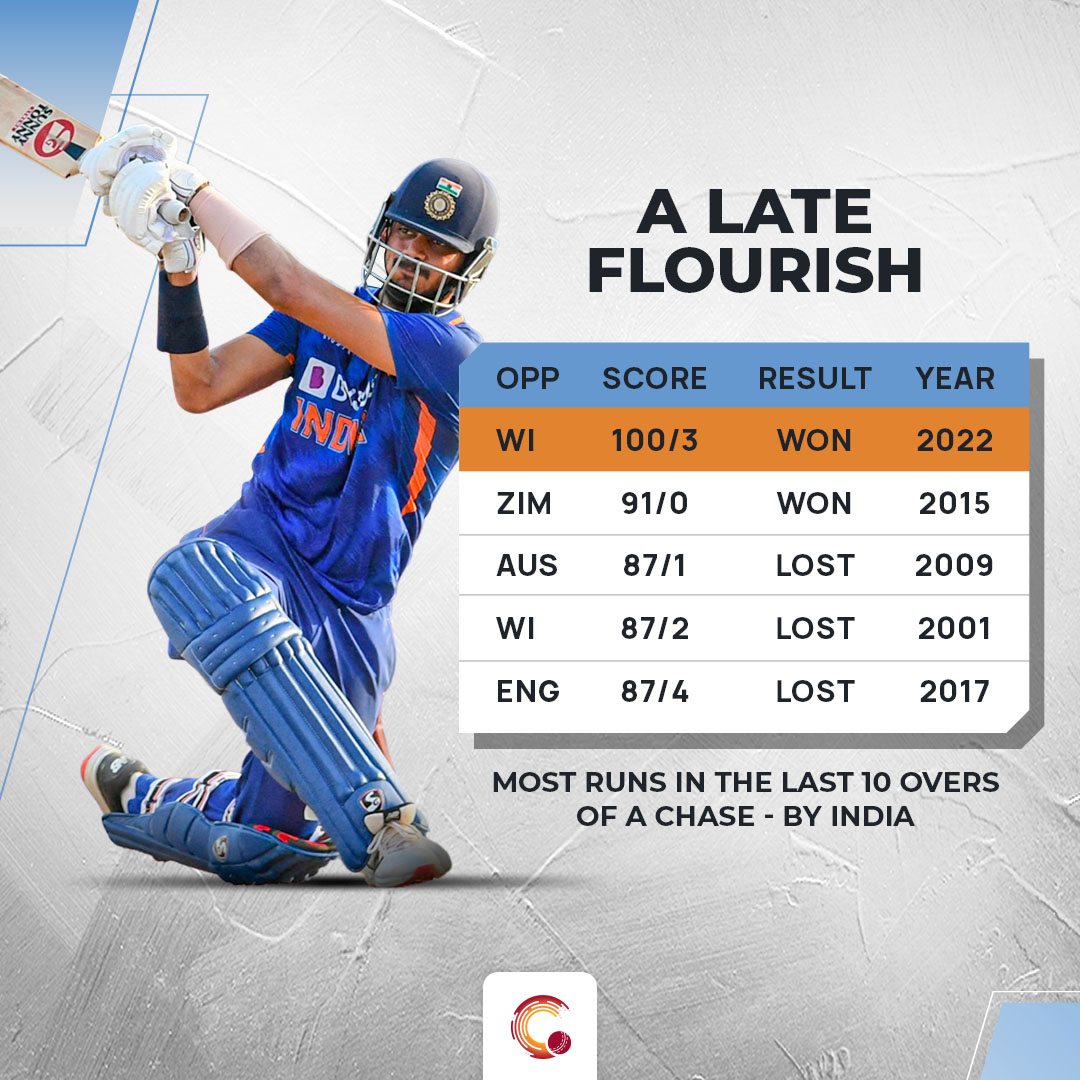 Not the ideal start

Impressive runs in T20Is and IPL’s, saw Avesh Khan being rewarded with a debut ODI cap. Unfortunately, it turned out to be the least impressive debut. 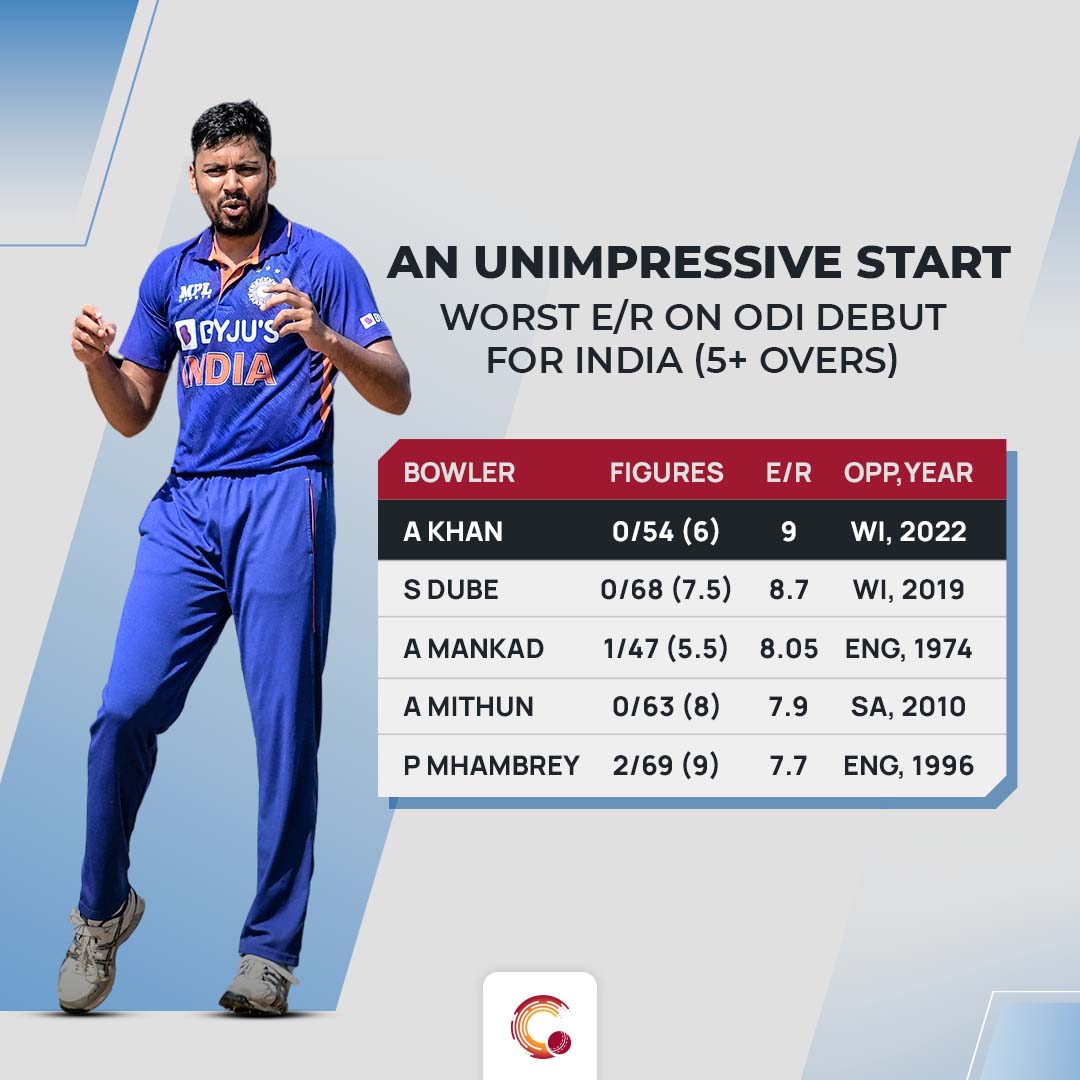 In his first spell itself, Avesh was all over the place and conceded 36 runs in his first three overs. Later on, he failed to contain runs in his other spells as well. Eventually, Avesh bowled only six overs and conceded at an economy of 9.0, which is the worst for an Indian bowler with five-plus overs on debut.

He might have had some unresolved issues against the short ball that troubled him in the England tour. But, against West Indies, despite their pacers' attempt to bounce him out, his form against them was intact.

In eight innings against them, Shreyas has had seven 50+ scores and averages 57.9. In the first 10 matches against West Indies, no batter has had seven or more 50+ scores, apart from Shreyas.