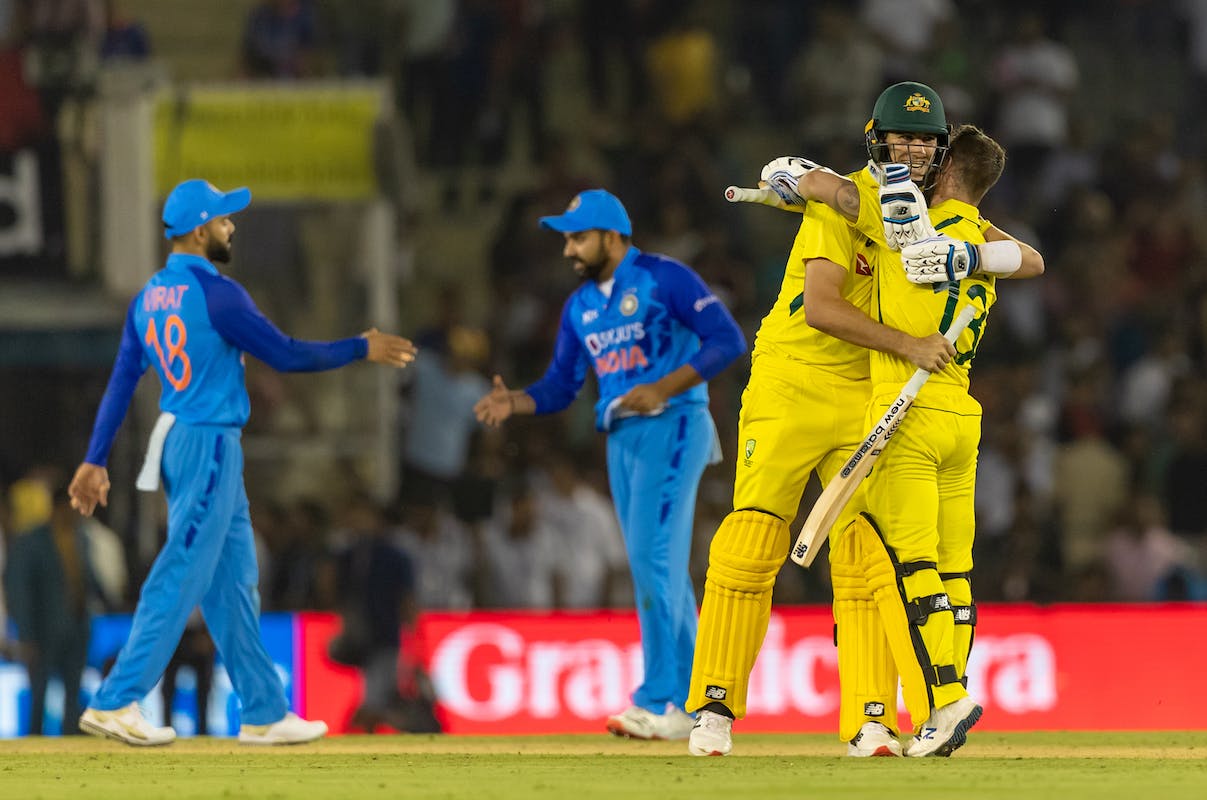 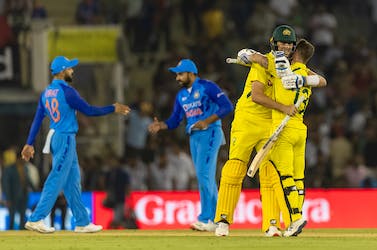 But, Australia chased the massive target with ease. Cameron Green, opening for the first time in T20s, set the tone with a 30-ball 61. Matthew Wade, lower down the order, finished it off with an unbeaten knock of 45 from 21 balls to guide Australia one up in the three-match series.

The pitch in Mohali was a belter to bat, and that is one of the reasons why both sides managed to score 200+ runs. In the end, it was Australia who was the better team.

In T20Is, Australia have chased a target of 200+ only thrice, including today. Their highest-ever chase came against New Zealand in 2018. Coincidentally, this is also the highest chase by any team in T20Is. In this match, they successfully chased 209, their second-best target. 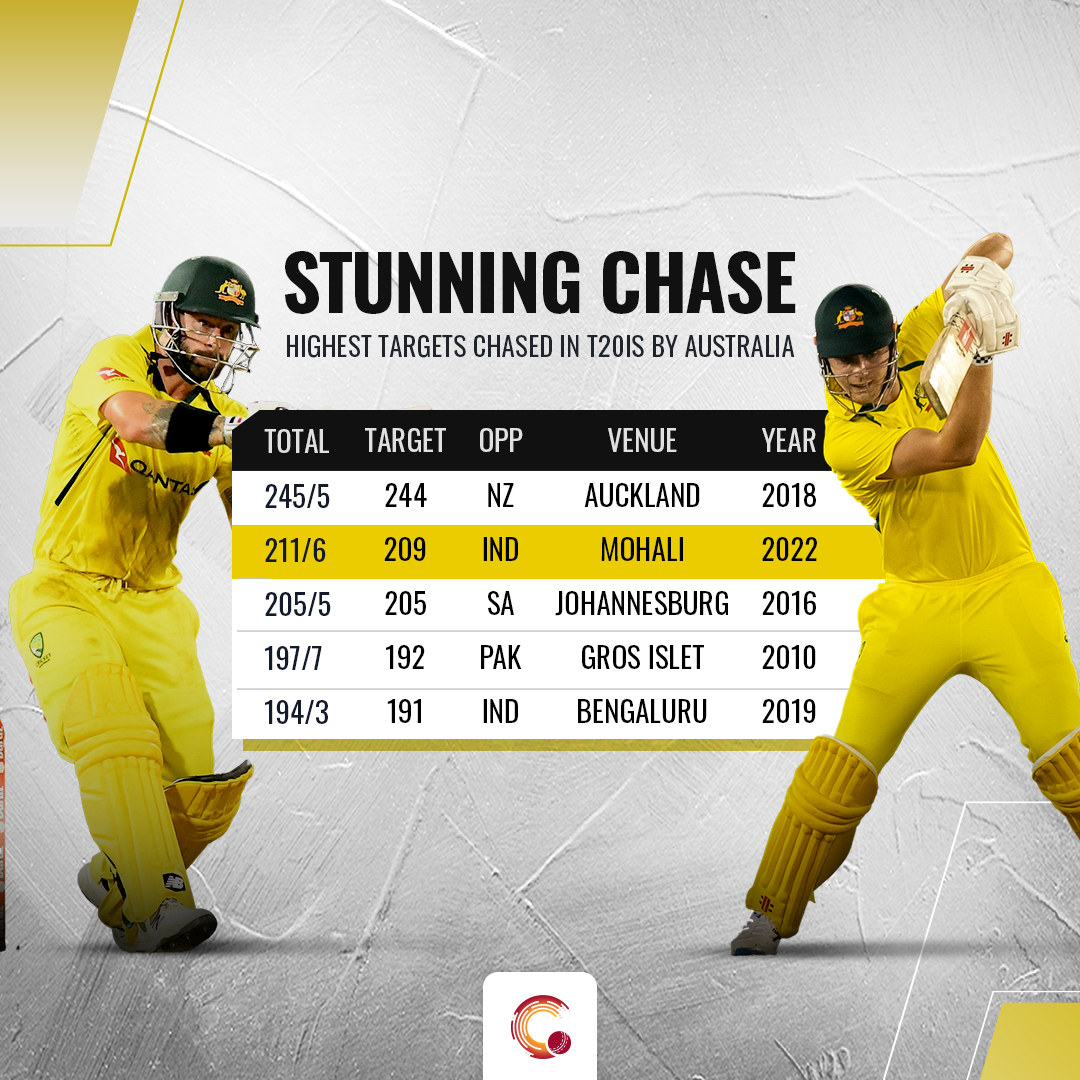 Playing just his second T20I, Green was asked to bat as an opener for the first time in his T20 career. But what came later was completely unexpected by India.

He started off his innings with four consecutive boundaries off Umesh Yadav. He then continued with his power hitting and registered a half-century off just 26 balls. Before being dismissed, Green had scored 61 runs at a strike rate of 203.3. Among Australian batters who have scored a 50+score against India, only Glenn Maxwell, in his knock of unbeaten 113 in 2019, had a better strike rate (205.45).

Wade finishes it off in style 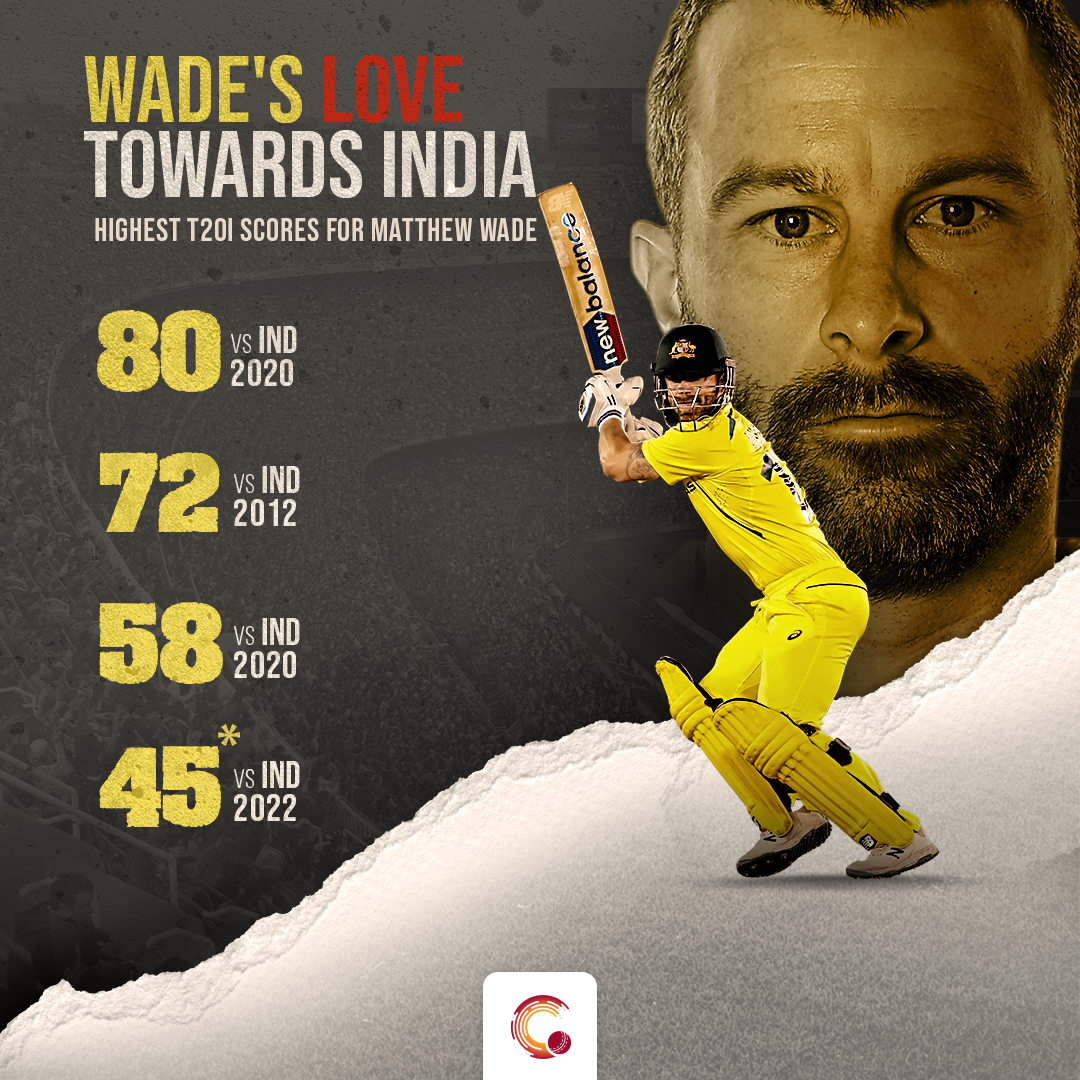 Wade alongside Tim David forged a match-winning partnership of 62 from 30 balls for the sixth wicket. David was a mere spectator in the partnership as Wade scored the bulk of the runs. His unbeaten knock of 45 is his fourth-best score in T20Is. Interestingly, all his top four best scores have come against India.

The misery of Indian pacers

Heading into the World Cup later in October, India have found a new headache. Their pacers haven’t been up to the mark in the absence of Jasprit Bumrah. This match was another example of it.

Though it was a good pitch to bat on, a target of 209 is definitely defendable. But, all combined, they picked up only two wickets and mainly conceded at an economy of 12.5 runs per over. In a T20I innings where they have bowled 10+ overs, only against West Indies in 2016, they had conceded at 13.1 runs per over. 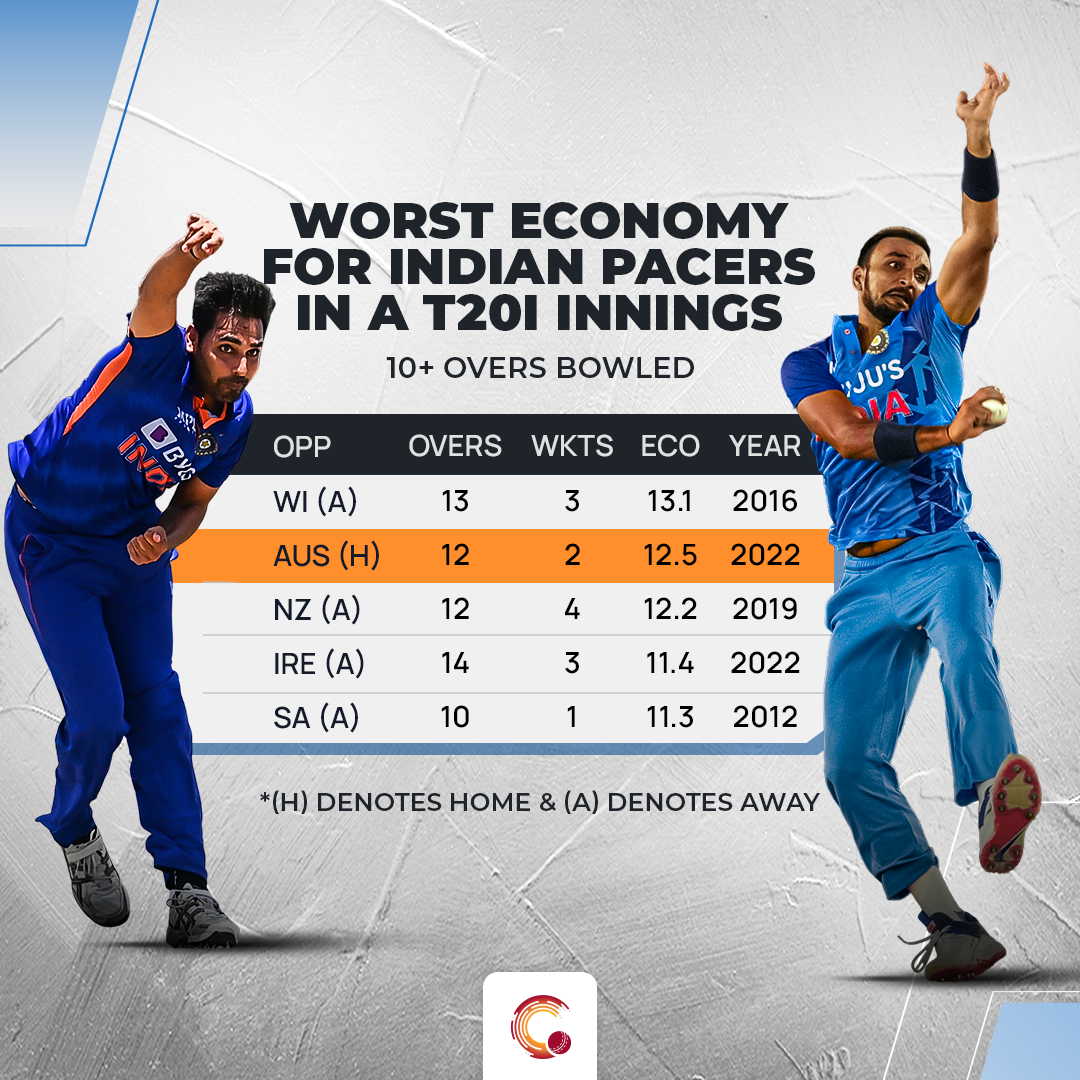 To add more, in the year 2022, this is the fourth time Indian pacers have conceded at an economy of more than 10 runs per over (10+ overs). In no other calendar year they had suffered this fate more than twice.

Few other stats from the match:

-In T20Is, this is the first time five different Indian bowlers have conceded 10 runs/over in an innings after bowling two overs each.

-The 52 runs conceded by Bhuvneshwar Kumar in this match is his worst spell in T20Is. Before this match, the most runs he had conceded was 47 against New Zealand in 2019.

-In T20Is, India is the second full member nation after South Africa in 2016 to lose two matches defending a 200+ target in a calendar year.

-KL Rahul registered 2000 T20I runs in just 58 innings. Overall, he is the fourth batter to reach the landmark within 60 innings. Among Indians, he is the second quickest after Virat Kohli (56). 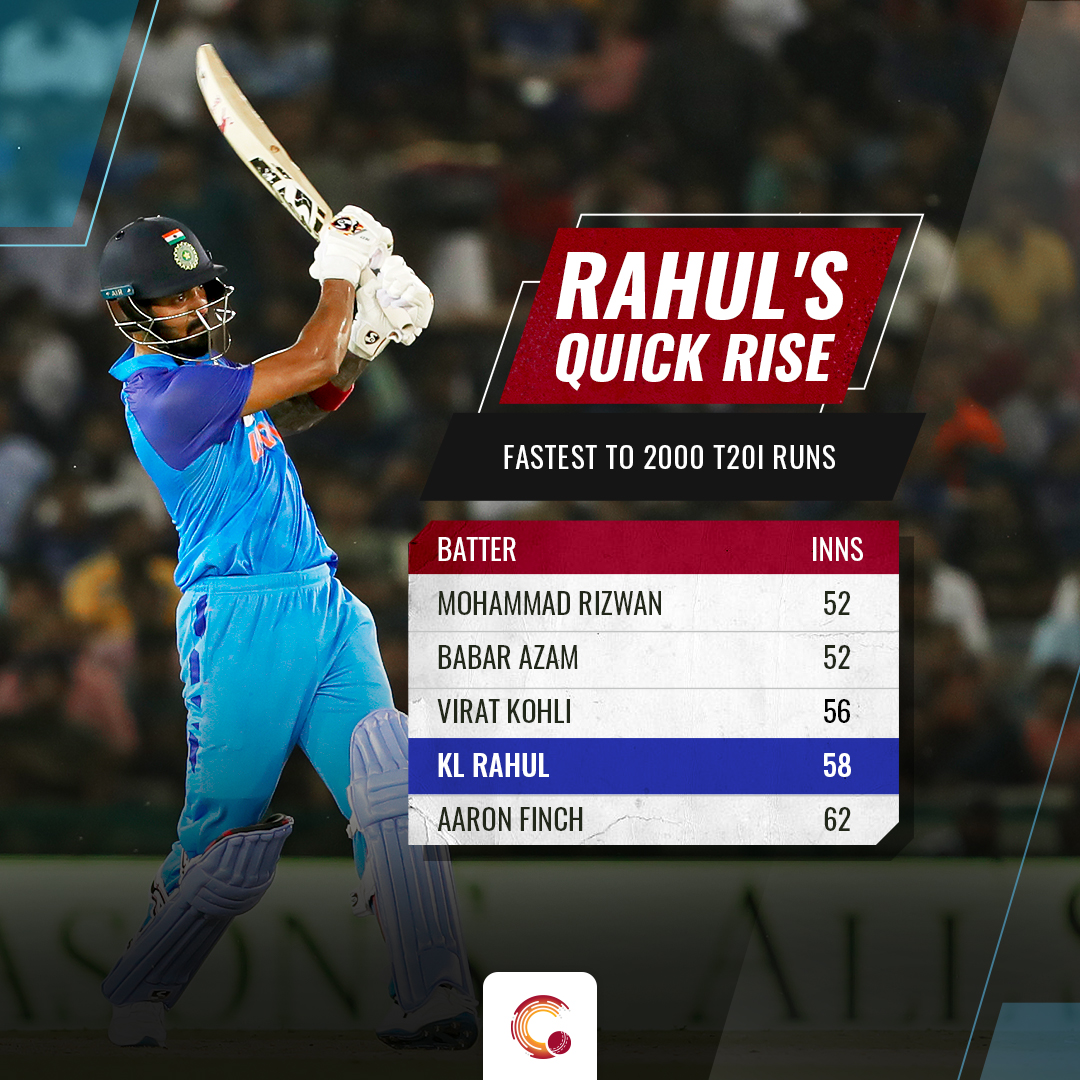 -Pat Cummins, in this innings, conceded 47 runs in his four overs, which is the most he has conceded in an innings.