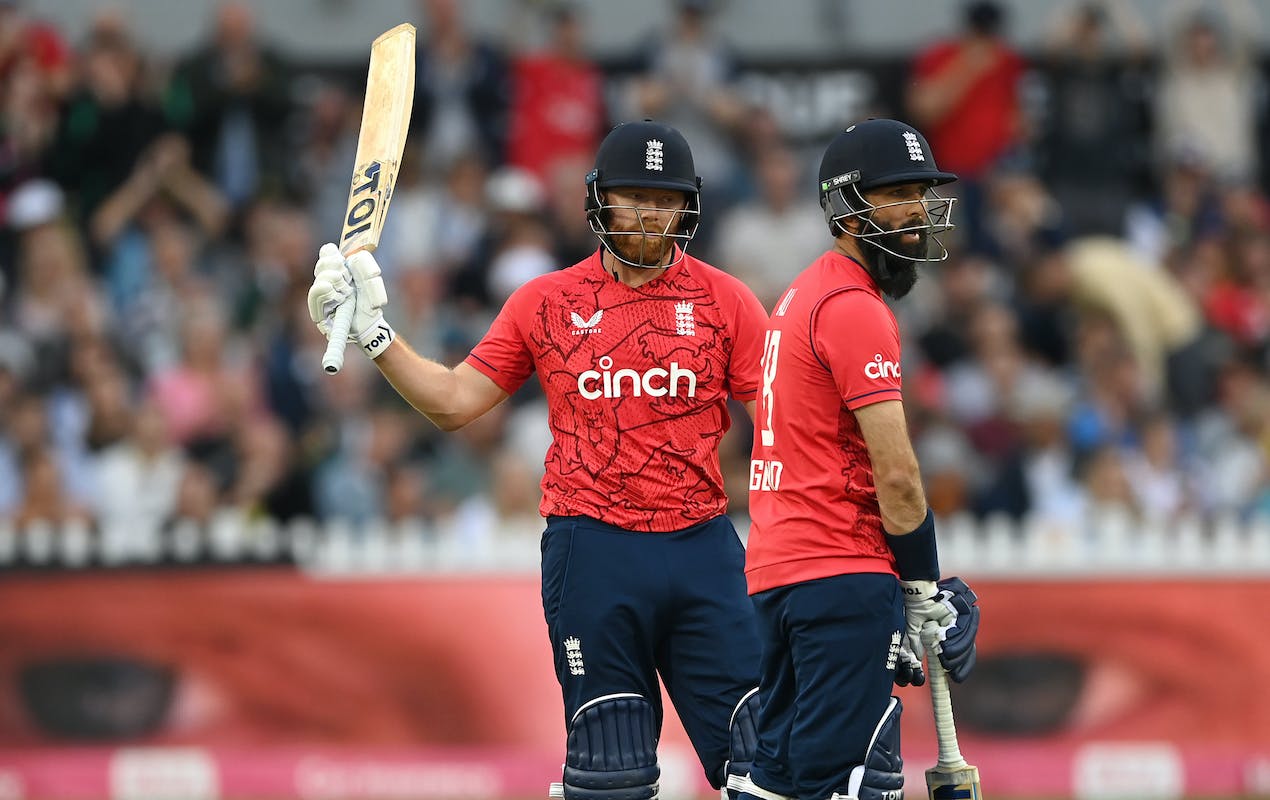 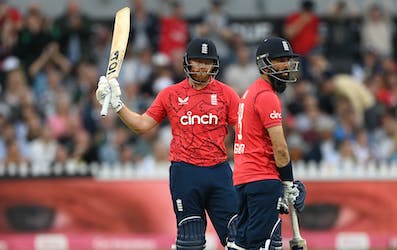 A crackerjack of a start to the three match T20I series between England and South Africa. Jonny Bairstow continued his summer form and Reece Topley was at his usual best. But, Moeen Ali and Tristan Stubbs stole the show. However, it was the three-run 17th over by Chris Jordan that tilted the game towards England:

One among the cleanest hitters of the cricket ball, showcased his brutal power. Coming into bat at the score 112 in the 12th over, Moeen’s 18-ball 52, powered England to a mammoth total of 234/6. 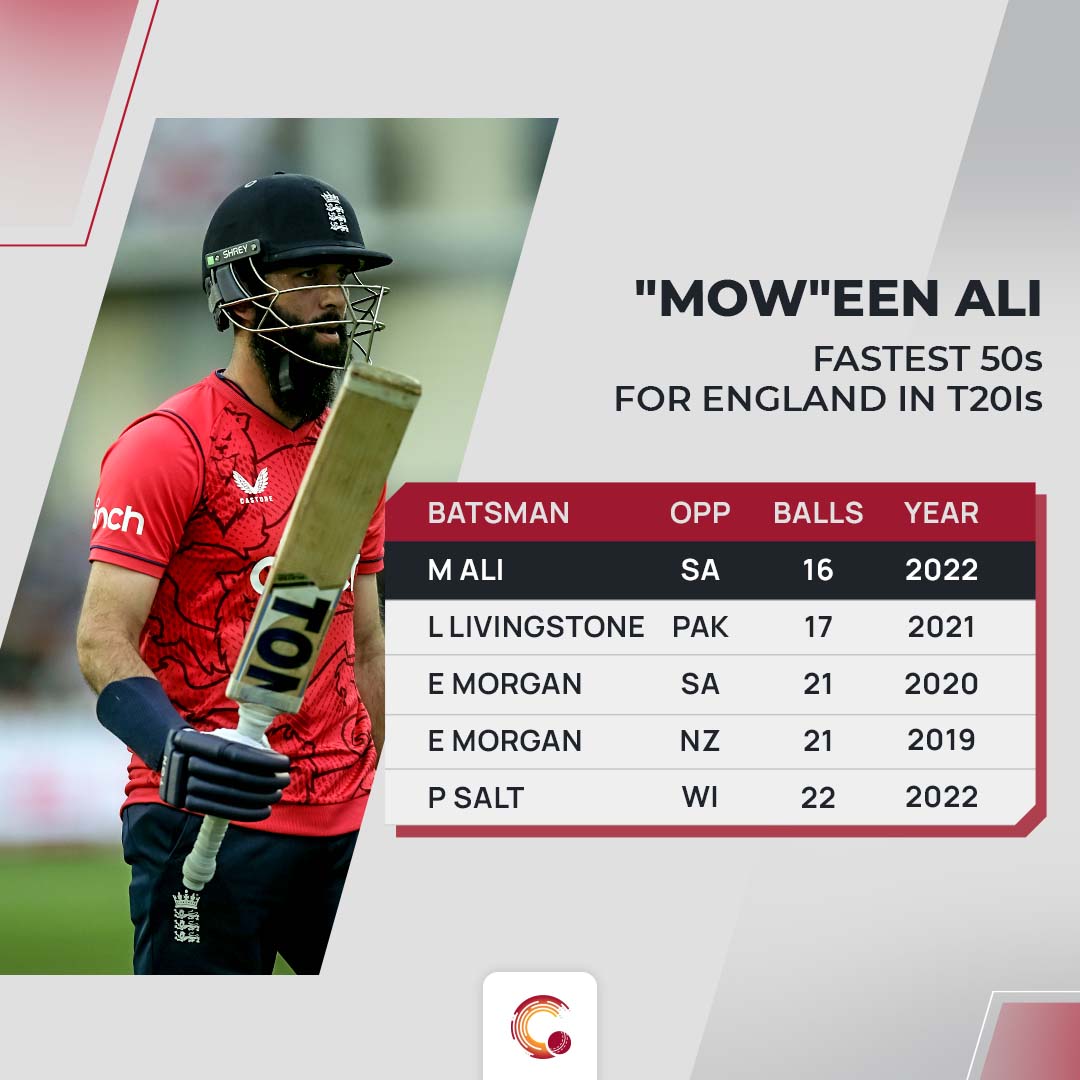 In his innings, he reached his half-century off just 16 balls, the fastest by an England player in T20Is. He bettered Liam Livingstone’s 17-ball half-century against Pakistan in 2021. His strike rate of 288.9 in this innings, is also the best for an England batter in an innings of 50+ score.

Stubbs shines in his first innings with the bat

Making his debut against India in the series earlier in June 2022, Stubbs didn’t get a chance to showcase his talent in the first two games. In the first T20I against England, everyone knew why he was so adored. In his first innings itself, he broke few records:

-Stubbs reached his half-century in just 19 balls, which is the 2nd fastest for a South African in T20Is. Quinton de Kock against England in 2020, had hit a 17-ball 50, the fastest. 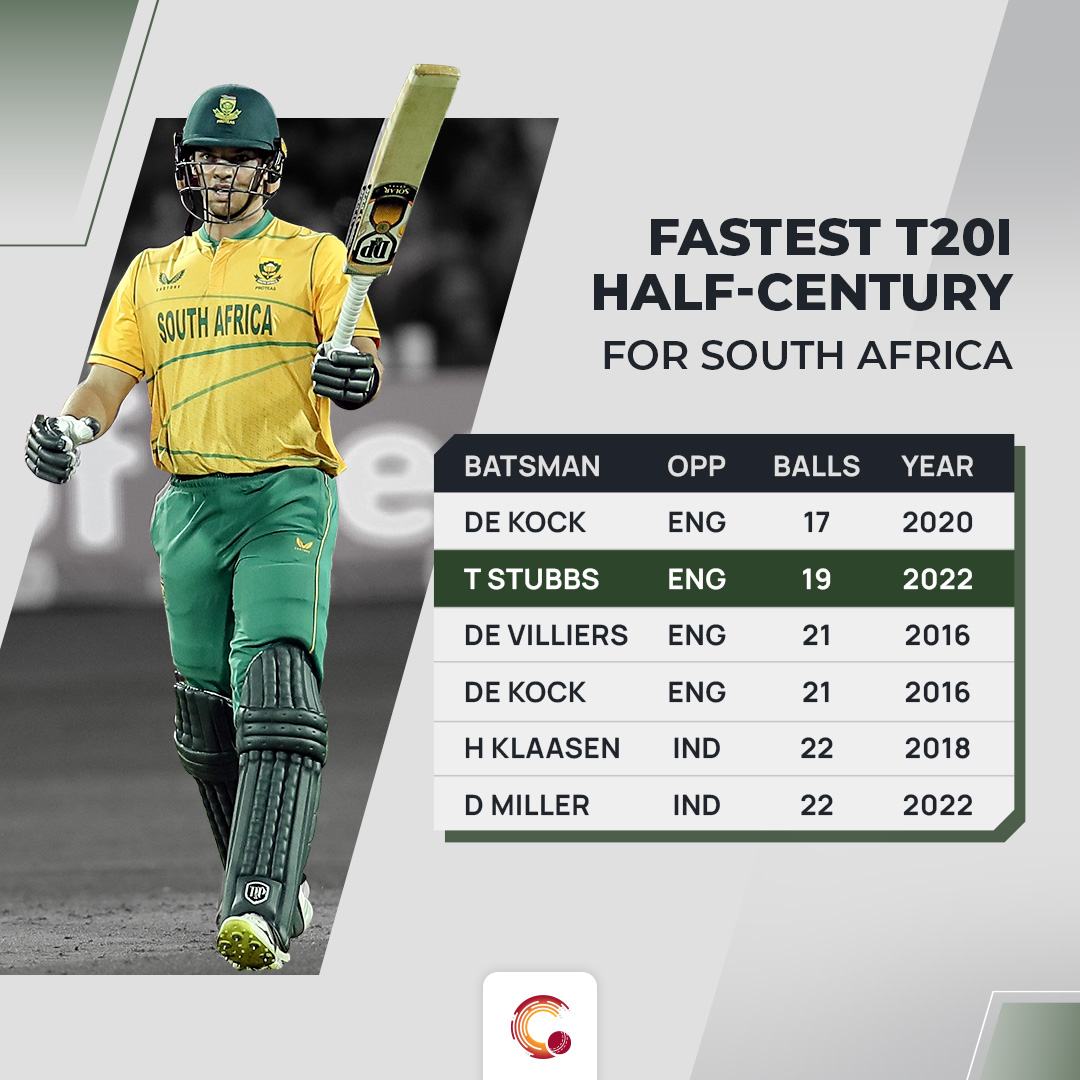 -His score of 72, came at a strike rate of 257.1. Among full-member nation players who has scored 70+ in a losing cause, his strike rate in this innings is the highest. 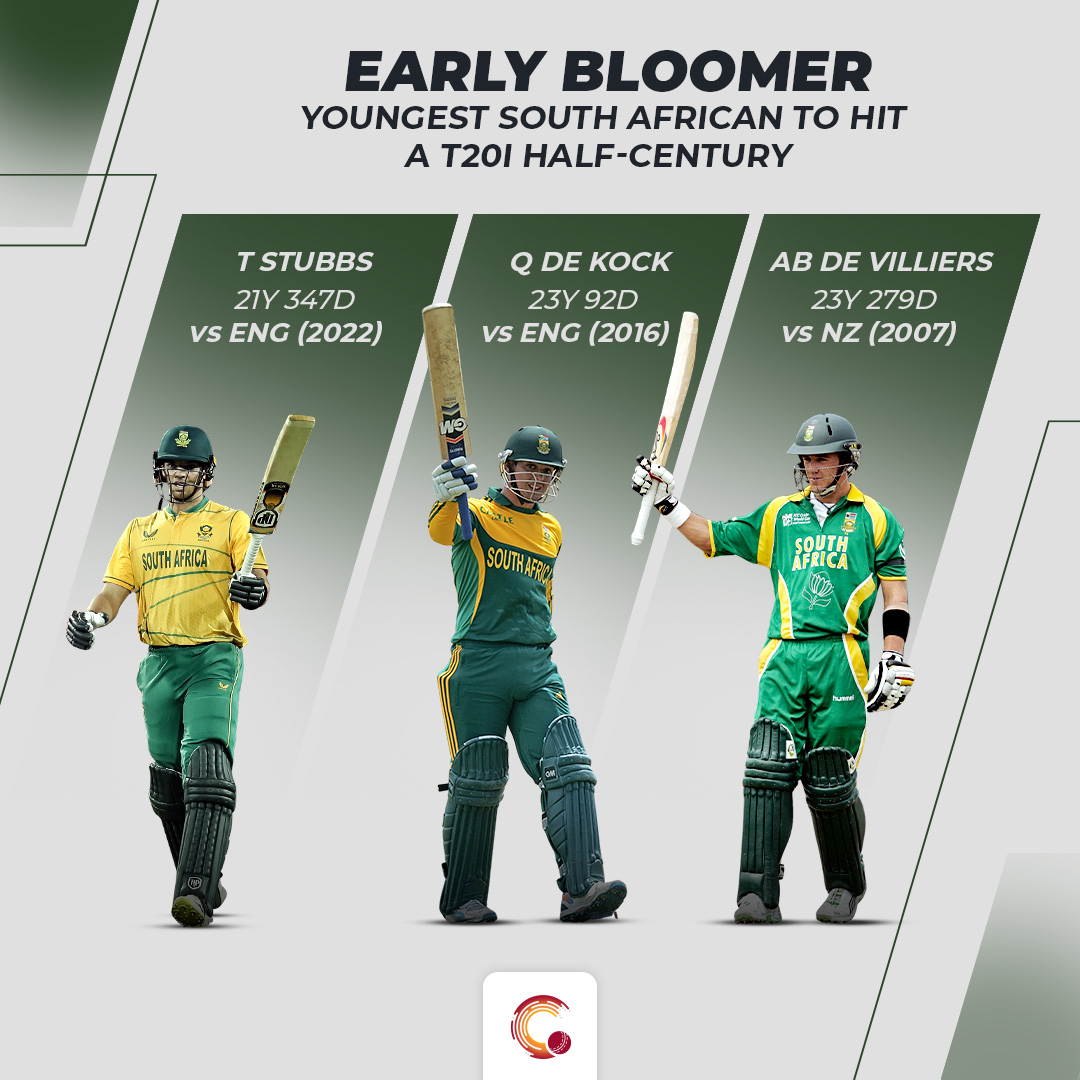 -In his innings of 72, Stubbs smashed eight sixes, which is the joint-second most for a number six or lower batsman among the full member nation batters. Mohammad Nabi against Ireland had hit nine in 2017, the most.

A match garlanded by sixes

A flat pitch and small grounds, the perfect pairing for high scoring encounters. Bristol in the first T20I, was one of those games with this deadly combo. Hence, cascade of sixes was witnessed: 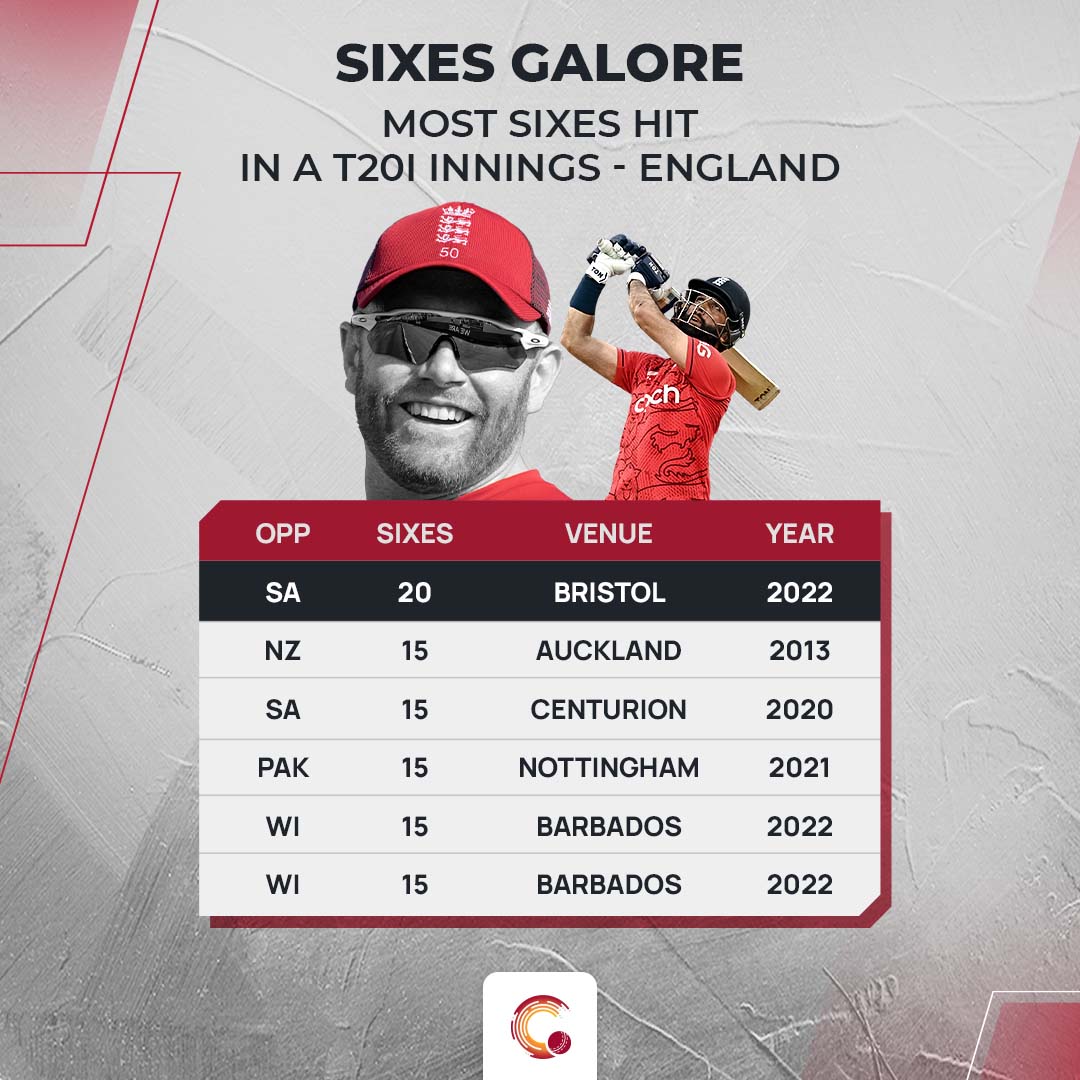 -No team has hit as many sixes as England today, against South Africa in a T20I innings. England in 2020 and West Indies in 2021, had smashed 15 sixes, the highest before.

-England batters smashed nine sixes in the last five overs, which is the joint most by a team in this phase. England have achieved this feat thrice in T20Is. Against New Zealand in 2019 and West Indies in 2022 are the other two instances. 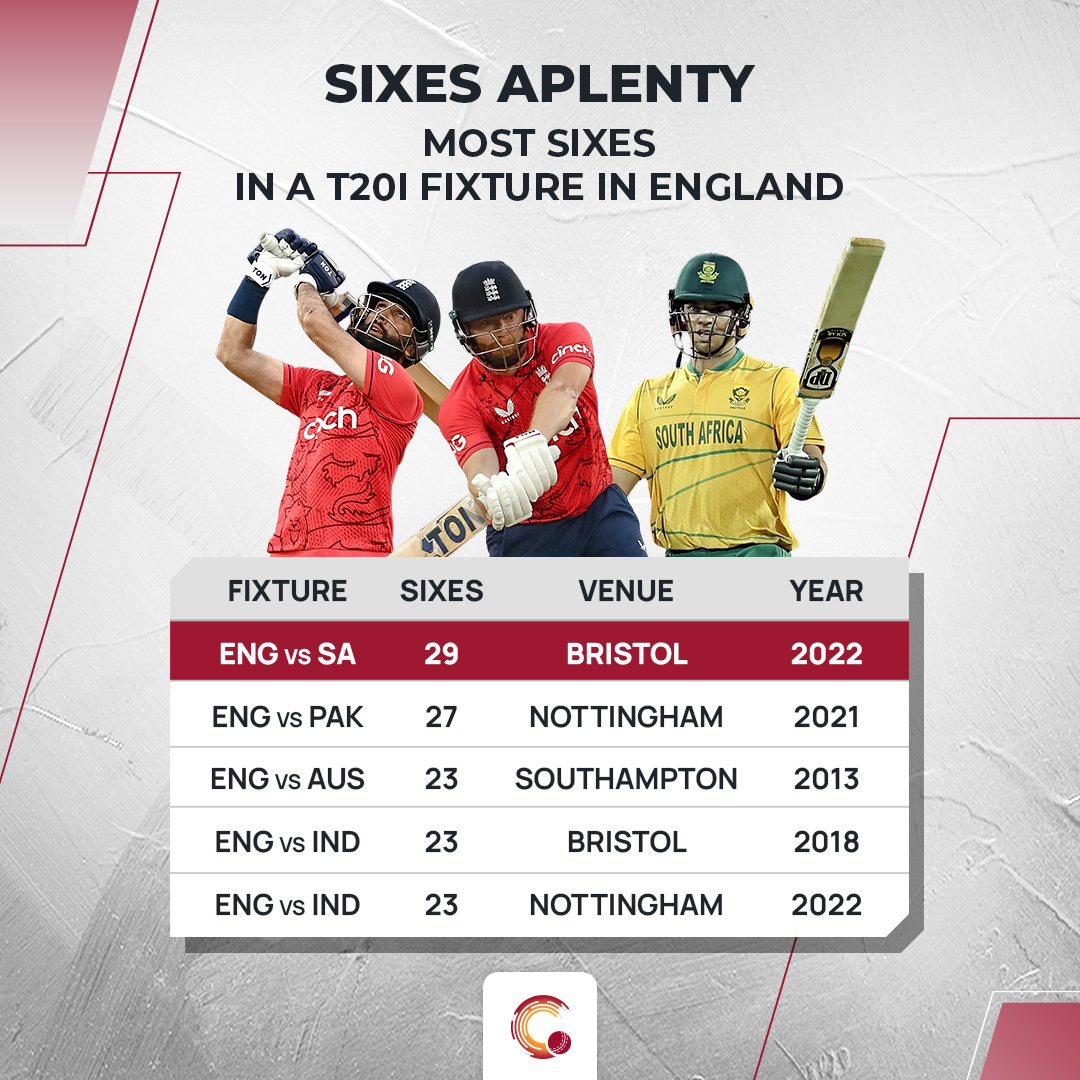 -In total, the match saw 29 deliveries fly over the ropes, which is the most in a T20I on English soil. Before this match, in 2021, between England and Pakistan in Nottingham, 27 sixes were witnessed.

-In this innings, Bairstow smashed eight sixes, which is the second most by an England batter in a T20I innings. Livingstone in his innings of 103 against Pakistan in 2021, hit nine sixes.

A forgetful day for Phehlukwayo

In his first two overs, Andile Phehlukwayo had a decent outing as he conceded 16 runs with one wicket. But, it was just the calm before the storm. 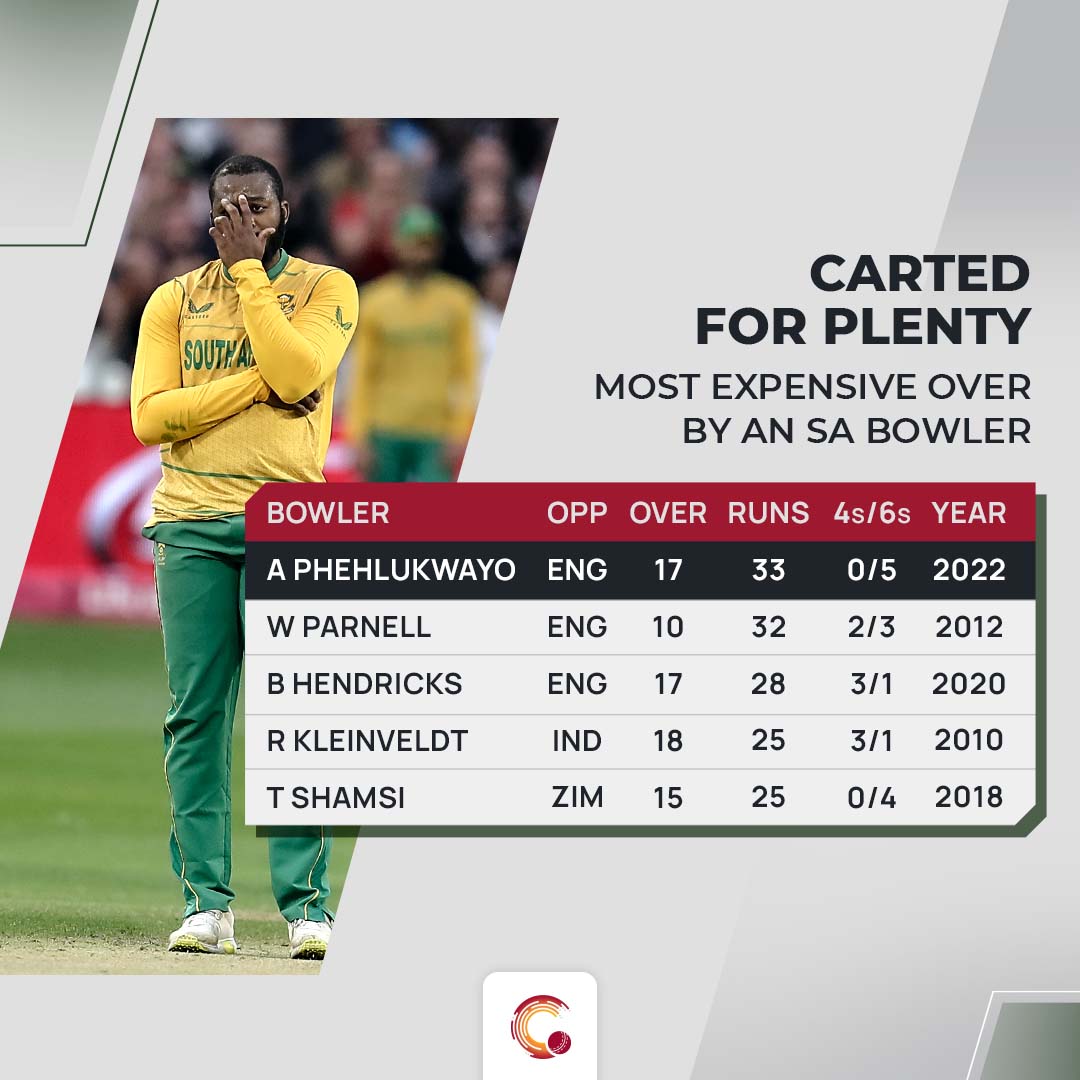 In the 15th over of the innings, Phehlukwayo conceded 14 runs and the major destruction came in the 17th over, his fourth of the innings. Bairstow started the over with two sixes and then, Moeen finished it with three sixes. In total, including two wides, he conceded 33 runs, which is the most by a South African bowler in a over in T20Is. Overall in T20Is, only three bowlers, Stuart Broad (36 runs), Akhila Dhananjaya (36 runs) and Shivam Dube (34 runs), have conceded more runs in an over.

They were able to attain this score on the back of strong performance in the last five overs. In this innings, they scored 86 runs in this phase, which is their second best in T20Is. Against Afghanistan in 2012, they had scored 87 runs, the most in this phase of play.

Bairstow registered his highest T20I score after he ended up with a score of 90. His previous best of an unbeaten 86, also came against South Africa in 2020.

Tabraiz Shamsi conceded 49 runs in his three-over spell at an economy of 16.3. Among full member nation spinners who have bowled three-plus overs in an innings, only Sunil Narine (16.7) against India in 2016 conceded at a higher rate.