Stats: Unstoppable Suryakumar, the 2nd batters to 1k T20I runs in a year 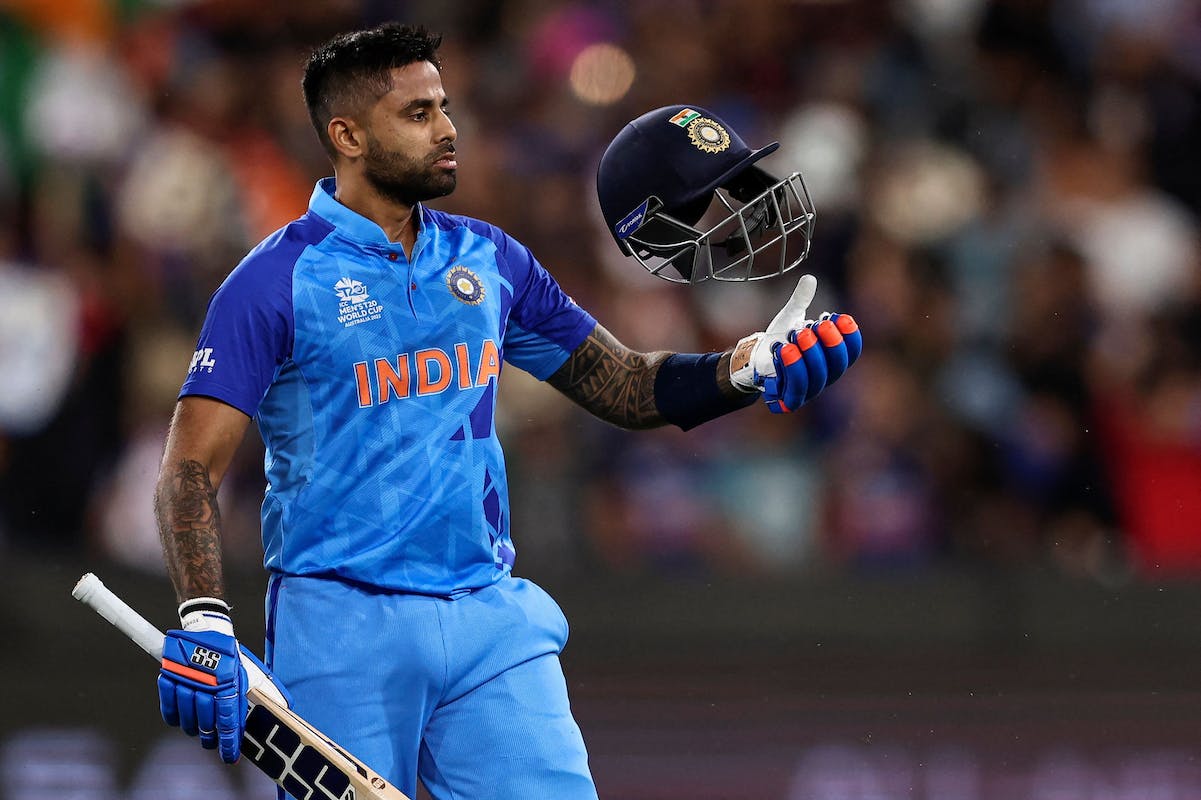 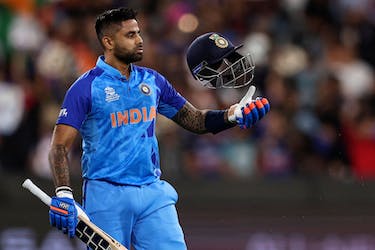 Stats: Unstoppable Suryakumar, the 2nd batters to 1k T20I runs in a year

Though India had qualified for the Semi-finals after a shocking upset by Netherlands against South Africa, they needed a win to top the table. After electing to bat first, Rohit Sharma suffered yet another failure. But, KL Rahul and Suryakumar Yadav made sure that India have a mammoth total on board.

While defending, India had won half of the match in the powerplay when Zimbabwe were 28/3. In the end, India won by a comprehensive margin of 71 runs. With a win today, they will face England in the second Semi-final.

The year 2022 has belonged to one man and that has been Suryakumar Yadav. In his innings of an unbeaten 61 of 25, Surya registered some monumental records: 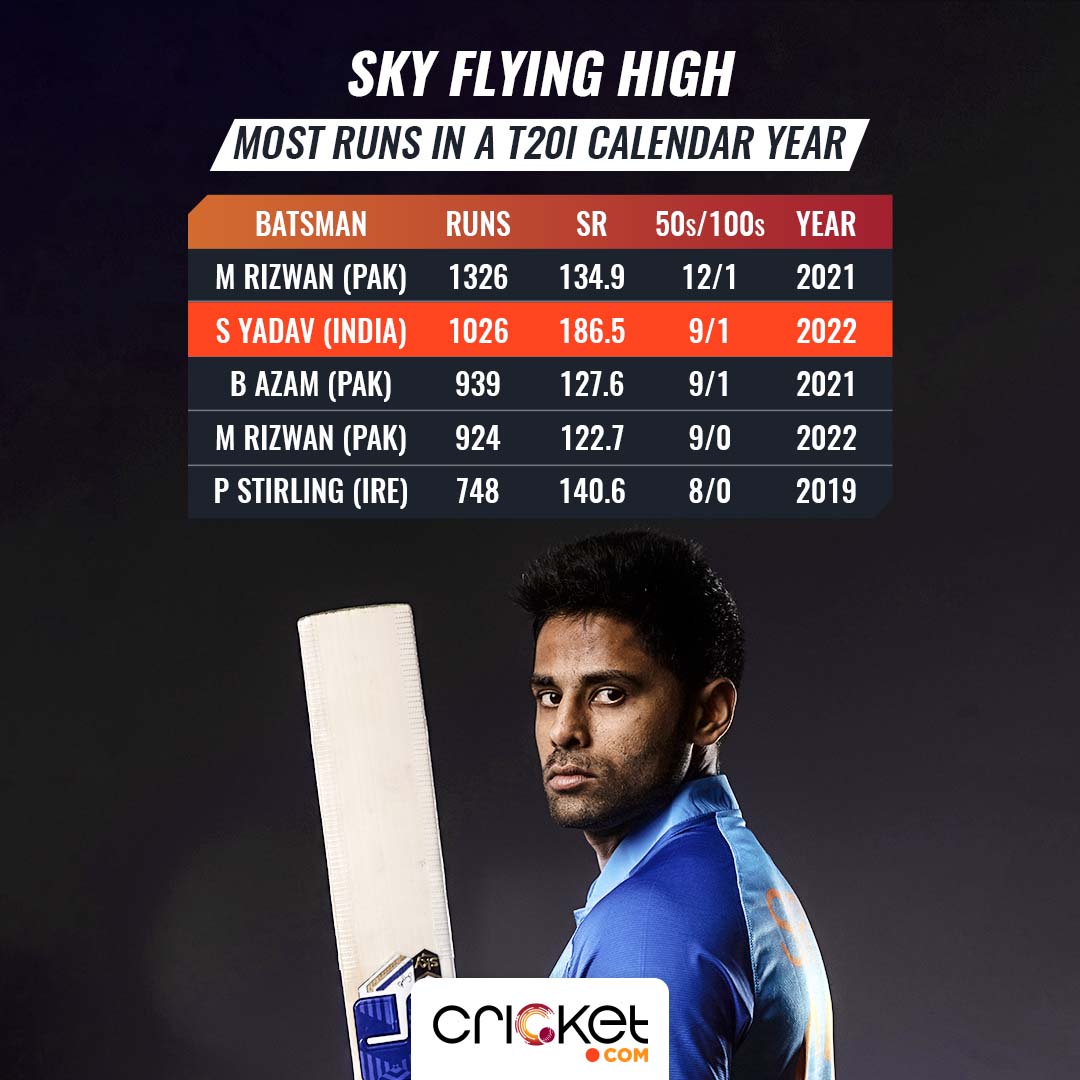 Surya became the second player after Muhammad Rizwan of Pakistan in 2021 to notch up 1000 runs in a calendar year. However, Surya’s impact has been way higher than Rizwan. He has scored those 1026 runs at a strike rate of 186.5 with 59 sixes. 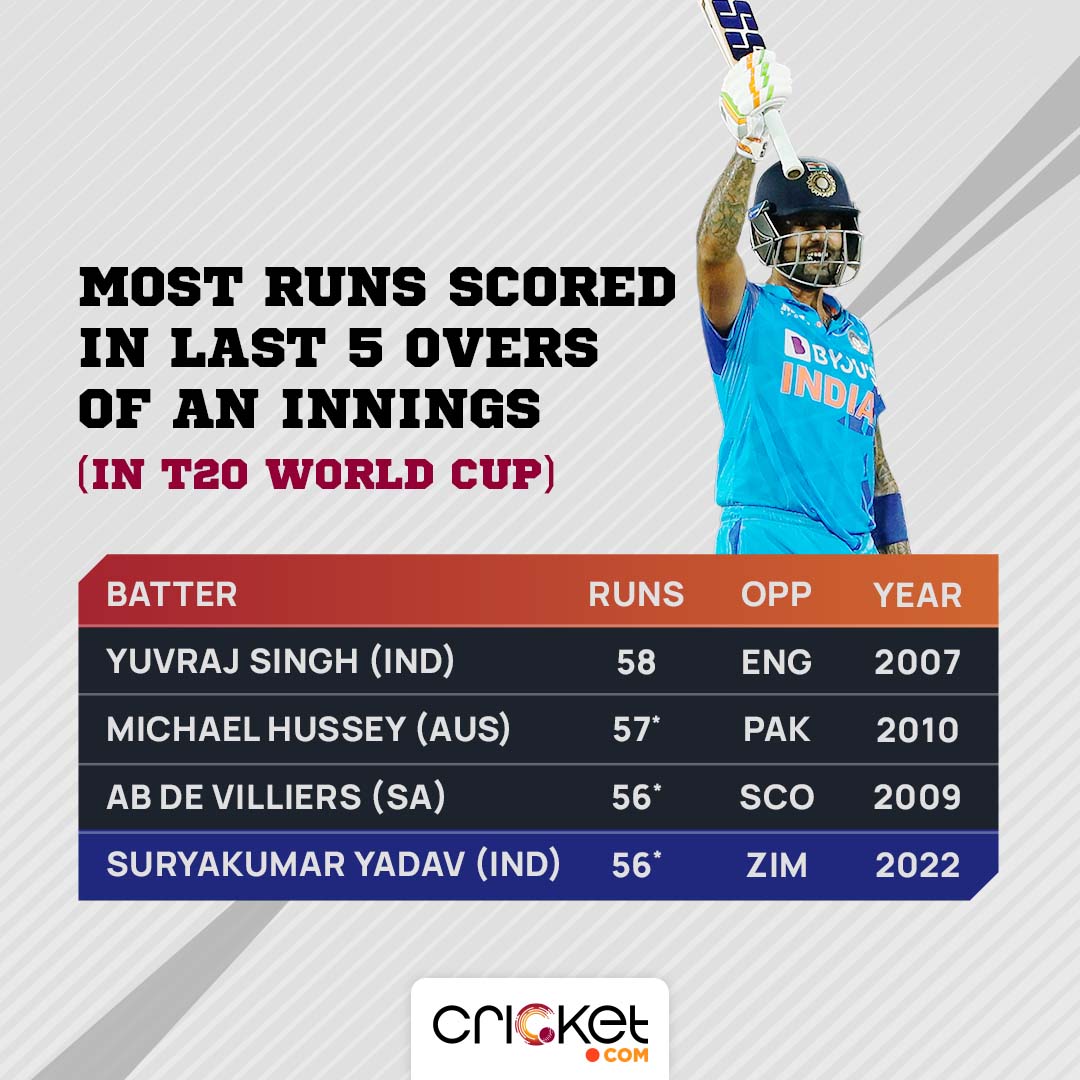 In the last five overs of this innings, Surya scored 56 runs out of the 61. In a T20 WC innings, Yuvraj Singh against England in 2007, Mike Hussey against Pakistan in 2010, scored more runs. AB de Villiers against Scotland in 2009 had also scored 56 runs.

Overall in this innings, Surya scored at a strike rate of 244. Only Marcus Stoinis against Sri Lanka earlier in this WC, had a better strike rate in an innings of 50+ in T20Is in Australia. 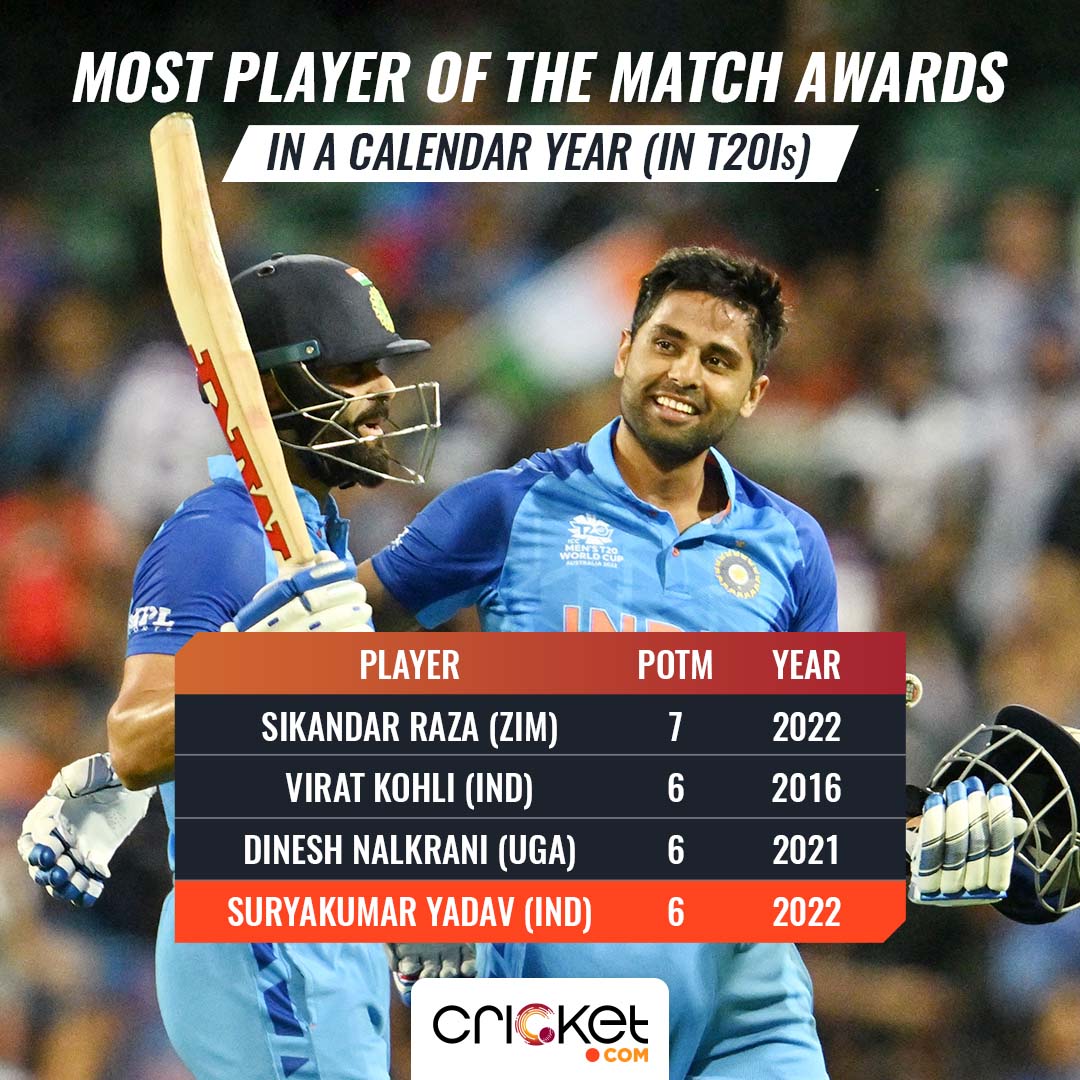 By virtue of his fearless innings, Surya acquired his sixth Player of the Match award in 2022. In a calendar year of T20Is, only Sikandar Raza of Zimbabwe in 2022, has had more awards. There are two others tied with Surya.

Bhuvneshwar provides yet another start

When it comes to providing a breakthrough upfront, India look towards Bhuvneshwar Kumar on most occasions. In today’s match as well, he was the one who came up with the first break. It didn’t take him too much time.

In the first ball of the innings, he dismissed Regis Chakabva. Thanks to that wicket, he now has the most wickets in the first overs of the innings, surpassing Bilal Khan’s 16. He went on to finish the overs without conceding a run. 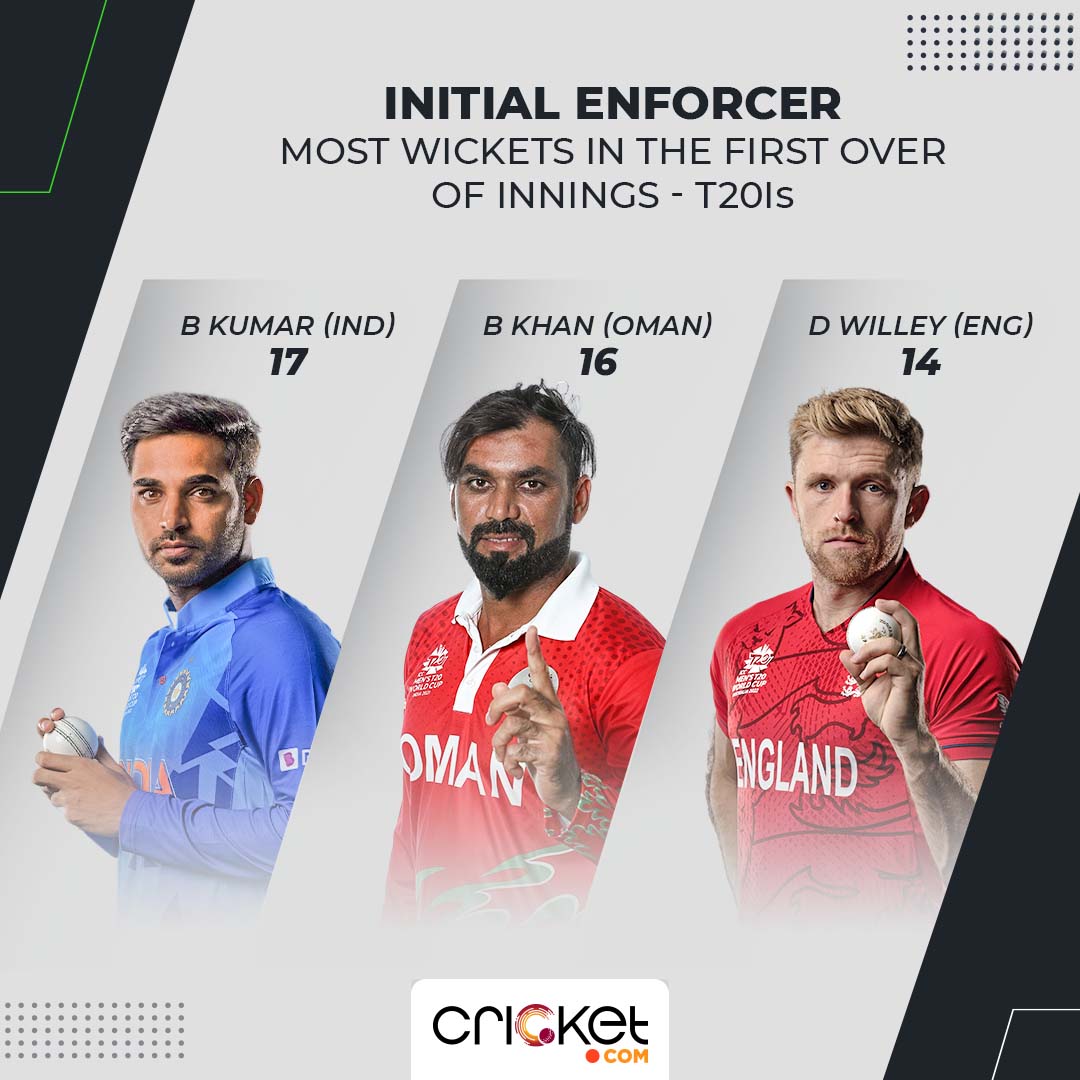 Alongside Bhuvneshwar, Arshdeep Singh has played a very vital role in this WC. In fact, he has been more impactful than Bhuvneshwar. In this WC, he has bagged 10 wickets at an economy of 7.8 and a bowling strike rate of 10.8. Since the start of Super 12, his wickets tally is the joint-second most. Anrich Nortje leads the list.

The Indian skipper might be having a forgettable year with the bat, but as a captain, he has been amongst the wins. With a win against Zimbabwe, India registered their 21st win under Rohit Sharma. In a T20I calendar year, this is the most wins for a captain, surpassing Babar’s 20 wins in 2021. 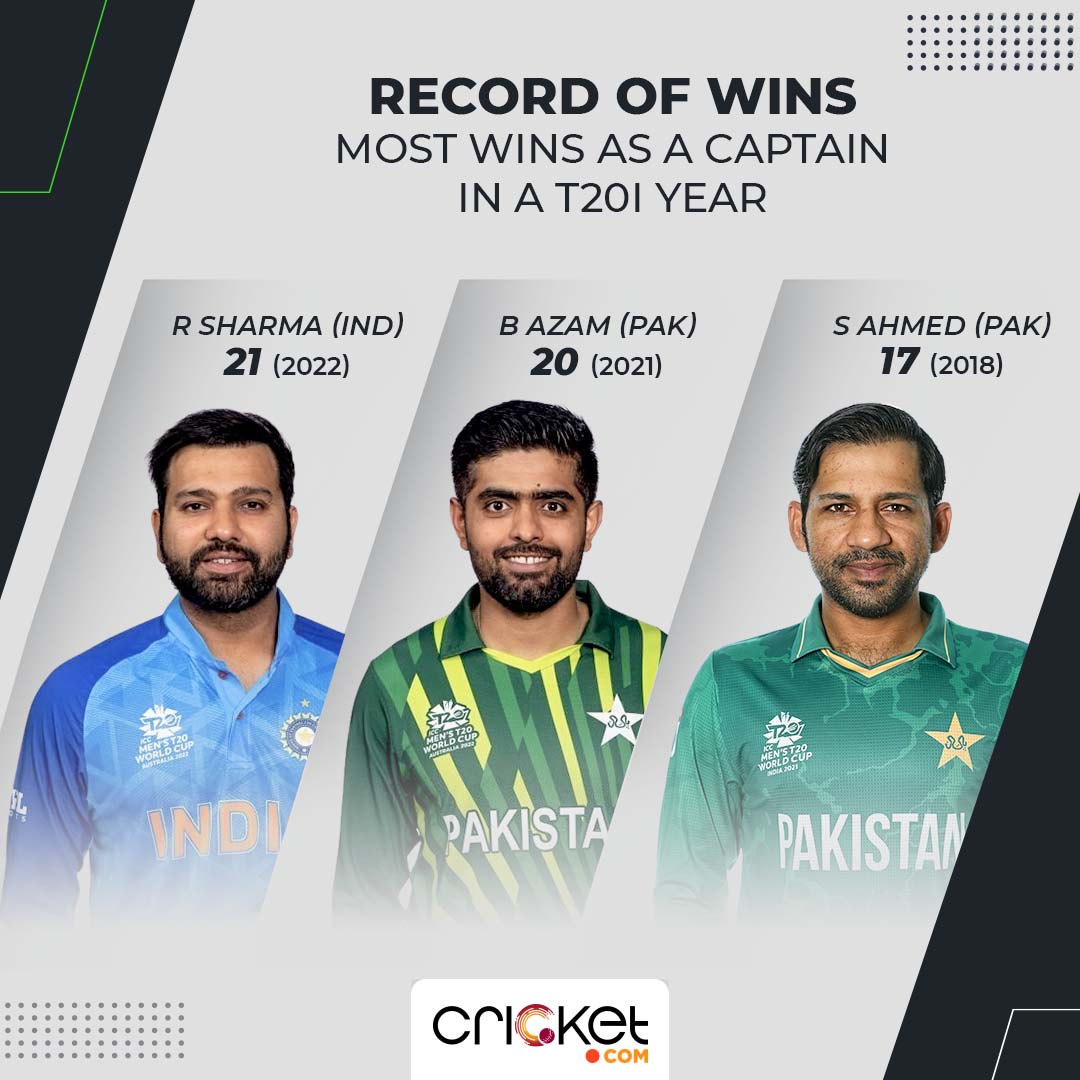 Also, Rohit became the third Indian captain to lead the team in 50 or more T20Is. MS Dhoni leads the list with 72 matches. In 50 matches, Rohit has 39 wins with a win percentage of 78 percent. His 39 wins are the most for an Indian captain after Dhoni’s 42.

Regardless of the result, Sikandar Raza has been the silver lining for Zimbabwe throughout the year. In this match, with the wicket of KL Rahul, Raza added another record to his name.