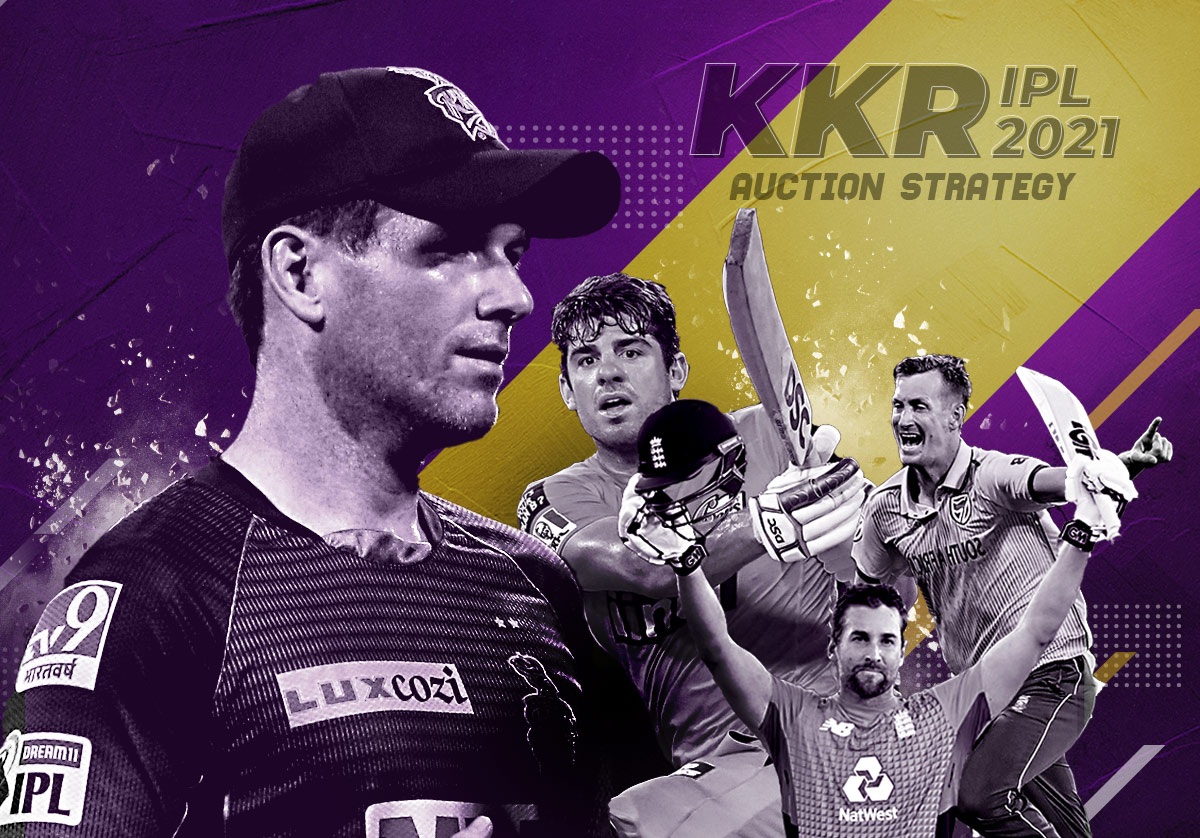 Despite missing out on the Play-offs last season, the Kolkata Knight Riders have not made many changes to their squad. This underlines the ideology of the franchise to stick with their players which they have showcased earlier by retaining Shivam Mavi and Kamlesh Nagarkoti through their injury-laden seasons. In that regard, they are quite opposite to Royal Challengers Bangalore who released 10 players in spite of one of their better seasons last year. Kolkata, on the other hand, released six - Nikhil Naik, Siddhesh Lad, M Siddharth, Tom Banton, Chris Green & Harry Gurney. They also released Ali Khan who joined the team as a replacement player but kept Tim Seifert.

There were rumours that they will release Dinesh Karthik and Kuldeep Yadav which did not materialize. Letting go off Karthik especially would have been silly given experienced Indian finishers are a rare commodity. Apart from leading Tamil Nadu to the title in the recently concluded Syed Mushtaq Ali Trophy, Karthik scored 183 runs, averaging 61 at a strike-rate of 157.8. He remains to be an excellent player of pace bowling in the death overs.

One can question if they could have released Kuldeep. The Chinaman has picked only five wickets in 14 games since IPL 2019. In addition, the rise of Varun Chakravarthy makes it tough for him to find a place in Kolkata’s XI. After retaining Kuldeep, Kolkata could have done well to release Sunil Narine whose numbers have been on a downward curve. That would have freed up Kolkata’s purse and another overseas spot but the trust factor built in a nine-year long association may have engendered them to back him once again.

KKR best XI based on the current squad- 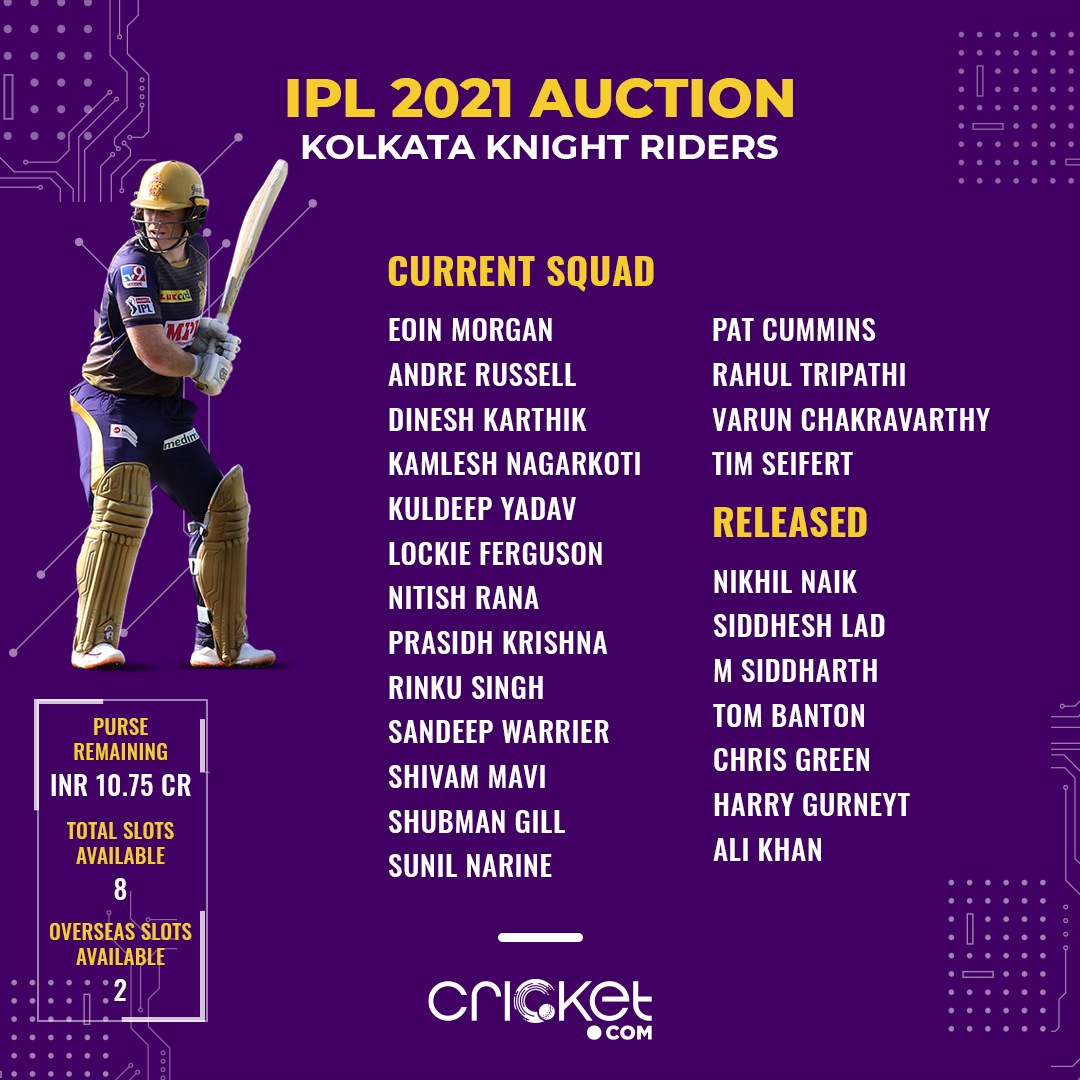 None of the Indian pacers who have represented them since 2018 have played for India. The inexperience has reflected in numbers. Kolkata employed Pat Cummins at a hefty price last season but the move did not pay off to their expectations. Lockie Ferguson was their most impressive pacer last year but for some reason, he has bowled only eight overs in the Powerplay in his 10 games for Kolkata.

Since there are little to no options of experienced Indian fast bowlers in this auction, Kolkata can rectify their Powerplay woes by hoping for better returns from Cummins and using Ferguson more with the new ball. But given the dynamics of their side, playing both of them looks unfeasible which means something needs to be done about their Indian pace quota.

Although, unproductive bowling Powerplays is not Kolkata’s only problem. Do they have death bowlers? The numbers show they don’t. They are in a precarious situation where they have been unproductive in two of the three bowling phases. 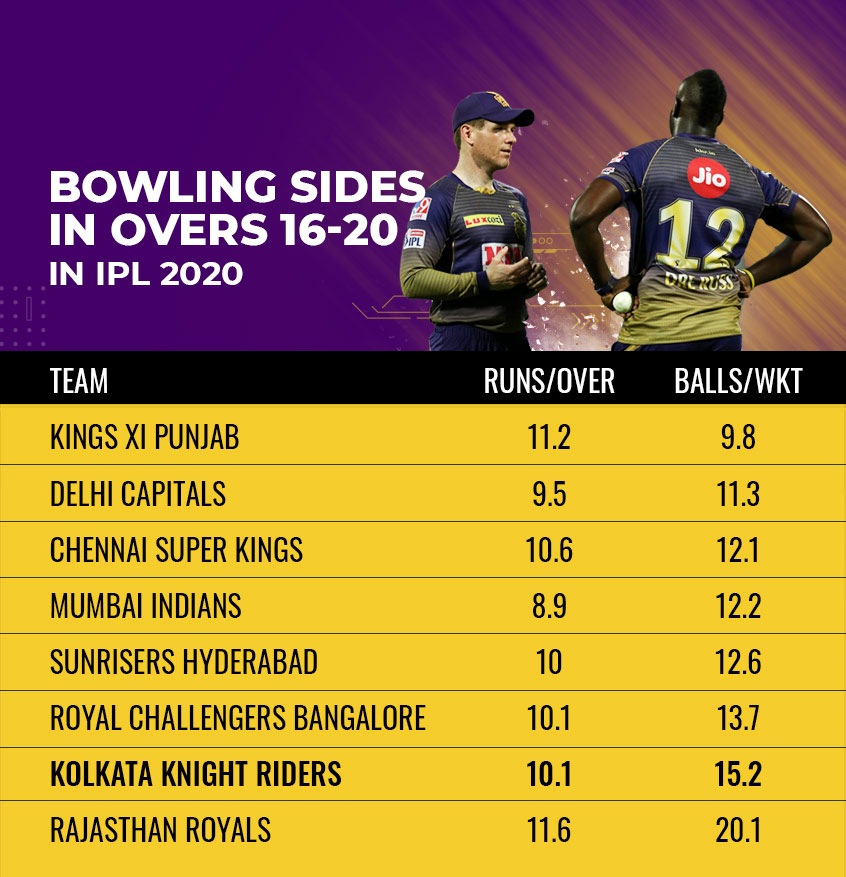 Sunil Narine held the responsibility of the death overs for a long period but he is a fading star now. The re-laid surface in the Eden Gardens and regular warnings against his action reduced his impact. 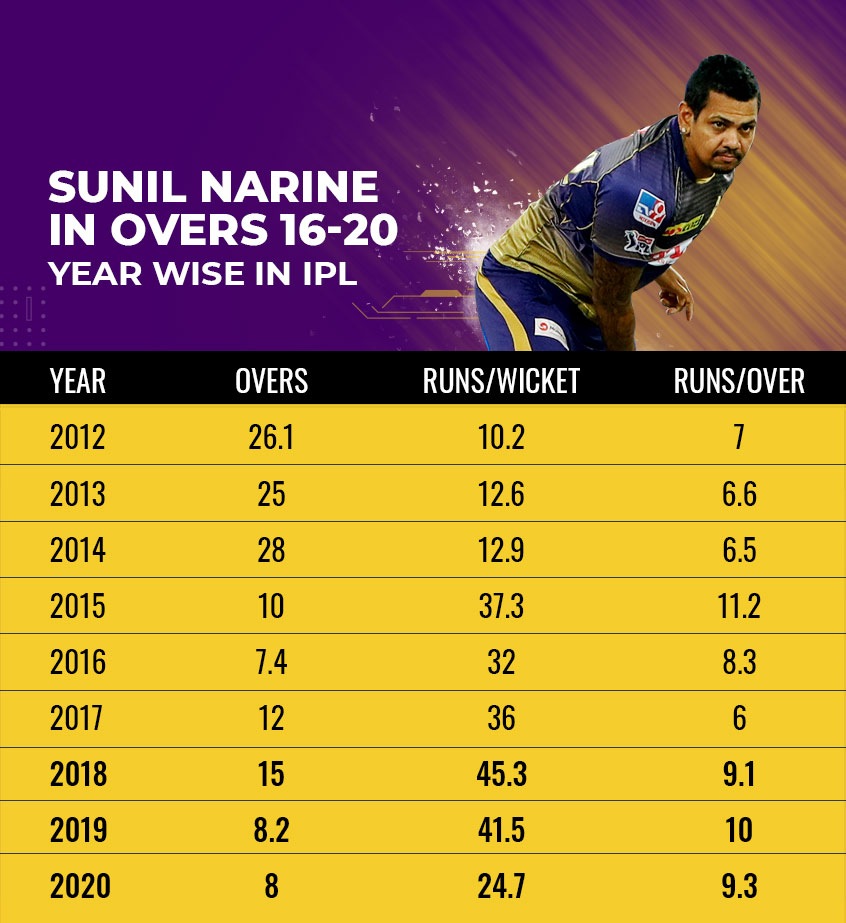 The other two players who have bowled over 20 overs for Kolkata at the death since 2018 IPL season are Andre Russell (25.1) and Prasidh Krishna (29.2). The former is injury prone and the latter has been half-decent at best. Both of them have an economy of 10.4 runs per over in this criteria. There is no doubt that Kolkata need to boost themselves in this domain as well.

In terms of Indian options, they yearn for experience and the only choice available in auction to strike with the new ball is Umesh Yadav. All the other Indian pacers who have played T20 cricket for India since 2018 are currently acquired by one side or the other. A lesser experienced option is Varun Aaron.

Moving to the overseas lot, they would want to fix their death bowling woes with Chris Morris but Kolkata’s limited purse may keep them bereft of the all-rounder’s services. The other potential big players at the auction - Jhye Richardson and Kyle Jamieson - might also stay away from their grasp.

More affordable options lie in bowlers like Mark Wood, Jason Behrendroff, Liam Plunkett, Fidel Edwards, Adam Milne and a number of other fast bowlers. Nathan Ellis could be a dark horse for them after showcasing his ability to deliver yorkers and slow balls in pressure moments.

Shubman Gill, Sunil Narine, Rahul Tripathi, Tom Banton and Nitish Rana opened for Kolkata in the 2020 IPL. Banton is released, Rana is best suited at three and the prolonged days of Narine as an opener seems numbered as he has been found out against raw pace. Tripathi has shown spark but it is always better to have options in hand. They currently have Seifert, a swashbuckling wicketkeeping batsman who has grown in reputation in international cricket in the past year but Kolkata would want an experienced option as well.

Luckily for Kolkata, they have a number of options available, comprising of Englishmen and Australians. Jason Roy, Liam Livingstone, Matthew Wade, Alex Carey, Colin Munro showed decent form in the 2020/21 Big Bash League season and will be up for grabs in the auction. The versatile Sam Billings can also do the top-order duties. In terms of experience, their eyes would be on Aaron Finch. However, his dismal returns in IPL over the years may put Kolkata in second thoughts when his name arrives in the auction.

There is none better than Dawid Malan, the number one ranked T20I batsman but their limited purse might be an obstacle for them to fetch the left-hander, given they first need to boost their bowling department.

The Indian options at hand are both limited and unavailable.

Andre Russell was the biggest let down for Kolkata in IPL 2020, both in terms of fitness and his performance. While they can keep their faith in the star all-rounder to get into the runs again, it is tough to expect the same with his fitness. Although, Russell seems committed to get back to his best shape. He skipped the T10 league and instead joined a fitness programme aligned by the Kolkata management in the USA. But it still remains best for Kolkata to get a back-up.

Chris Morris and Kyle Jamieson remain to be the two best options for them. By acquiring them, Kolkata can kill two birds with one stone - obtain a pacer who can bowl at the death and in the Powerplay and provide some handy finishes.

In a more like-for-like replacement - a batting all-rounder who can contribute with medium-pace bowling - they can look at Moises Henriques. He has both IPL experience and current form in his resume. Not a finisher per say but Henriques has been excellent in the middle-phase of the innings. Since 2019, he has scored 584 runs between overs 7 to 15 at a strike-rate of 161.8 - the third-highest amongst 109 batsmen to have scored over 400 runs in this phase. A slot for Henriques in the middle-order - alongside Eoin Morgan - will also allow Kolkata to play Rana as an opener, if required. Another similar option is Ben Cutting.

Overall, Kolkata have some crucial slots to fill but with a purse of INR 10.75 crore - the joint least alongside Sunrisers Hyderabad - acquiring all the required players will be a big challenge. It is going to be interesting to see which positions they will manage to fill.