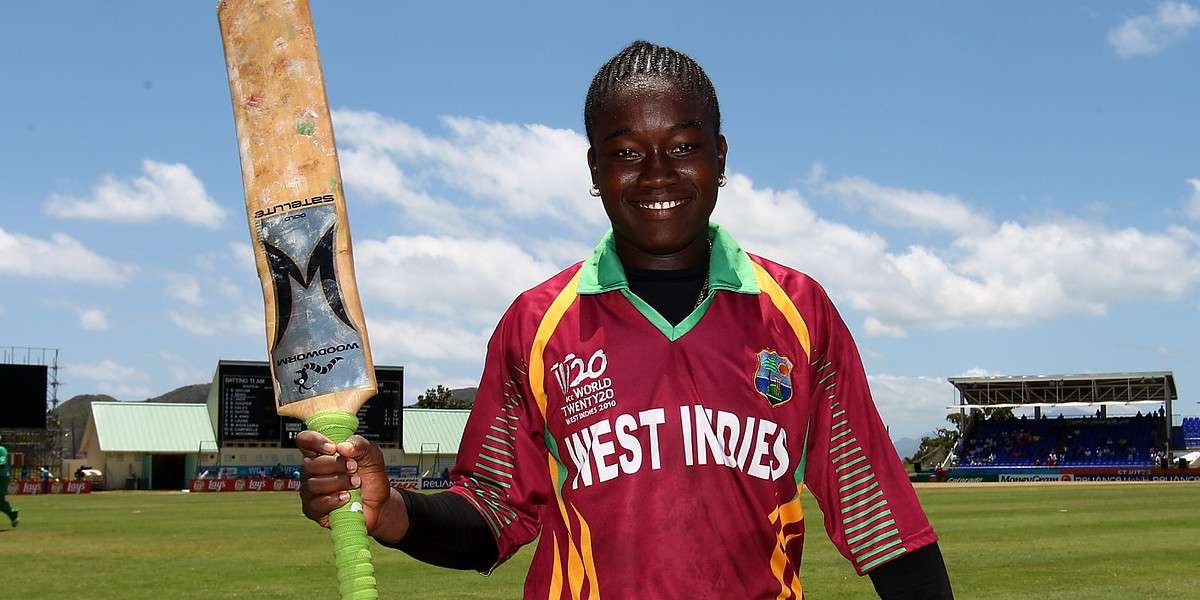 On this day, the West Indian batter smacked a 45-ball 112 against South Africa

If there's a discussion going on about all the big-hitters in women's cricket, the name Deandra Dottin will for sure be on everyone's lips. The destructive Barbadian is one of the most dangerous batters in Women's cricket. No matter what the situation is, she can take down anyone on her day and her power game is second to none. Dottin, who calls herself “World Boss”, has been a key player for West Indies ever since she made her debut in 2008. She was part of the 2009 World Twenty20 where she smacked a 22-ball half-century against Australia, which was then the fastest by any woman in T20Is.

Just over 11 months later, on this day, the right-handed batter smoked a 38-ball hundred against South Africa in the 2010 Women's World Twenty20 and became the first female player to score a T20I century. Her century remains to be the fastest in women's cricket to date and even in overall T20Is, her record stood firm till October 2017 before David Miller slammed a 35-ball hundred against Bangladesh. She smashed seven fours and nine sixes in her 45-ball 112 and operated at a stunning strike rate of 248.88.

South Africa held the early advantage after winning the toss in the tournament opener as the likes of Chloe Tryon, Charlize van der Westhuizen and Angelique Taai reduced West Indies to 52/4 before the end of 10 overs. That's when Dottin walked in to bat and still went on to hit a century, with her second fifty coming off just 13 deliveries. West Indies had already lost Stafanie Taylor, Cordel Jack, Juliana Nero and Britney Cooper and were scoring at less than six runs per over at Basseterre, which had small boundaries.

The host nation was under pressure but Dottin was having none of it. She didn't take much time to settle in and got a boundary off Dane van Niekerk to set the ball rolling. She was scoring at least one boundary every over and meanwhile Shanel Daley was enjoying all the thrashing from the non-striker's end. Legspinner Van Niekerk struggled to keep Dottin in check as the right-hander pushed West Indies' run-rate over 6. South African skipper Cri-zelda Brits brought Tryon back into the attack but Dottin welcomed her with two sixes and forced her out of the attack.

She blasted three sixes and four fours to get to her half-century, off 25 balls, and that's when things got even worse for South Africa. Dottin smoked six sixes and a four in the space of two overs and West Indies from 114/4 sky-rocketed to 160/4 in just 12 deliveries. While four sixes came in Van der Westhuizen's final over, Taai conceded 19 in the 18th over. Dottin moved to 99 in these two overs and completed her century on the very first ball of the penultimate over. She added 118 runs with Daley, with the latter scoring just 10 and that tells you how dominating Dottin was. She did manage a couple of boundaries in the final two overs as West Indies finished on 175/5 in 20 overs.

"It feels really good to be the first woman to make a century in Twenty20 cricket and this record and win mean a lot. I am happy I did it for the team when we needed it most," Dottin said of her achievement. "After we lost two quick wickets, the plan was that Shanel (Daley) and I would pick up singles and hit every bad ball. However, when I saw that the overs were slipping away from us I decided to go after everything, it was either do or die. I knew that the team needed me and I just kept my eyes on the ball, played with some patience and played straight.

"It doesn't matter who the bowler is. I just play the way I always do. I was just thinking that the century looked possible and aimed at that. It doesn't really matter where I play, I am comfortable at any position."

In reply, South Africa got off to a steady start with Shandre Fritz (58) and Brits (43) adding 84 runs for the second wicket. The two batted till the 16th over and South Africa were still in the game, but both were run out in the space of three deliveries and the rest failed to match the required rate. Dottin later even picked up a wicket as South Africa were restricted to 158/4, 17 short of the target.

West Indies then defeated England by two runs and made it to the semi-finals, where they lost to New Zealand by 56 runs. Meanwhile, Dottin had a horrid time in the rest of the tournament as she only managed to score one run in her remaining three innings.

Five months later, Fritz herself got a century to her name against Netherlands. A total of 26 centuries have been scored in women's T20Is, with Heather Knight and Lizelle Lee being the recent two, in the 2020 T20 World Cup.

In 2017, Dottin once again slammed a century. This time 112 off 67, studded with nine fours and five sixes, against Sri Lanka. Dottin, Danielle Wyatt of England and Australia's Meg Lanning and Beth Mooney are the only players to have achieved the feat two times.

Dottin suffered a serious injury to her right shoulder in early 2019 and underwent reconstructive surgery in June. She was out of the game for over a year and only made her comeback in the 2020 T20 World Cup. She failed to make an impact, making only 12 runs in three innings.