Will give Wood, Malan every chance of playing the final: Jos Buttler 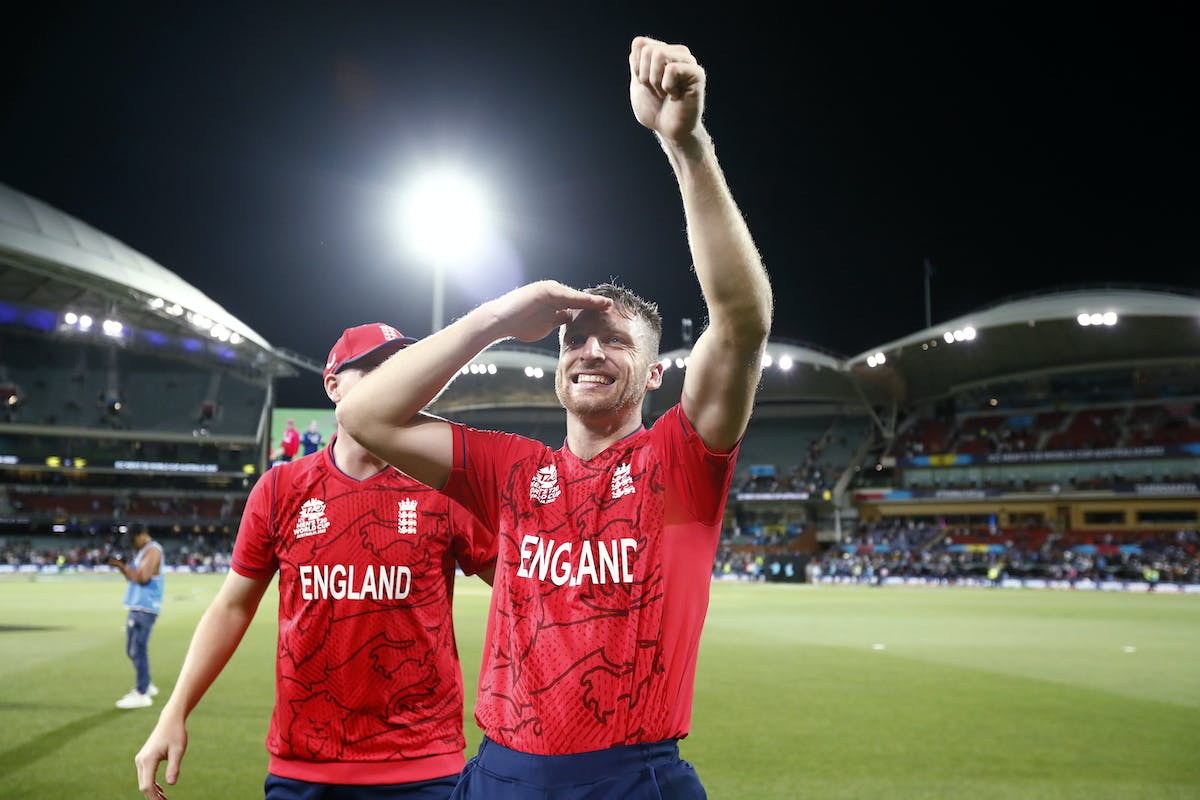 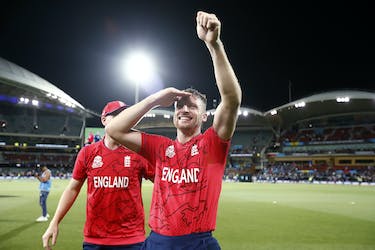 Will give Wood, Malan every chance of playing the final: Jos Buttler

England captain Jos Buttler has provided an injury update on Dawid Malan and Mark Wood ahead of the T20 World Cup 2022 final at the MCG on Sunday (MCG). While he admitted that they were never in contention for a place in the semis, Buttler says the management will give the duo every possible chance to play the final.

In their absence, Phil Salt and Chris Jordan took their place in the semis against India. While Jordan picked up three wickets, Salt did not get a chance to bat as Buttler and Alex Hales wrapped up the game with 10 wickets to spare.

"Yeah, they're both improving. Of course it's not too many days since not being fit enough for the semi-final, but again, we'll give them every chance possible," Buttler said at the pre-match press conference.

Both Wood and Malan suffered injuries during England's final Super 12 game against Sri Lanka. While Wood walked off the field with a groin injury, Wood's injury was described as a muscle tear.

England white-ball coach Matthew Mott however has revealed that things do not look good for Wood and Malan.  "Malan and Wood are definitely struggling," Mott said.

"We'll keep an open mind. But there's a short turnaround between games, with a travel day and then straight into it with one training session. There isn't a lot of time for them.

"I would like to maintain a bit of hope them. It is disappointing. They have been two great players for us, particularly over the last month. They are big losses.

"But it is a real risk taking injured players into big games and I think you can really regret that, particularly when you've got players that can come in and do a good job.

"Sometimes you gamble when you don't have that depth, but when you've got players that are capable of doing a role, I think it makes the decision a lot easier. Everything would have to go right for them to be available at the moment."

England, the holders of the 50-over World Cup have a chance to add to their trophy cabinet on Sunday and Buttler says there is a lot of excitement in the camp as they have a chance to hold both white-ball trophies at the same time.

"Yeah, naturally there's huge excitement for the match. Anytime you get a chance to play in a World Cup final is a huge honour. We're really excited as a group. There seems a nice feel around the team," Buttler said.

"Naturally the previous performance gives us lots of confidence, but it doesn't count for anything tomorrow. We start a fresh game against a really tough opposition, and anytime you're fighting for a trophy, you know that it's not going to come easy."

England registered a T20I series win in Pakistan recently. Buttler, who played no part in it due to an injury feels that it will not count for much as the conditions were completely different.

"Yeah, we've played against them a lot recently, but of course in very different conditions," Buttler, who scored an unbeaten 80 off just 49 deliveries in the semis against India said.

"I think that's probably the main factor about even though we've played each other quite a few games here at Melbourne, it's going to be a different game to the series, obviously, in Pakistan.

"We know we're up against an excellent team. That's exactly what you expect in a World Cup final, and we'll focus on them a little bit and focus on us a lot and what we need to do to prepare well today to turn up tomorrow and give the best account of ourselves."

While England are still reaping the rewards of Eoin Morgan's legacy, Buttler feels that his partnership with Mott will help them usher in a new era in English cricket.

Since their embarrassing exit from from the 2015 World Cup, England turned a corner in white-ball cricket under Morgan, who reached the T20 World Cup final in 2016 and ended up winning the 2019 50-over World Cup under Morgan.

"Hopefully I've got more time ahead myself as a captain and with Matthew Mott we can hopefully shape the next, as I say, era of English white ball cricket," Buttler, who tookover from Morgan as England's limited-overs captain said.

"We're very much right in the back of that wave, of course, but there's a bit of a new direction, as well."

This is Buttler's first World event as captain and says he is enjoying the added responsibility.

"Yeah, I think I certainly enjoy some bits a bit more than others. But yeah, definitely. I think talking about teams and going through different eras, I think it's part of my own sort of journey as a player and as a person to now be at this stage of my career where I'm a captain learning at something very new that I haven't done before, and that's exciting to get the chance to do that," Buttler, who has led England in 19 T20Is said.

"It keeps things interesting, learning new experiences and going through that. I certainly feel like I'm improving day by day really getting the job and feeling more comfortable in the role as it goes on.

"I think maybe as frustrating as the summer was in terms of result, I think I actually learned a lot through that period with the benefit of having a few months after to kind of reflect on things I probably would have done differently or what certain situations arose and how they made me feel and how I reacted to them.

"Yeah, I feel like I'm growing into the role day by day."

England's recent success across formats could perhaps stem from the fact that they have a coach for Test cricket and one for white-ball cricket. Buttler reckons that could an approach many teams follow in the future.

"I think the nature of the schedule of English cricket makes it near enough impossible for one man or woman to do the whole job," Buttler explains.

"I think we play so much cricket and have so much traveling and time away, I think that's sort of become untenable really to have one coach. Yeah, it's certainly something I think other teams may look at. It seems to be working well so far for English cricket, and hopefully that will obviously continue.

"I think even when sort of one person was in charge, you were sort of seeing them having to miss certain series or one of the assistants taking over for a little bit. Certainly in terms of the stability of the groups, I think it's a real plus that we know exactly who our coaching staff is, who our head coach is, and they have full ownership over that team."

"Yeah, obviously Pakistan are a fantastic team. I think they have a very long history of producing excellent fast bowlers, and I see the team that we're up against as no different," Buttler said.

"I'm sure by the end of their careers, some of the guys who we'll play against will go down as some of the best bowlers Pakistan have produced. That's a huge part of why they get to a World Cup final.

"We expect a really tough challenge, as mentioned before. They're a team we've seen lots of in the recent past, and we've had some brilliant matches against them, played in a fantastic spirit, and I'm sure tomorrow will be no different."

As far as Pakistan captain Babar Azam is concerned, he says his side will look to continue the momentum his team have built over the last four matches in the final. Pakistan seemed down and out after they lost the first two games in the Super 12, but fought their way back to make their way to the semis. They beat New Zealand comfortably in the semis to progress in the final.

"Of course we have our first two matches lost, and that cost us. But the way our team come back last four matches and they perform very well, and we are playing good cricket in the last four matches. Yes, we will try to continue that momentum in the final," Babar said.

The final at the MCG could be hampered by rain. However, there is a reserve day in place in case we do not get a full match in on Sunday (November 13).