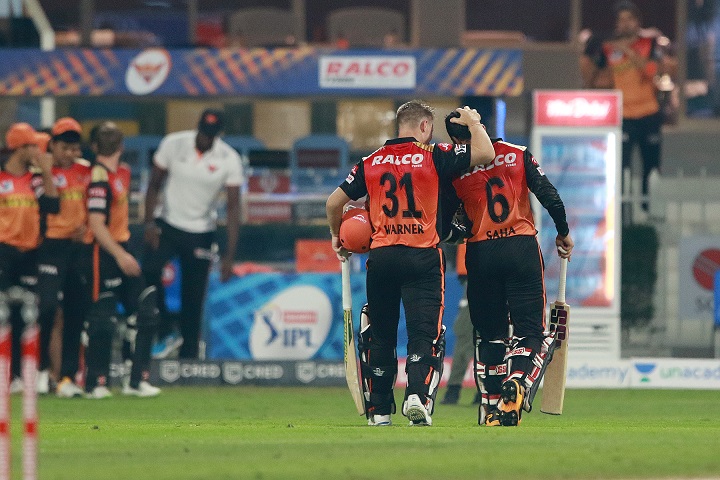 SRH had a dreadful start to IPL 2020. Things would deplete further for them before they rose again to make their presence felt

Everything that could go wrong went wrong for the Sunrisers Hyderabad in the initial phase of IPL 2020. Mitchell Marsh suffered an ankle injury and was ruled out for the rest of the season. Bhuvneshwar Kumar, in the 4th game, sustained a thigh muscle injury which meant he was out for at least 6 to 8 months. A gun top-order, a rather fragile middle-order and a perfect blend of Indian operators with the world's best T20 bowler, Rashid Khan. This was the Sunrisers' dugout in a nutshell.

Hyderabad had a tumultuous journey to the playoffs. They could only muster three wins off their first nine games and yet somehow, find themselves in the top four - for the 5th consecutive year. How did Hyderabad turn a dreadful start into a constructive one? Let us take a look. 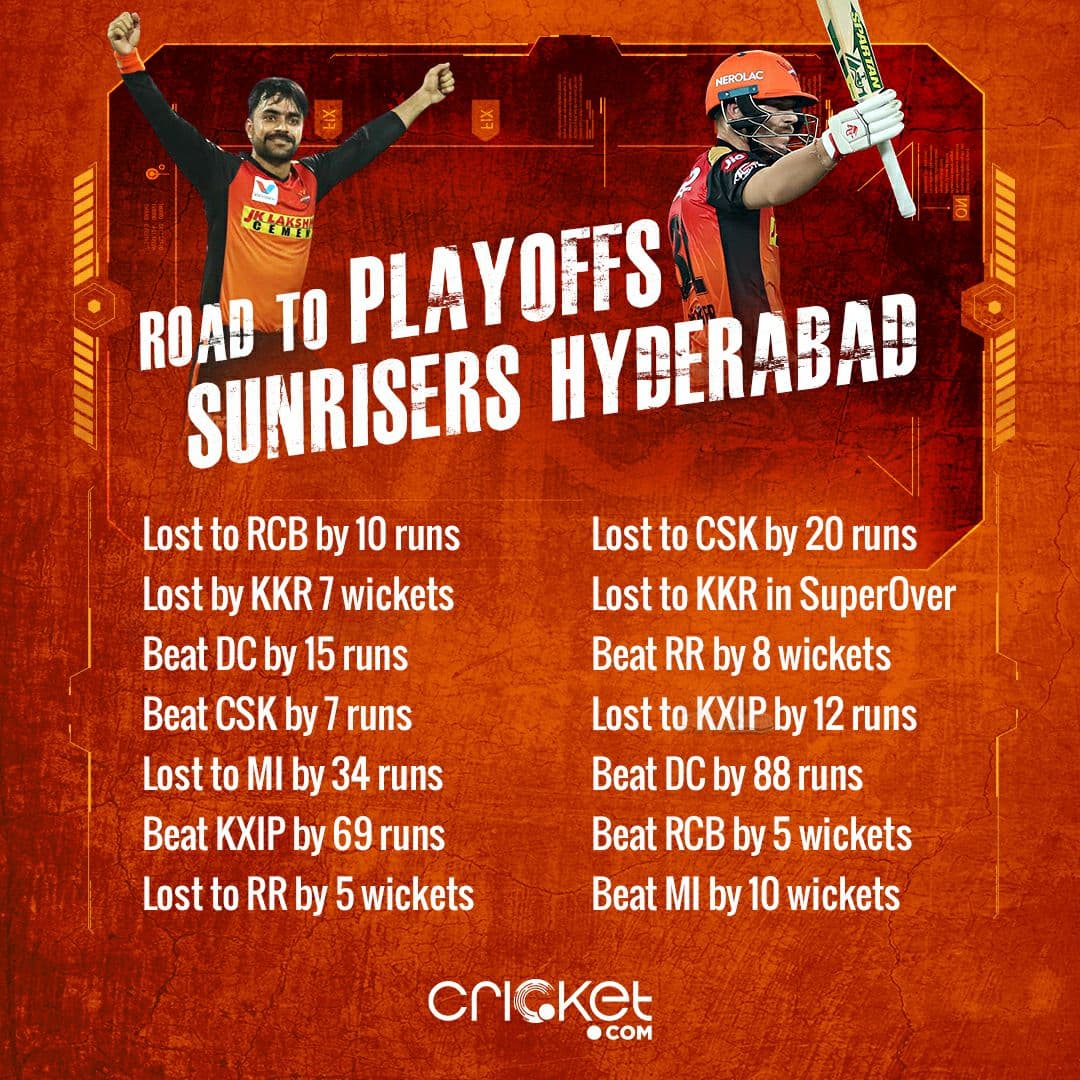 DAVID WARNER - THE GOLIATH OF IPL

David Warner is undoubtedly one of the most prolific run-getters in the Indian Premier League. In 140 innings, the Aussie dasher has scored 5235 runs at a staggering average of 43.26 and a strike rate of 141.79. In the first nine matches, Warner scored 331 runs at an average of 36.7, but his strike-rate wasn't anywhere close to the 'David Warner Range'. Probably because he wanted to bat with more responsibility.

Seldom do we see Warner play second-fiddle, curbing his natural instincts. Warner's strike-rate in the first nine games was a mediocre 117.4. In the last four games, however, out of which, Hyderabad went on to win three, Warner went into beast mode. The Hyderabad skipper smashed 194 runs and his strike-rates in the last four games read - 175, 194, 160 and 147 respectively. Warner can change games on his own and on current form; he'll be the man to keep a keen eye on. 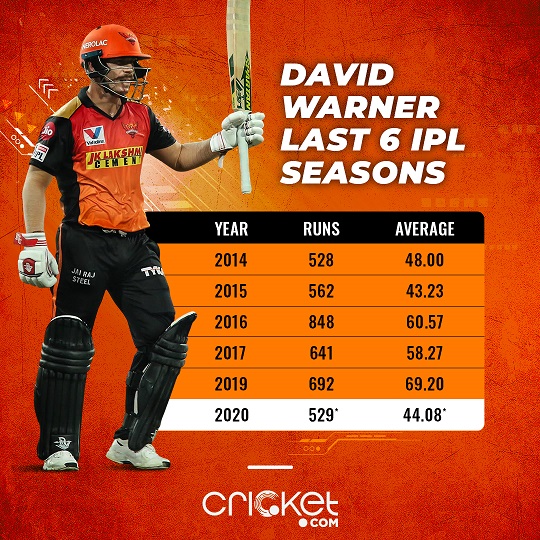 He doesn't hurry the batsmen with lethal bouncers nor does he hurl in yorkers at a rapid pace. But what Sandeep Sharma can do is bewilder batters with his swing and dexterity. Sandeep, like Warner, brought his A-game to the fore just when the team needed it the most.

In the first seven games for SRH this season, the swing bowler bagged only four wickets but turned things around in the last four games. His figures in the last 4 games for Hyderabad read - 3/34, 2/20, 2/27 and 2/29 respectively. The right-arm pacer has picked 13 wickets in the season so far and nine of those have come in the Powerplay. Only Trent Boult (12) and Jofra Archer (10) have bagged more scalps during this phase. The knuckleball, the in-dipper, the away-swinging delivery and the yorker, Sharma can bowl them with immaculate precision and if he executes them to perfection, Hyderabad will be one step closer to the finals.

Did You Know: Sandeep Sharma has now picked 53 wickets in the Powerplay in IPL. The most by any bowler. The pacer went past Zaheer Khan's tally of 52. 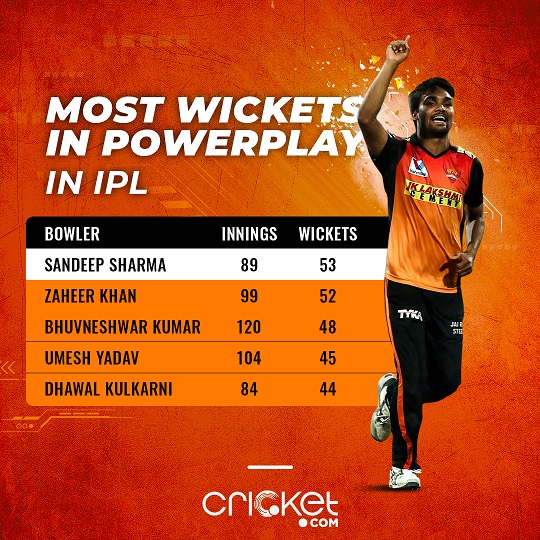 THE NEW ‘YORKER KID’ ON THE BLOCK

Thangarasu Natarajan Aka 'Yorker Nattu' has taken to IPL like a fish to water. That analogy does complete justice to what the 29-year-old pacer has managed to produce. The left-arm pacer played six games in the 2017 edition but could not make an impact then. This season he has picked 14 wickets at 31.35 and conceded 8.00 runs per over. The high economy-rate, owing to the fact that Natarajan bowls the most difficult overs and he's been quite a revelation at the death. The left-arm pacer has bowled 21.5 overs (second-most for bowlers, after Jasprit Bumrah) in the death, has conceded 10.5 runs per over but has picked 10 wickets in this phase. 4th on the list for most wickets from overs 16-20. 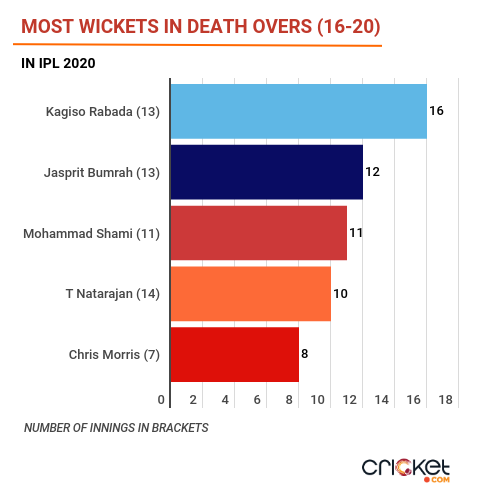 Sandeep with the new ball in the Powerplay and Natarajan at the death, Hyderabad sure have two exciting talents operating in the most demanding phases of the game.

Rashid has picked 19 wickets at a strike-rate of 17.68 deliveries and an economy rate of 5.28 runs per over. Just to put into perspective as to how miserly the wristspinner has been, here's a stat - out of the 14 innings Rashid's bowled in, 8 times he's conceded 6 or fewer runs per over. His best spell in the league - 3/7, also is the most economical spell of the tournament.

Rashid has made the ball do all the talking and the likes of Virat Kohli and AB de Villiers will have to deal with the very best. 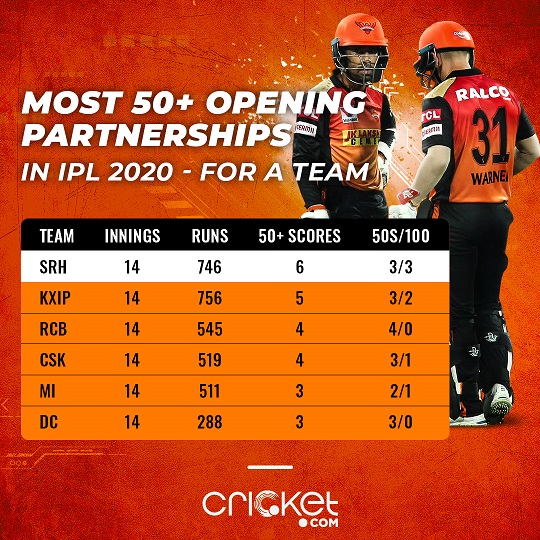 Wriddhiman Saha was mediocre in his first outing for SRH where he scored 30 off 31 against Kolkata in a losing cause. Jonny Bairstow’s exclusion against Delhi Capitals provided a second chance to Saha. Hyderabad were put into bat by Shreyas Iyer and in walked Saha along with Warner. What followed was an onslaught of the highest order. Saha smashed 87 off 45 deliveries, an innings full of dazzling stroke-play. Hyderabad won that game by 88 runs. He followed that knock with 39 off 32 and in an unbeaten 10-wicket victory against the league leaders Mumbai, Saha remained unbeaten on 58 off 45.

Warner and Saha, the new opening duo, put on 107, 10 and 151* in Hyderabad's last three league matches. Plenty will rely on how Saha and Warner begin for the Sunrisers. If they fire, they put Hyderabad in a position of strength.

Jason Holder provides stability in the lower middle order, Shahbaz Nadeem hit the right lengths against Mumbai and Manish Pandey has looked in fine batting rhythm. The only concern for the Hyderabad lads is their record at the Sheikh Zayed Stadium. They've played 3 games at this venue and lost on 2 occasions.

The stakes are high and Hyderabad seem to have peaked at the right time. Can they lift their 2nd IPL title?