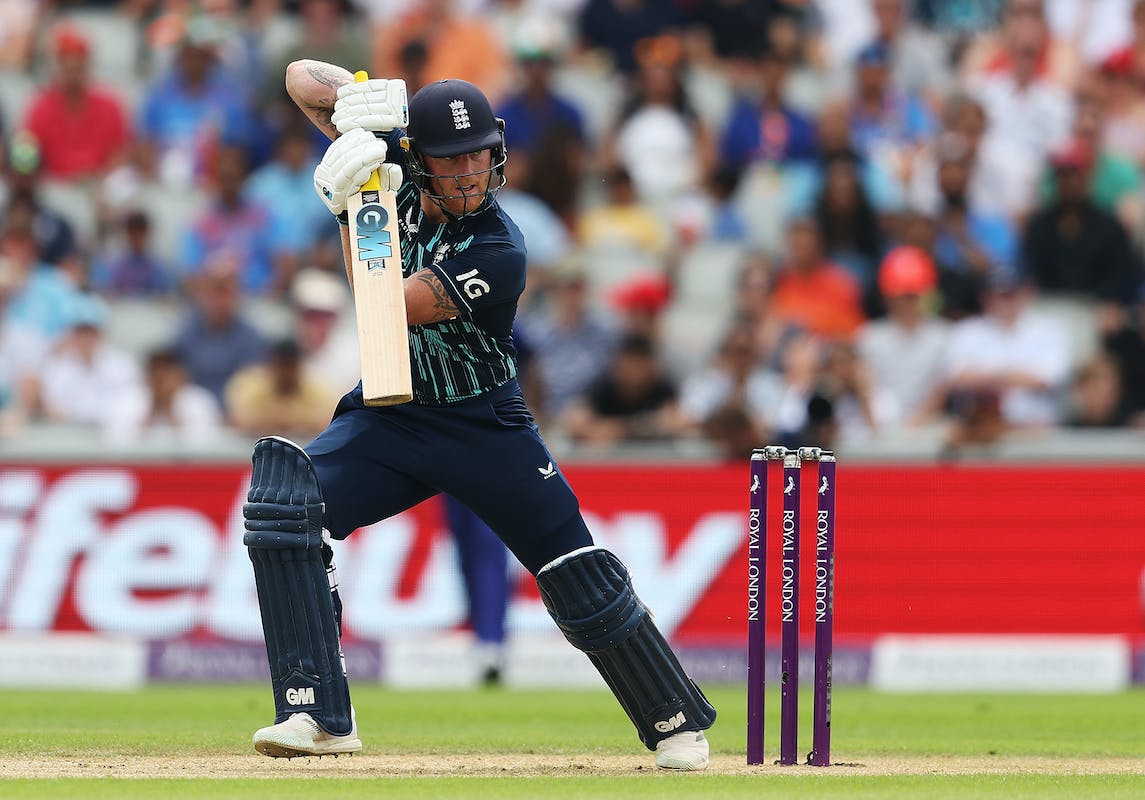 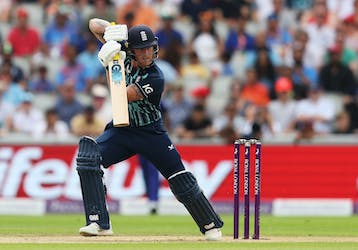 A couple of days after the series decider at Old Trafford against India, England are all set to rekindle their rivalry against South Africa, starting with the first ODI on Tuesday, July 19, at Chester-le-Street in Durham.

With the increasing debate surrounding the future of the fifty-over format, the match will be followed by every England fan as Durham's favourite son, Ben Stokes, will bid adieu to ODI cricket after playing his final game at his home ground.

"I will play my last game for England in ODI cricket on Tuesday in Durham. I have decided to retire from this format.”

While the news of Stokes announcing his retirement shocked the cricketing pundits across the globe, it was something most people expected, considering the increasing need to manage his workload after being picked to lead England to a new era in the red-ball format.

"Three formats are just unsustainable for me now," revealed the Test skipper as he aims to focus his energies on helping the team scale greater heights in the remaining two formats.

In a career spanning over a decade, Stokes emerged as the notorious boy of England cricket, with his off-field controversies taking centre stage in the initial years at the international level.

While he was born in Christchurch in 1991, Stokes moved to England at the tender age of 12 and honed his skills at the Cockermouth Cricket Club before graduating to play for Durham in the County Championship.

With consistent performances in the domestic circuit making the noises for all the right reasons, Stokes made his debut for the national side against Ireland in a fifty-over game in Dublin.

Despite managing to score only three runs in his maiden appearance, Stokes was touted as the player to watch out for in the future. However, with diminishing returns at the international level, Stokes struggled to cement his place in the playing XI of the side in the white-ball format.

A string of low scores in the T20Is against West Indies a couple of weeks before the T20 World Cup in 2014 resulted in the southpaw losing his cool. Stokes smashed a locker after being dismissed for a golden duck in the final game of the series by a slower delivery from Krishmar Santokie. 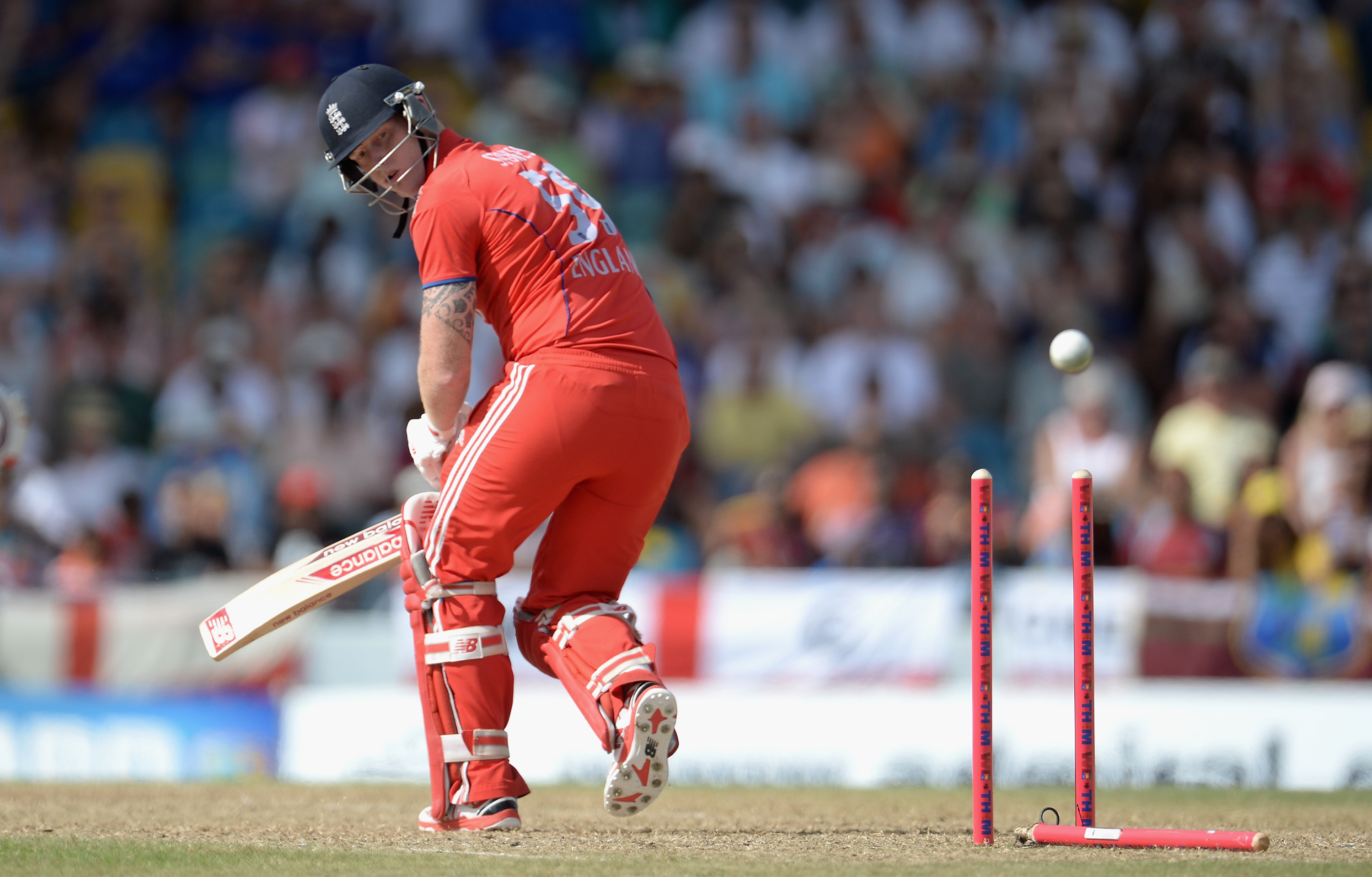 A wrist fracture courtesy of this behaviour ruled him out of the T20 World Cup in 2014 in Bangladesh. "It was a huge error in judgement following a frustrating tour for me, and I deeply regret my behaviour," he apologised in a statement released by the England Cricket Board.

While he made a successful comeback to the national side after completing his rehabilitation post the injury, Stokes was dropped from the team for the 2015 World Cup, which was a jolt for him after playing decently well against Sri Lanka in the series before the squad selection.

Under the leadership of Eoin Morgan, who was handed the reins a month before the World Cup, England succumbed to humbling defeats and failed to qualify for the knockout stages of the competition.

A dismal performance at the world event prompted a ring of changes with Andrew Strauss as the director of cricket and Morgan at the helm. England aimed to erase the memories of the World Cup and create a roadmap for the upcoming mega event at home.

With a plethora of changes in the personnel, Stokes made a comeback to the national side in a home series against New Zealand and smashed a half-century in his third outing.

There ain't any doubt that he was inconsistent in the first phase of his international career and managed to score only 282 runs in 19 innings at an average of 15.67. 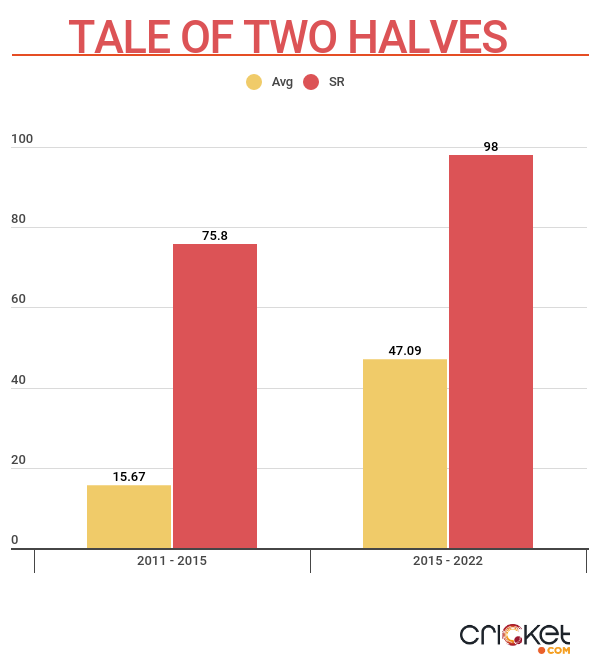 However, the all-arounder bounced back after the World Cup snub and amassed 2637 runs at an average of 47.09 since then to emerge as one of the mainstays in the middle order of the national side.

While an Irishman was leading England in a new era, a Kiwi-born player was shouldering the responsibility of England's aggressive brand of cricket with his exploits in the middle order.

With his all-around abilities, he was the perfect fit for England in their resurgence and emerged as one of the significant reasons behind their dominance in the white-ball format since 2015.

In the four years that followed, England broke numerous records in the fifty-over format and entered the iconic 2019 World Cup as the firm favourites to clinch the coveted title.

With dominating performances in the league stage, it was time for the summit clash at the Home of Cricket against arch-rivals New Zealand. In pursuit of 242 runs for the crown, England were 71 for three when Stokes walked in to bat.

Given the pressure of the run chase in a finale at home and the expectations of the fans after their destructive outings in the last couple of years, all eyes were on Stokes.

And guess what, he crafted his way to a sublime knock of an unbeaten 84 off 98 deliveries to help England draw the game from a situation where they were certain to falter.

"All the hard work that's gone in over these four years, this is where we aspired to be," he said in a post-match presentation as he guided England over the line to create history.

Three years to this glorious day in England cricket, Stokes has failed to recreate his magic in this format. He featured only in eight innings and scored 237 runs at an average of 29.3 after a year-long hiatus due to the pandemic and opting to take a mental break from international cricket.

One of the primary reasons for this was the route taken by the England management to manage his workload since he was part of the playing XI in all three formats. With the World Test Championship and the T20 World Cup in focus for the next couple of years, they opted to rest him from most ODI series to allow him time to recuperate after his finger injury.

While he made a comeback to lead the ODI team after a few squad members tested positive for Covid-19, the team management named a new-look 18-member squad to take on Pakistan at home with Stokes at the helm.

However, his finger injury continued to haunt him as he could not grip the bat firmly and was often guilty of throwing away his wicket while manufacturing strokes. It is fair to say it is absurd for a player to retire from a format at the age of 31, but given his workload and the future of the fifty-over format, Stokes’ decision is not all that surprising despite taking us aback at first.

While he will continue to enthral the fans with his skills in the Tests and T20Is, his farewell game at home will mark an end to a glorious era in England cricket in a format where he was the catalyst behind their resurgence.