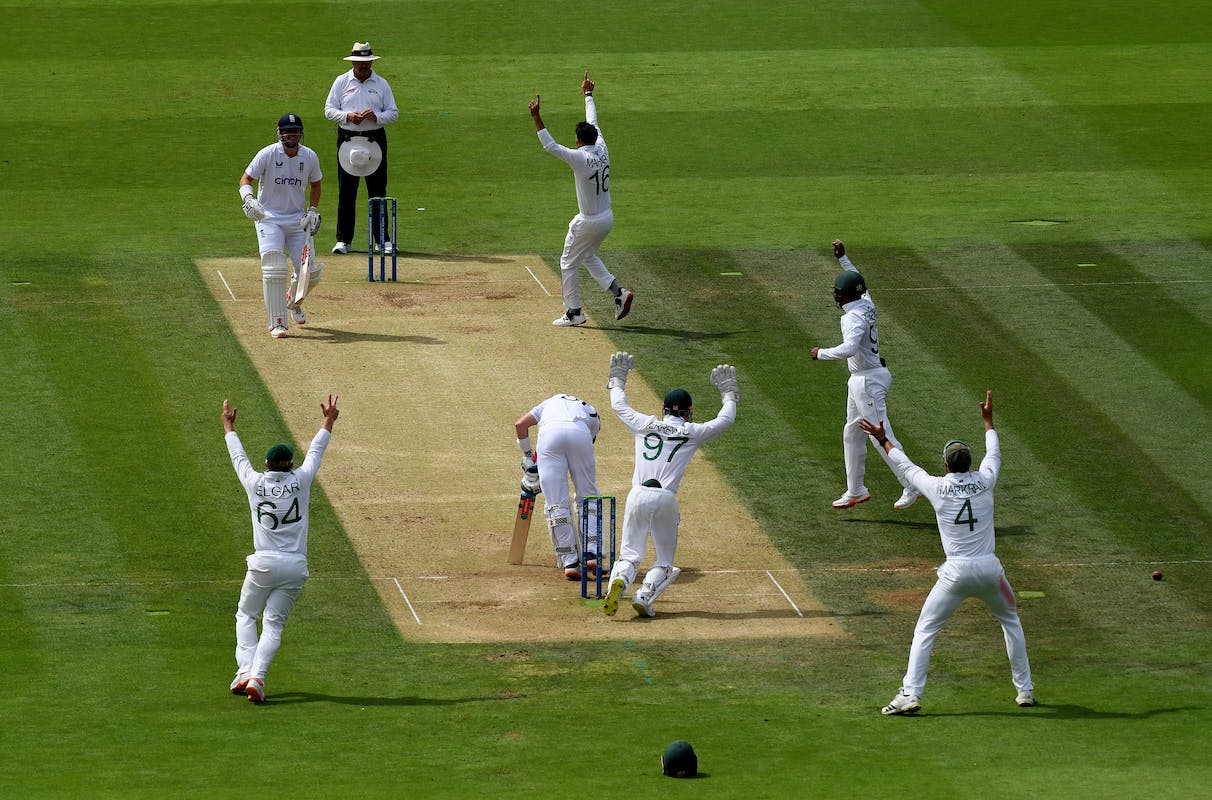 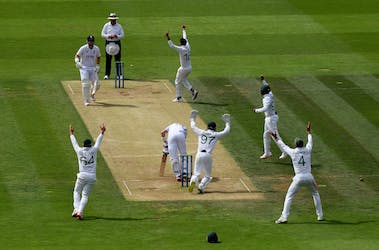 With the series on the line, Stokes and his side will hope to produce a dominant performance to come back after a thumping defeat at Lord's

The Home of Cricket was set for a classic showdown as England locked horns with South Africa in their bid to continue the Bazball momentum that dismantled New Zealand and India earlier in the summer.

With tempers flaring even before the first Test commenced on the rejigged style of play adopted by England, Dean Elgar said on Wisden Cricket Monthly, "The new England style is quite interesting, but I don't see that there's longevity in brave cricket."

To be fair to the South African skipper, he was bang on with his predictions as the Proteas quicks were far more superior to New Zealand and Indian pacers as far as stature and speed were concerned.

And on the first day of the much-awaited clash, despite rain dampening the spirits, South Africa rattled England and reduced them to 116 for six in the 32 overs of play that was possible.

The home team failed to recover from the early jitters and succumbed to an innings defeat, raising severe doubts about their attacking style of play, especially in challenging conditions.

With the game ending in less than three days, the hosts were handed an opportunity to sit back and think about their Bazball tactics and how they can cope against opposition with quality quicks in the arsenal.

On the other hand, South Africa have been the dominant side in the recent past and are sitting comfortably on the top of the World Test Championship points table.

Under the astute leadership of Elgar and Mark Boucher, South Africa have won six out of the eight Test matches in this WTC cycle and are the firm favourites to feature in the summit clash.

Elgar and his men will be itching to get one over England at Old Trafford, stamp their authority with an emphatic series win and announce to the world why they are one of the most underrated red-ball sides in recent times.

With stakes rocketing sky-high for both sides, it promises to be a blockbuster.

One of the most significant areas of concern for England since the retirement of Alastair Cook has been the lack of a solid opener coming through the ranks of county cricket.

While Zak Crawley and Alex Lees have been assigned the responsibility of opening the innings, the duo have faltered in the 16 innings they have batted thus far and scored 406 runs at an average of 25.4. 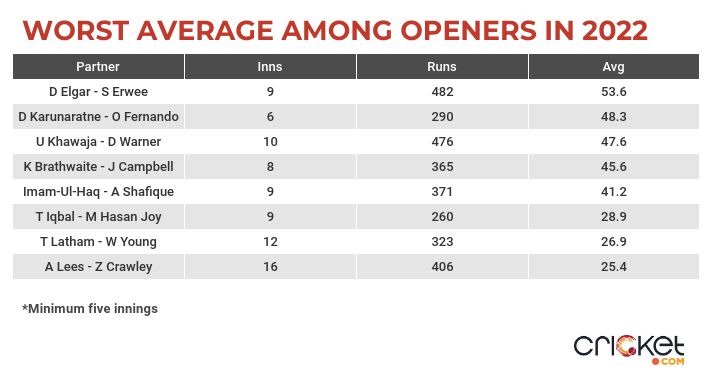 Among opening batters with a minimum of five innings this season, the duo are at the bottom of the table in terms of average, adding to England's woes at the top.

While Lees has still managed to produce decent knocks in the on and off, the scrutiny is on Crawley, who scored 497 runs in 20 innings at an average of 24.8.

Did England miss a trick by persisting with Broad?

Despite the focus being heavily on England's opening trouble with the bat, there is another area of concern for the home team heading into this must-win clash.

One of the nine England players to feature in every Test this summer, Stuart Broad's diminishing returns will have Brendon McCullum racking his brain.

The right-arm pacer has scalped 18 wickets in nine innings at an average of 35.6, which is the worst among England bowlers featured in four or more Tests this summer. 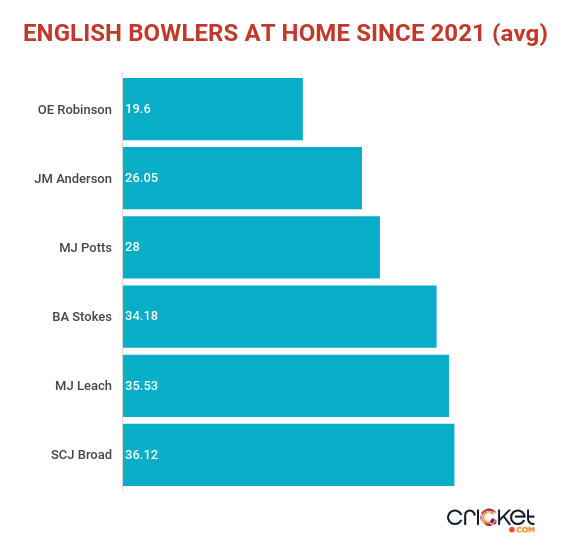 While the five Test matches are a small sample size for this argument, Broad has failed to create inroads since June 2021. In the eight Test matches played at home, Broad has a bowling average of 36.12 and a strike rate of 66.3, which is the worst among England bowlers.

A detailed analysis of the graph also helps us understand that Matthew Potts has been an integral part of England's success this summer and his exclusion from the side is a surprising call, to say the least.

Meanwhile, Ollie Robinson's inclusion was on the cards considering his lethal form at home as he scalped 28 wickets in five Tests against WTC finalists and strikes at 19.6.

The tall speedster has recovered from his recurring back injury and is waiting in the wings to unleash his array of deliveries that made life hell for the Proteas batters in the warm-up encounter against England Lions.

Potts missing out on the XI it makes us wonder if England made the right call by continuing to show faith in the veteran seamer despite his lack of form.

While the visiting side has most bases covered heading to Manchester, one player in their rank would be itching to get back into his usual form. The 2022 season has been challenging for Aiden Markram as the right-handed batter has struggled to find his rhythm in the longest format. 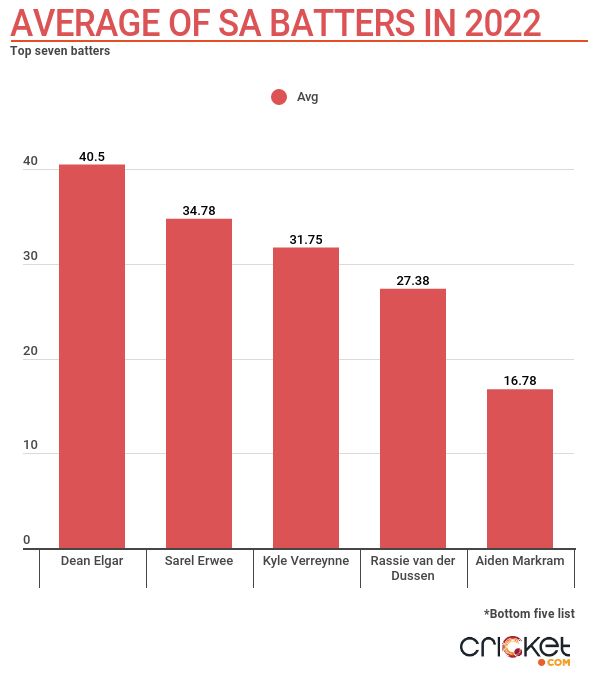 In nine innings, the 27-year-old has managed to score 151 runs at an average of 16.78, which is the worst among the top seven batters in the South African batting unit.

There ain't any doubt that Markram is way better than these stats suggest, and his return to form is the only minor chink South Africa would aim to rectify heading into this high-voltage clash.