Can RCB overcome the recent blues against a daunting Sunrisers? 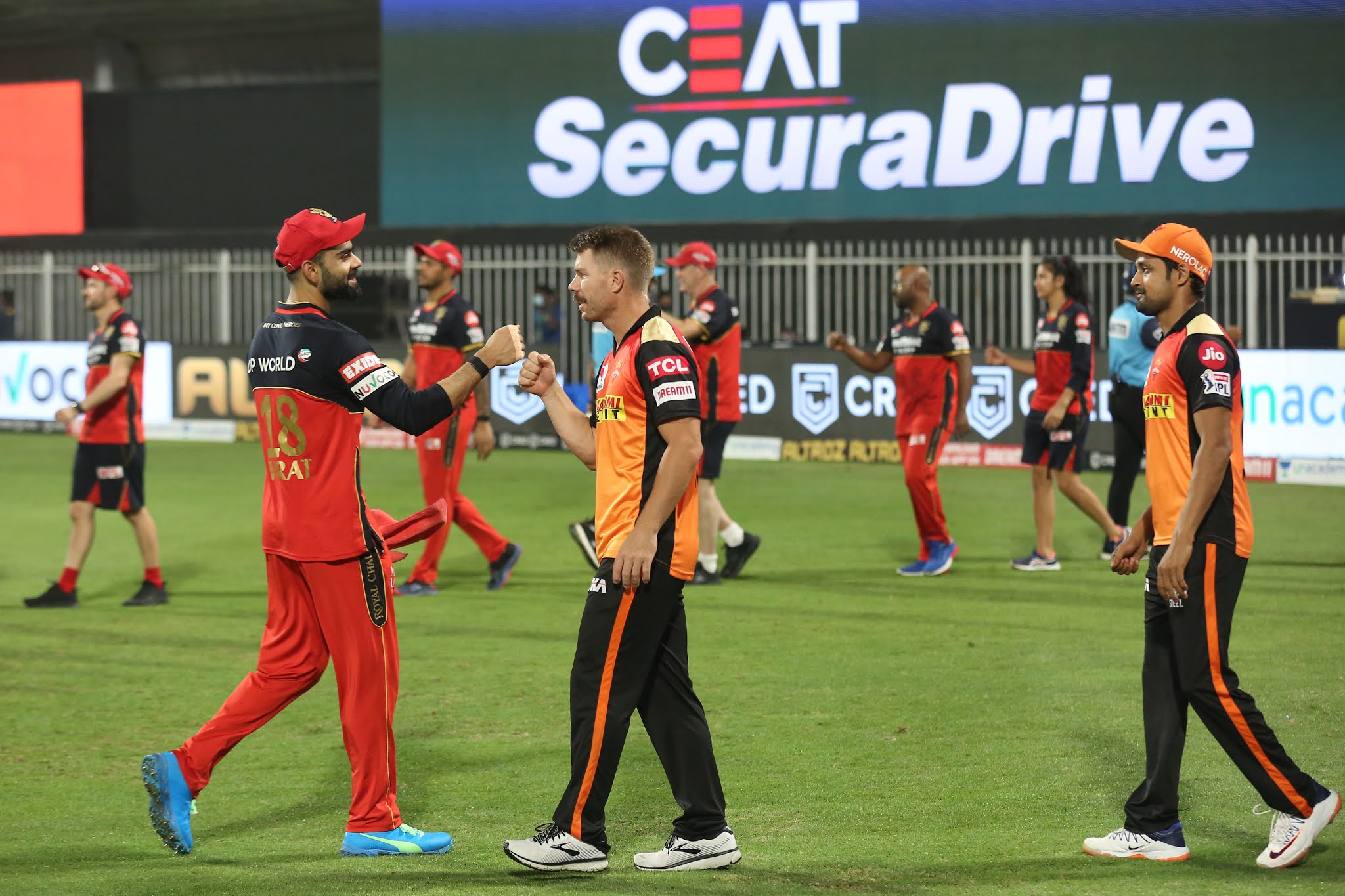 Can RCB overcome the recent blues against a daunting Sunrisers?

With three wins in a row, the momentum is with Warner’s men. Bangalore need their big shots to help break the deadlock in their most important game since 2016

The Sunrisers Hyderabad overcame a heart-breaking loss against Kings XI Punjab to beat the top three sides on the points table – Mumbai Indians, Delhi Capitals and Royal Challengers Bangalore to qualify for the playoffs. They now need to beat them again to win the IPL 2020.

SRH’s first hurdle, Royal Challengers Bangalore, did a most of the good work early and hence qualified for the eliminator even after losing four games in a row. While they seemed one of the more formidable sides this season at the halfway mark, their last four losses have been one-sided. Never once in those game did they seemed like a title-contender.

With most of the players in their squad tried and tested, chopped and changed, RCB do not have a silver bullet waiting to solve their recent issues. The best hope in their most important game in the IPL since the final of 2016, is to use the existing resources better.

Meanwhile, there was another, more potent issue brewing in the RCB set-up. At the end of 14 matches in the league stage, their openers have played with a rate of 7.2 runs per over, the lowest among all teams. Moreover, with 28 runs scored on an average by their opening pair, their conservative approach did not result in consistent big stands either. 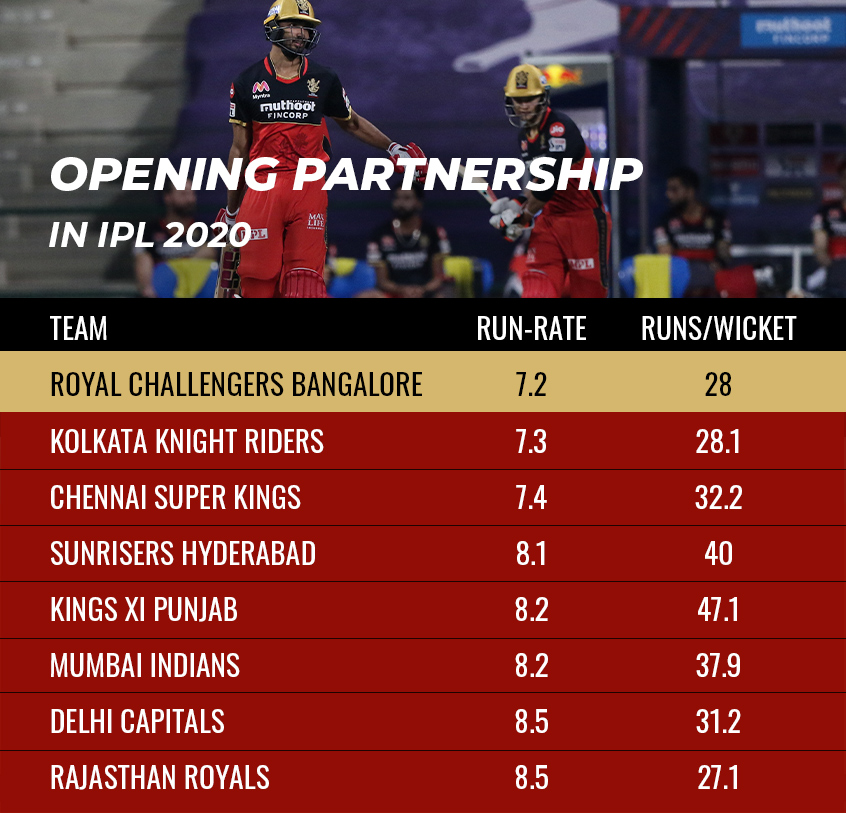 In the auction last year, RCB spent millions on Aaron Finch and Josh Philippe. Finch partnered with Devdutt Padikkal in the first 11 innings while Philippe has now opened in the last three. Neither of them has decent returns this season as so far. Finch has a strike-rate of 111.8 at the top of the order while Philippe has 106.9. Moreover, both have a strike-rate of around a 100 against pace which is even more worrisome as being Australians, they should have been accustomed to pace.

Padikkal has been the find of RCB this season. He has scored 472 runs so far at a strike-rate of 126.5. However, he has not found support from the other end. Looking at how the decision to open with Wriddhiman Saha overturned SRH’s fortunes, RCB might be tempted to give Parthiv Patel a go. However, this can be too risky in the eliminator as Patel has not played a game this season.

But, there is an available fix that can solve two issues for RCB simultaneously. Batting at number 3, Virat Kohli has played with a strike-rate of 110.1 and averages 16.5 balls per boundary – both are the worst among all batsmen with 100 or more runs in this phase. If Kohli decides to move to the position that has given him more success in the IPL, he can help himself and his side enter the middle-overs with a better start. 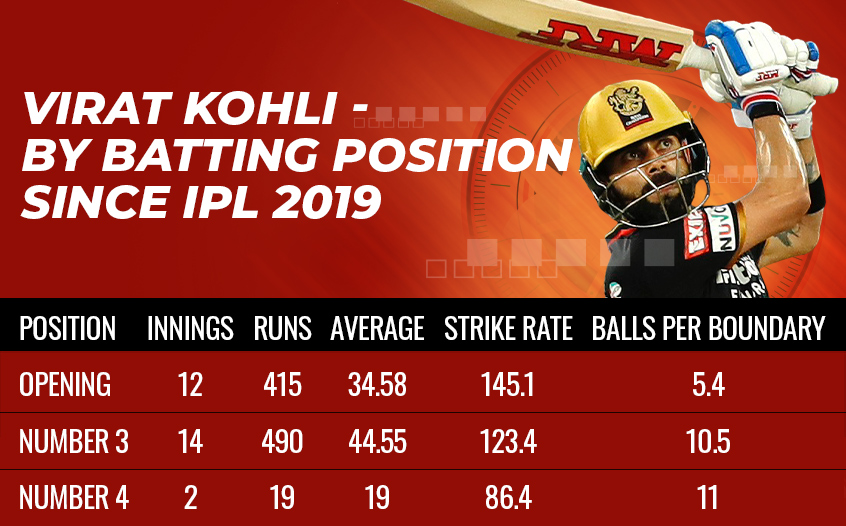 Moreover, this will allow RCB to draft in Moeen Ali, who can bat at number three and let Ab de Villiers be intact in his position at number four. A better player of spin and being a left-hander, Moeen can prove to be useful to counter SRH’s spinners - Rashid Khan and Shahbaz Nadeem.

The turn in SRH’s fortunes

SRH looked down and out this season after they failed to chase down 127 against KXIP. However, one change at the top of the order has given them three thumping wins in a row.

From a side whose rookie middle-order imploded in their first game this season against RCB, they became a side that chased down 121 in the reverse fixture against them in the 13th over.

Playing with absolute fearlessness, Saha boasts a strike-rate of 169.1 in the Powerplay, the highest among all players with a minimum of 40 balls. Moreover, his strike-rate propels to 212.5 against spin in the Powerplay which sets him up well to counter Washington Sundar.

Including Saha in the side has allowed SRH to use the clear-headed Kane Williamson in the middle-order. Also, the inclusion of Jason Holder has changed the dynamics of their side. He currently holds a record of 6.6 balls per wicket in overs 7-20, the best among bowlers with a minimum of 10 overs.

From RCB’s perspective, if they manage to get Saha out early, they will be able to make SRH move away from the template that has given them recent success.

Importance of toss at Abu Dhabi

One of the least discussed keys to success in cricket is the importance of toss. Especially in venues like Abu Dhabi where sides batting second have won the last eight night games.

As captains, Kohli has lost the toss in his last three games, while Warner won two out of three. Winning the toss might not guarantee a win, losing it can certainly set a side back in such an important game. With momentum having evaded them, RCB might hope that luck comes to their rescue.