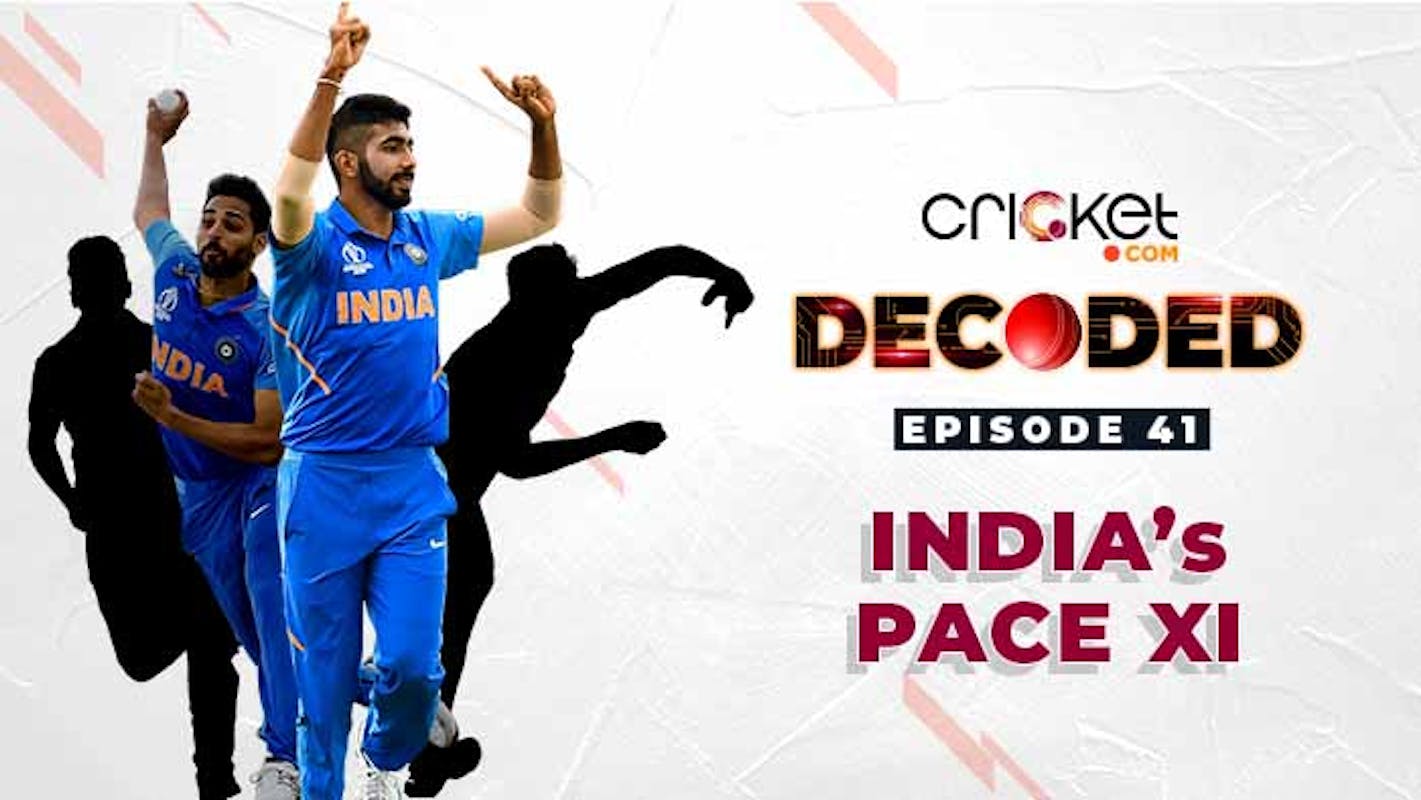 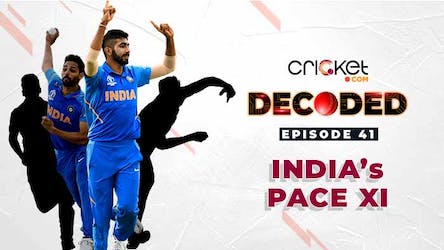 Jasprit Bumrah, Mohammad Shami, Mohammed Siraj and Shardul Thakur. Add Ishant Sharma from the previous years and a bit of Umesh Yadav. These are the only six specialist pacers who have played eight Tests or more for India since 2018.

This concise set of bowlers tells you that India have reached a point of certitude with their fast bowlers in Test cricket. However, the white-ball structure is far from it. There has been an unprecedented influx of pacers in Indian cricket and most of them are tried out in the white-ball format. None of the newbies have pressed their claim.

With two World Cups in the upcoming 16 months - one each of both white-ball formats - the time is nearing for the selectors to chalk down their best options. Among 11 options between the specialists, only Jasprit Bumrah guarantees a spot in both ODIs and T20 cricket. All other candidates have some positives and negatives linked to them. In this piece, we explore the same. Hardik Pandya is not considered in this space since he is a batting all-rounder. Besides, if he is bowling as well as he is now, there is no demerit attached to his credentials. 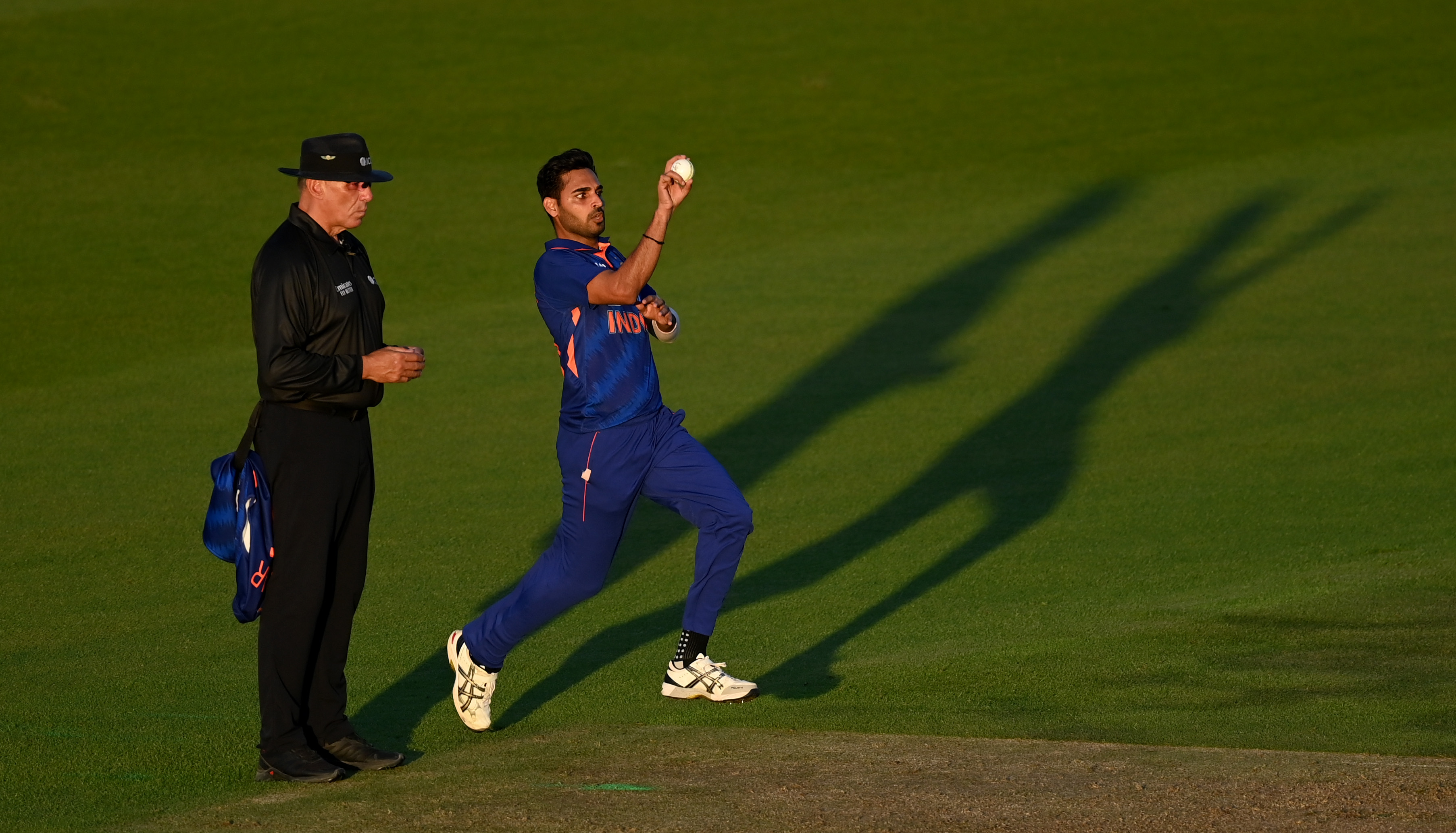 It is great news for Indian cricket that Bhuvi is back to his elements with the T20 World Cup inching closer. The veteran pacer has answered questions on all fronts - his fitness, his death over bowling and new ball wickets. At the start of the year, his spot in India’s T20 XI was a question mark. Now, Bhuvi is a certainty.

The same cannot be said about his ODI career though. The Meerut born last played ODI cricket in January, going wicketless in both games in South Africa. Since then, the selectors have only picked him for the shortest format. It could be a short-term goal, to keep him fit for the T20 World Cup. Hence, the question persists: does Bhuvi have the fitness for a 10-over spell in ODI cricket? Will he be part of the ODI setup again? We might get to know as the 50-over World Cup comes closer.

Harshal Patel has played most T20Is for India since the last T20 World Cup in November, 2021. The 31-year old has played only 17 games for India but overall, he holds an experience of 149 T20 games, seeing ups and downs in his career over a vast period of time.

Harshal has the full package of slower balls. He makes the ball almost stop in its trajectory like he is Keanu Reeves from The Matrix. But he also has a lethal dip on his deliveries that adds to the task of the batters.

His biggest upside is his batting. With Bhuvi in the side, he can deepen the batting resources till number nine. Moreover, he is a boundary hitter, reflected in his boundary percentage of 71.6 in T20s since 2021.

All these qualities frame Harshal as the leading contender to take the third seamer’s spot. But there is one little trick. He has been on a touch expensive side of late, especially in the death overs where he has conceded at more than 1 run per over than the previous two years. 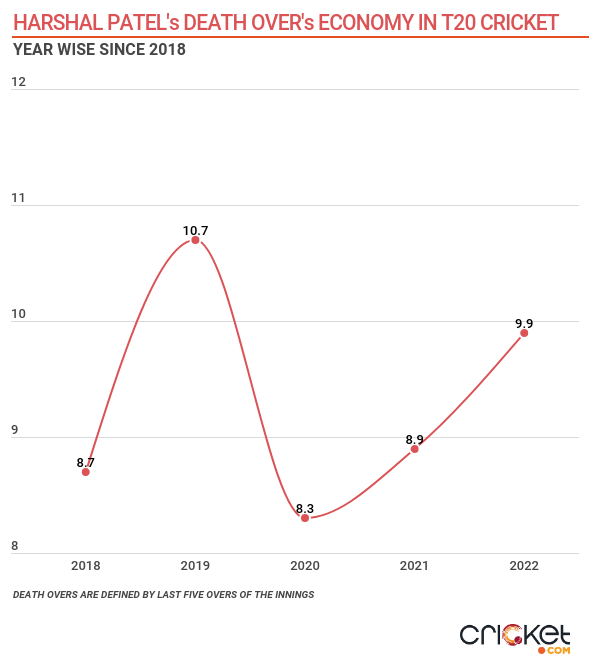 Also, India will compromise heavily on genuine pace with both Bhuvi and Harshal in the XI.  Harshal also isn’t a part of India’s ODI plans.

Arshdeep provides the luxurious left-arm seam bowling option. He has played only two T20Is for India, but going by the proceedings, he is a left-arm Bhuvneshwar Kumar. He can swing the new ball and bowl accurate yorkers as he has displayed countless times in the IPL.

India can pair both Arshdeep and Bhuvi for a riveting new ball spell. This will free up Bumrah to be used as a middle-overs’ enforcer and bowl at the death. Yet, the problem of genuine pace in the attack will persist.

On the ODI front, he is yet to make his debut. Rising up the ranks as the most promising left-arm seam bowling option in the country, there is a good chance that Arshdeep will get his maiden ODI cap soon.

One of the three prime contenders to become India’s third-seamer in the World Cup, Avesh instills pace in the attack. He can consistently clock 140 kph+ deliveries. He can swing the new ball and possesses the slower ones as well. The 25-year old is one of the most complete bowlers in the domestic circuit, as he showcased in the 2021 IPL season, picking 24 wickets in 16 games at an economy of 7.4. The blockbuster season with Delhi Capitals put him in contention for the India cap.

However, execution has been an issue with the right-arm seamer this year. In nine T20Is thus far, Avesh has an economy of 12.1 in seven overs without a wicket. Hence, he doesn’t bring much confidence as a death bowling partner for Bumrah.

Avesh may or may not get picked for the World Cup but will stay in India’s white-ball setup based on potential. He recently made his ODI debut in West Indies. It didn’t go according to the plan (0/54 in six overs) but at his best, he can be an asset.

2022 has been a forgetful year for Shardul Thakur until now. He has made it to every XI - Test cricket, white-ball cricket for India and IPL - based on his all-round potential and hasn’t duly stepped up in any regard. 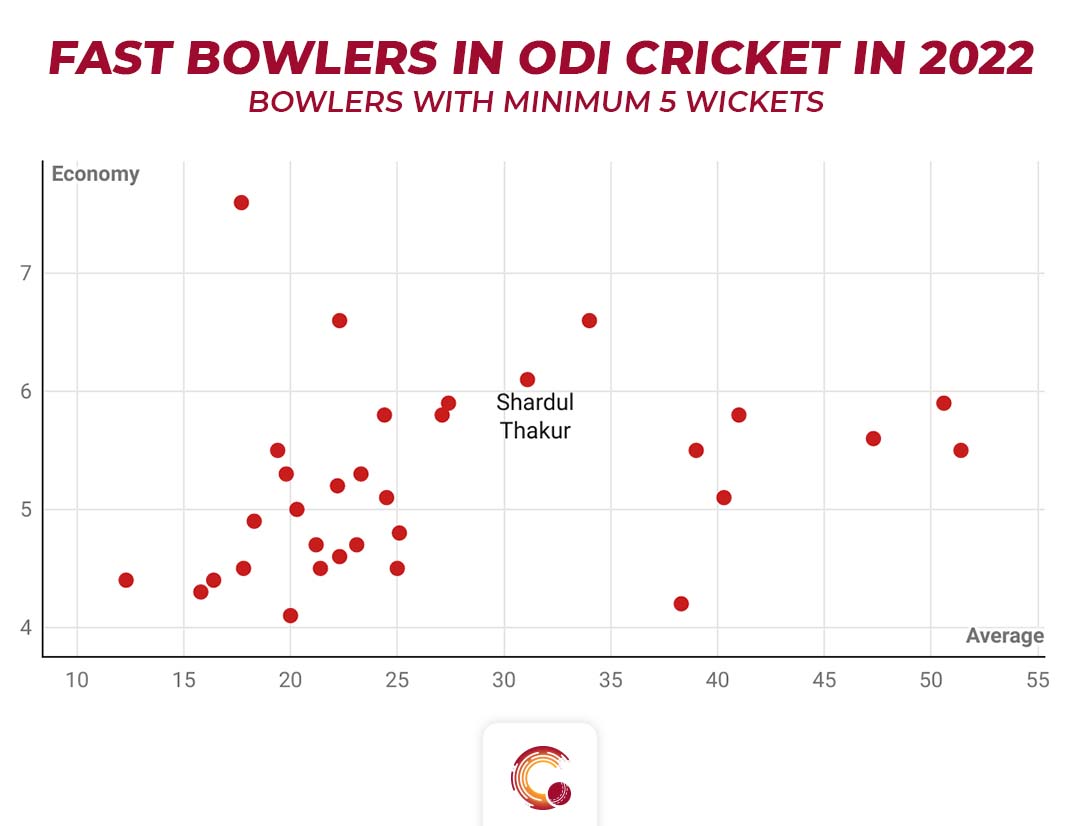 He is renowned as the partnership breaker but an overall bowling average of 35.3 in ODI cricket tells you otherwise.

Thakur could have been a valuable resource for India as a seam-bowling all-rounder. Instead, he is trapped by his own limitations.

Malik burst onto the international cricket scene rattling batters in IPL with his 150 kph+ thunderbolts. It was obvious for the Indian management to get excited and draft him in the national setup. However, an economy of 12.4 across three games suggests he has work to do on his control.

Malik’s omission from the five-match T20I series in West Indies is an indication that he might not be a part of India’s plans for the upcoming World Cup. Meanwhile, he has played only one List A match which keeps him away from an ODI cap for the time being. Although, such is the x-factor in his game that he should be back in the squad soon.

Siraj is one of the few seamers who has been consistently with the side across formats in the last two years. Yet he has featured in only a handful of white-ball games for India - five T20Is since his debut in 2017 and eight ODIs since his debut in 2019. Seven of these ODIs have come this year, when India haven’t fielded their optimal pace attack.

Unfortunately, the opportunities have coincided with a year when Siraj’s numbers have gone through a blip. IPL, the only white-ball tournament Siraj has consistently played over the years, serves as the sole yardstick to confirm this. 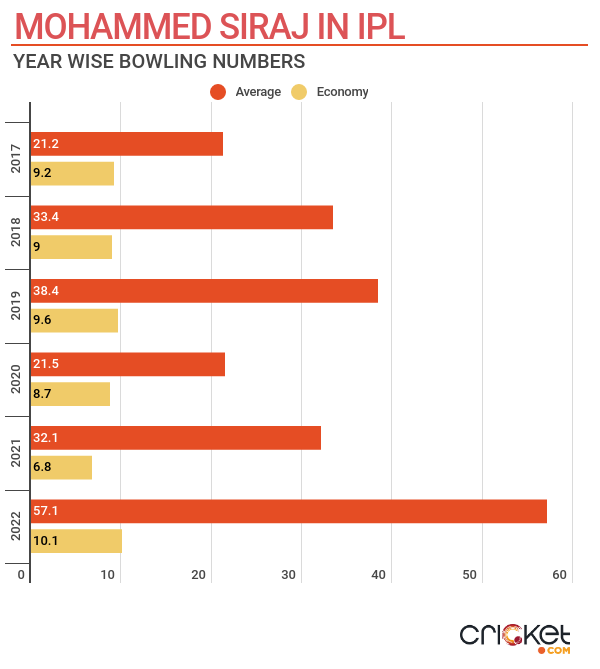 There was a general consensus around Siraj when he began his white-ball career. He was deemed to be a more potent red-ball bowler owing to an open chested action and ability to hit the back of a length. Consequently, he has played a lot more Test cricket now.

The poor season in IPL 2022 has pushed him back in the race for the T20 World Cup. In ODIs, his strength lies in extracting lateral movement from the new ball.

Siraj ended his string of ordinary performances during the ODIs in West Indies where he was the spearhead of the pace battery in the absence of both Bumrah and Bhuvi. Going by the current scenarios, it seems like we will see Siraj a lot more in Tests and ODIs rather than the T20Is.

Krishna is a tall, lanky pacer who generates extra bounce and bowls in the probing channel outside the off stump. When most frontline quicks have been rested from the 50-over format, he has played most matches for India in the format among pacers. It shows the interest of the Indian management in Krishna’s skills.

Krishna has undergone some poor matches of late but 21 wickets in 12 matches reflects his wicket-taking ability. He is a handy resource on bouncy tracks which may make you think he must be in contention for the T20 World Cup Down Under. However, no T20I matches for him suggests he hasn’t been seen as a T20 prospect thus far.

At the start of the year, Chahar was a rising prospect as a seam-bowling all-rounder. He was picking wickets with the new ball. In fact, he was a replica of Bhuvneshwar Kumar, albeit, he needed to nourish his death overs bowling further. He was also scoring vital runs down the order. A hefty paycheque in the 2022 IPL auction approved of Chahar’s all-round credentials. 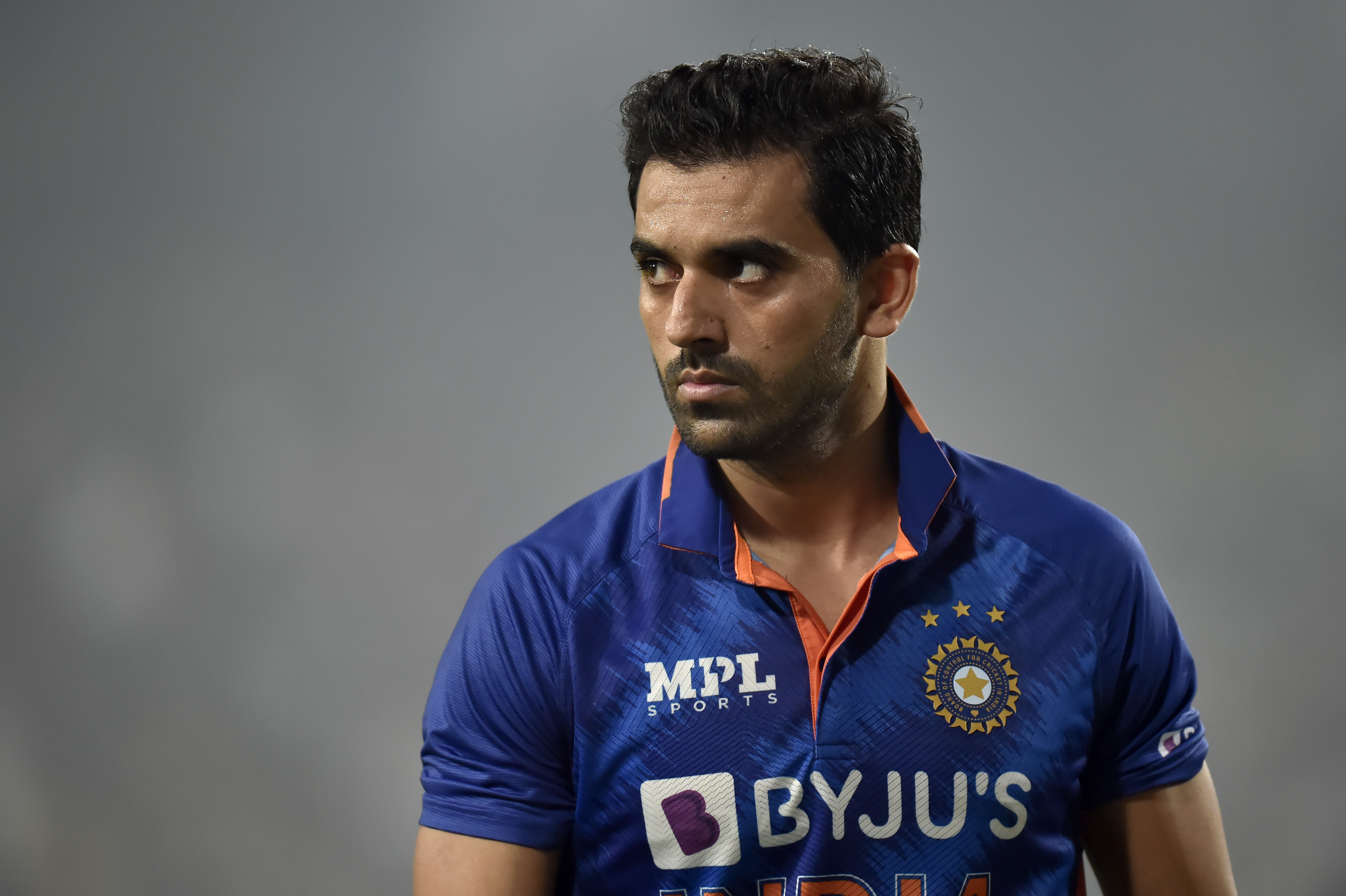 His fortunes took a dip with a back injury that has kept him away from action for the last five months. Otherwise, he could have presented a strong case for the T20 World Cup.

Chahar is back for the ODIs in Zimbabwe. As a seam-bowling all-rounder who takes early wickets, one can always expect him to be in the mix with the national team. If Bhuvi is not available for ODI cricket in the near future, Chahar is a replacement in progress.

For now, he has fallen behind in the race for the T20 World Cup but could be back in the shortest form too afterwards. All of that is possible if his fitness persists. Hence, the upcoming series in Zimbabwe becomes critical for him.

Shami hasn’t represented India in T20 cricket since the T20 World Cup last year. Only 17 T20Is between his debut in 2014 and his last match in 2021 indicate he never had a consistent presence in India’s T20 blueprint. IPL has kept him relevant but Shami’s expertise lies in picking wickets with the new ball, a department where India have many options, including Bhuvi who has sealed his spot. When it comes to the death overs, Shami is largely hit and miss.

Even in ODIs, the right-arm seamer has played only three ODIs in the past two years - all during the three-match series against England earlier this month.

Shami holds a decent ODI record. The sporadic appearances in 50-over cricket is a consequence of his workload management given he is a regular in Test cricket. With no World Cup in sight for four years, the selectors opted to try new faces. Shami may not add to his 17 T20I caps but it won’t be a surprise if he is back as the 50-over World Cup inches closer next year.

*All stats until the first T20I between West Indies and India