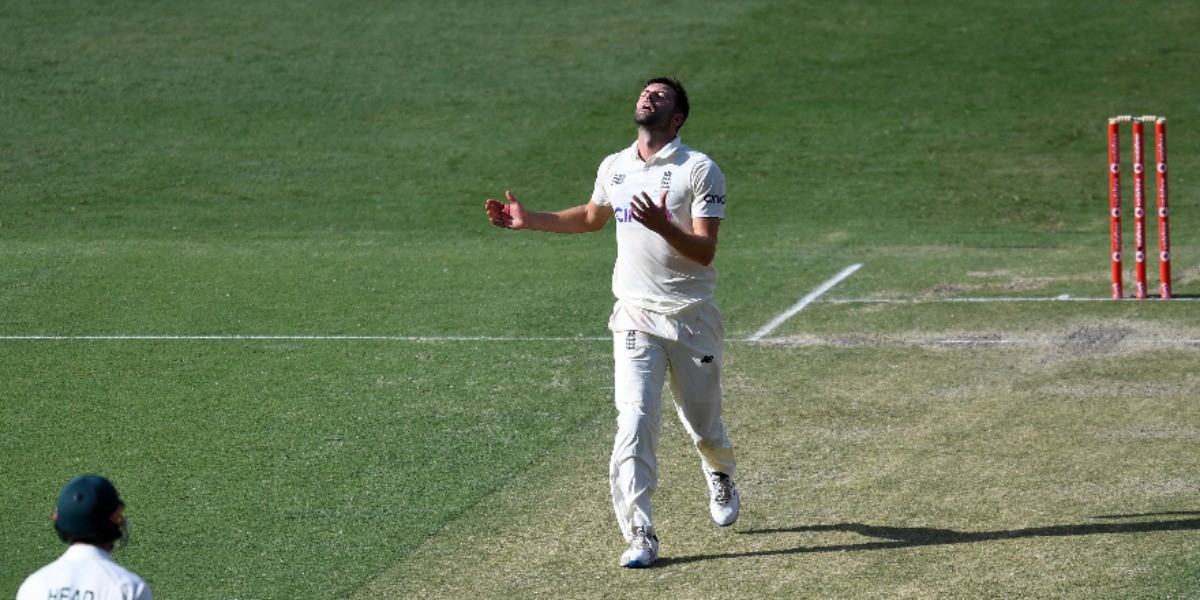 The English seamers put up a commendable showing on Day 2, but it will mean little in the bigger picture

About four and a half hours into the start of play, the English players would have been forgiven for thinking that they’d been cursed. For everything, absolutely everything went against them up until that point.

This apparent conspiracy started even before the first ball of the day was bowled. The English bowlers, overnight, would have been hoping for a nice cloud cover to start the morning off but there was not a single cloud in sight when the two Australian openers walked out to bat. The sun was belting down at the Gabba and the conditions were perfect for batting, after they’d been the exact opposite just 24 hours before.

But things would soon get a whole lot worse immediately after they took to the field.

Warner, as described on air by Allan Border, carried enough luck with him to be able to try his luck out at winning the lottery. In his first 117 balls he got three clear reprieves - including a dismissal of a no-ball and a dolly of a dropped chance - and looked like he would not be able to get out even if he tried.

Apart from the clear lives, he had numerous plays-and-misses and edges that either evaded or did not carry to the slip fielder, and at times his luck rubbed off on Labuschagne too.

And as if this wasn’t enough, England were further cursed by an injury to Ben Stokes, which rendered him unable to bowl regularly from the 24th over of the innings onwards.

England have historically had some forgettable days with the ball in Australia, but they genuinely could not have been blamed had they decided to check out before tea today, when Warner and Labuschagne had made the most out of their luck and were in the mood to manhandle all the bowlers.

But this team isn’t here to give excuses, and the same was evident through the way Ollie Pope carried himself in the press conference at the end of Day 1. Pope refused to buy into the argument that the batters were hard-done by Root’s decision to bat first, and was adamant that England were still alive despite the sub-par batting performance.

"We'll keep fighting and we have to see both sides bat on this wicket. We don't know how it's going to react tomorrow and we'll come back stronger,” he said.

On Day 2, they did not have the rub of the green, or the conditions, but boy did they fight.

For all the talk of how it was a blunder to leave out both Broad and Anderson, the English seamers were right on the money for most parts of the day. In particular Ollie Robinson and Mark Wood, who constantly asked questions of the Aussie batters in conditions where Broad and Anderson have historically been put to the sword.

Robinson was the pick of the bowlers with three wickets, but he could very well have had four had Burns not put down a sitter.

He drew first-blood for England by removing Marcus Harris, and, making full use of his height, tormented the batters throughout the day by pitching the ball at an uncomfortable length and angling it in and away.

Statistically, Robinson was the third-best bowler in the game, drawing a false-shot percentage of 18.5% while beating the bat more often than any other bowler in the match, and it was his double-strike post tea that stopped Australia from running away with the game. 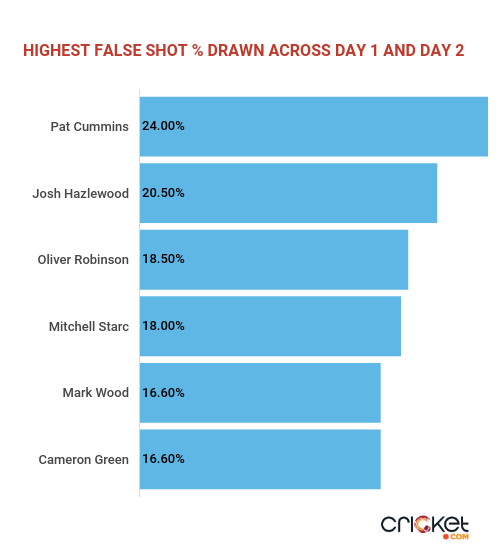 Wood did not beat the bat as often as Robinson, but, throughout the course of the day, he provided England with that x-factor they’ve missed Down Under in the years gone by. In three separate spells he rattled Warner, and was really unlucky to not get the better of the southpaw. But he got his reward in the form of the wicket of Steve Smith.

Smith looked fidgety throughout his short stay, and a snorter from a good-length from Wood, which angled in, climbed on the batter and left him ever-so-lately, proved too good for Australia’s talisman. Technically, in his first Ashes game since 2015, Wood managed to achieve something no English bowler has been able to do in the past four years: dismiss Smith cheaply in the very first innings of an Ashes series.

Woakes was the least threatening of the English seamers, but, despite not posing the same threat as the other two, he ensured to keep things tight, conceding at 2.30 runs an over. Woakes is someone who carries many a deep scar from the past, but his showing today was a marked improvement from some of his outings in the years gone by.

And yet the grim reality is that, despite this seemingly spirited showing, Root and his men will head into day three 196 runs behind. Despite a commendable effort from the frontline seamers, two things haunted England on the day: one, the injury to Stokes and two, the horror-show from Jack Leach.

Stokes’ injury - which allowed him to bowl just 9 overs on the day - meant that Root was not free to rotate the seamers as he would have wished, and this problem was exacerbated by the showing of Leach. 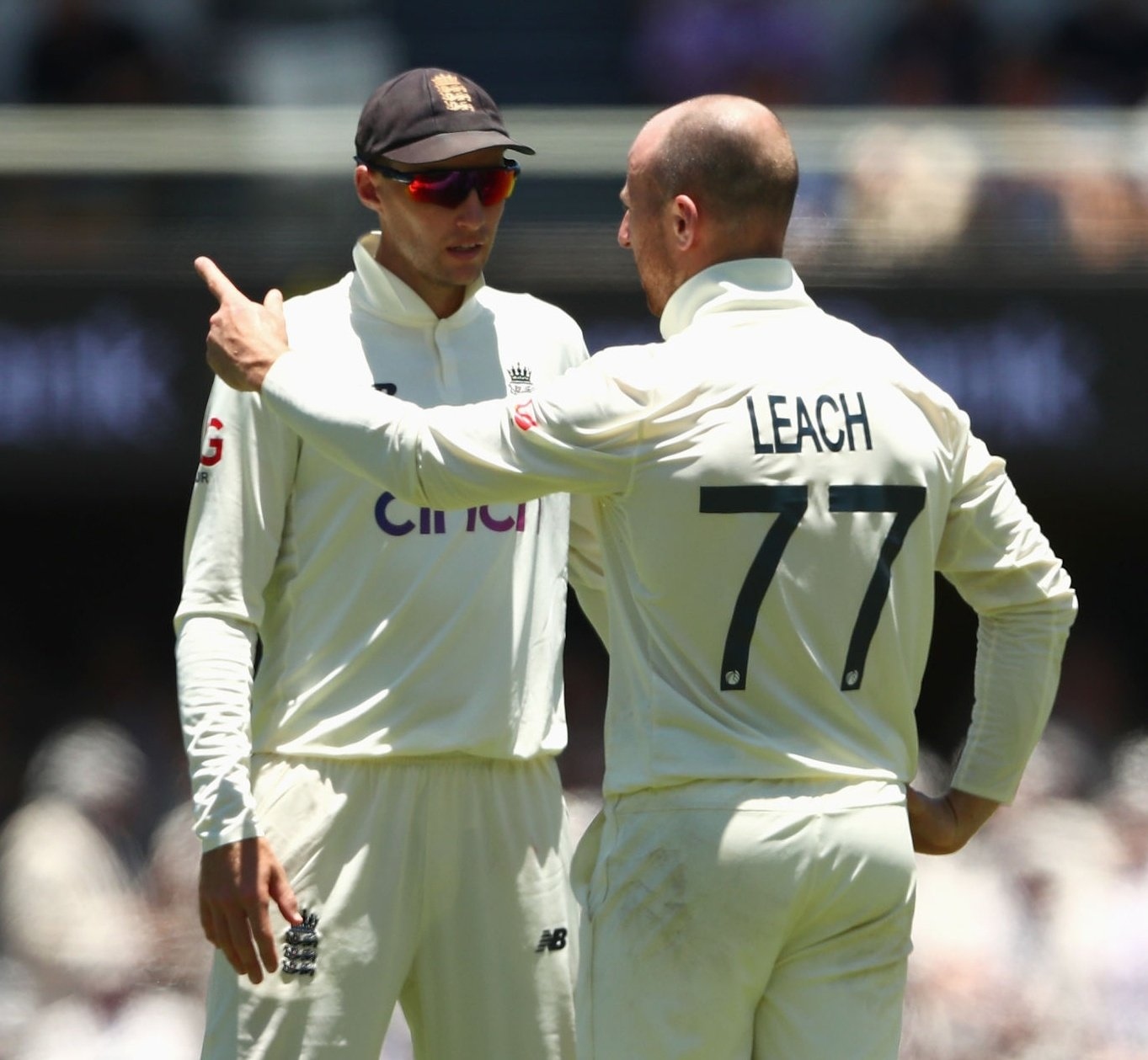 Root, in a perfect world, would have hoped for Leach to bowl 20+ overs at a tight rate which would have enabled him to use his seamers in short bursts, but Leach being taken apart for 95 off his 11 overs by the Aussie batters, who consciously treated the left-arm spinner with zero respect, ended up throwing a huge spanner in the English skipper’s works.

It meant that he needed to keep bringing back his frontline seamers in the final session even when they were gassed, and it played right into the hands of Travis Head, who obliterated a tired English attack post-Tea to take the game away from the visitors. Make no mistake, Head played one of the great counter-attacking knocks in recent times, but he was undoubtedly aided by the tired legs of the English bowlers, who were fully done an hour into the final session.

How Stokes’ injury will affect England’s plans going forward remains to be seen, but you cannot help but feel that we might not be seeing too much of Leach again in the series. It is one thing being expensive as a spinner in Australia, but there is no justification for conceding at 8.60 runs an over, no matter how aggressive the batters are.

Leach failed his big test today, and, going forward, one suspects that it won’t make too much sense for England to pick a seamer less to accommodate the left-arm spinner, especially when he was out-bowled by his skipper on the day.

But when the dust settles, Root will know and understand that it is because of the batting on Day 1, and not the spell of Leach, that England find themselves where they are currently, having effectively lost the game.

Ahead of the series, there was plenty of emphasis on the need for England to post massive first innings scores in Australia in order to remain competitive, and by now, Root must have realized why.

Ultimately, this is not England where bowlers can rescue the team once the batters post below-par scores. This truth was laid bare today as the likes of Wood, Robinson and Woakes saw themselves receive zero reward for their efforts.

From England, there was no shortage of fight with the ball today. But unless and until their batters start showing the application that their seamers did on Day 2, they will be playing catch-up, no matter the conditions.