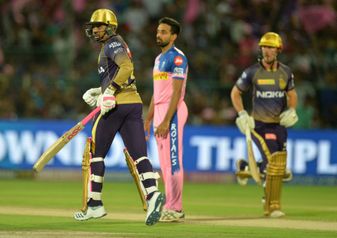 KKR ended up winning the match with 37 balls to spare.

Chris Lynn and Sunil Narine’ entertaining first wicket partnership hands Kolkata Knight Riders (KKR) a comprehensive 8-wicket win over Rajasthan Royals (RR) in Match 16 of the Indian Premier League (IPL) 2019 at Jaipur. With this win, KKR dislodge CSK from the top on Net run-rate. RR on the other hand are just above Royal Challengers Bangalore (RCB) at seventh place. Shreyas Gopal continued his good form with the ball for RR, dismissing Narine and Lynn in quick succession. But, the damage had already been done as the KKR openers put on a match defining 91-run stand for the first wicket off just 51 balls, which was completely in contrast of the way RR went about their innings. Thanks to that partnership, KKR won the match with 37 balls to spare, which will do their net run-rate a world of good.

Had Rahul Tripathi taken a sitter in the fourth over when Narine was batting, RR could have put up a better fight. But once that chance went to ground, RR never looked like bouncing back.

With spin on offer at the Sawai Mansingh Stadium, RR stocked themselves with another spinner in the form of S Midhun. The move back-fired as they did not have enough runs on the board to defend. Steven Smith stood tall for the men in pink, but his unbeaten 73 off 59 went in vain as none of the other batsmen got into any sort of rhythm and as a result, did not score at a brisk pack. Although Narine, Piyush Chawla and Kuldeep Yadav did not pick up a single wicket in the match, their 12 overs yielded just 74 runs. Debutant Harry Gurney was the pick of the bowlers for the visitors, finishing with figures of 2 for 25 from his four overs.

In the end, it was a professional performance from KKR, who will take on Chennai Super Kings (CSK) in their next match on Tuesday. RR too will face the defending champions in their next game, which will be on Thursday.

Following the early wicket of Ajinkya Rahane, RR’s win % took the highest dip – 10%, which is the most for their entire innings. However, when RR scored 12 off the 15th over from Prasidh Krishna, their win % went up by 8 to 49%, which is the maximum it reached throughout the game. 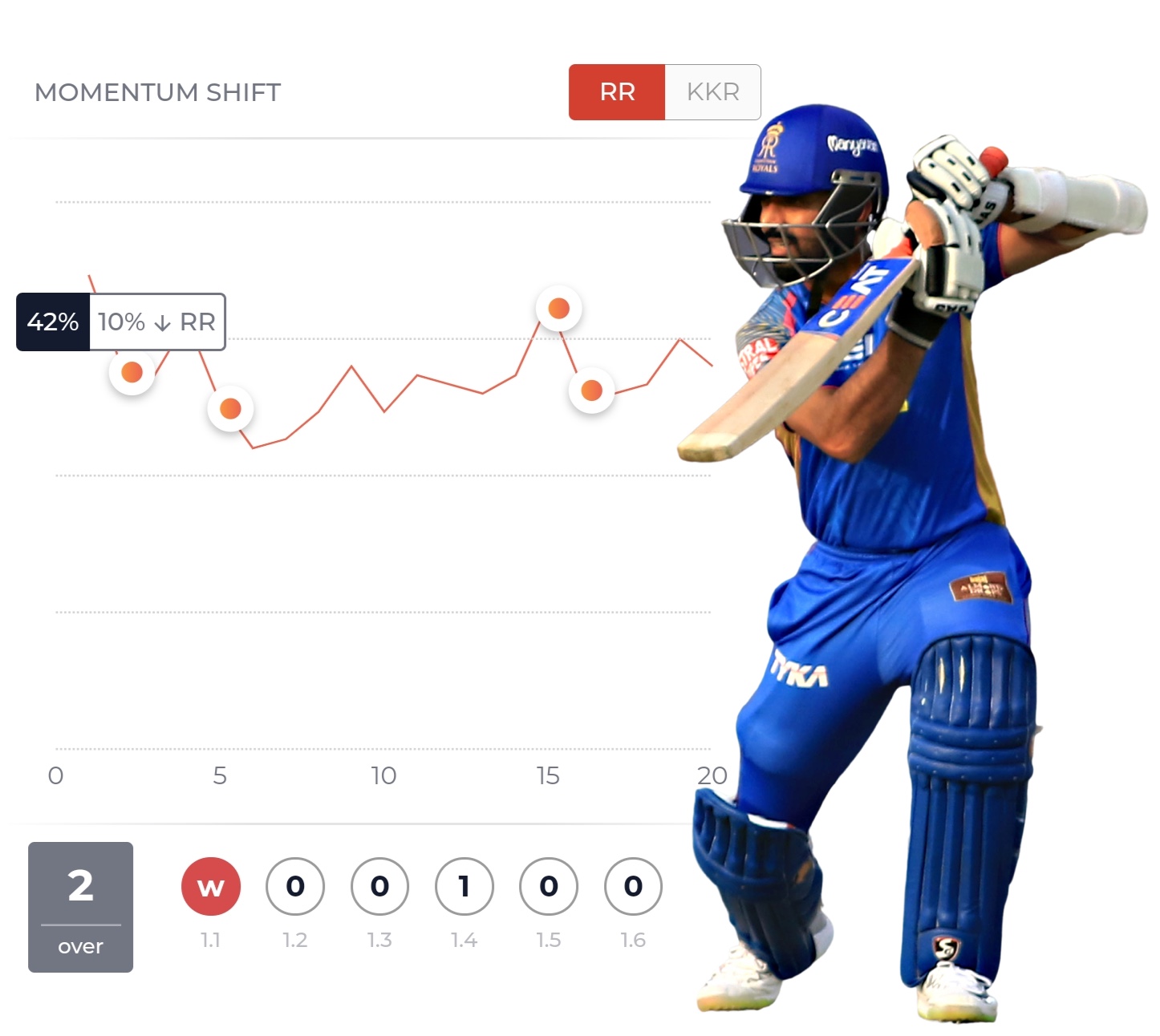 As far as KKR are concerned, after Narine scored 22 runs of Krishnappa Gowtham’s first over, their win % went up by 22 to 85%, but dropped down to 83% after Jofra Archer conceded just four runs in the next over. But after a 16-run 8th over off S Midhun, KKR’s win% reached 96% and did not go down from there. 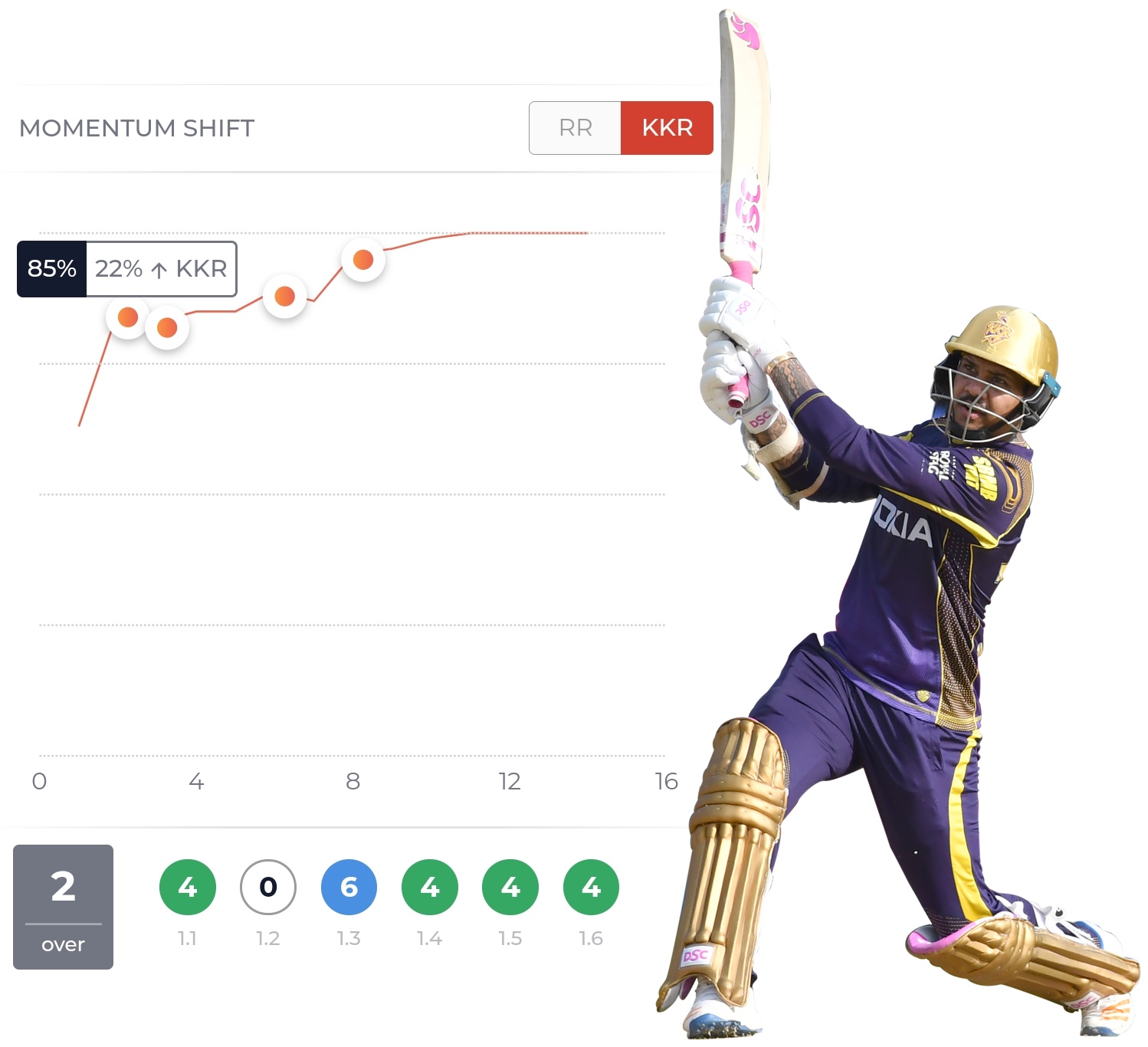 For more such analysis, check out the Criclytics section of our website.