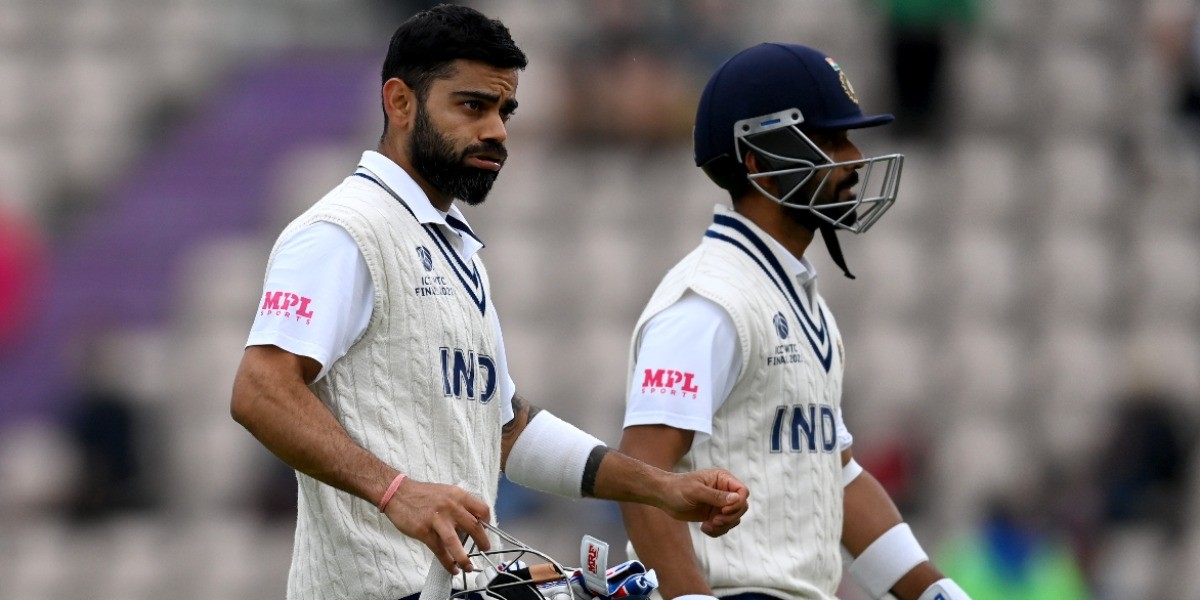 The stop at 64.4 overs was the last straw, with the officials finding it too hard to continue afterward

Tim Southee to Rohit Sharma, inswinger and on the pads. Rohit flicked that through square leg for three runs. The first ball of the day seemed the aptest start to the World Test Championship final at the Ageas Bowl to set up the narrative. Rohit was a prolific run-scorer on the pads while Tim Southee had only four wickets against the right-handed batsmen through inswingers at an average of 58.5 in the current WTC cycle as compared to seven wickets through balls moving away at 23.7. It was like feeding the mighty shark with a whiff of a claret.

The discipline that the Indian opening combination of Rohit Sharma and Shubman Gill showed today was contagious in the first hour. New Zealand, who fielded an all-pace attack, bowled as many as 62% of their deliveries on good length spots in the first couple of hours to check the run-scoring rate but the Indian duo were happy to let them go. Gill left 50% of his balls in the first hour - the most he has done in the first 20 balls of his career.

From a New Zealand perspective, this was quite an ordinary couple of hours. A team, whose trio of Southee, Boult, and Jamieson bagged 93 wickets together at an average of 19.3 and strike rate of 42.6, needed an enforcer who could do the job. Jamieson was rushing the duo and in a moment of heat, Rohit committed an error of poking to an away-going delivery.

At 62-1, Gill was joined by Cheteshwar Pujara in the middle and the memories of Australia came rushing through where the pair struck unlikely chemistry despite their confined binary. With the wicket not doing much, it was naturally expected of Gill to learn from Rohit’s mistake, but with a bowler of the skill level of Neil Wagner, you better be content at your own peril. After swinging into Gill on the first ball, Wagner changed the angle slightly as the cherry held the line to extract an edge of the Punjab opener. 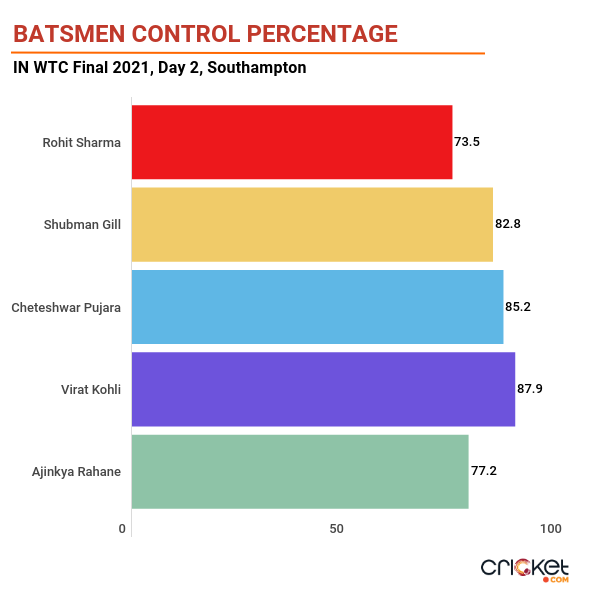 From a position of comfort, India were suddenly reduced to 62/2. In such a situation, India have their crisis man stalling upfront. After taking 36 balls to get off the mark, the Indian No.3 played a fantastic cut to Wagner behind point before hitting another pristine cover-drive on consecutive deliveries. It changed the momentum a fair bit at the start of the second session.

In the recently-completed England and New Zealand series, against Colin de Grandhomme, batsmen had a control percentage of 87.1 percent, the highest for a bowler. Thus one would’ve been rightfully wondering about him being at the forefront of the attack in the second session, but given Virat Kohli’s propensity to hurry on the front-foot against medium-pacers, it made perfect cricketing sense. Kohli was duly stuck in one end against CDG but never really looked in trouble.

When Williamson brought Boult back in the attack, it changed the dynamics way too suddenly. Pujara found himself caught in two minds as a massive inswinger brought him forward and hit the back leg in line with the middle and leg, leaving India in tatters at 88/3 in 40.2 overs with the skipper and his deputy being in charge.

Multiple stops due to bad light ensued. Any other batsmen would have lost their concentration but not Kohli or Rahane. They seemed completely calm and were in full charge of the narrative. Even though Tim Southee beat them four times in a row with a set of inswingers and outswingers, they were happy to leave that alone. Rahane took charge when the ball was in his zone, pushing his skipper to run those risky couples and threes. It reaped dividends with the scoring rate never going down despite multiple stops.

The stop at 64.4 overs was the last straw, with the officials finding it too hard to continue afterward. However, as a piece of good news for fans, Day 3 forecast promises to be better, with little to no rain in the first two sessions of the Day.