RCB eliminated as 'Kalm Williamson' sees through a jittery chase 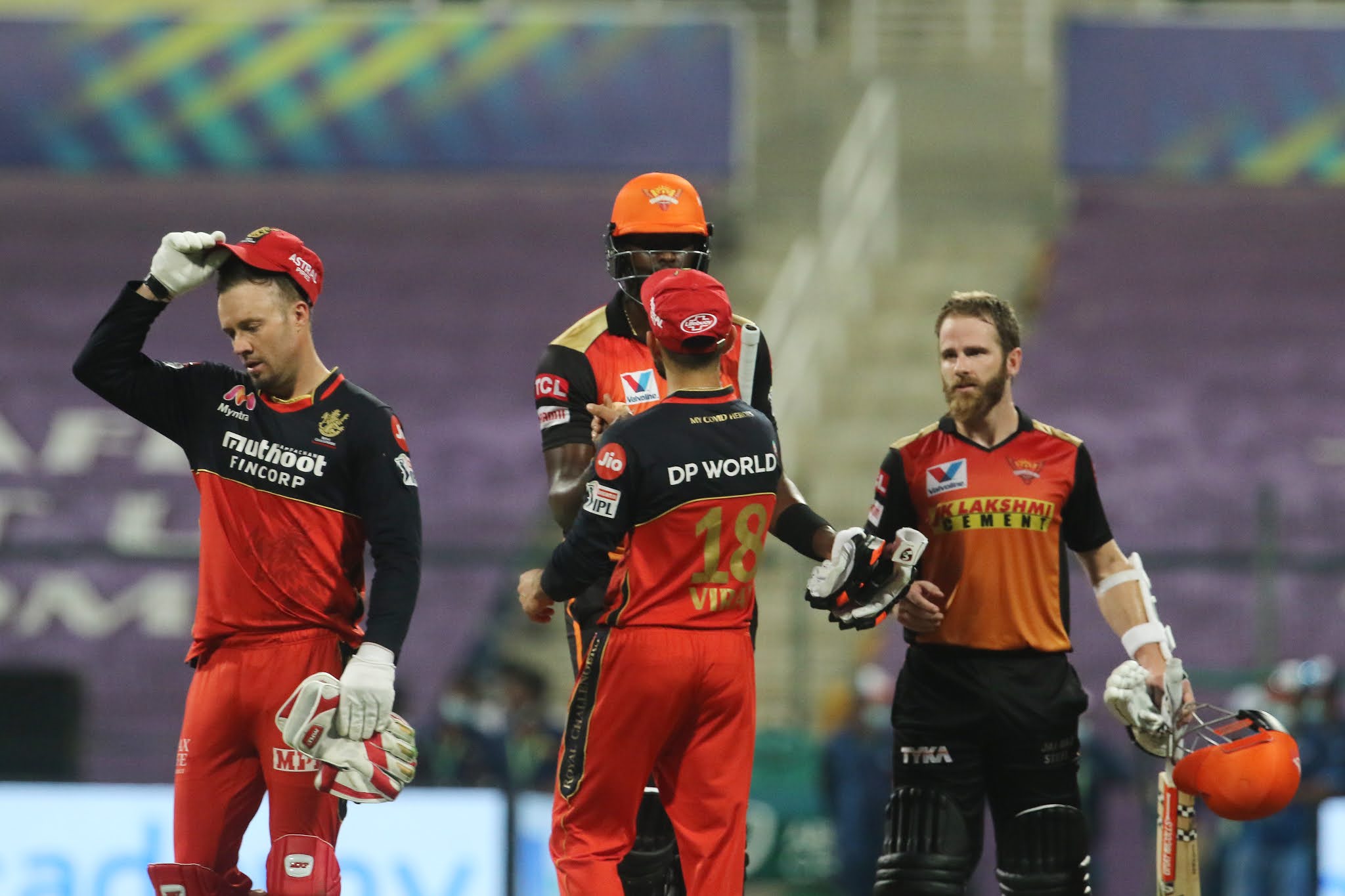 RCB eliminated as 'Kalm Williamson' sees through a jittery chase

After taking three wickets with the ball, Jason Holder contributed with a 24*(20) to stitch an unbeaten 65-run partnership with Williamson

The Eliminator of the IPL 2020 seemed like a dull affair at the halfway mark. However, after having almost conceded the game while batting in the middle-overs, Sunrisers Hyderabad fought back to live for another day in the tournament.

For decades, no other player enjoyed the support of neutral fans as much as AB de Villiers and Kane Williamson. Tonight, both stood tall for their respective sides.

However, only one of them will walk out to satiate his fans again in IPL 2020.

Chasing a moderate 132, it seemed like the SRH are on their way to a result similar to their implosion against Kings XI Punjab. The difference was that tonight they had a weapon they did not possess then: the calm head of Williamson.

Losing David Warner before the end of the Powerplay and Manish Pandey just after it derailed SRH’s run-chase.

The Kiwi skipper weathered the storm during the middle-overs when the spinners of Royal Challengers Bangalore choked SRH with a mere 39 runs in the nine overs from 7 to 15. While the dot balls were piling up and the boundaries dried out, Williamson was unperturbed.

When SRH needed 45 in the last five, Williamson timed his risky shots well. He was spot on with his slog sweeps for timely sixes against spin, ramps and guide to the third man fence against pace. A glorious cover drive for a four in the 17th over off Shivam Dube was a cherry on top for his fans.

The solitary moment of chance that RCB had while he batted was on the third ball of the 18th over. Williamson chipped a full toss from towards the deep square leg fence. The fielder placed there, Devdutt Padikkal, jumped to catch hold of the ball but failed to catch it on the rebound after lobbing it up. SRH needed 27 off 17 balls then. Had Padikkal taken that, the game could have turned out differently. Now, that is just a case of 'what could have been'.

SRH were the favourites after the target was reduced to nine in the last over. After three wickets with the ball earlier in the day, Holder hit two consecutive fours to complete the chase.

At the start of their run-chase, a lot of shouting and jeering surrounded the SRH batsmen. The volume went up a notch after Mohammed Siraj nicked off Shreevats Goswami in the first over. RCB pacers were on top for the first 15 balls.

Eighteen balls and six boundaries later, all the voices were mute.

Just when the Warner-Pandey pair had settled down, a questionable decision allowed RCB ring fielders to find their voice back. Bowling from round the wicket, Siraj cut Warner in half as the ball passed between his gloves and his body to de Villiers behind the stumps. While the on-field umpire gave it not-out, the TV umpire reversed the decision that could have gone either way.

Put it to the wicket of Warner or the tactfulness of RCB spinners, SRH's innings nosedived in the middle phase. There was only one boundary in the period of nine overs and more than 50% dot balls. 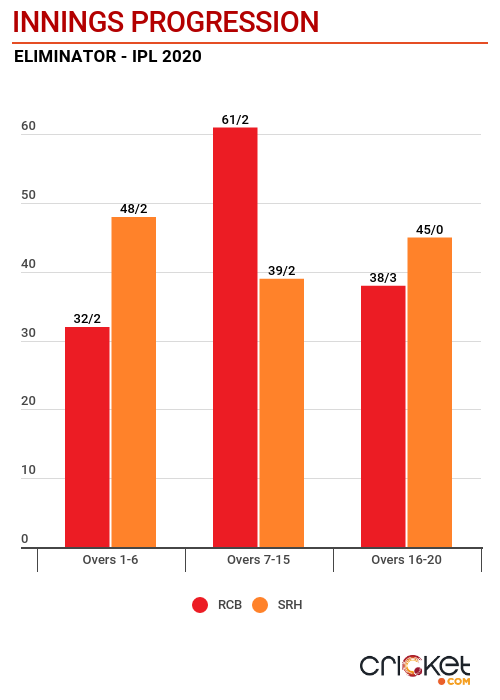 What dented them more was losing two wickets, including that of the set Pandey who edged a cut off Adam Zampa to de Villiers. The other was of Priyam Garg who succumbed to Yuzvendra Chahal's go-to plan of dangling the carrot with a loopy wide ball.

Ahead of the game, RCB made four changes that included bringing in Zampa. With a spell of 1/12, Zampa's inclusion turned out to be an excellent one. However, Williamson’s brilliance ensured SRH’s winning run stretched to four games.

After losing the toss and compromising on their bowling to strengthen their batting, RCB ended with their second-lowest Powerplay score this season.

While there was Aaron Finch included in the XI, Virat Kohli decided to take matters into his own hands from the start by walking out to open. He went one step further to confront his abysmal record against Sandeep Sharma to take the strike in the first over.

Coming forward to counter the in-swing while keeping his pads outside the line of off-stump, Kohli looked focussed as RCB started with a 5-run over.

Everything came tumbling down for RCB as in the next over, Kohli's technique backfired against Holder. Moving across to a length ball, Kohli allowed the ball to get big on him and gloved it to Goswami.

SRH bowlers created pressure from the other end as well. In the third over, Sandeep bowled five consecutive dot balls to Devdutt Padikkal. Facing his sixth ball in the next over against Holder, Padikkal mistimed a pull to mid-wicket.

Coming in after being dropped in the last three games, Finch was fidgety to start with. At the beginning of the innings he threw his bat around for risky attempts that did not yield anything significant. However, he did hit three fours after settling in and the only six of the RCB innings but his strike-rate was barely above 100 throughout.

Till the halfway mark of the innings, there was not a single over that had runs in double-digits. While the trend changed in the next over, it set RCB further back.

After the early jitters, the duo of Finch and de Villiers ambled along for a run-a-ball 41 run-stand by the first ball of the 11th over. Finch tried to attack Shahbaz Nadeem the next ball but mistimed it to deep cover.

Two balls later, Nadeem committed an error that is frowned upon in the spinner community. Setting himself to play the free-hit as his first ball, Moeen Ali would have thanked his luck. Misfortune, due to a miscalculation, came down upon him after he hit the free hit straight to Rashid Khan at extra cover. As de Villiers had set out to run, Moeen had no time to deny. Rashid's direct-hit found him meters short of the crease and out for a first-ball duck.

With the ball, Rashid continued to be unhittable. He is too much to handle for the best of players, he was unplayable for young Shivam Dube who would have been out twice on consecutive balls on any other day.

Batting at a strike-rate of 130+ when everyone around him struggled, de Villiers collected a boundary in each of the last three overs of the middle-phase. This did not prevent Rashid from finishing yet another spell that cost 24 runs or fewer.

Most of the times this season, de Villiers has bailed his side out from unfavourable situations. Tonight was not that night.

After Holder's mayhem with the new ball, T Natarajan diminished RCB's hope with a two-wicket 18th over. One of the wicket being that of de Villiers whom he yorked out with a ball to remember. In the hindsight, if de Villiers had survived for a few more balls, the difference he could have created was probably all RCB needed on the night.

After ABD's dismissal, it seemed RCB might not reach 120 but their bowlers had some fun with a few ramp shots in a 13-run last over, the highest of the innings. In the end, RCB ended with only three overs in the double-digits and a subpar target.

To lift the title this year, SRH need to beat the three sides they won against to reach the playoffs. The first of them is now struck out.