If someone was to tell you that Eoin Morgan couldn’t even sit down during the post-match press conference owing to a back spasm he suffered during England’s victory over West Indies, most people would scoff at it after witnessing what happened on Tuesday.

No boundary seemed too long as Morgan decimated a hapless Afghanistan bowling line-up, in a 150-run victory, setting a new record of maximum sixes in a one-day international game. The English skipper deposited 17 biggies into the Old Trafford stands in an innings of 148 (71 balls).

His hundred came off 57 balls, making it the fourth fastest in World Cup history.

Prior to the game, Morgan firmly advocated that Afghanistan were a force to reckon with and would definitely upset teams at the marquee event. Rashid Khan seemed to have been greatly impressed by the comments and on a mission to repay Morgan’s kindness.

A man expected to be Afghanistan’s bowling spearhead was absolutely demolished by the English and joined an ignominious list of bowlers who have conceded most runs in an ODI. Australian Mick Lewis tops the list having conceded 113 off his 10 overs, while Pakistan pacer Wahab Riaz (110 in 10 overs) and Rashid (110 in nine overs) are behind him.

A belter of a wicket greeted both teams at Manchester and Morgan had no hesitation in opting to take first hit.

In the absence of the prolific Jason Roy, James Vince was pushed to open with Jonny Bairstow and immediately found his mojo, striking the ball sweetly.

But the introduction of Mujeeb Ur Rahman putting the skids on with the ball sticking a bit in the wicket and offering turn.

Nonetheless, England got off to a sedate yet solid start posting 42 for no loss in 9 overs. Vince though couldn’t make the most of his start and departed soon – caught by Mujeeb at short fine leg – having scored 26.

Bairstow, cautious to begin with, kicked on in the company of the ever-dependable Joe Root.

Gulbadin Naib’s men were listless in the field and doled out freebies to Bairstow and Root as the pair motored along, bringing up their 100-run partnership in the 26th over.

Just as it seemed that Bairstow was primed to up the ante, Afghanistan skipper Naib struck – taking a sharp catch off his own bowling as Bairstow fell ten runs short of a ton.

In hindsight, at the end of the innings, Naib was probably wishing he hadn’t taken that catch since protagonist Morgan stepped in at Bairstow’s departure.

There is no doubt that Morgan is one of the cleanest hitters of the white ball and his innings was testament to the fact. Striking it perfectly from the start, the left-hander was a man on a mission deflating an attack that was absolutely clueless.

Considering Morgan’s recovering back, none would have expected him to pepper his favoured mid-wicket boundary but he showed no signs of being in pain and carted Rashid and co for maximum runs in the same area.

As many as 48 of Morgan’s runs came in the cow corner region and 42 to long-off suggesting the Afghans were either too full or back of a length. Rashid especially was torrid and dropped plenty of half trackers and bowled to Morgan’s preferred arc.

Afghanistan’s luck was summed up when Dawlat Zadran dropped a relatively simple chance at deep midwicket when Morgan was on 28. There was no looking back from there on and despite a flurry of wickets at the fag end of the innings, England posted a mammoth 397 for six.

A chase of almost 400 is herculean even for the best cricketing nations, so for one that is still clawing its way into the upper echelons of the game, it was going to be a near impossible task.

Finding it hard to get going against the pace of Jofra Archer and co, Afghanistan looked like a side playing for pride, without too much intent of overhauling the target.

Barring a few top order batsmen, who got off to decent starts, there wasn’t much to write home about through Afghanistan’s innings as they showed some grit to bat out 50 overs but eventually fell short after posting just 247 for eight. 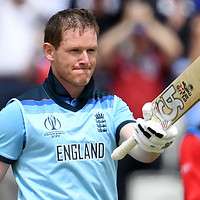 NEWS
Good sign for England to have their captain in top form: Root
Joe Root said it was significant that Morgan, whose dynamic leadership has revived England’s white-ball fortunes, had rewritten the record books. 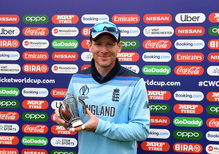