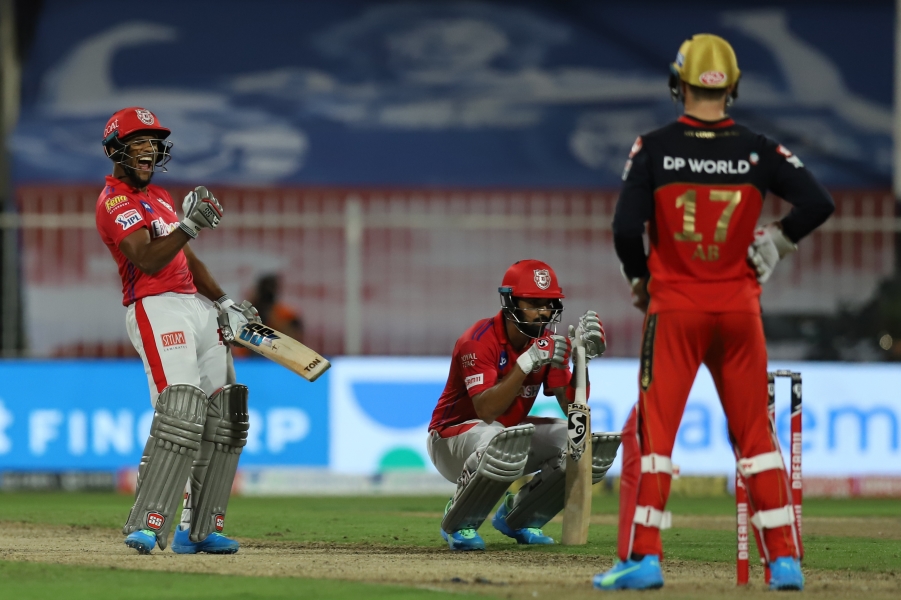 There are just so many times that you can bottle up a chase, just so many times you can take a chase so deep that it gives you more heartbreak than joy. Kings XI Punjab know a thing or two about heartaches this season. You'd think they would have learnt their lesson when needing 22 off 21 with 9 wickets in hand against Kolkata Knight Riders they lost by 2 runs. Did they? Well if Match 31 of IPL 2020 between KXIP and RCB was anything to go by, it seems they haven't.

Yes, Punjab won the match by 8 wickets, yes they scored 2 crucial points, but boy did they run it close. With 11 runs to win off 18 balls and 9 wickets in hand, Punjab should have strolled to a win. They did but off the last ball of the innings when needing 1 run for victory, Nicholas Pooran hit a six just over Chris Morris’ head over long on.

Match 31 of IPL 2020, in Sharjah had a lot of late drama but eventually, it was Punjab who aided by half-centuries from KL Rahul and Chris Gayle helped chase down a 172-run target set by RCB. 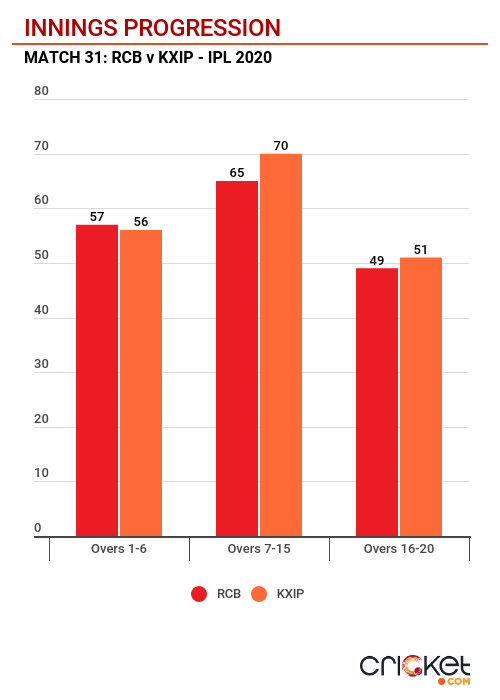 Batting first on what looked like a slightly two-paced track, Bangalore were off to a good start courtesy Devdutt Padikkal and Aaron Finch who added 38 runs for the opening wicket in just 4.1 overs.

Glenn Maxwell surprisingly started off for Punjab, something that was not taken kindly by Finch who smacked him for a six down to fine leg. The right-hander then lofted Mohammad Shami over mid-on to keep the boundaries flowing. Padikkal then got into the act bringing his wrists into play, first whipping Arshdeep Singh for a four over short fine leg, and then going one better by depositing Shami for a six over deep square leg.

However, the left-hander’s joy was shortlived with Arshdeep getting his man soon. An innocuous short of a length delivery that seemed to stick on the surface slightly was ballooned by Padikkal straight to Pooran at cover.

Kohli, playing his 200th match for RCB walked in at No.3 and immediately meant business. He got his boundary counter running with a sumptuous drive through covers before using his wrists to get one wide of square leg. Bangalore made full use of the field restrictions stroking 57/1, their second-highest score in the Powerplay so far this season.

This could have been a solid launching pad but like they have all season, Bangalore completely shut shop in the middle overs. Between overs 7 to 15, they scored just 2 fours and 2 sixes managing 65 runs. In the process, they also lost 2 wickets.

Finch does not have the greatest record against leg-spin and keeping that in mind, Murugan Ashwin was brought into play immediately after the Powerplay. The move paid dividends as the leggie struck off his second delivery with Finch playing all around a quicker one only to see his stumps in a mess. Washington Sundar came in at No.4, a move that did not quite work RCB. The left-hander could only manage 13 off 14 balls before falling to Ashwin. 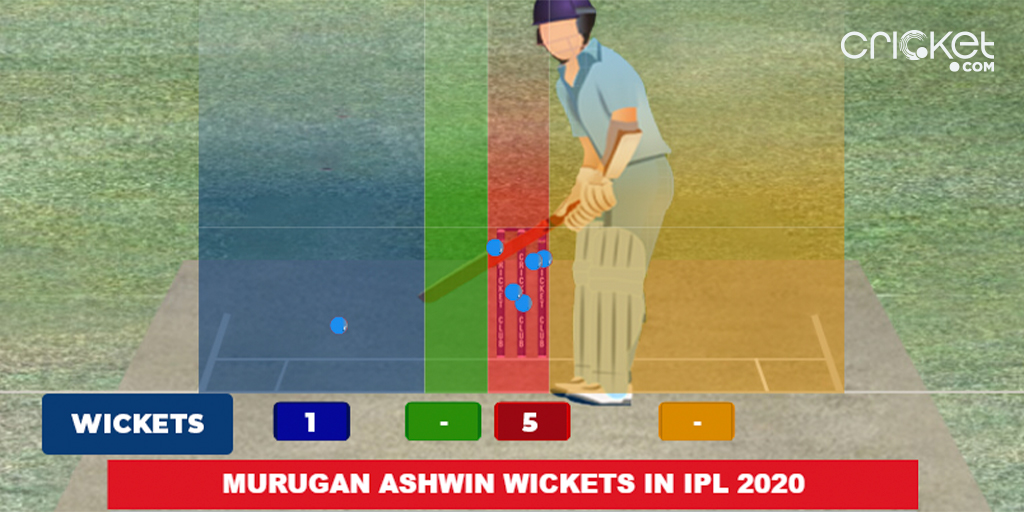 The leg-spinner has so far played just 3 games for KXIP but has a terrific record. He has struck 6 wickets striking every 8.5 balls while his economy rate also reads a decent 7.05. But what has stood out is his accuracy. Out of his 6 wickets, he has picked 5 of deliveries bowled at the stumps. In fact, 4 of those dismissals have been either bowled or lbw.

Interestingly, AB de Villiers still did not come out after Sundar's dismissal. By the time he walked into the middle, in the 16th over, it was too late. On a surface where the ball was not coming onto the bat well, de Villiers found the going tough and fell to Shami for 2. To make matters worse, 2 balls later the set Kohli fell too, gloving a slower bouncer to Rahul.

KXIP conceded 24 runs off their final once again highlighting their death bowling woes. In IPL 2020, KXIP bowlers have conceded at an economy of 19.3 in the 20th over of the innings which is the highest.

Considering the might of KXIP's top-order, RCB needed a good start and Morris was on point rightaway. The pacer got the ball to move either ways to trouble both Mayank Agarwal and KL Rahul. Navdeep Saini followed up with a cracking second over going for just 4 runs.

Something had to give and Rahul started off Punjab's boundary counter by pulling Morris for a flat six over deep square leg. Agarwal then targeted Yuzvendra Chahal smashing him for a six and two fours to get Punjab's chase going nicely. They finished the Powerplay on an absolute high scoring 56 runs without losing a wicket. 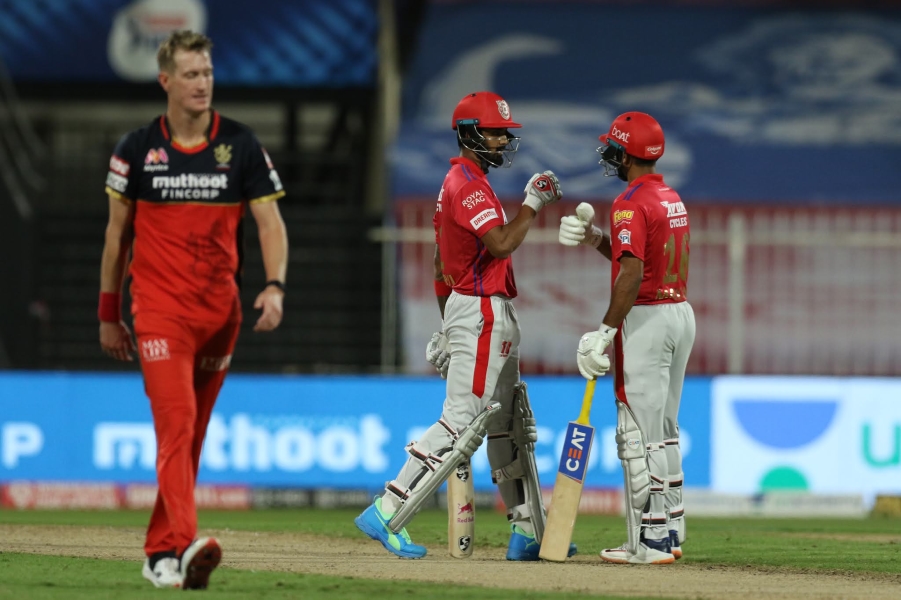 Both Agarwal and Rahul knew with a weak middle-order, they had to keep going. Siraj was welcomed to the bowling crease with a lofted drive over covers by Agarwal before the opener once again went downtown against Chahal smashing him for another half a dozen. The leg-spinner, however, had the last laugh when Agarwal trying one shot too many was castled by a classical leg break. As expected, Gayle walked in at No.3 and the run-scoring dried up. The rustiness was visible with his first 14 balls only accounting for 6 runs.

However, Siraj's second over opened the floodgates. Rahul sent Siraj out of the stadium twice before Sundar was smoked out of the ground twice by Gayle.

Bangalore needed 46 to win off the last 5 overs but with KL Rahul reaching his fourth half-century this season and Gayle also finding form it should have been a stroll in the park. Things became much easier when the duo smoked 20 runs off a single Siraj over. Sundar too travelled the distance twice in the 17th over, and it seemed Punjab would finally complete a simple win.

But a dramatic late twist saw them scoring just 4 runs of the 18th over, 5 of the 19th and 1 run off the first four balls of the 20th over. That left Punjab needing 1 off 2. This is when Gayle was run out but thankfully for Punjab, with a run needed off the final ball, Pooran slammed Chahal for a six to help his side claim a win.