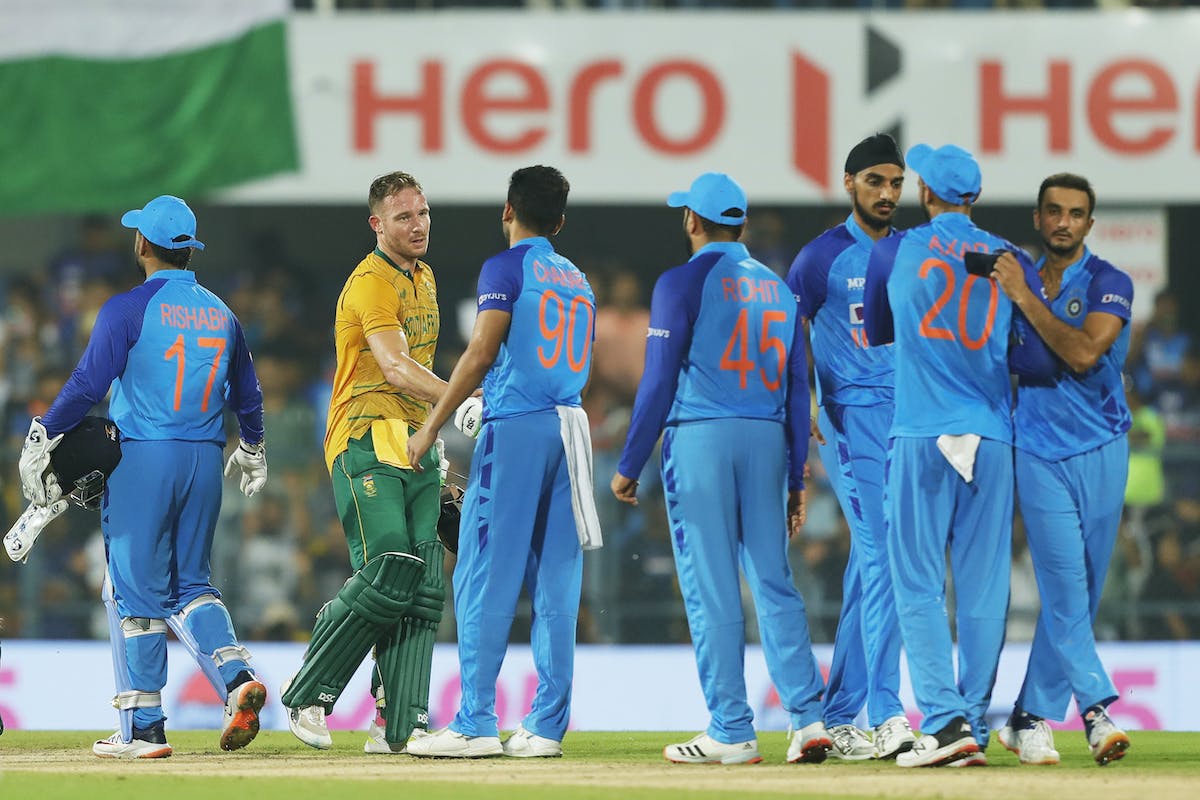 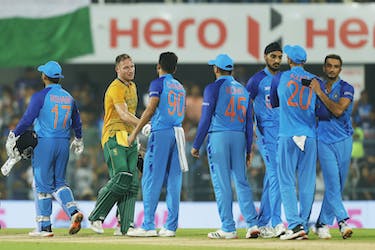 In reply, though South Africa lost early wickets, David Miller and Quinton de Kock kept them in the game with an unbeaten partnership of 174*. Despite Miller’s unbeaten knock of 106, South Africa lost the match and handed India the series.

Heading into this series, South Africa were unbeaten in India. In 2015, they had won the three-match series, in 2019, they managed to draw and earlier in 2022 (June), the timeline ended 2-2 after a wash-out in the fifth T20I.

A fighting knock by Miller

After suffering his first duck in T20Is in the first match, Miller came back strong in the second with a century. Unfortunately, his efforts weren’t enough to take South Africa over the line. Nevertheless, in his knock, Miller registered few sensational records:

-Miller with 2050 runs in T20Is, is the highest run scorer for South Africa in the format. He went past JP Duminy’s tally of 1943.

-Miller became the first batter in T20Is to have scored multiple centuries batting five or lower. His first century came against Bangladesh in 2017.

-His unbeaten knock of 106 is the highest for a batter from a full member nation, batting five or lower. Previously, Liam Livingstone against Pakistan in 2021 in Nottingham had scored 103. 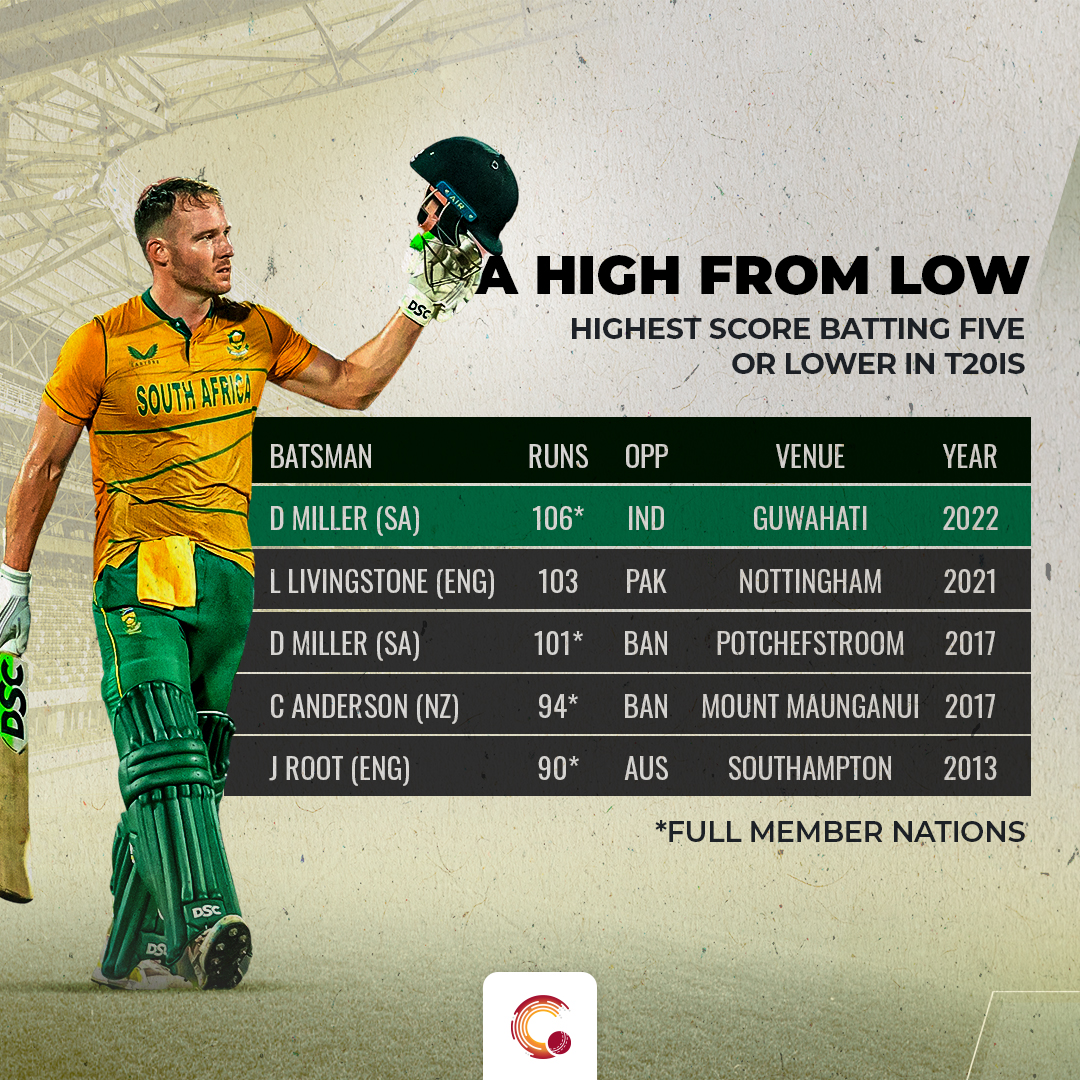 -With seven sixes in this innings, Miller now has 78 sixes in T20Is when he has batted five or lower, which is the most for a batter. He went past Kieron Pollard’s tally of 75 sixes.

-Miller registered his century in just 46 balls. In T20Is, among the six batters who have scored a century against India, his century today was the fastest.

-He became the fifth batter In T20Is to score a century in the second innings in a losing cause.

When a batter is in rich form, records tend to follow them. The same has been with Surya. In his knock off 61, Surya broke few records and here is a list of those:

-When he reached 24, Surya became the fastest batter to the landmark of 1000 runs in terms of balls. He achieved this feat 31 balls quicker than Glenn Maxwell. 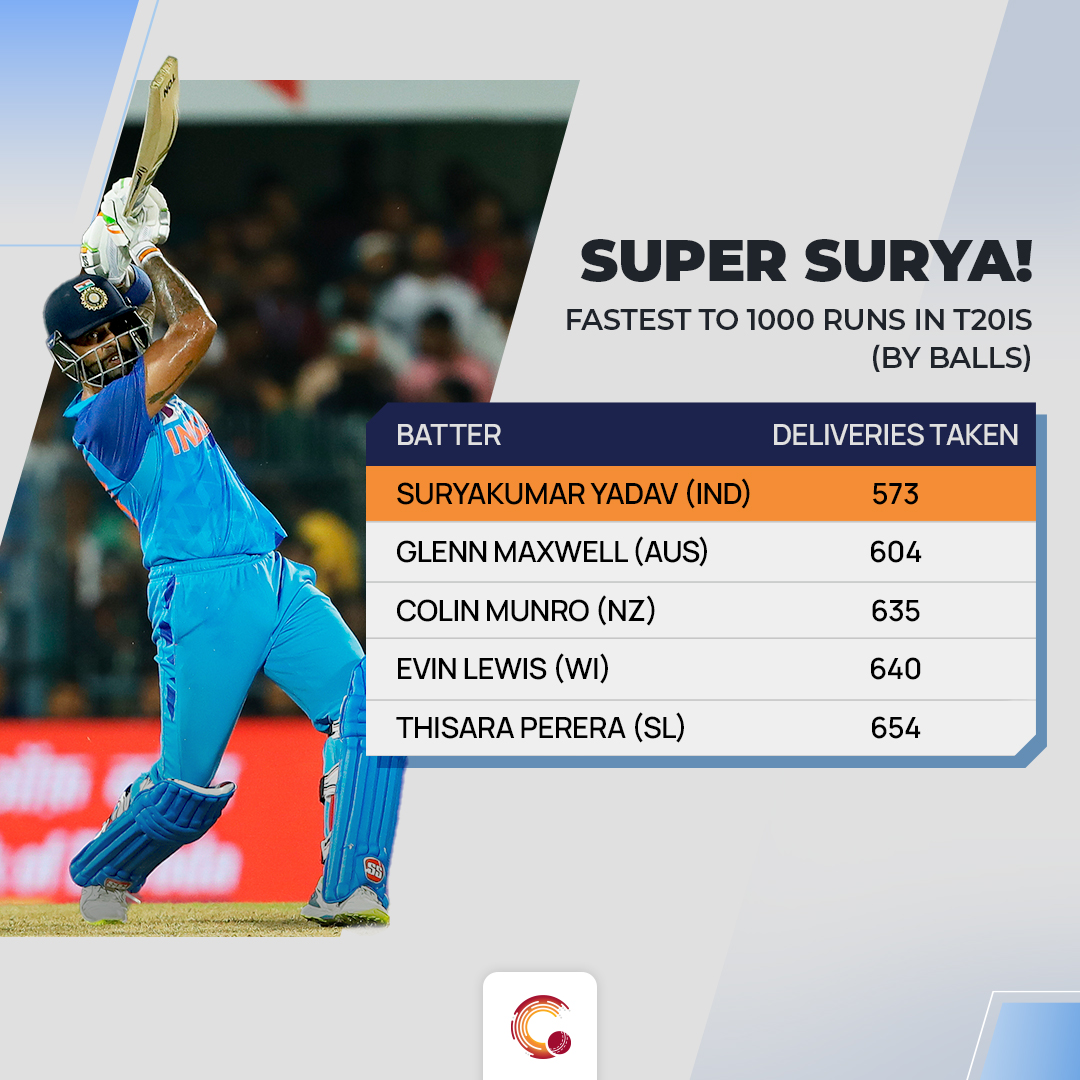 -With his fifth six of the innings, Surya became the first batter to hit 50 sixes in a calendar year. 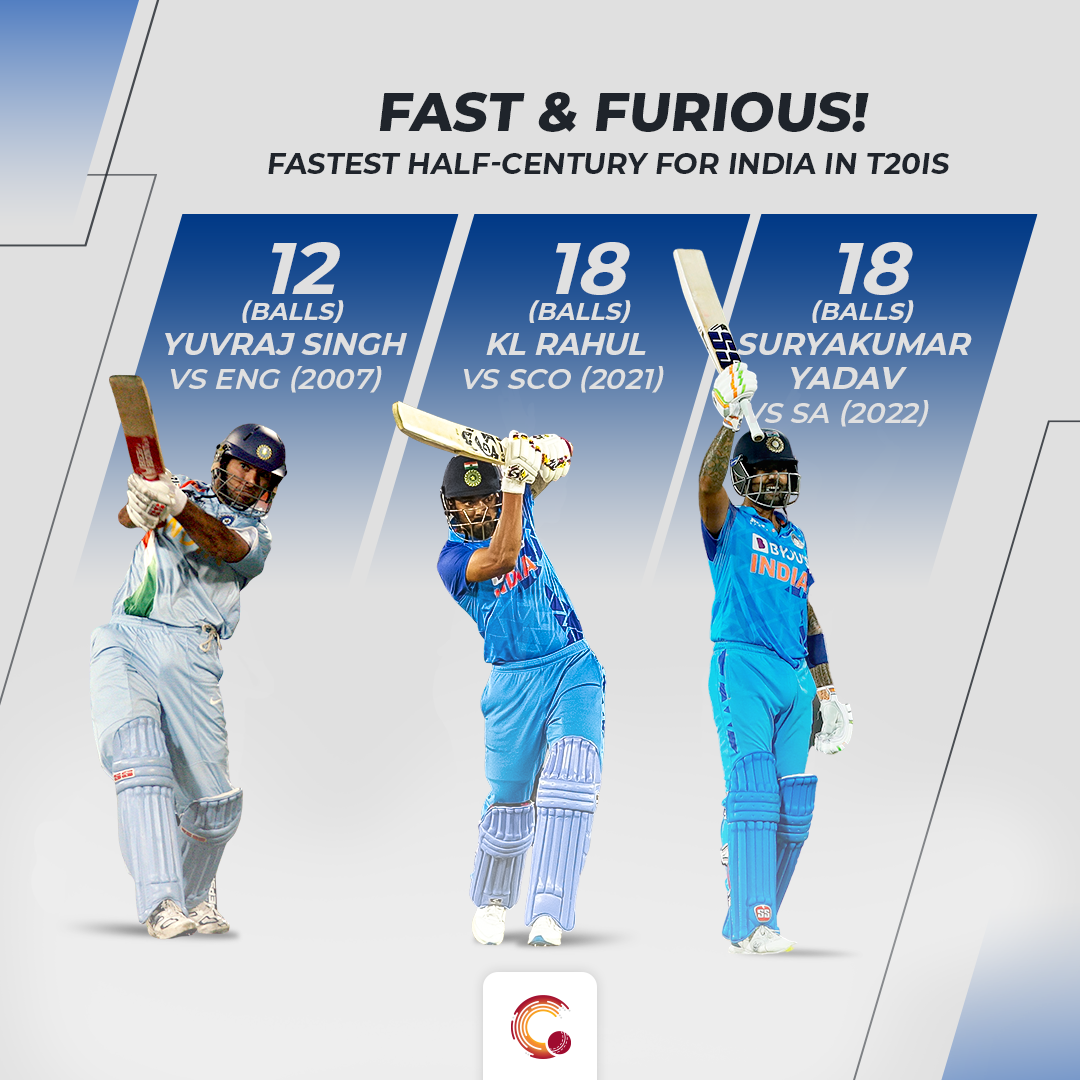 -Surya ended his innings at a strike rate of 277.3. Among Indians who have scored 50+ runs in an innings, only Yuvraj Singh in his monumental knock against England in 2007 had a higher strike rate (362.5). 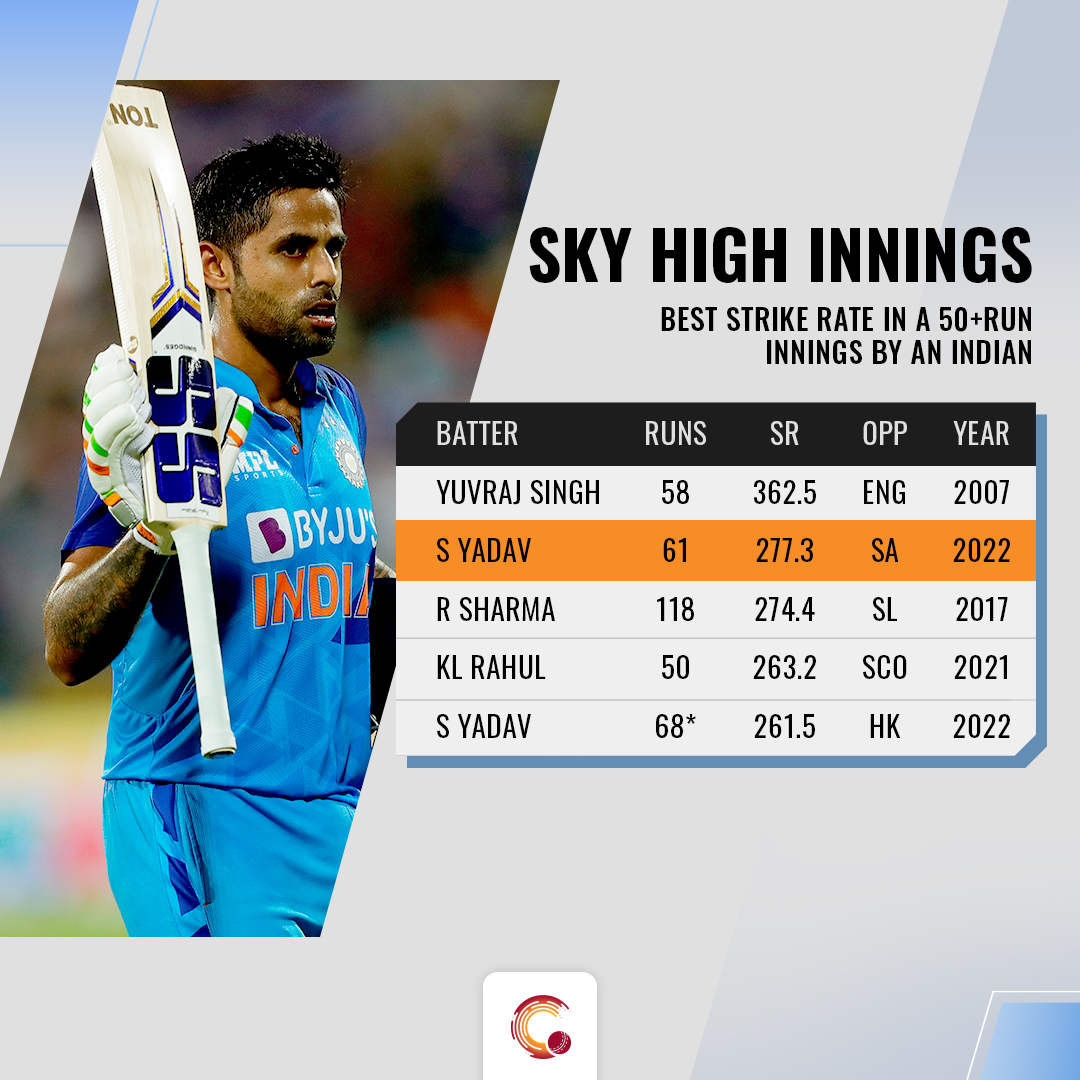 India got a platform from their openers after Rohit Sharma and Rahul hoisted a 96-run partnership. But, it was the blazing partnership between Kohli and Surya that helped India register a mammoth total. 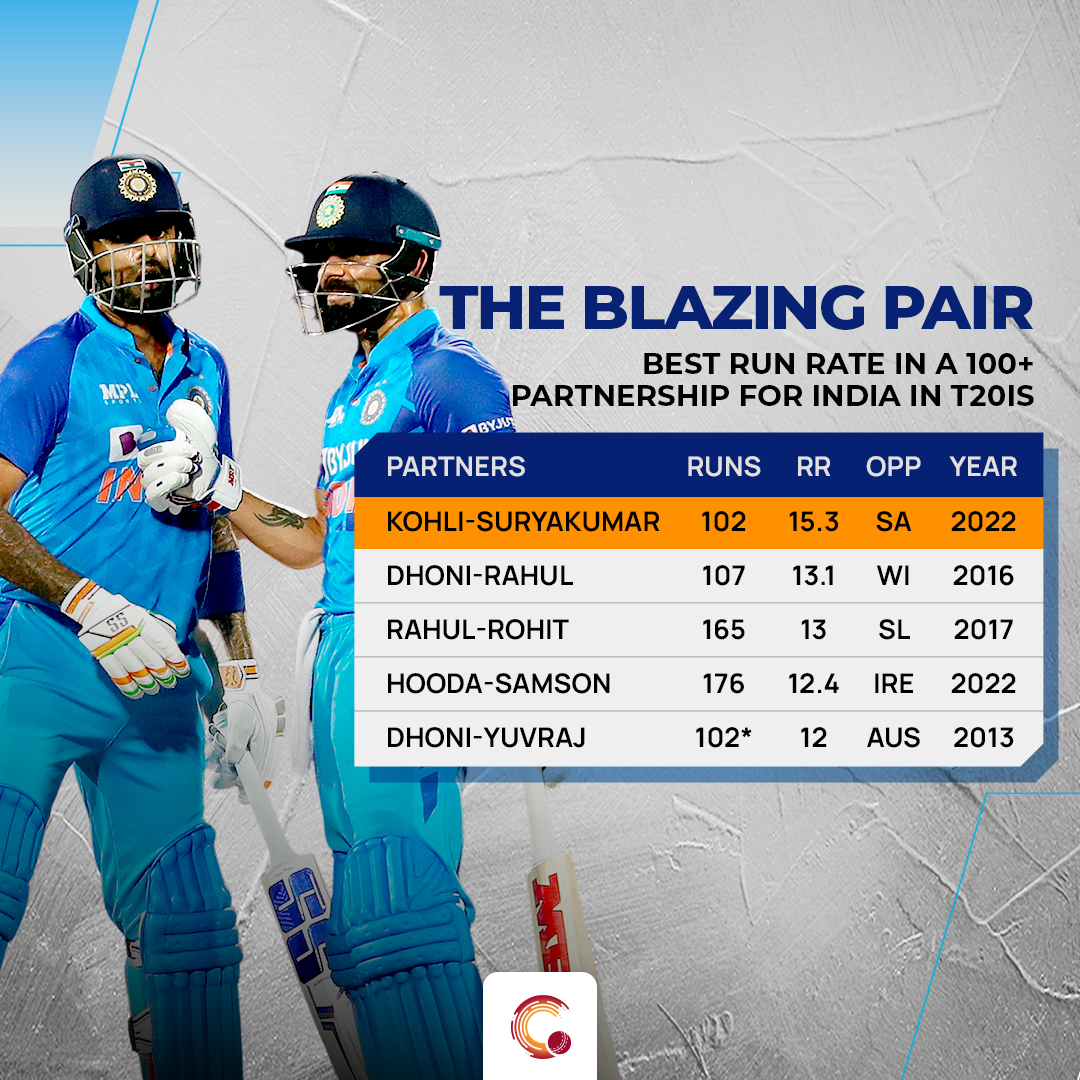 A massive partnership in vain 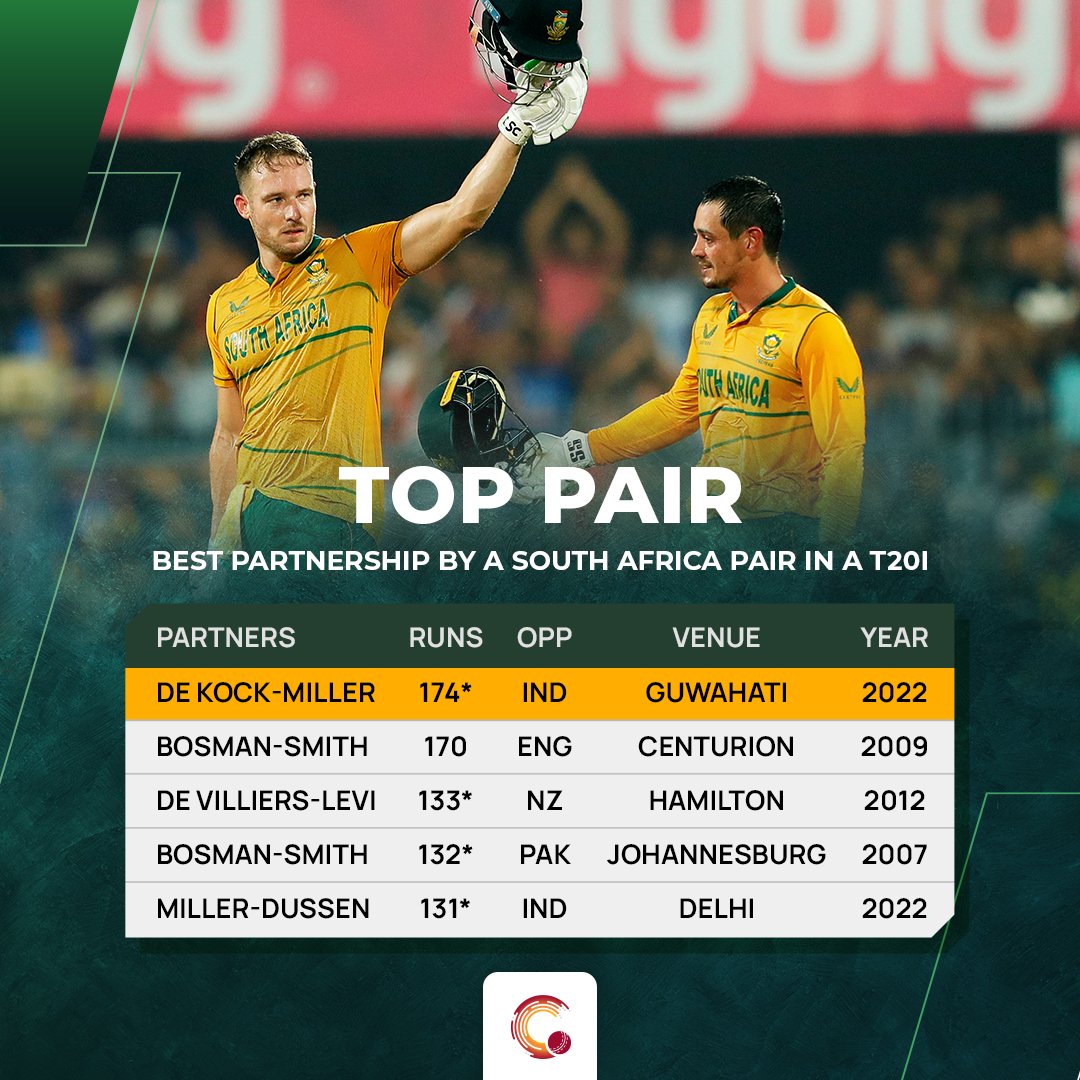 Adding further, this was the best ever partnership in T20Is between a pair for the fourth or lower wicket. Now salt to the injury, this is also the biggest partnership in a losing cause. 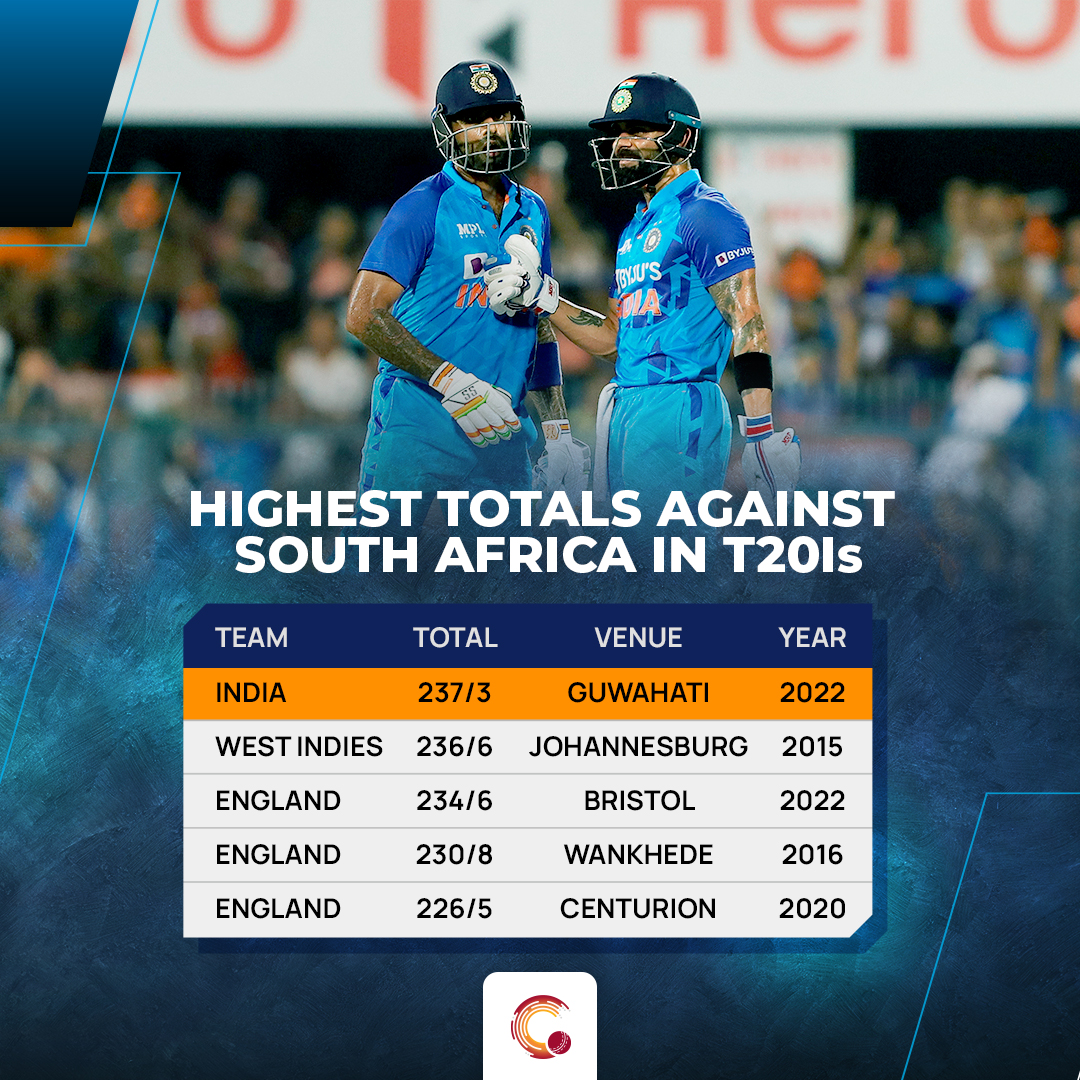 Before Surya registered an 18-ball half-century, Rahul for a brief time, had the fastest half-century for an Indian against South Africa. He had a 24-ball 50, two balls quicker than Dinesh Karthik’s feat earlier in 2022.

In this innings, Indian batters hit 25 fours, which is the most for them in an innings. Previously, against New Zealand in 2007 and England in 2022, they had hit 23 fours.

Harshal Patel conceded 40+ runs for the sixth time in 2022, the joint-most by a bowler in a calendar year. The other two, Mark Adair of Ireland, and Jason Holder of West Indies, also suffered this in 2022.

Arshdeep Singh conceded 62 runs in his four-over spell, which is the most for him in all T20s. In T20Is, only Yuzvendra Chahal against the same team in 2018, had conceded more runs (0/64).

Temba Bavuma suffered a seven-ball duck, which is the longest for a South African batter in T20Is.

India in the last five overs of their innings, scored 82 runs. Only against the West Indies earlier this year, they had scored more runs (86).

In this match, 160 runs were scored in the last five overs of the match (both innings), the highest aggregate in the slog overs of a T20 match.