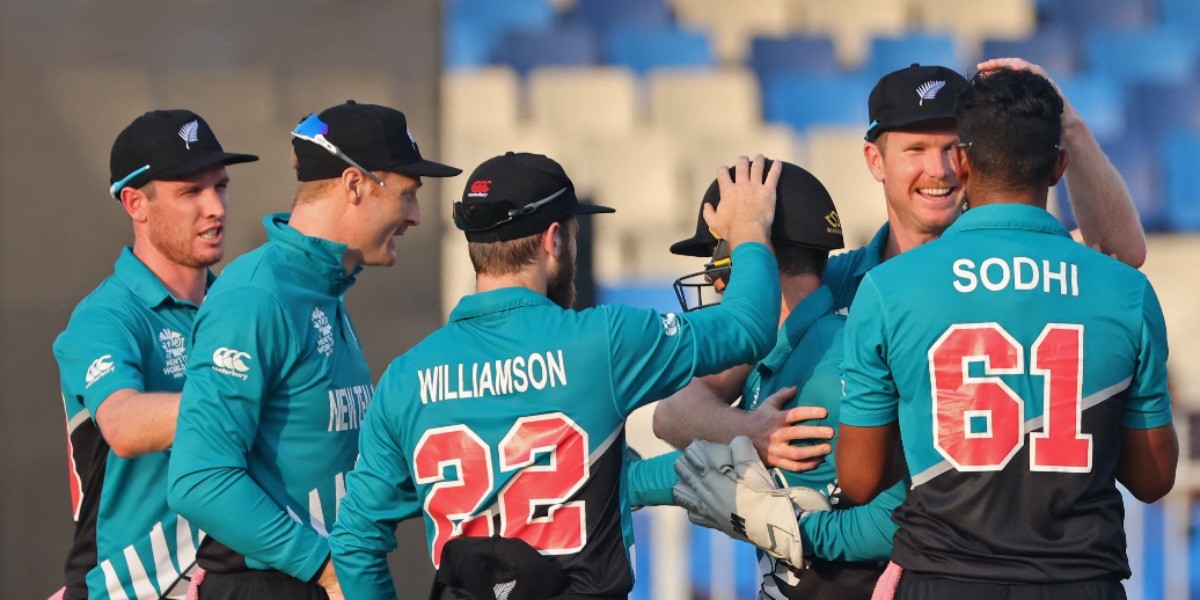 It’s semi-final time! After 42 league stage matches, including the first round, four teams will battle for a place in the final, the first step of being crowned champions. From each group, there have been two that have already won the trophy (England & Pakistan) once and two that haven't still had their hands on it (New Zealand & Australia).

In the first semi-final, England, the toppers from Group 1 and New Zealand, who finished second in Group 2 will eye for a spot at the grand stage. England and New Zealand both have lost one match out of the five played in the group stages. However, the four England wins have been extremely comprehensive as their net run rate +2.464 suggests. One of their comprehensive wins came against the defending champs West Indies after bowling them out for just 55.

Heading into the first Semi-final, England have a slight upper hand in both departments. New Zealand have done well with the bat, but England have been brutal as a batting unit. On the bowling front, New Zealand bowlers have been economical, but England bowlers have been amongst the wickets and have also been economical. It’s a blockbuster in the first semi-final as England go in as the firm favorites. Here are a few tactical match-ups for the first semi-final:

The brutality of England batters

Even though Jason Roy is unavailable for the remainder of the tournament, England still possess an arsenal of hard hitters. No wonder, they have the best run-rate for a team in this edition of the T20 World Cup. England have scored at a run rate of 8.8 in the Super 12 stage. 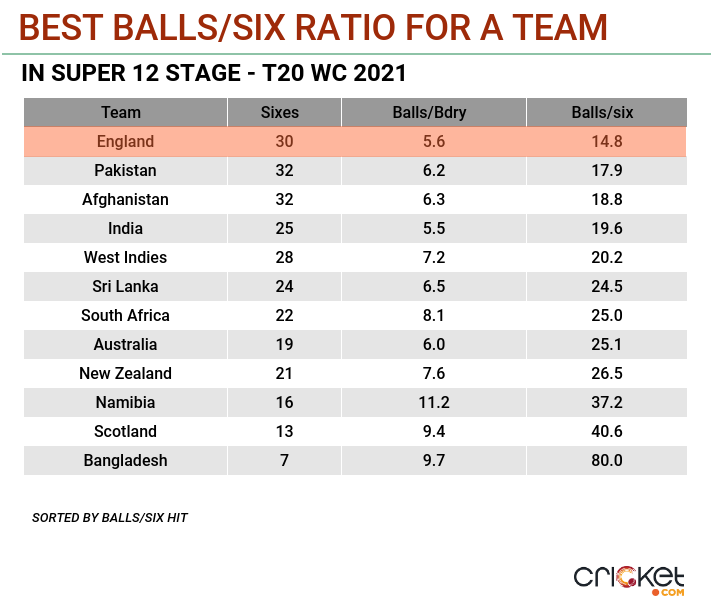 They have smashed a boundary every 5.6 balls, only India have had a better ratio (5.5). They have hit six every 14.8 balls, which is the best among all teams.

Both England and New Zealand batters have been very atypical in their approach in the powerplay. England on one hand have gone with the aggressive intent, which is why their run rate of 8.3 in this phase is the second best. New Zealand, on the other hand, have scored at 7.5. But, there is a catch, New Zealand have scored seven-plus runs/over (42 score) in each of their five innings and they have lost only six wickets. Hence, their average runs/wicket of 37.7 is the joint-second best after Pakistan.

The clash of the best bowling units

Spin to win for England

As a rather surprising turn of events, England spinners have outclassed their pacers. In every aspect of the game their spinners have been ahead of the pacers. England pacers have bagged 18 wickets at an economy of 7.4 and an average of 20.5 and strike-rate of 16.7. 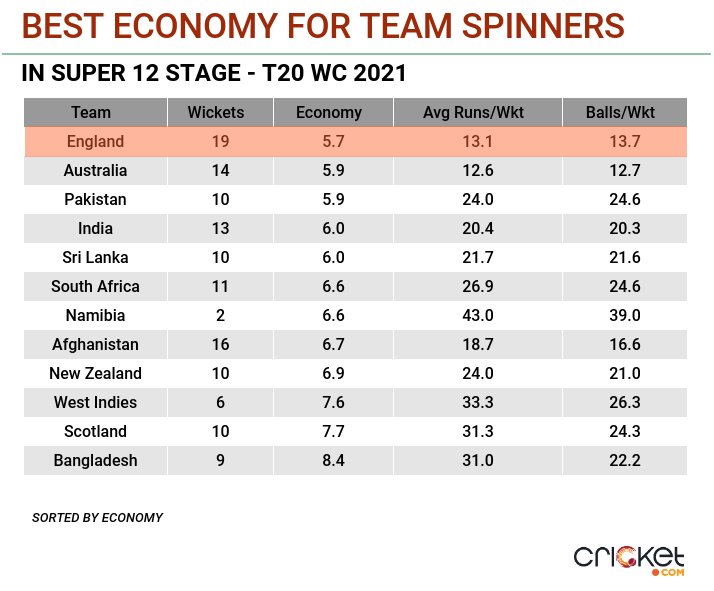 The early strikers vs run containers

In four out of the five matches played, England bowlers have restricted their opponent to less than 140. The main reason behind that is the early inroads made by their bowlers inside the powerplay. In the four matches where England bowlers have restricted the opposition to sub-140 total, they have bagged three-plus wickets in all in the first six overs. In the only match where they picked up one wicket, they conceded 189 runs against South Africa. Hence, their balls/wicket ratio of 12.9 in the first six overs is the best for a team in the Super 12s and so is their economy of 5.3. 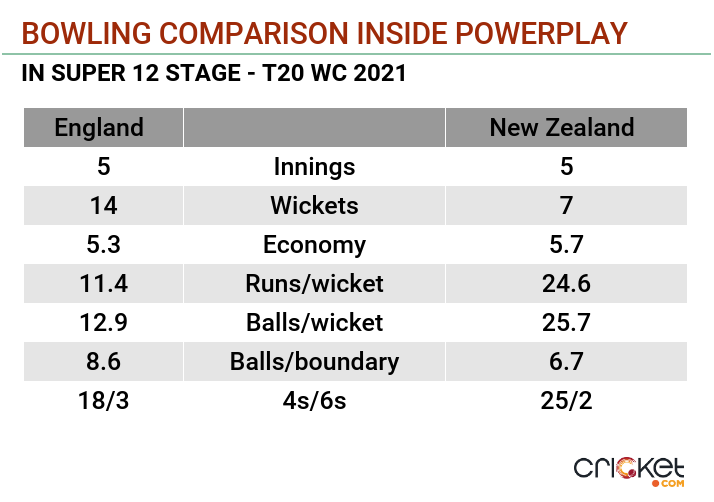 On the other hand, New Zealand bowlers have conceded 36 or fewer runs in four out of their five outings in the Super 12s. By virtue of their miserly bowlers, they have conceded 5.7 runs/over, the second-best in this phase. But, they have bagged a wicket every 25.7 balls.

All-in-all, a strong all-round England side are the potential winners of this T20 World Cup and a tough competitor to beat. However, funny things do happen in cricket and New Zealand are known for being the heartbreakers, as shown by them in the 2015 and 2019 World Cup editions. Being among the most consistent teams across formats, can they go past England and reach an ICC final for the fourth time since 2015? 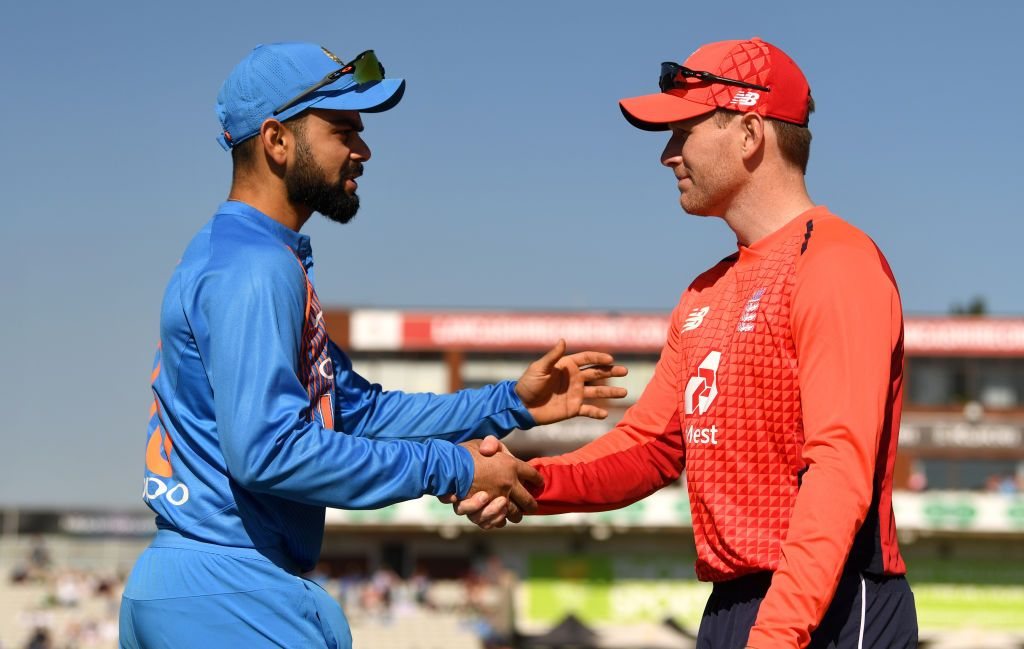 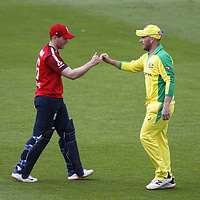