Root as captain: A boon or curse? 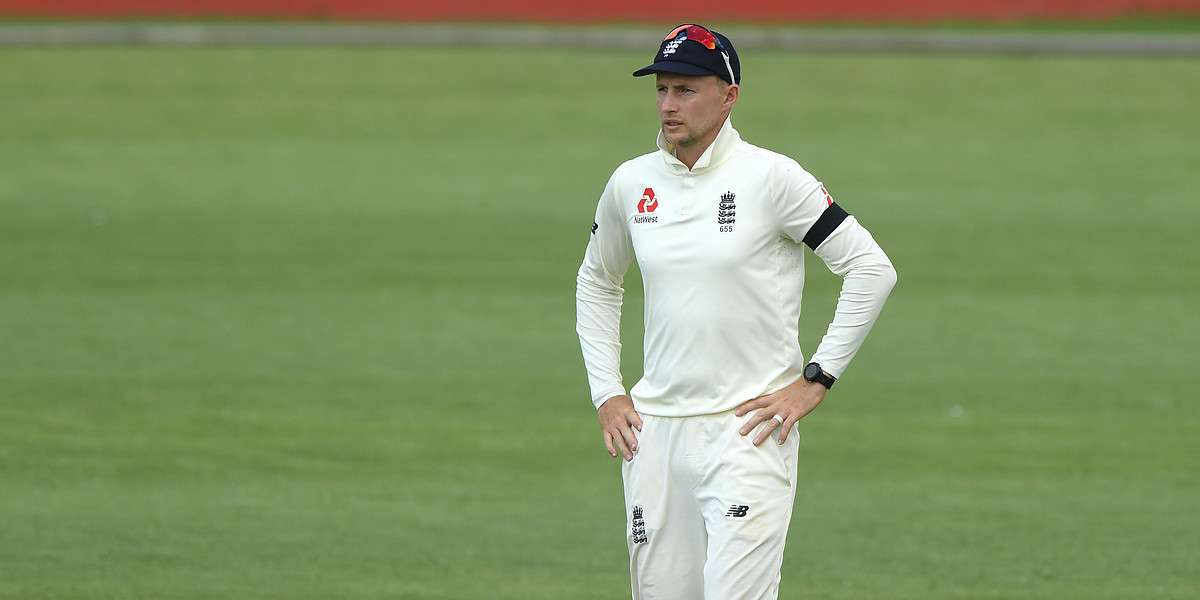 Root as captain: A boon or curse?

On this day in 2017, Joseph Edward Root captained the England Test side for the first time against South Africa at Lord’s

England is the only team to have played over 1000 Tests and they have had considerable success in those. England have had some truly exceptional characters in a captain’s role, right from the first captain James Lillywhite Jnr to legendary ones like WG Grace, Archie McLaren, Peter May, Wally Hammond etc. England till date has witnessed 80 captains and Joe Root is the latest to be added into a big list of esteemed captains.

Root was appointed captain during the English summer in 2017 following Alastair Cook’s retirement. In a short time, Root has become one of the most accomplished skippers for England. With a win percentage of 51.3, he stands second among English captains who have led in at least 30 Tests. At the same time, Root has a loss percentage of 38.5 which is the third-highest among those captains. Though he has a high win percentage, his high loss percentage is a concerning one. In the 39 matches he has captained, England under him have drawn a Test only on 4 occasions.

For starters, Root’s captaincy career kicked off with a series win against the Proteas, followed by the West Indies. His third assignment was the Ashes in 2017/18. However, he couldn’t repeat the same. England lost 4-0 (5) under him in Australia. He couldn’t regain The Ashes at home as well in 2019. Though his overall win record is good, his Ashes record is a complete contrast to it. In the 10 matches he has captained in an Ashes series he has won only 2 of them with a win percentage of 20. His win percentage in The Ashes is the third-worst for an English skipper who has captained in 10 or more matches. 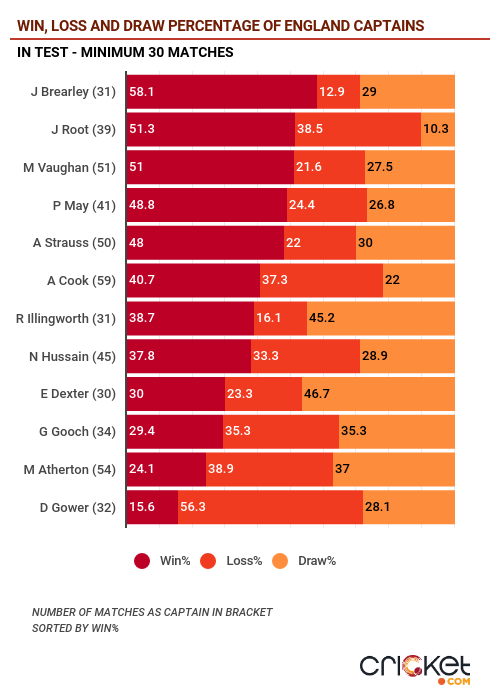 Since 2017 Root has had a mixed bag of results as captain. In 2017 England won two series and lost one which was The Ashes. In 2018, they had a bad start as they lost a series against New Zealand in New Zealand. They then managed to draw a series against Pakistan in England and rounded the year off with series wins against India and Sri Lanka. In 2019, apart from their win against Ireland, they couldn’t nab a single series.

In some cases, captaincy can be a burden. For Root, that has been the case. Root, Kane Williamson, Steven Smith and Virat Kohli are considered to be the top four batsmen of this era. Apart from Root, the rest three have excelled with the added responsibility, especially Kohli. Although Smith is not a captain now, his numbers as skipper are impeccable in Tests. Root had a batting average of 52.8 in 52 matches before he was appointed as the commander-in-chief in 2017. From there on, his batting seems to have been impeded by the burden of leading the team as his batting average has dropped to 42.9. In comparison with the other three, Root is the only one who has had an average drop after captaincy. Even in terms of run-contribution, Root as captain has contributed only 14.8% of runs, which is the lowest among the four. 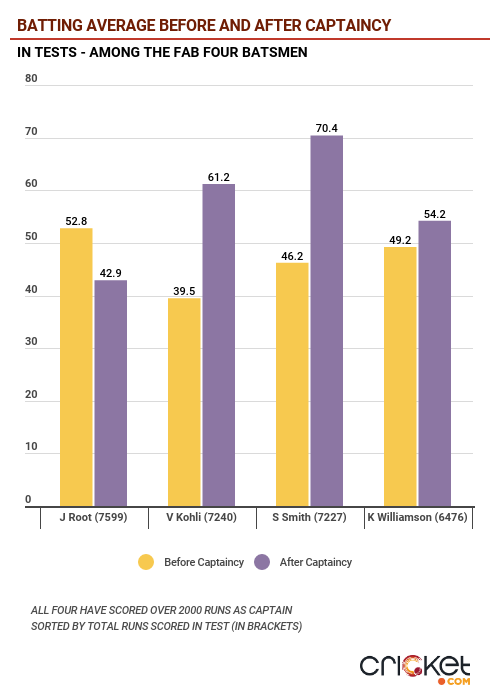 Let’s look at how the fab four have been impactful as skippers for their team. As seen above, Smith is above everybody in terms of average. In wins, he has an average of 84.2, which is the most among the four. 64% of Williamson’s runs have come in wins - the most among the four. Root lags behind in both, his average in wins and contribution in wins is also the lowest. In fact, his average of 46.9 in wins as a captain is the third-lowest among all the captains who have scored at least 1500 runs in a Test win. 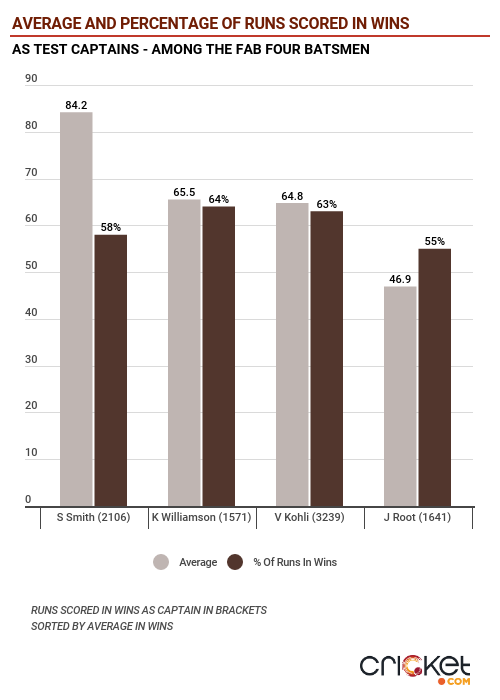 Though Root has led in 39 matches, he is yet to prove his might with the bat like the other three have done. Smith might not be a captain now, but he bulldozes everyone with the bat. Kohli and Williamson are certainly the silent killers. However, Root’s potential as a captain is highly spoken of. But can he lead the side to glory without hampering his batting? Only time will tell.