Shaheen’s absence, Babar against Chahal and Jadeja and more 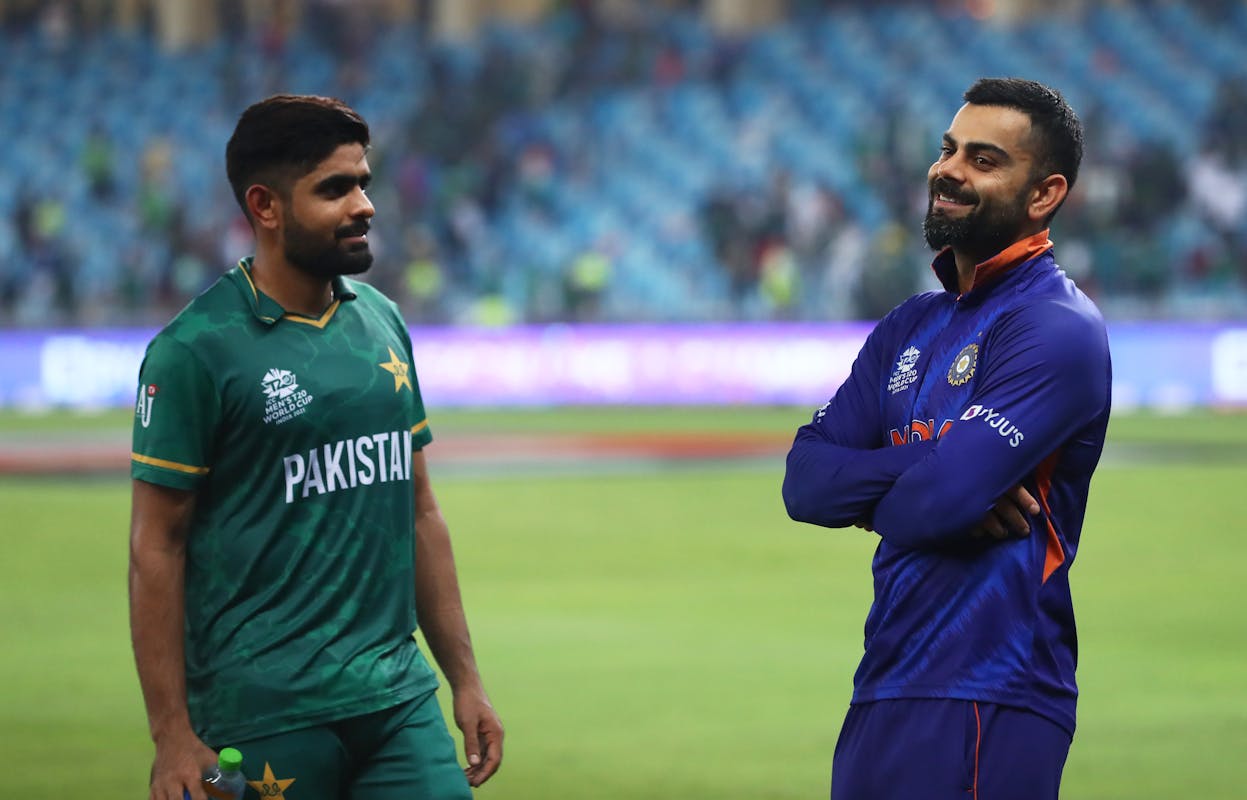 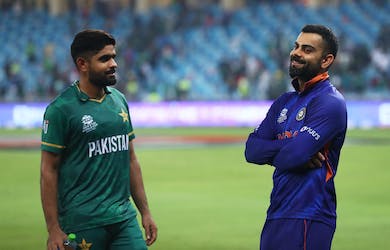 Shaheen’s absence, Babar against Chahal and Jadeja and more

Key battles, match-ups, and tactical ploys against players from Match 2 of Asia Cup 2022, between India and Pakistan in Dubai

One of the biggest rivalries in cricket, India and Pakistan, are playing their first encounter of the 2022 edition of the Asia Cup against each other. Pakistan trounced India when the two teams met last time in the 2021 ICC T20 World Cup. Despite their 10-wicket margin win in their previous clash, India have a massive advantage over Pakistan in T20Is. In nine matches, India have won seven, including the bowl-out in 2007. Here are a few tactical plots that could go against a few key batters from both teams.

A big miss in the form of Shaheen Afridi

The most prominent talk heading into this match is the absence of Shaheen Afridi in Pakistan’s squad. The left-arm pacer was the destructor in chief when the two teams met last time. More than that, it is not about the bowler but the bowling classification.

Indian batters' struggle against left-arm pacers is a universally known fact. However, with Shaheen ruled out of the upcoming Asia Cup, Pakistan’s bowling unit doesn’t have the X-factor. 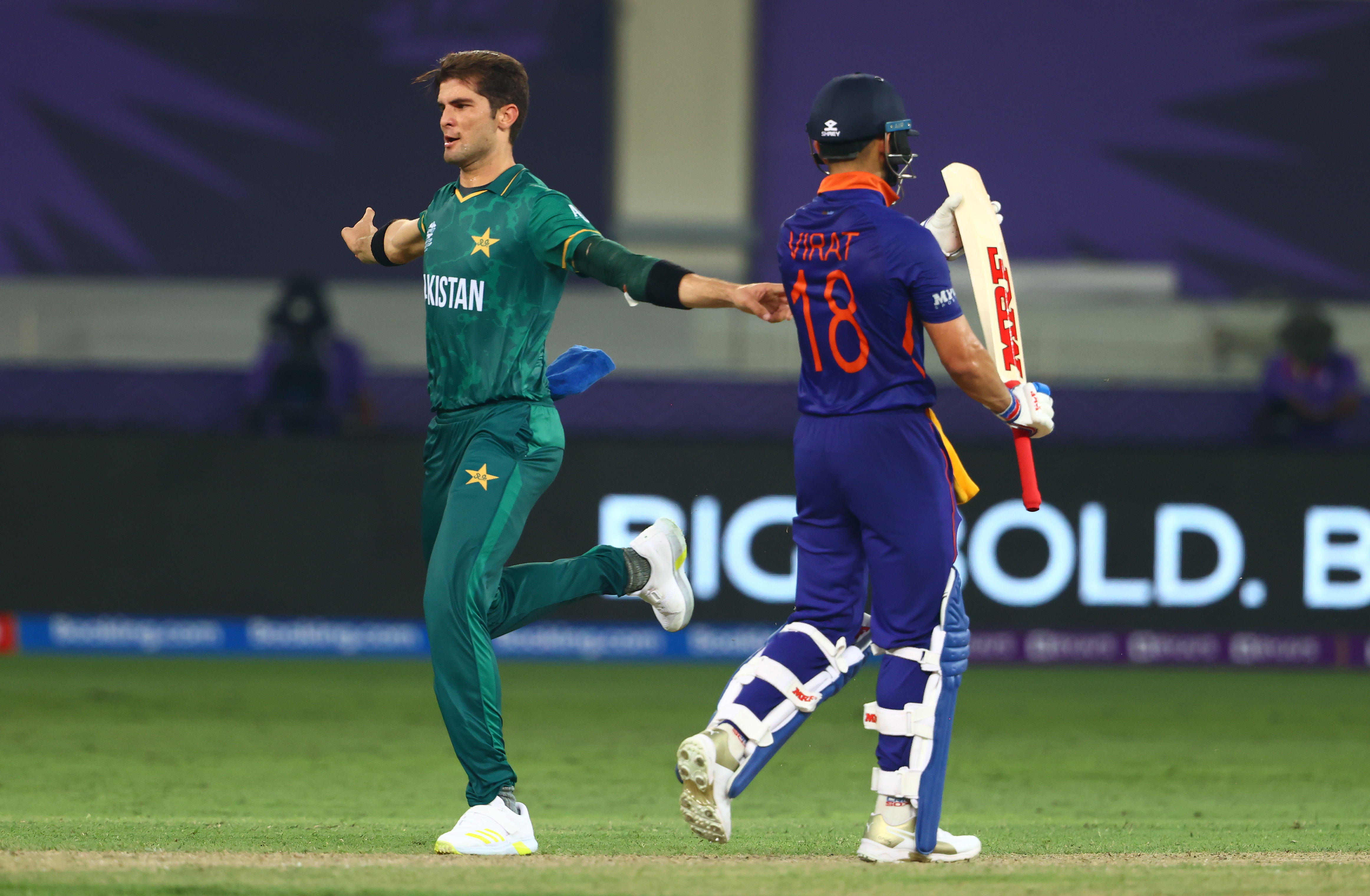 India’s top three out of the four, assuming it to be Rohit Sharma, Virat Kohli, and Rishabh Pant, have had their share of problems against left-arm pacers. Rahul, among the four, has been better than the other three.

Can Chahal and Jadeja cause trouble for Babar?

Babar has been an unstoppable force in recent times, may it be in Tests, ODIs or T20Is. Ranked within the top three (third in Tests and first in ODIs and T20Is) in all three formats is a testimony of his success.

But, he has had his fair share of trouble against spinners, especially in the strike rate department. In all T20s post the 2021 WC, Babar has averaged 26.5 with six dismissals in 15 innings against spinners. He has hit a boundary every 7.8 balls. Out of the six dismissals against spin, four have been against slow left-arm orthodox and two to leg spinners. He hasn’t been dismissed by an off-spinner but has a below-par strike rate of 77.8.

Suryakumar Yadav has been a revelation in recent times, especially in the shortest format of the game. However, there is one particular bowling type that has caused him concern. 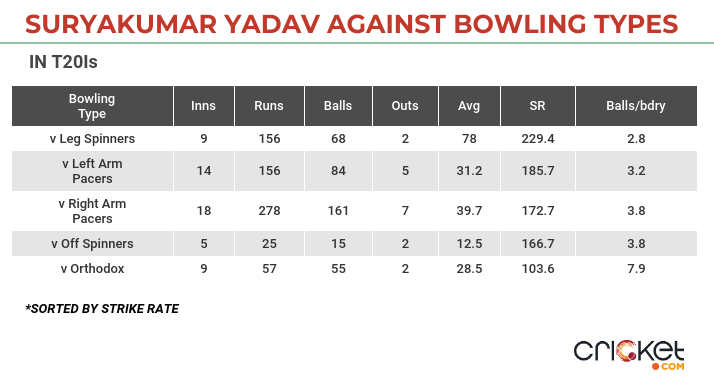 Kohli will be tested by the spinners

Virat Kohli’s barren streak of runs has had a longer stretch than expected. He has been struggling to score runs, and against spinners, he has crawled for runs. 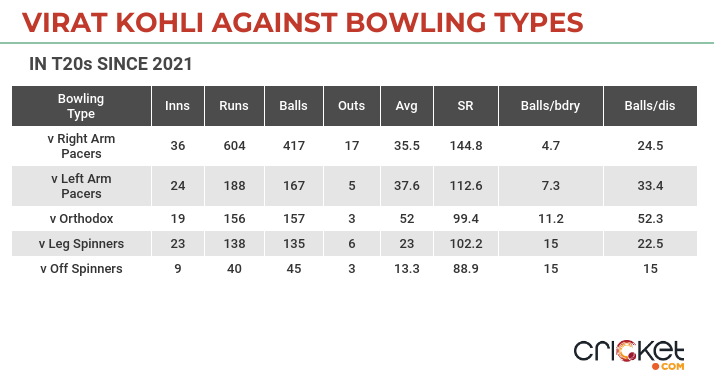 No off-spinners to trouble either Kohli or Rohit

Two of India’s greatest batters of modern times, Kohli and Rohit, haven’t had a great time with the bat of late. However, Rohit, in his short stays, has played cameos. But, there is one bowling type against whom both have shared the struggles.

In all T20s since 2021, Kohli has three dismissals in nine innings at an average of 13.3 against off-spinners with a strike rate of 88.9. Rohit has a better strike rate (129.3) but has seven dismissals in 16 innings at an average of 15.1. Among bowling types against whom both have faced 10+ balls, Kohli’s balls/dismissal ratio of 15 and Rohit’s 11.7 are their worst. Fortunately, Pakistan does not have an off-spinner.

Bowling short to Asif, the best way to stop him

Asif Ali is one pf the recognized finishers for Pakistan in the current squad. In all T20s since 2021, he has a strike rate of 182.6 in the last five-over phase. He has a special liking towards pacers as he strikes at 157.4. However, pacers have found immense success when they have bowled short to him. 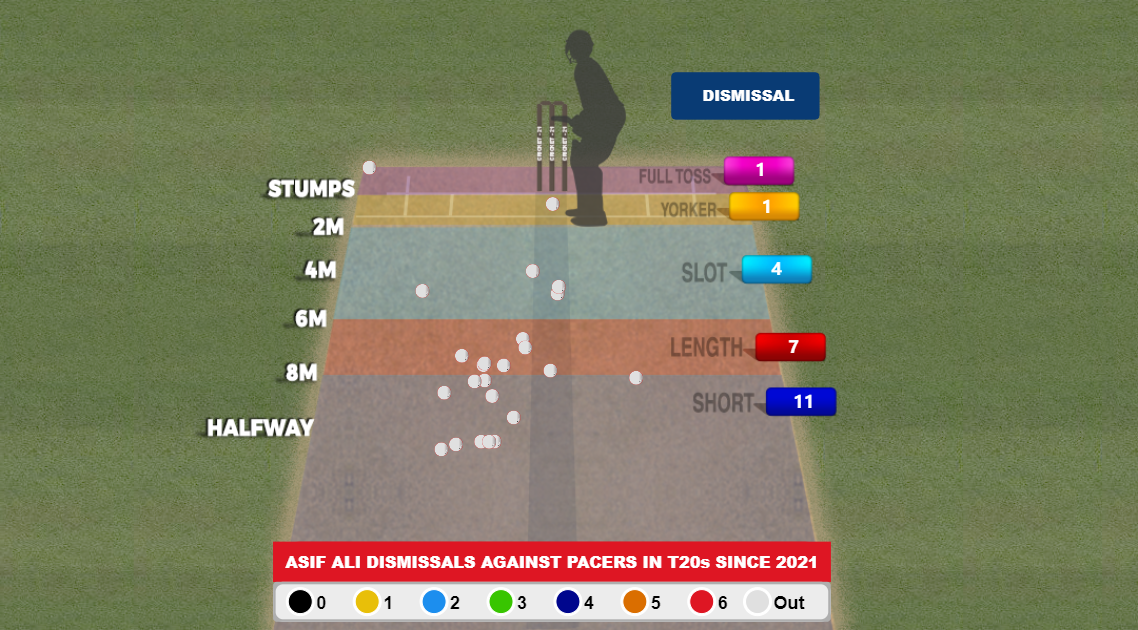 In the aforementioned time, when pacers have bowled full to Asif, he has struck runs at a strike rate of 202. Whereas, when bowled on the back of a length or short, he has a strike rate of 157, and more importantly, 11 of his 24 wickets against pacers have come from this length.

Another Indian batsman with a weakness against left-arm spinners

Generally, left-handed batters love facing slow left-arm orthodox bowlers. But, in Rishabh Pant’s case, it has been the opposite, especially in T20s since 2021.

During this time frame, Pant has averaged 14.6 with five dismissals in 15 innings against the particular bowling type. He has a balls per dismissal ratio of 11, the lowest against a bowling type. Before 2021, Pant was dismissed to left-arm spinners, but his strike rate was in the high 150’s. Between 2018 till 2020, he has a strike rate of 153.8. However, since 2021, it has dropped down to 132.7. Another batsman for Nawaz to have a crack at.