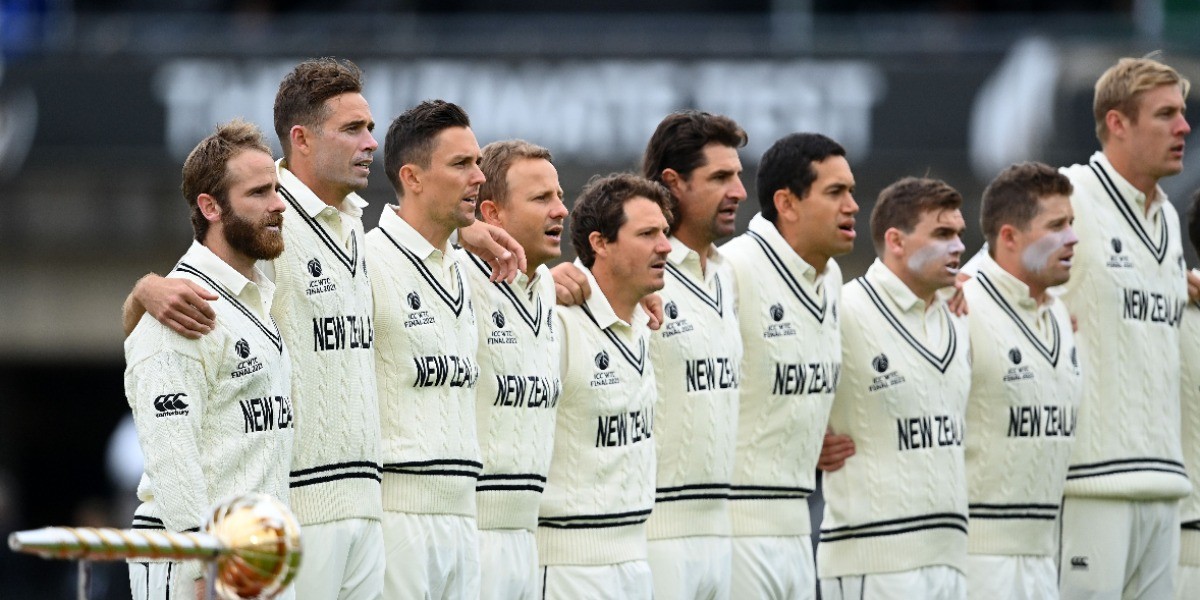 From number eight to number one, a look back at New Zealand's leap of faith across a decade

“It was a beautiful day but the pitch at Newlands looked a touch green. I went out to toss and decided we will bat. I wanted to make a strong statement - to my team and also the opposition that we are not gonna be afraid. 19 overs and two balls later, we were all out for 45,” said Brendon McCullum about his first day as New Zealand’s full-time Test captain in the Colin Cowdrey lecture in 2016.

It was a false-start. But in hindsight, McCullum and New Zealand would prefer it over the Beginner’s Luck which would later transpire into something a lot less than envisioned.

As it happened with some great teams before, losing out a small battle, irrespective of the degree of embarrassment, can lead to winning the big war. In some examples, England sat down after being blown away for 51 by West Indies in Jamaica, 2009 and became the number 1 Test team in 2011. India rose from the disappointment of the 2007 ODI World Cup. South Africa built a champion team after missing out on the Super Six stage in a home World Cup in 2003. 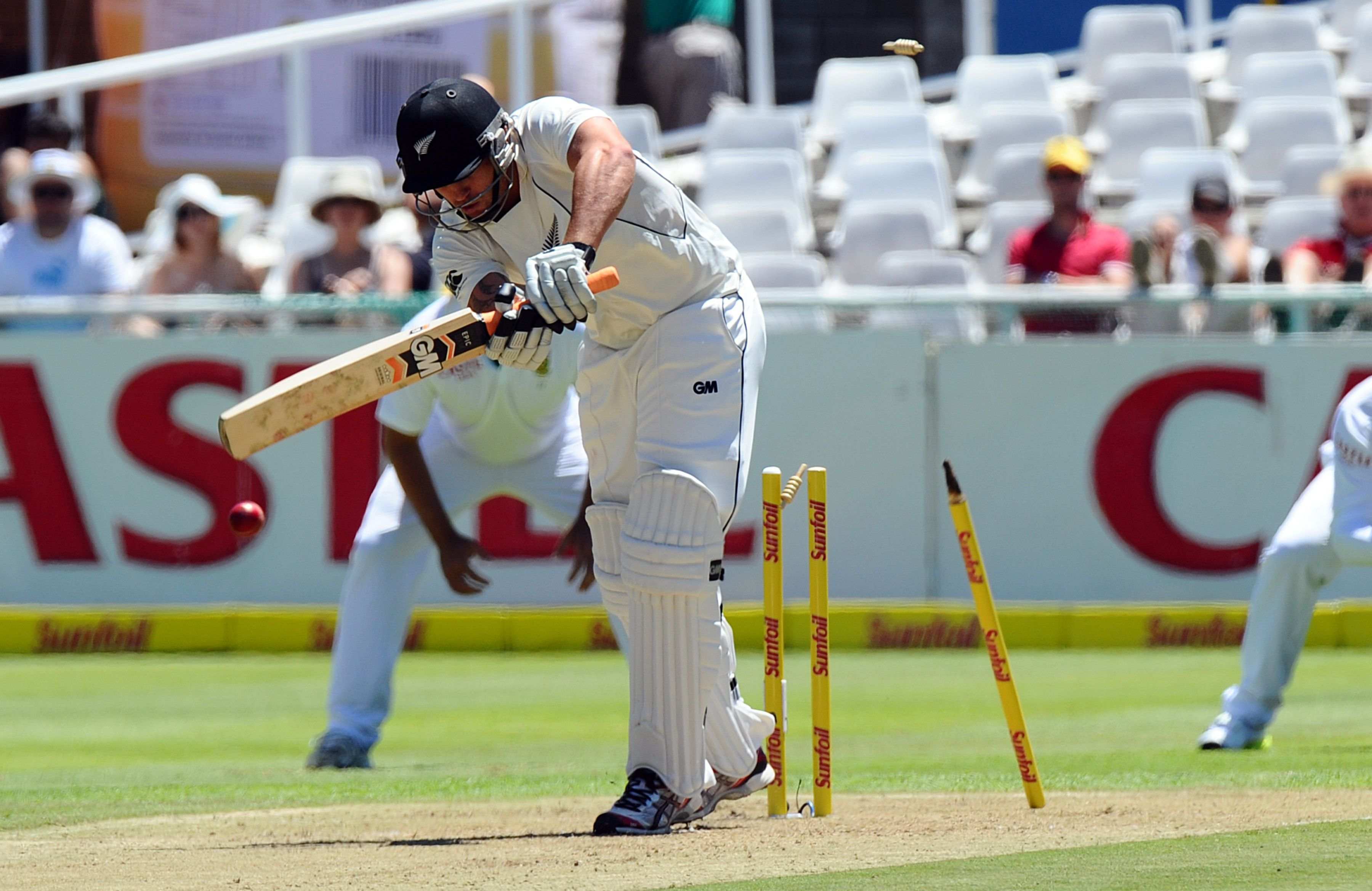 For New Zealand, the situation was more dire. In the lead up to that 2013 Cape Town Test, they had won only five Tests in the preceding three years, two of which were against Zimbabwe. The captaincy baton had moved from Ross Taylor to McCullum under tumultuous circumstances and now the 45 all out was definitely a rock-bottom.

A team meeting was imminent. But in this case, there were no whiteboards or markers, as told by McCullum. Instead, it was an impromptu setup with beers to reach a conclusion. The conclusion was that they were not good enough. Instead of trying to emulate others, they should “personify the traits of New Zealanders - to be humble and hardworking.”

Within the next 13 months, New Zealand had their first big win in Test cricket - beating a strong India team 1-0 at home. McCullum was at the forefront with scores of 224 and 302 in the two-match series. It kick started the renaissance of New Zealand cricket. In 2013, their win percentage in Test cricket was only 16.6. In 2014, they won 55.5% of their Tests. 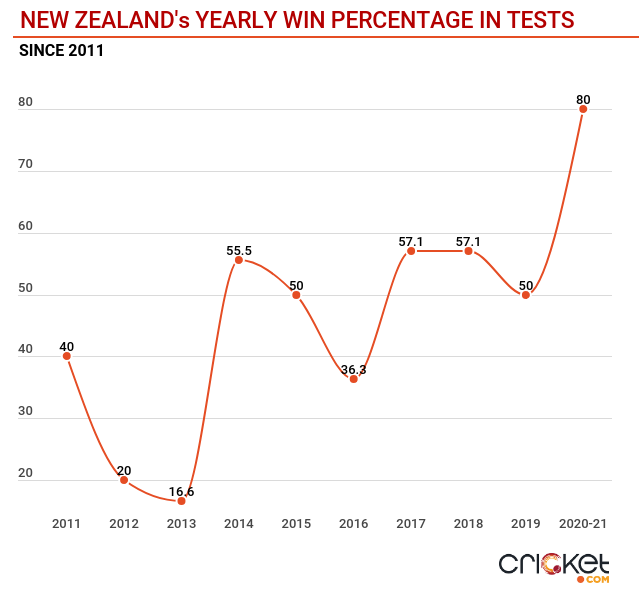 But there was another incident that had a big impact on the way Blackcaps played their cricket. The death of Phil Hughes later that year jolted the cricketing world and New Zealand took a leaf out of the tragic incident.

They were playing Pakistan in the UAE in the only international match going around when the news broke out. It came a few hours before the start of play on Day 2. The play was suspended that day.

Struggling emotionally, the Kiwi team, as advised by the renowned sports psychologist, Gilbert Enoka, took the field on the subsequent days without worrying about what would happen on the field. What transpired? They triggered a collapse in Pakistan’s first innings and bundled them for 351. In response, they plundered 690 runs. McCullum threw caution to the wind and scored a 188-ball 202. New Zealand won by an innings and 80 runs and squared the series. The Test match was an epiphany of what they can achieve if they don’t worry about the consequences.

Moreover, New Zealand celebrated the milestones and wickets in a muted manner. They did not bowl bouncers. They wore their training caps instead of the Test match caps.

"It has to be authentic and it may not last but this is the way I want this team to play," McCullum later said.

For McCullum, “authentic” meant aggression and that trait was seen in copious amounts in New Zealand’s World Cup campaign in 2015. No one accentuated it more than the captain himself. As a fielder, he would dive around in the most extravagant manner. As a captain, he would set aggressive fields. As a batsman, he would hold no mercy. He batted at a strike-rate of 188.5, easily the highest amongst the 22 batsmen with a minimum of 300 runs. 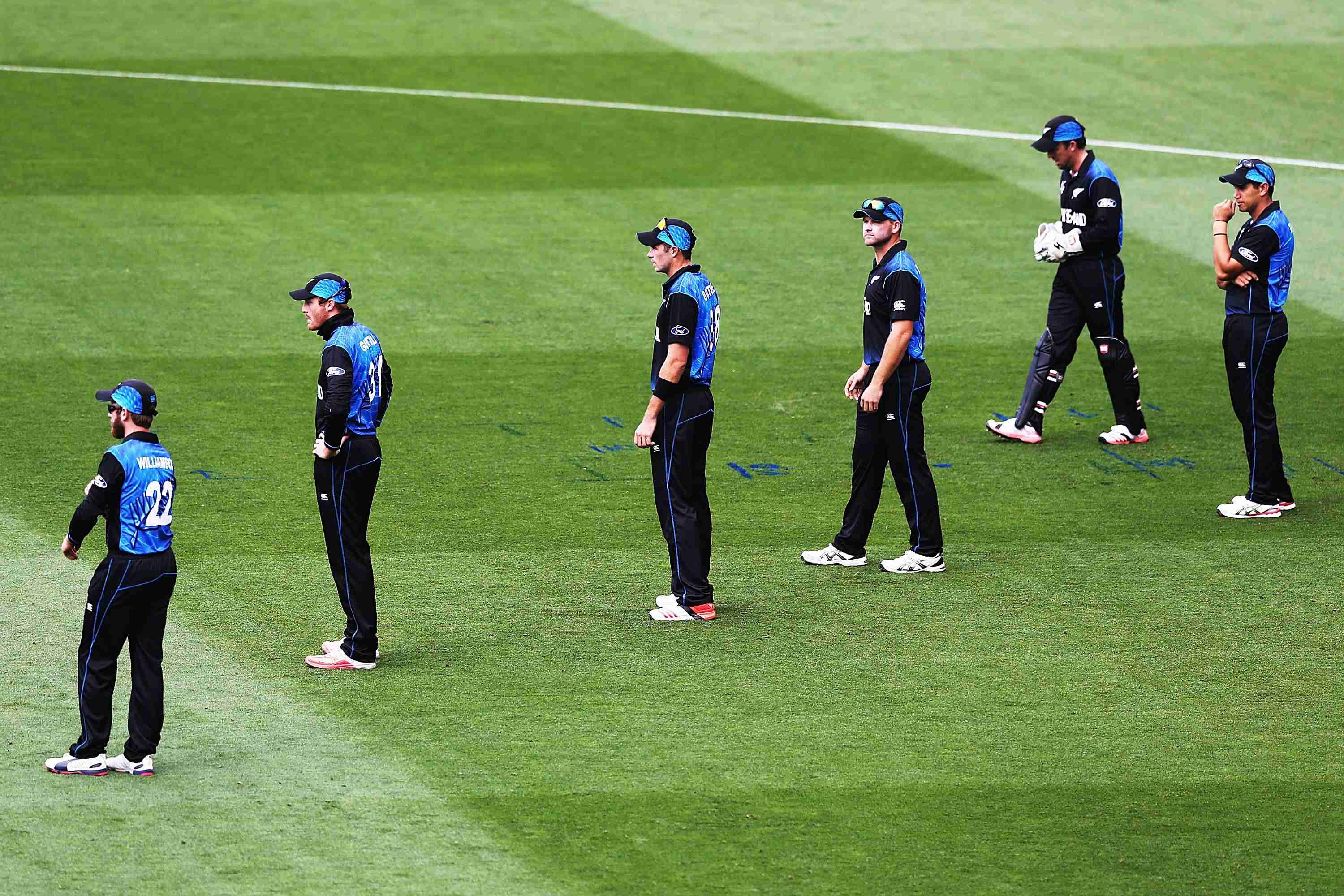 New Zealand bashed their semi-final hurdle to play their maiden World Cup final. They did not win it but cricket narrowed down the gap with rugby as the most popular sport in the country. Across the globe, they became everyone’s favorite team when they gave their South African counterparts a shoulder to cry on after a nerve-wrecking semi-final.

McCullum hung his boots in 2016, passing the captaincy baton to Kane Williamson. Williamson embraced the same principles with which McCullum left. Except, his authentic has been a little different. It is more on the methodical side like his batting and in a similar vein with McCullum, he has led with his modus operandi at the forefront - as it was seen in Southampton.

He also had a World Cup moment leading his side. When his team pushed both England and the cricketing rule book to the edge, the world expected the serenity of Williamson to burst. But he surprised everyone with his beaming smile. What more? He questioned his player-of-the-tournament award. Surely, one cannot be that nice.

It is astonishing how two different personalities have led New Zealand with the same focus - on being the best version of yourself, both on and off the field.

Both McCullum and Williamson’s captaincy tenure coincided with an unprecedented depth in New Zealand cricket. Brick by brick they have covered voids that had obstructed them in the past. 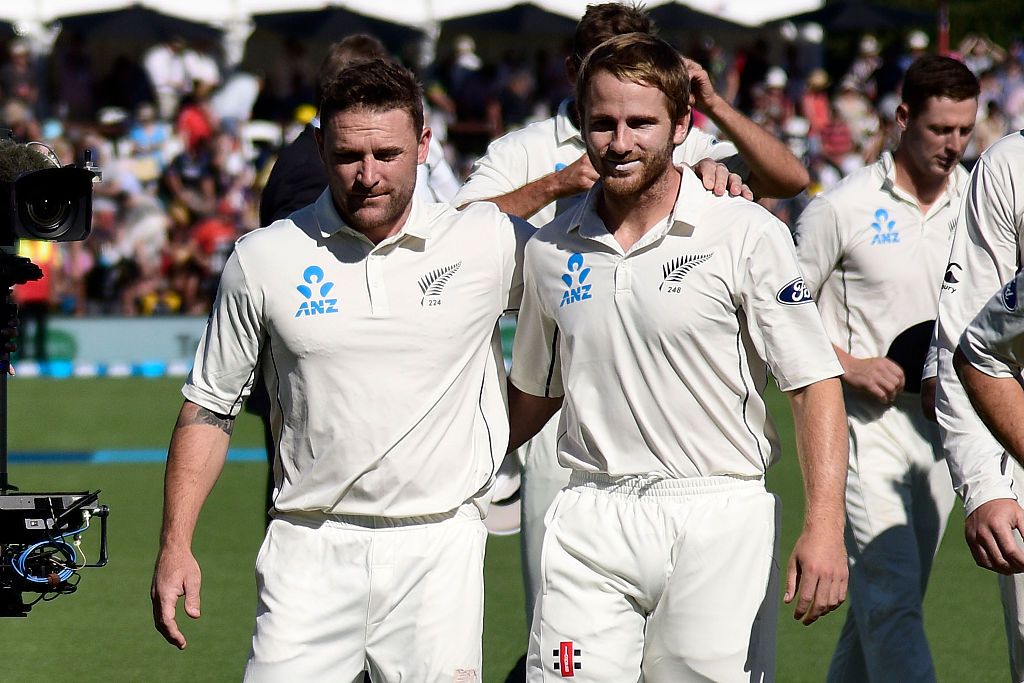 Between 2010 and 2014, New Zealand tried eight opening batsmen with none of them opening throughout. Tom Latham has featured in all 59 Tests for New Zealand since his debut in the Wellington Test in February 2014. Devon Conway has taken to Test cricket like duck to water. BJ Watling established a behemoth of statistics with his glovework and they have Tom Blundell ready to replace him.

The biggest difference was created in bowling. For the longest time, Chris Martin was the only specialist pacer from New Zealand to play over 50 Tests. Now they have three - Tim Southee, Trent Boult & Neil Wagner, playing together. Kyle Jamieson is a welcome addition. Lockie Ferguson is turning out to be a dream fast bowler in white-ball cricket. The effect can be seen in New Zealand’s bowling numbers. Sure the improvement in Test bowling numbers is universal but their bowling average of 26.7 is the third best in the world in this span. 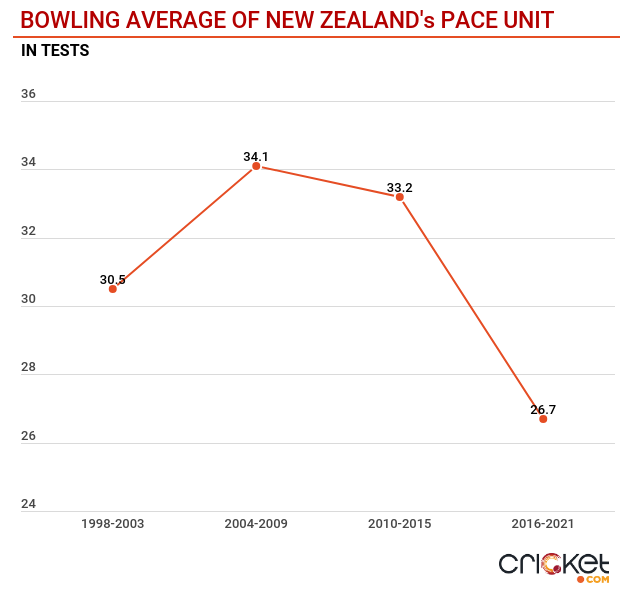 In the 2000s, New Zealand were a group of utility cricketers. Now, such is the depth that Matt Henry could not break into the WTC Final XI after winning the man-of-the-match award in the second Test against England. That match, the Kiwis were without six of their first choice players, yet turned up to win their first Test series in England in this millennium.

What has caused the influx of quality cricketers? “There is a real emphasis for all major associations to strive to produce international quality players. The beauty in NZ though is the cricketing community is quite small and everyone works closely to try to achieve this. It’s had a big impact on players developing and getting opportunities along with significantly producing more player depth across the country,” says Glenn Pocknall, coach of Wellington Firebirds, in conversation with cricket.com.

Pocknall also spoke about the first-class system in the country which is played in two contrasting conditions. "Climate is cold in October-November which makes the pitches offer seam. Back end of season (February-March) climate is better so pitches start harder which brings batsmen, pacers and spinners all into the game. This promotes adaptability in players," he explains.

A culmination of all these ingredients has made New Zealand one of the toughest sides to beat. Probably no other team has produced as many come-from-behind performances as New Zealand have in the past few years. Wellington 2014, Sharjah 2014, Wellington 2015, Wellington 2017, Abu Dhabi 2018, Colombo 2019, the list is long.

At the start of the 2011, Blackcaps were ranked eighth in Tests and seventh in ODIs. They are currently number 1 in both Tests and ODIs and occupy the third spot in T20I rankings. India also had a memorable decade but it is New Zealand’s leap which makes them more prominent.

They have suffered only one series defeat since 2017. Critics can often question that they don’t play at the big boys’ den much, a notorious cry after they were whitewashed 0-3 in Australia last year. But their current tour of England only showed that it is just a matter of not getting enough games there. They dominated England in both the Tests before beating India to clinch the maiden World Test Championship title. 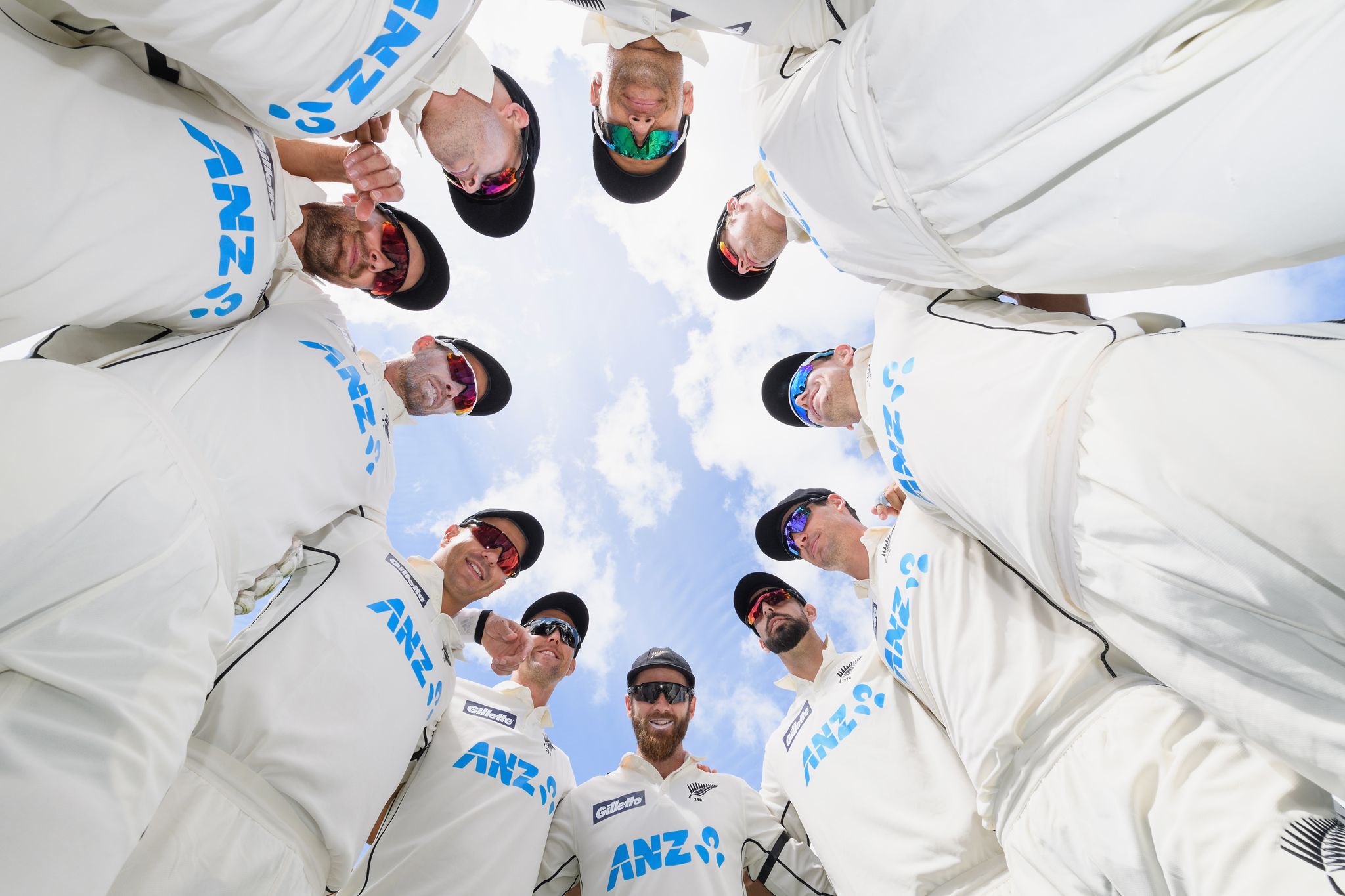 The mace could not have come on a sweeter note. When the winning runs were scored, the men in the middle were the first two names in New Zealand’s all-time Test run-scorers list - Ross Taylor and Kane Williamson. In the dressing room, everyone wrapped around Tim Southee, the most capped bowler of this squad, who became the centre of their celebrations.

It is sweet. It is lovely. It is a tribute to their quality.